Robert Kocharyan was challenged by victims’ families, but said the trial would go down in textbooks as the worst in Armenian history. 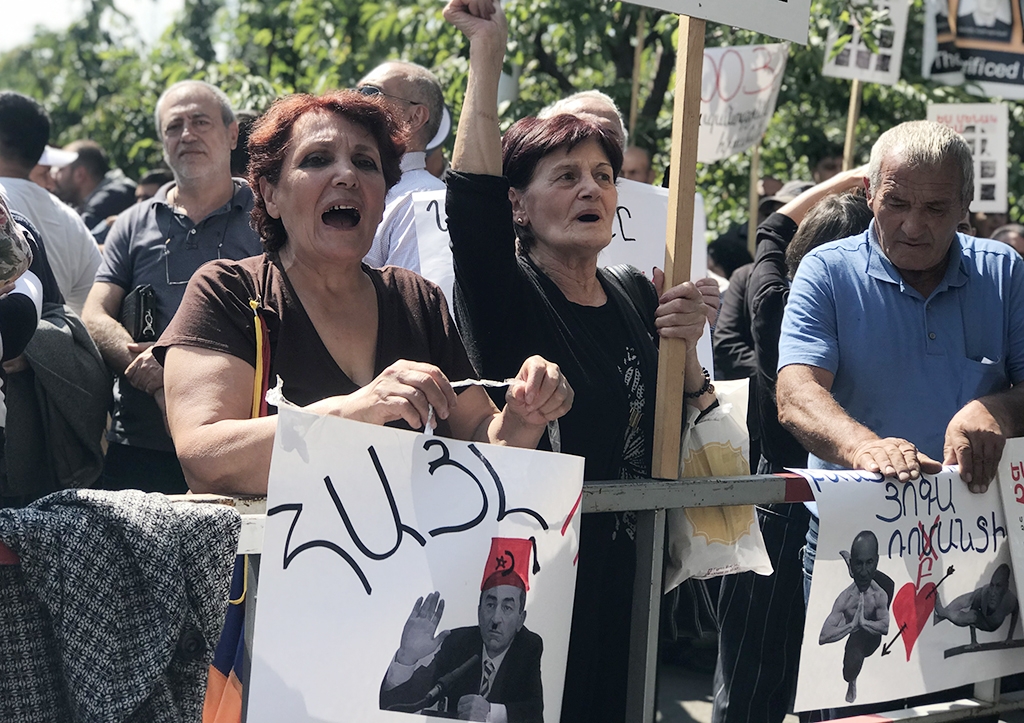 The long-awaited trial of former president of Armenia Robert Kocharyan for his role in the violent breakup of protests in 2008 has begun, with both Kocharyan and relatives of the victims testifying in court.

In a packed courtroom with dozens of spectators and 20 police officers watching over the proceedings, Kocharyan sat in the front row, just feet away from people who blame him for the deaths of their loved ones.

Sargis Qloyan, the father of one of the victims, in his testimony directly addressed Kocharyan, asking him why there was no proper investigation into the events and why no one was arrested. “You are a man, go and serve the full punishment as a man,” Qloyan told the ex-president. The spectators, divided between Kocharyan supporters and opponents, erupted in boos and cheers, respectively.

Kocharyan, for his part, dismissed the entire September 12 proceeding as a politicized vendetta.

“This is the most shameful criminal case in the history of the Republic of Armenia,” he told the judge. “One day it will be documented in schoolbooks and I have no doubt who the anti-hero will be.”

The events of March 1-2, 2008, were one the darkest periods in Armenia’s recent history. Demonstrators gathered in Yerevan to protest elections that they believed were stolen by Kocharyan, then the president, and his ally Serzh Sargsyan, who had just won the vote. Police and military units broke up the protests violently; two policemen and eight protesters were killed.

One of the leaders of the protests was Nikol Pashinyan, then a journalist and opposition politician, who spent nearly two years in prison as a result. But after Pashinyan led protests that toppled Sargsyan’s government last year, and then himself became prime minister, he has placed a priority on punishing the perpetrators.

In court with Kocharyan were several other former top officials who also have been accused in the case: Seyran Ohanyan, the former defense minister; Armen Gevorgyan, the former secretary of the National Security Council; and Yuri Khachaturov, the chief of the Yerevan military garrison during the crackdown.

But all the attention was on Kocharyan, who appeared relaxed in court, wearing a blue suit with no tie and on occasion turning back to smile at the spectators in the courtroom.

Most of the proceedings on the first day of the trial were procedural, dealing with a motion by the defense to release Kocharyan because, as the head of state, he enjoyed immunity from prosecution. The judge said a ruling on that motion would be issued September 17.

The case against Kocharyan has been a touchstone for the struggle between Pashinyan and the judicial system, which is staffed by judges inherited from the former regime and which the current authorities believe remain loyal to them.

The ex-president was first arrested in July 2018, after flying himself from Russia to be questioned as part of the then-new government’s investigation into the March 2008 events. He has since been on a legal odyssey, in and out of jail three times.

In May, after a court ordered Kocharyan to be released, Pashinyan called on his supporters to rally and block the entrances of court buildings, leading many to accuse the prime minister of the same kind of political interference of which he accuses his predecessors.

But the next month, an appeals court ordered that he be arrested again and the Constitutional Court, the country’s highest judicial body, said that it would consider a request from Kocharyan’s legal team to examine whether the charges against him were constitutional. On September 4, that court ruled that Kocharyan’s arrest was unconstitutional, but he remained in jail.

Throughout, Russia has regularly signaled its disapproval of the process. Last summer, Foreign Minister Sergey Lavrov said the proceedings against Kocharyan “can not not concern us.” And Russian President Vladimir Putin has twice pointedly sent warm, public birthday greetings to his embattled former counterpart, most recently less than two weeks ago.

Outside the courtroom, the scene was chaotic, as more supporters and opponents gathered with megaphones, and music. Kocharyan opponents carried signs reading “Life Sentence for Rob,” and depicting him in a Turkish fez with a hammer and sickle.

“I was a participant in those events [of 2008] and brutally beaten by police,” one, Arus Hovhannisyan, told Eurasianet.

Another, Henrik Hartanyan, said he believed the courts were biased in favor of the former authorities. “This has been going on for too long,” he said. “I can’t talk about my expectations, since no one trusts the courts.” 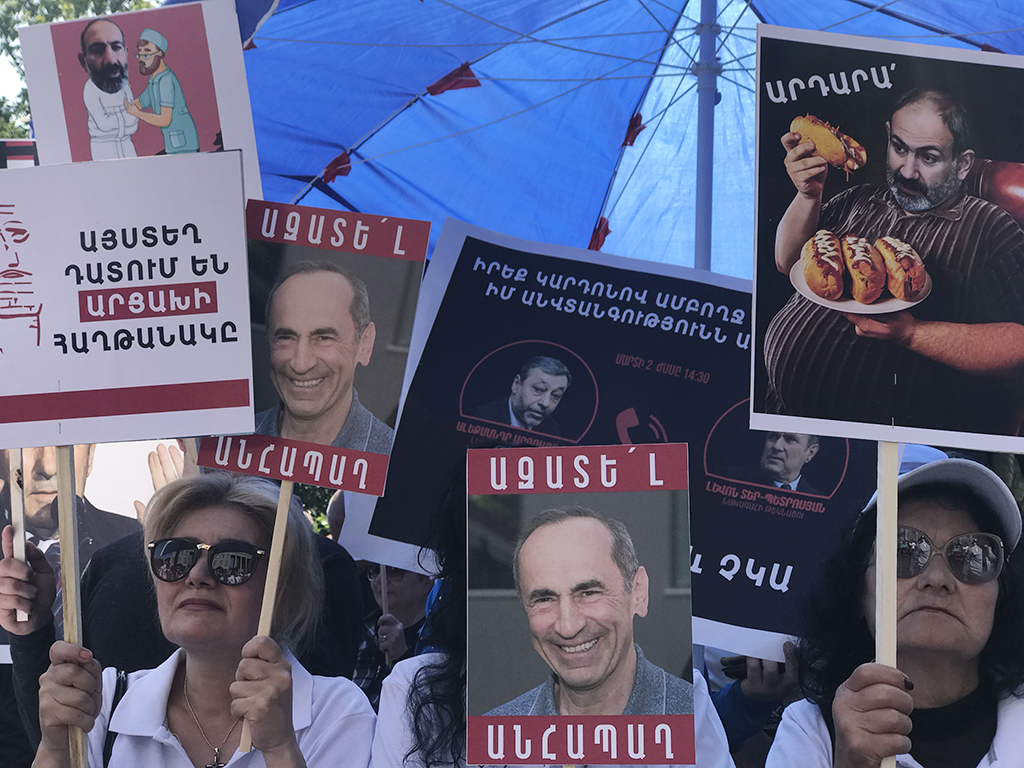 The Kocharyan supporters had signs reading “Freedom” and depicting Pashinyan with an exaggerated paunch, gorging on hot dogs. “We want justice for Kocharyan,” said one, Mikael Aghajanyan, who said he was confident the former president would be released. “None of these charges have any basis. If they had any proof he would have been in prison a long time ago.”

Following the hearing there was a clash between the two sides; witnesses said that some of the Kocharyan supporters attacked his opponents. Several were taken to the police station and one man was taken to the hospital.