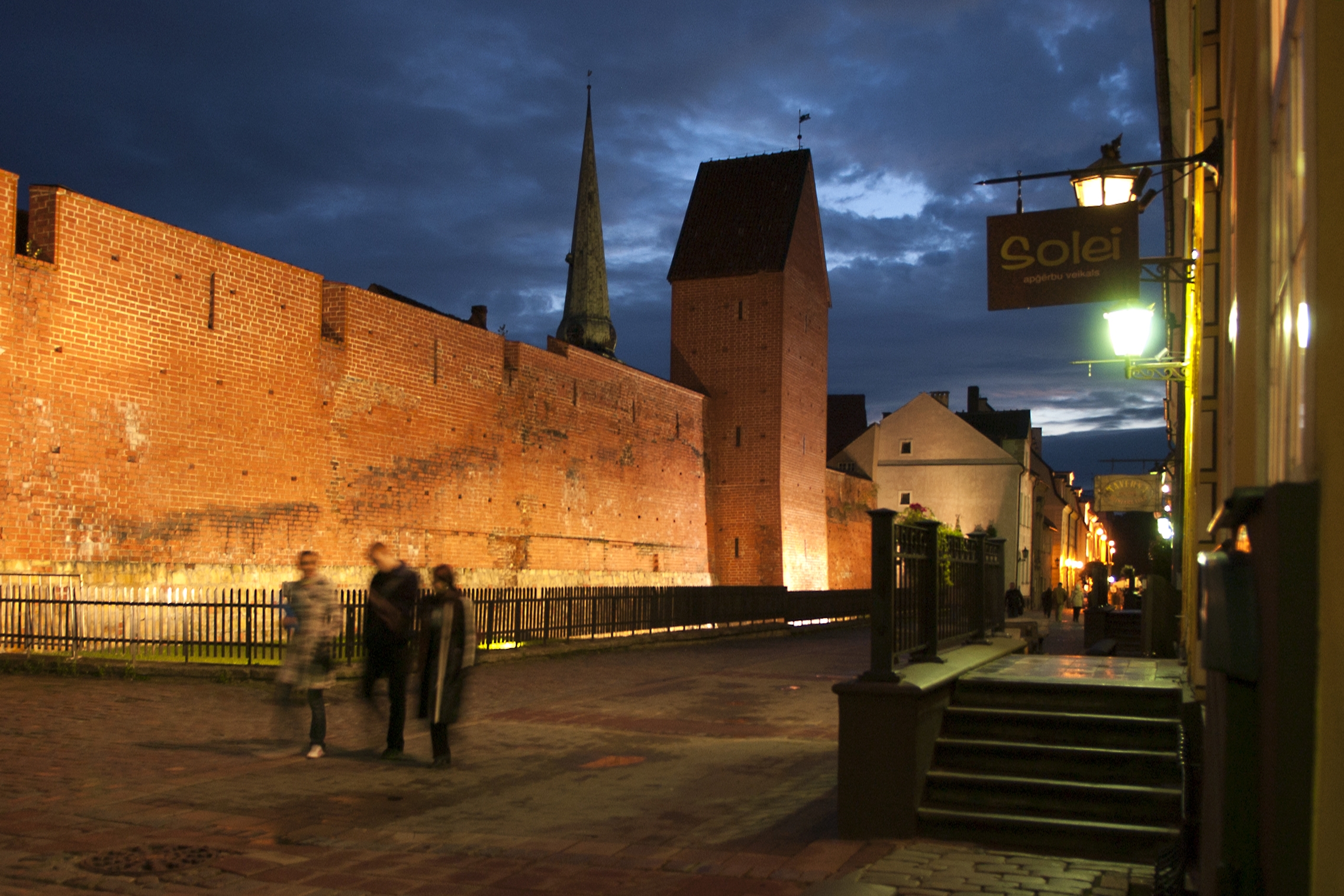 Pedestrians wander through Riga’s Old Town, Vecriga, the heart of the Latvian capital, where Western values of tolerance and openness appear to be getting shouldered aside by more “traditional values” that closely mirror the social agenda of Russian President Vladimir Putin. (Photo: Dean C.K. Cox)

A version of this article originally appeared on Re:Baltica.

Municipal officials in the Latvian capital Riga last fall quietly decided to remove citywide public-service billboards that promoted tolerance. A factor in the removal was that some civic groups did not like the fact that gays were among the groups of citizens that the billboard campaign said were deserving of a greater level of acceptance.

The incident underscores the creeping influence of organizations in Latvia espousing “traditional values.” Although small in scale, and operating apparently on shoestring budgets, these groups have been increasingly successful in pressing a broad conservative social agenda, central pillars of which are opposition to abortion and gay rights.

The aims of these groups closely mimic the social agenda of Russian leader Vladimir Putin, and seek to roll back what they perceive as the pernicious influence of Western values. Their activities highlight how Latvia, a European Union member, straddles the fault line of a spreading cultural divide in Europe that challenges some of the underlying tenets of Western-style democracy.

Support for “traditional values” in Latvia brings together otherwise politically disparate segments of society, namely Latvian nationalist elements and Moscow-leaning Russian speakers. The unifying belief is the sanctity of the traditional family unit, combined with fear that ideas emanating from abroad, coming mainly from Brussels and Washington, threaten to turn long-held concepts about what constitutes a stable and prosperous family on their head.

Among the most prominent “traditional values” organizations are Asociācija Ģimene (the public association “Family”), Mūsu bērnu (Our Children) and Dzimta (Kin). Family and Our Children appear to have a division of labor organized along linguistic lines. Family is oriented toward Latvian speakers and has established strong ties with the National Alliance, a right-wing political party that is part of the current governing coalition. Our Children, meanwhile, focuses its efforts on Latvia’s substantial Russian minority, which constitutes roughly a quarter of the country’s overall population. It also has a close connection to the left-wing Harmony Party, which controls the Riga city government and is widely seen as the main political force for Russian speakers in Latvia.

Smaller groups are also emerging in the traditional values realm, including Sargāsim mūsu bērnus! (Let's Protect Our Children!). Activists associated with these groups speak in dark terms about the influx of Western beliefs and practices. For example, a co-leader of Kin, Saulus Seikis, a boxing coach, believes Western values strive to turn people into “vegetables.”

Jelena Kornetova, the other co-leader of Kin, decries what she sees as the excessive intrusion of the state into family affairs. This is particularly the case when it comes to the use of corporal punishment within the family unit. She believes that a parent has a right to “slap a child on the bottom” as a form of discipline if it is done with “good intentions.”

“There is a distinction between the violence that is needed for a child’s instruction and when it is a form of abuse. They are completely different things,” she said.

Groups like Kin and Our Children are critical of state agencies in Latvia that have intervened in some situations to remove children from what social workers have deemed harmful domestic environments. The founder of Our Children, Alla Sprisevska, characterized such interventions a form of “juvenile fascism.” Sprisevska’s phrasing is evocative of Kremlin propaganda, which routinely portrays its political enemies in Ukraine and elsewhere as “fascists.”

The messages being promoted by Family and other like-minded groups did not start gaining traction until 2013, the same year when Russia adopted legislation banning “homosexual” propaganda and the Kremlin began to aggressively promote traditional values as part of a broader political confrontation with its old Cold War foes, the United States and EU states. It was around that time that other groups dedicated to combating Western ideas took root.

One of the new organizations, Let’s Protect Our Children, spearheaded a petition drive to hold a referendum that sought to ban “gay propaganda” in Latvia along the lines of the Russian legislation. The drive garnered almost half of the necessary 30,000 signatures before hitting a roadblock. Ethnic Latvians lost interest in the measure when it turned out that a controversial pro-Kremlin political activist, Vladimir Linderman, was involved in the referendum drive.

In recent months, traditional-values campaigners have registered small successes, highlighted by the removal of the tolerance billboards in Riga. More broadly, Our Children, working in conjunction with the Harmony faction in parliament, successfully lobbied for amendments to education legislation that prohibit the use of “immoral” educational materials in schools. The amendments, which went into effect during the summer of 2015, seem to have had a chilling effect on teachers. In one prominent example, administrators at a prestigious Riga school reprimanded a literature teacher who had students read and analyze a poem by a modern Latvian poet that contained salty language. Another school’s principal forbade showing to a high school senior class the film “Total Eclipse” about the French poet Arthur Rimbaud, who was gay. The move came after a parent of a child at the school expressed a concern that it was “promoting pederasty, rape, alcoholism, and drug addiction.”

While the legislation has already been in place for just about half of the academic year, the government is still working on guidelines that would define what constitutes “immoral” content in teaching materials. Representatives of Family and Kin are participating in the working group that is developing the new standards under the Ministry of Education’s auspices.

While Family, Our Children and other groups espouse social attitudes that are closely aligned with the Kremlin’s, there is no publicly available evidence that Russia is providing financial support to Latvian organizations. But as Linderman’s involvement with the 2013 referendum initiative indicates, there appears to be at least some element of behind-the-scenes organization coordination.

Many American and EU officials suspect Russia of surreptitiously funneling funds to non-governmental activists and political leaders in the West who promote traditional values. According to recently published news accounts, the US government is undertaking a survey of Russia’s clandestine activity to influence some political parties in the West.

If nothing else, state-influenced Russian media outlets have played an important role in spreading the messages of relatively small groups, such as Our Children. A key aspect of the traditional-values media strategy is the manipulation of facts and statements to create misbegotten memes that spread in the public consciousness. One such false meme is that incest is a widely practiced tradition in Norway.

For instance, last fall, the MK-Latvia newspaper published an article titled “Democracy That Stinks of Pedophilia,” in which a prominent children’s doctor, Peteris Klava, is quoted as saying that Norway has introduced “a special lesson in elementary school, devoted to incest. It is a norm for them.” The article goes on to claim that Norway’s minister of children, equality and social inclusion, Inga Marte Thorkildsen, described incest as a social tradition.

When queried about whether she was aware of the claim in the MK-Latvia, Thorkildsen responded via email: “I am really shocked about your revelation. It would be terrible if I said or thought something like that.”

“What I’ve said is this: There is an urgent need in Norway to inform children of what is normal and what isn’t. A lot of those growing up in abusive families report that they spent many years thinking it was normal, and something parents or other family members had the right to do to their children.”

Misrepresentations in the Russian-language press, such as the MK-Latvia report containing the Klava comments, can quickly gain currency among the general public. According to a recent survey, print media remains widely popular in Latvia, with 83 percent of Latvians reading printed publications, including newspapers and magazines, on a regular basis. MK-Latvia just happens to be the most widely read newspaper in the country.

Inga Spriņģe is an investigative journalist based in Riga. A version of this article originally appeared on Re:Baltica (www.rebaltica.lv/en)