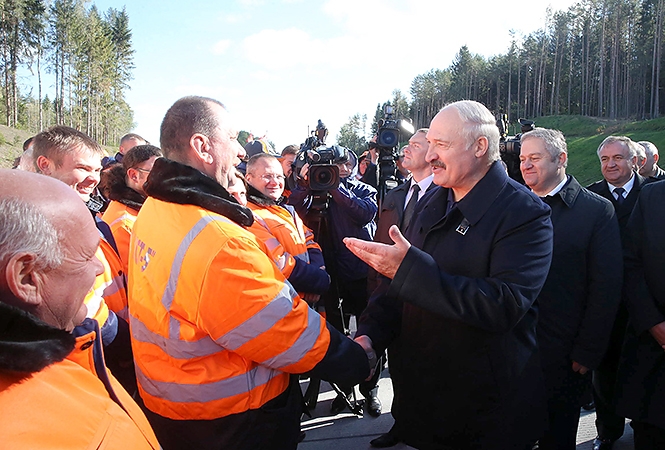 Alexander Lukashenko, president of Belarus, meets road workers at an event where he denied plans to allow a Russian air base in the country. (photo: president.gov.by)

Belarusian President Alexander Lukashenko spoke out strongly against the establishment of a Russian air base in his country, less than a month after Russian officials presented it as a done deal. The extensive comments throw a significant wrench into the negotiations over the base, which have been going on for at least two years.

Lukashenko faces an election Sunday and so he's on the hustings, and at a campaign event in Minsk he addressed the issue of the base. "Talks about establishing a Russian air base on the territory of Belarus have never been conducted," he said, addressing road workers at the opening of a new ring road in Minsk. "I don't know anything about it."

For others who haven't heard anything about the base, either: Russian officials have been publicly talking about it for two years. Russian President Vladimir Putin "signed an instruction on signing an agreement" between the two countries on the base on September 18. Some days before that, the Russian government published a draft of the base agreement that they said had been "preliminarily worked out" with Belarus.

Reuters reported after Putin's statement: "The plan is not expected to face major obstacles." Reuters did also note, however in the same piece that Belarus was "unpredictable." Lukashenko set out to demonstrate that on Tuesday.

"We don't need a base now," he said. "We need airplanes, not a base. We have wonderful pilots, we have a good school for military and civilian pilots. Why would we create a base? Why would I bring here planes and pilots from other states? What would ours do?"

Lukashenko's geopolitical interpretation of the (supposedly false) news of the base is curious. He suggests that it may be a scheme to spoil Belarus's slow rapprochment with Western countries. "I've never had talks on that [the base] with anyone. It simply surprises me, and to a degree even disturbs and offends me. Why would this be put out to the Russians in the media today? Maybe they're worried that we are really leaving for the West, and want us to drop this idea, for the West to start to ask us or doubt whether we want to normalize relations with them?"

But he also took pains to suggest that Belarus's ties with Russia were so strong as to render the base unnecessary. "We're not alone against NATO, we stand here together with Russia. We have a concrete plan even in the case of war, how we should act. Of course we won't publicize it, it's an absolutely secret plan, but in that direction the main force is the Belarusian army. If there is a conflict, then Russia will support us with the appropriate manpower, armed forces, aircraft, helicopters and so on."

Two days earlier, on Sunday, around 1,000 people protested in Minsk against the Russian base. Lukashenko is guaranteed to win the upcoming elections, but the timing of his broadside against the base suggests that he is in some fashion concerned about public opinion being against the base.