Armenia's advocates in Washington are pushing for closer ties with the U.S., and arguing that a meeting between Trump and Pashinyan will help. 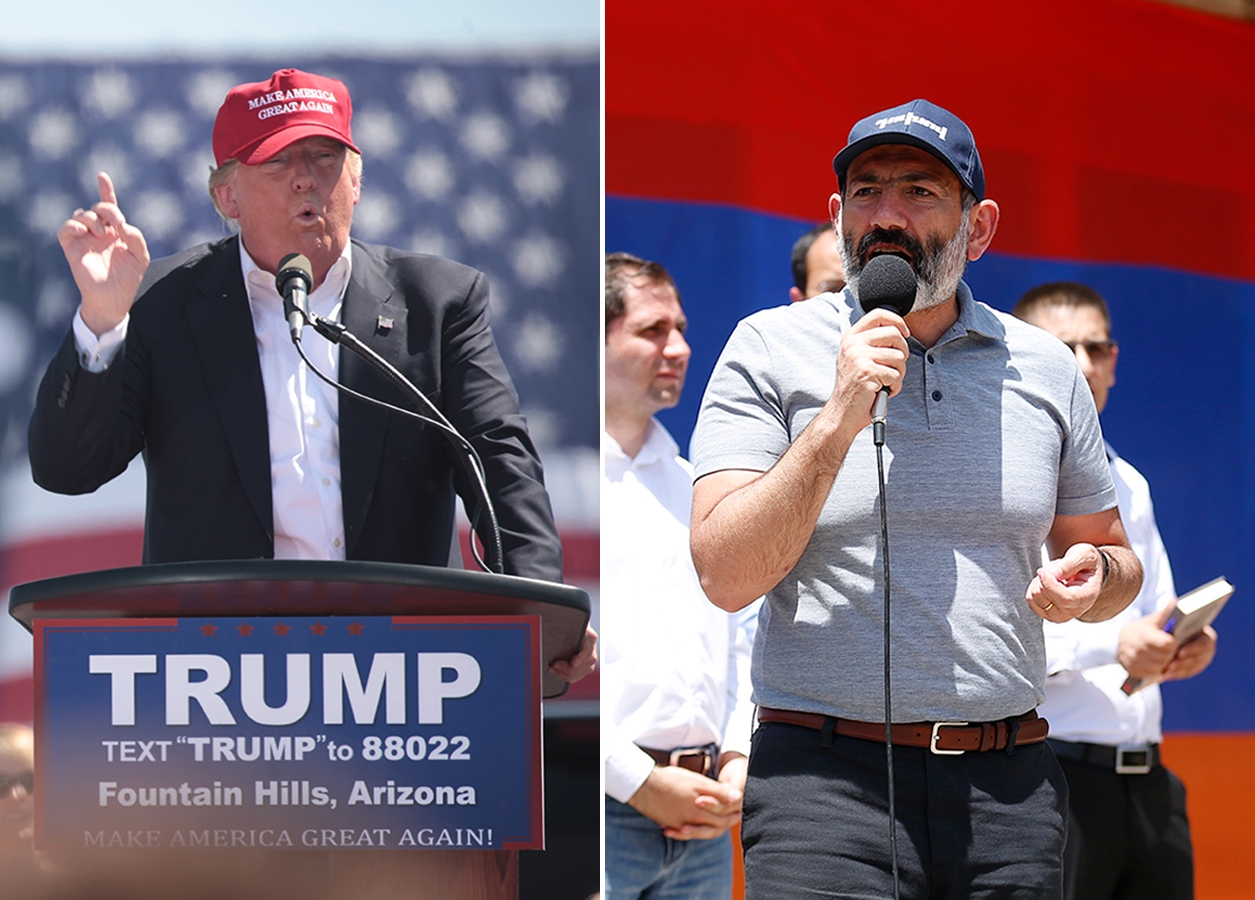 If these hats could talk. (Photos: primeminister.am/Gage Skidmore via Flickr)

That is the hope of Armenia's new leadership and the country's American advocates, who have launched an effort to get Pashinyan some one-on-one time with Trump.

Other than their signature baseball caps – Trump's “Make America Great Again,” and Pashinyan's “Dukhov” – and a penchant for self-promotion, there would seem little common ground between the two men. Pashinyan is a former opposition journalist who was brought to power on a wave of street protests; Trump generally prefers the company of strongmen like Russian President Vladimir Putin and – until recently – Turkish President Recep Tayyip Erdoğan.

On July 30, 48 members of Congress sent a letter to Trump asking him to meet with Pashinyan while the latter is in New York for the United Nations General Assembly in September. The letter further called for greater contacts at the ministerial level.

“We believe that the peaceful protests witnessed during the Velvet Revolution can be a model for nations seeking democracy around the world,” the members of Congress wrote in the letter, which also highlighted Pashinyan’s credentials as “a former newspaper editor and political prisoner.” The address was bipartisan, featuring signatures from close Trump allies like Representative Devin Nunes, a Republican, and some his harshest critics, such as Democratic Representative Adam Schiff.

On June 29, Armenia President Armen Sarkissian, whose position is largely symbolic, met with Secretary of State Mike Pompeo. In the meeting, Sarkissian told Pompeo of “the readiness of the 'New Armenia' to continue to strengthen the relations with the United States,” according to a release from Sarkissian's office. Some Armenian commentators saw the visit as a breakthrough: “At a minimum, he [Sarkissian] is a global Armenian super lobbyist,” wrote Yerevan-based political scientist Areg Galstyan in a Facebook post.

It's not clear what of substance came from the meeting. “In terms of the vibe and energy, it’s been very positive,” said one senior executive at a U.S. advocacy organization working on bettering ties with Armenia, speaking with Eurasianet on condition of anonymity. “In terms of tangible results, not so much.”

Mirzoyan was clearly mindful of antagonizing Russia, Armenia's nominal ally, which has expressed concern about several of the new Armenian leadership's moves, in particular the arrests of several members of the old regime who were close to Russia.

In an interview with the Voice of America Armenian service, Mirzoyan dismissed as “merely a stereotype” the idea “that the democratic state must be pro-Western, while less progressive regimes are leaning towards the other centers [of power].”

Analysts and lobbyists interviewed by Eurasianet said that while the image of Armenia's new leadership appeals to American policymakers, that has yet to translate into any tangible results.

“Governments tend to move slowly, and at this point I do not see much evidence of a big change in the level of cooperation, which was already considerable,” John M. Evans, the U.S. ambassador to Armenia from 2004-2006, told Eurasianet.

“There has been a positive impact from a bloodless revolution, and it keeps building momentum,” said the executive, who was involved in preparing the letter to Trump. “In meetings with members of Congress, Armenia’s civic awakening is front and center of our talking points.”

Ambassador Evans was less optimistic: “I would not wish to overstate the degree to which the American perception of Armenia has changed as a result of the changes that have taken place recently, because the perception was already positive on the whole,” he said.

The White House thus far has not commented on the possibility of a Pashinyan meeting, and opinions are mixed on the likelihood of it happening. “I’m pretty hopeful that it will happen, whether it’s New York or Washington,” the executive said.

But Gregory Aftandilian, a former U.S. State Department official and foreign policy advisor to a number of members of Congress, said that a Pashinyan meeting is far from the top of Trump’s agenda.

“I don’t see that happening very soon. [...] Maybe a visit can take place next year,” said Aftandilian, who also sits on the academic board of Policy Forum Armenia, a Washington, D.C.-based think tank.

A recent crisis in U.S.-Turkey relations may give an impetus to greater U.S.-Armenia ties. Amid the crisis, “the United States has an opportunity to cement ties with Armenia, one of Turkey's chief diplomatic rivals,” wrote the Trump-friendly website Washington Free Beacon.

The website cited a “former Trump administration official” arguing for a deeper embrace of Yerevan: “At the very moment Turkey is turning away from the U.S. and our national interests abroad, Armenia is doing everything in its power to extend the olive branch and establish an even closer relationship with America,” the source reportedly said. “President Trump should embrace that and not back down in the face of Erdogan […].”

Other than a Trump-Pashinyan meeting, the top item on the agenda for Armenia's backers in the U.S. is to reverse a recent decision by the Millennium Challenge Corporation, an American foreign aid program, to suspend $140 million in funding to improve science education in Armenian schools.

The decision was made as a result of the World Bank’s recent ranking of Armenia as an “upper middle income” country, while the MCC helps only lower and middle-income nations. “We’re working with our friends in Congress to see if Armenia can get a pass on this specific criteria,” the advocacy group executive said. Pompeo, for his part, has expressed support for Armenia's position on the MCC grant.

The executive said that if Armenia receives the grant, it would be an indication of the new administration's ability to achieve foreign policy goals. But he also indirectly criticized the unrealistic expectations the new leadership has shown in its dealings with the West.

“No administration should automatically expect dividends from various countries for what happened on the ground – one needs to apply for this in a proper manner,” the executive said. “There’s a process when you’re applying for Western funds. You need to play the game. Nothing is automatic in this world.”

Europe to pay Armenia €3m to rebrand its 'cognac'