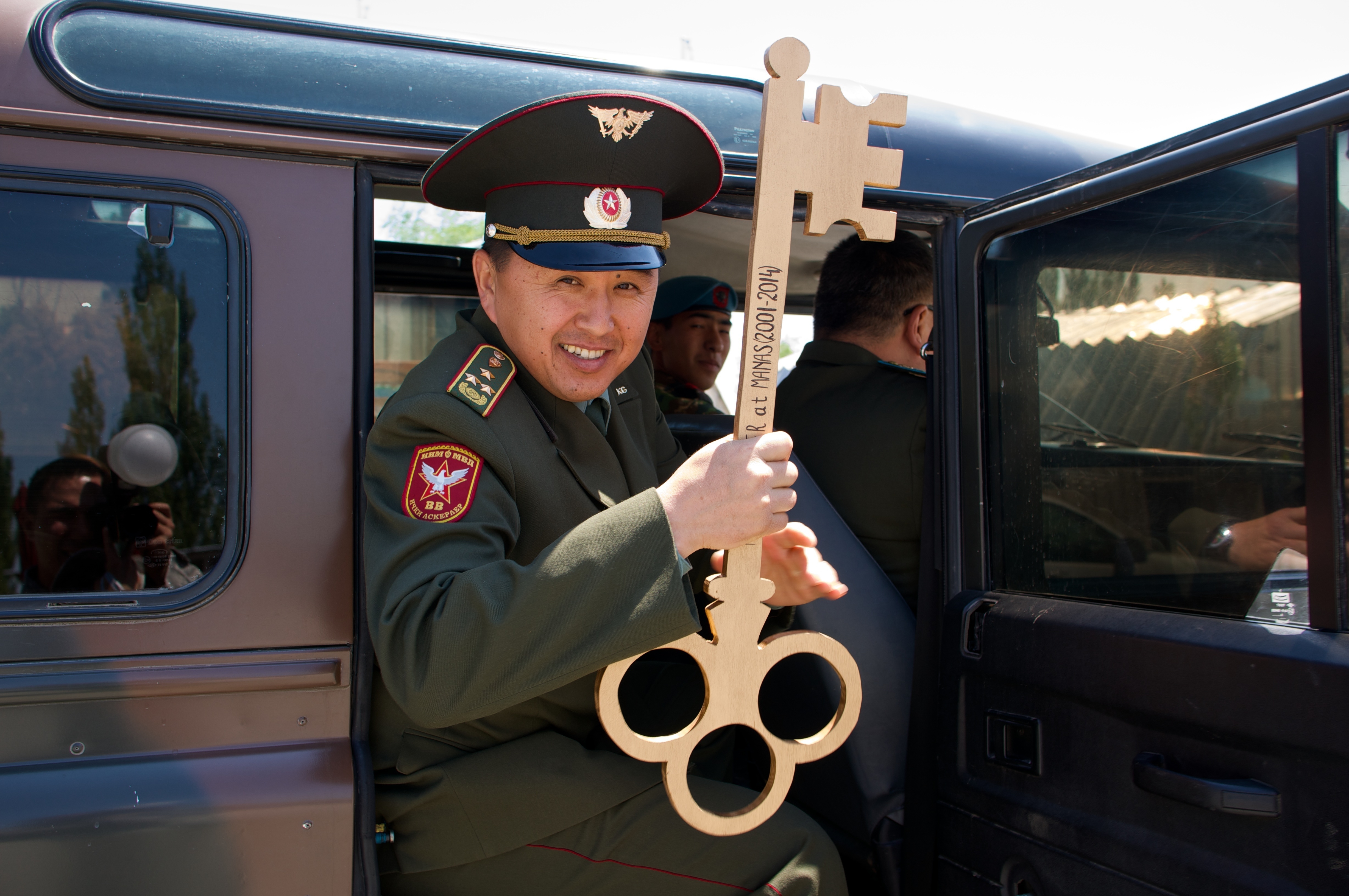 Col. Mirbek Imayev, chief of staff of the Kyrgyz National Guard, with a symbolic key he received from U.S. officers at the formal closure of the Manas air base. (photo: Capt. Cory OBrien, 376th Air Expeditionary Wing)

As the United States shuts down its air base in Kyrgyzstan, people in the region are assessing the legacy of 12 years of American military presence in the country. And for the most part, the conclusion is: good riddance.

The reaction in Kyrgyzstan was muted, said Russian newspaper Nezavisimaya Gazeta. "The news portals of Kyrgyzstan were silent about the news that caused such a lively reaction in Russia. It was as if there had not been 12 and a half years of the presence of a foreign army, painful incidents, corruption scandals and the 'strengthening of American-Kyrgyzstani friendship.'" (Scare quotes as in original.)

And indeed, according to an informal press review conducted by The Bug Pit, there did seem to be more commentary on the closure coming from Russia than from Kyrgyzstan itself. Russian website Lenta.ru ran an interview with Kyrgyzstan analyst Toktogul Kakchekeev, who described the base in thoroughly negative terms. He said that former president Askar Akaev allowed the establishment of the base as a "PR move ... so that Kyrgyzstan could be called an island of democracy in Central Asia. But the people wanted to be together with Russia."

One of the key questions surrounding the base has been how its contribution to the government budget of Kyrgyzstan -- in total, more than $200 million a year -- can be replaced. Kakchekeev expressed confidence that Kyrgyzstan's upcoming accession to the Eurasian Union will solve that problem. "The creation of the economic union -- this is exactly the right solution to make up the money lost from the departure of the air base." And he noted Russia's promise of $1.2 billion in aid to help Kyrgyzstan in its accession. He also repeated the conspiracy theory that as the airmen leave Manas, intelligence officers are staying to staff a new, underground surveillance facility run out of the U.S. embassy. (Lenta.ru even links to a Bug Pit post about the conspiracy theory as if it were confirmation of that theory...) And he added an interesting wrinkle:

The Americans... were testing armored artillery rocket technology in mountainous locations. Small arms, helicopter technology. And I think they put more than a million soldiers in Afghanistan to have tactics for mountain warfare and, correspondingly, make corrections for future wars in analogous terrains in other countries. Who has this terrain? Latin America, the Caucasus, China, India, and Central Asia. I think that through this program they were preparing for likely future wars or military operations in analogous situations. So I think that they completed this part of the program about which, in general, they didn't speak."

The Russian website Odnako also repeated the surveillance center theory: "Manas is not fully leaving. Its surveillance component, by the rules of the genre, has to stay together with its equipment and specialists. Otherwise you would have to think that the U.S. is constructing new buildings at the embassy for the sake of holding social events and children's holidays." Another common theme was that the U.S. isn't really "leaving" Kyrgyzstan, because its army of NGOs remains. One expert, Bishkek-based Grigory Mikhailov, told Tass Analytics: "For the U.S., leaving the air base is somewhat unpleasant, but it still maintains other levers: its large and effective network of NGOs in the region (from 5-15,000 according to various estimates). 'These are people who get money from the American budget and work with it." And Pravda added: "One can't say that Kyrgyzstan will no longer be the object of Washington's criminal adventurism. The U.S. will continue to exert considerable influence on Bishkek -- both economic and political -- through its intricate network of NGOs, financed from abroad."

Some of this is easy to poke fun of, but the pieces also mentioned less conspiratorial explanations of the base's unpopularity in Kyrgyzstan: in particular, the corruption of two successive presidential administrations through shady fuel contracts to supply the base.

And there seemed to be few voices from Kyrgyzstan defending the base's legacy -- except for the ones the U.S. government was paying. Azzatyk (the local branch of Radio Free Europe/Radio Liberty) wrote: "Did we demonstrate our hospitality with respect to the country, which in the beginning of the 1990s, in difficult times gave us millions in humanitarian aid and interest-free loans for billions of dollars via international financial institutions, grants for millions of dollars? In other words, did we manage to demonstrate a high form of diplomacy, to show that we are wise, if poor and small people?"

Another U.S.-funded outlet, the CENTCOM-run Central Asia Online, took a different tack: it didn't mention the base closure at all. In fact, according to a search of its archives, it hasn't mentioned the base since 2009. That's particularly striking since its primary mission is ostensibly to "highlight movement toward greater regional stability both through bilateral and multilateral cooperative arrangements." One would think that if there were any bilateral cooperative arrangement helping move toward greater regional stability, it would be Manas. But maybe they've decided that, as the saying goes, no news is good news.