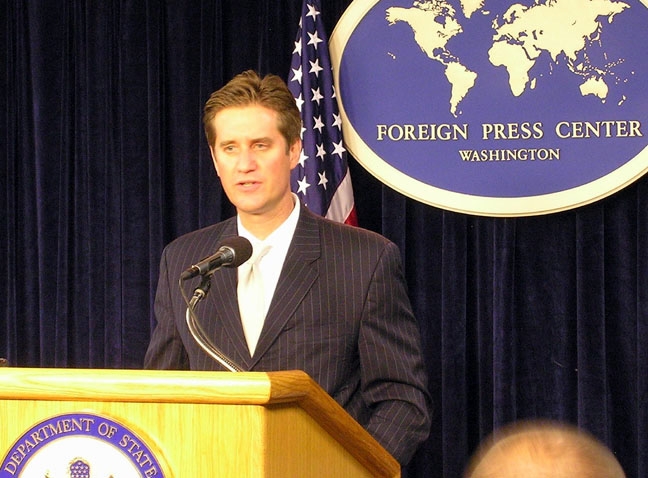 The White House has appointed US diplomat Matthew Bryza, a former American co-chair for the Nagorno-Karabakh conflict resolution talks, as its new ambassador to Azerbaijan, EurasiaNet.org has learned.

A diplomat from the US embassy in Baku who asked not to be named stated that an official announcement will be published on the White House’s website on May 21.
The Azerbaijani government issued its official consent to the appointment on May 20, the source said.

Bryza, whose appointment to Baku has long been the source of considerable speculation, has a near-22-year-long diplomatic career that put him at the center of two of the South Caucasus’ most strategic issues: resolution of the Nagorno-Karabakh conflict and the introduction of non-Russia-related oil and gas pipelines from Baku to the Black Sea.

As deputy assistant secretary of state for European and Eurasian affairs from 2005 to 2009, Bryza coordinated US energy policy in the Black and Caspian Sea regions, and represented the US on the Organization for Security and Cooperation in Europe’s Minsk Group talks on a resolution of Azerbaijan’s 22-year conflict with Armenia over the breakaway region of Nagorno Karabakh.

Under US President Bill Clinton, he served as a deputy advisor on Caspian Sea energy diplomacy and worked on US government efforts to develop a network of oil and gas pipelines in the region.

Bryza’s appointment must be confirmed by the US Senate, where he is likely to face questioning about his actions leading up to the 2008 Georgia-Russia War, a conflict that some critics charge was prompted by a Georgian misunderstanding of American readiness to intervene.

The absence of a US ambassador to Baku – the post has been vacant for almost a year -- has been cited previously as a source of irritation for some Azerbaijani officials, who allegedly saw it as a slight of President Ilham Aliyev’s government amidst American promotion of a Turkish-Armenian rapprochement.  With Bryza’s appointment, Washington is sending a “positive signal” that it is ready to smooth over relations with Azerbaijan, Elkhan Shahingolu, director of the Baku-based Atlas think-tank, believes.

“They were in touch with him for a long time, they know his character and see him as a good specialist on the region,” commented Shahingolu.  “So why not to be happy?”