Many of the biggest media in the country continue to be owned by people connected to the former regime. And they have been coming under pressure. 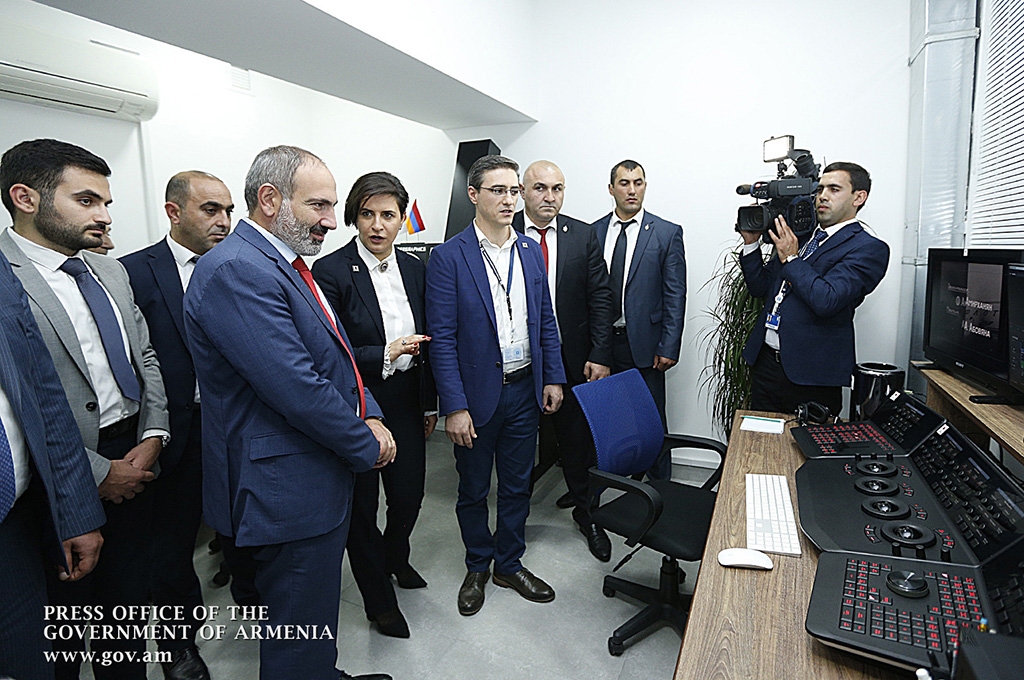 In early October, a group of young men attacked the Yerevan office of the news website Hayeli.am, throwing eggs at it in retaliation for what they said was an “anti-Armenian” headline attacking Prime Minister Nikol Pashinyan.

The incident became the talk of Armenia’s political class, with most lining up against the eggers. Government opponents saw it as evidence of an authoritarian streak encouraged by the new authorities, while many government supporters said it was an inappropriate attack on the press regardless of the site’s political orientation.

While Pashinyan and his allies now dominate nearly every branch of government, much of the country’s press remains in the hands of people loyal to the former regime. Other media is fiercely loyal to Pashinyan, with almost nothing in between.

That has led to a sharpening conflict between the government and media.

The committee, perhaps unusually for a media rights organization, placed the blame on the outlets themselves.

“This unprecedented increase in lawsuits is due to the fact that most media continue to be plagued by hate speech, fake news, biased comments, and manipulations,” the group said in a recent report. “In the post-revolutionary period, when the polarization and division of the media into political and financial camps became more acute, many media outlets turned into propaganda machines primarily serving the interests of their political sponsors and ignoring the public interest.”

Hayeli was among the outlets singled out in the report. It is owned by Angela Tovmasyan, the sister of Hrair Tovmasyan, the current chair of the constitutional court and the last remaining official from the former ruling Republican Party of Armenia.

In a video recorded by the egg-throwing attackers, one said that Angela Tovmasyan “does not have the right to work in Armenia” because of her brother. Hrair Tovmasyan has become the target of a multi-pronged attack by law enforcement and Pashinyan allies in parliament who are seeking to remove him from his post.

Some close to the government said the attack on Hayeli was inappropriate.

“I strongly condemn any encroachment on free speech and the press,” wrote Mikayel Zolyan, a member of parliament in Pashinyan’s My Step alliance, on his Facebook page. “It doesn’t matter what kind of media it is, what are the quality of its publications, whether it publishes fake news, and so on.”

But Zolyan also criticized the hypocrisy of many of Hayeli’s defenders for their selective outrage. “These people were silent when, under the previous government, the police broke a journalist's camera or beat activists. When these people condemn ‘encroachment on freedom of speech,’ it raises doubts about either their sincerity or their competence, to put it mildly.”

Others were less bothered by the attack.

“The way this group did it was stupid and it could have been handled better, but who does Hayeli work for, for those who pay them?” asked Gegham Vardanyan of the Media Initiative Center, another watchdog. “Hayeli can try to do their job instead of promoting a political agenda. This is not Charlie Hebdo,” he told Eurasianet, referring to the French publication that was attacked in 2015, killing 12 people.

Shortly after the Hayeli attack, a criminal case was launched.

The attack brought to the fore long-running controversies about the ownership of media in today’s Armenia. Members of the government and their supporters regularly complain that their accomplishments are ignored and their faults exaggerated by a biased press.

“Fake news is a problem not only in Armenia but around the world,” wrote another My Step MP, Babken Tuynyan, following the Hayeli incident. “The only difference is that in Armenia fake news is spread not by anonymous and hidden sources, but by well-known platforms, without a thought of any responsibility, hiding behind the right to freedom of speech.” He added that one way to address the situation is “financial transparency.”

Media ownership in Armenia remains murky, and behind many an outlet’s nominal owners are believed to stand more powerful figures connected to the former authorities.

Before Pashinyan came to power last year, much of the media was operated under a monopoly run by Mikayel Minasyan, the son-in-law of former president Serzh Sargsyan. But shortly after the revolution, Minasyan sold off the various media outlets under his company, PanArmenian Media Group, to buyers also connected with the former authorities.

One group, now called Qaryak Media and consisting of major outlets like Armnews TV and the news website tert.am, was bought by a group of Republican Party members. News.am, also a popular news website formerly part of PanArmenian, is officially owned by journalist Armenika Kiviryan. Armenia TV, another major station, is now owned by Artur Janibekyan, an associate of Minasyan’s and a prominent Russian entertainment executive.

Another network, Ararat TV, was formerly owned by the Republican Party itself but in late 2018 was rebranded as 5th Channel and is now owned by Armen Tavadyan, a friend of former president Robert Kocharyan, and is headquartered in a Yerevan office building owned by Kocharyan.

Of these outlets, 5th Channel is the most anti-government, exhaustively covering what it portrays as political persecutions against the former authorities by the new government, and the alleged weakness of the new authorities in the face of Armenia’s foe, Azerbaijan. “5th Channel is a part of Kocharyan’s political campaign, it’s a propaganda tool,” said Vardanyan of the Media Initiative Center.

Many of the other outlets take a similar, if not quite as extreme, line. And Pashinyan and other government figures have regularly railed against them.

In January, Pashinyan complained that the country’s media was failing to appreciate the changes that had taken place in Armenia and blamed it on the fact that “90 percent of them” were controlled either by the former authorities or “those who oppose us.”

Government supporters also have tried to thwart the influence of critical media. On October 29, the think tank Armenian Institute of International Security Affairs announced it was holding an event but would not allow a number of outlets – including News.am, Hayeli.am, and 5th Channel – to cover it. A number of media organizations, including the Committee to Protect Freedom of Expression and Media Initiative Center, issued a statement protesting the move.

5th Channel’s license is up for renewal in 2020, and Vardanyan said there is a legitimate reason to believe it won’t be renewed. “If 5th Channel is denied it’s going to be a big problem,” he said.

On the other side of the divide, the offerings are slimmer. Pashinyan is himself a former journalist and his family still owns a newspaper, Armtimes, which has naturally taken a very pro-government line but which has a relatively low circulation. Taxpayer-funded Public TV also gives extensive, positive airtime to Pashinyan and his daily activities.

“Coverage of Pashinyan dominates to an outrageous degree,” Vardanyan said. “My hope that Public TV would not become the image maker of Pashinyan and Anna Hakobyan [Pashinynan’s wife] is fading day by day.”