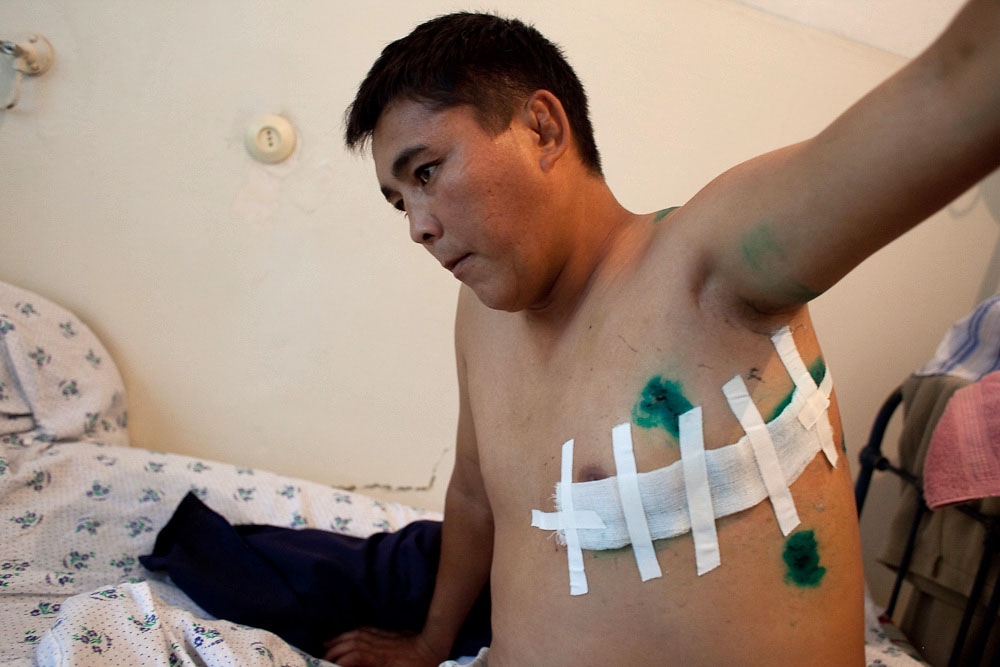 Suyun Sherbayev, an ethnic Kyrgyz who was shot during the disturbances in Osh, recuperates at the Osh Regional Hospital. (Photo: David Trilling)

When Suyun Sherbayev and Sobirjon Satybaldiyev set off for work at the Osh local government office on June 11, they had no idea it would be anything other than a routine work day. The two colleagues were unaware that ethnic violence had erupted in the city overnight. Before the day was out, Satybaldiyev, an ethnic Uzbek and a driver for the local government, would be lying dead in the morgue at Osh Regional Hospital, and Sherbayev, an ethnic Kyrgyz security guard, would be in a ward in the same hospital with three bullet wounds to the chest.These two colleagues from both sides of the ethnic divide fell victim to random violence committed in revenge for assaults on the city's Uzbek neighborhoods. Officially 233 deaths have been registered, but Roza Otunbayeva, the leader of the provisional government, has said that up to 2,000 may have perished. [For additional information see EurasiaNet's archive]. Sherbayev and Satybaldiyev had been sent out to investigate what was happening in the Uzbek neighborhood of Cheremushki, where clashes were continuing after a night of turbulence, Sherbayev told EurasiaNet.org from his hospital bed on June 20. "We were sent there to examine the situation," he explained. "The Uzbeks had set up a [makeshift] barricade. When we were crossing it we came under fire. The driver died. He was Uzbek."Down the corridor, 51-year-old Mamatkalyk Jumagulov, an ethnic Kyrgyz, described his encounter with an angry mob on June 14, the fourth day of violence. Jumagulov, who works in the city's energy sector, was trying to extinguish a fire that had been started by rioters at a small power station in the Furkat District."We'd almost finished and then we heard shouting and gunfire - the Uzbeks were shouting. We dropped everything. We all started running. I was at the back. We had nothing in our hands except for fire extinguishers. ... They fired a few times and three bullets went into my leg," he recounted, pointing to his bandaged right ankle.Jumagulov later discovered that his house and the chaikhana (teahouse) owned by his family had been burned down. "There're only ashes left. ... We've got nothing now - just this," he said, gesturing at his jacket and his partially melted work boots by the hospital bed.Across the ward, Abylkasym Satybaldiyev (no relation to Sobirjon Satybaldiyev), who is ethnic Kyrgyz, has a bullet lodged in his head. He was on his way to report for work at the tax inspectorate on June 14 - after hearing on national television that the violence had abated - when he was hit by a gunshot fired from an angry crowd of Uzbeks.Satybaldiyev faces a major operation to remove the bullet and two small fragments stuck in the side of his head, but he says he harbors no grudge against those who fired the shots. "They were just ordinary guys," he told EurasiaNet.org. "I understand them. Their houses were burned down and their relatives were killed. ... That's also unjust."The hospital has been working at full capacity for 10 days and has treated around 400 injured people, director Shairbek Sulaymanov said. He added that he believed elements of the international media had failed to note that ethnic Kyrgyz had also fallen victim to the violence that broke out when Uzbek neighborhoods were attacked, and strongly denied reports that Uzbeks seeking medical treatment had been turned away from Osh hospitals.As the violence subsides, the hospital is now dealing with frantic relatives searching for missing people. The morgue currently contains 37 bodies, all unidentified.At another medical facility outside Osh, doctors are struggling to cope with the influx of patients. On June 19, EurasiaNet.org correspondents visited a makeshift clinic in the village of VLKSM on the border with Uzbekistan, where Uzbeks displaced by the violence have fled."We are forced to work in these conditions," said a surgeon who gave only his first name, Shukhrat. "It's very bad. You can see it's unhygienic and dirty."The jury-rigged operating theatre consists of three iron beds with mattresses and a table with what remains of the medical supplies on it. Here volunteer doctors control bleeding, bandage the wounds and send the displaced into Uzbekistan for treatment.Despite reports that the border is closed, Uzbek authorities are allowing the injured to pass through, they said.Islambek Toychibayev, a 22-year-old ethnic Uzbek, was lying on a bed with stab wounds to the abdomen in a neighboring room, waiting for his chance to cross the border for medical treatment. He has only a hazy recollection of what happened to him."My friend and I were walking along and a crowd came. We were surprised and asked 'what's happened, what's happened?' The next thing: boof!" he said, demonstrating a stabbing motion. "When I opened my eyes I was in hospital."He received initial treatment at Osh Regional Hospital but was sent home after three days; later his mother brought him to this facility at VLKSM because she was worried the wound was not healing properly. Doctors at the VLKSM stopgap clinic said they treated 10-12 gunshot wounds daily in the first five days of violence, and countless knife wounds.One nurse who declined to identify herself said the clinic had also treated seven rape victims, the oldest aged 23 and the youngest 15. Some had been gang raped, she added, and "they were all in shock." The claims could not be independently verified; the nurse said the girls and their families had gone to Uzbekistan.The border is periodically being opened for displaced Uzbeks who wish to make their way home from refugee camps in Uzbekistan. On the evening of June 19, an hour before the 1800 curfew, it opened to allow a group to return and EurasiaNet.org reporters observed around 30 people crossing the rickety wooden bridge dividing the two countries.The returning refugees did not bring any respite for the overstretched doctors on the Kyrgyz side. Instead they gained another patient: an elderly woman was carried over on a stretcher and rushed into the makeshift clinic. Things are still a long way from anything approaching normal for the hard-pressed medical orderlies in and around Osh.