Although Karimov was hardly warm and cuddly, he had, on occasion, a sort of sense of humor, writes the U.S. ambassador to Uzbekistan in the late 1990s. 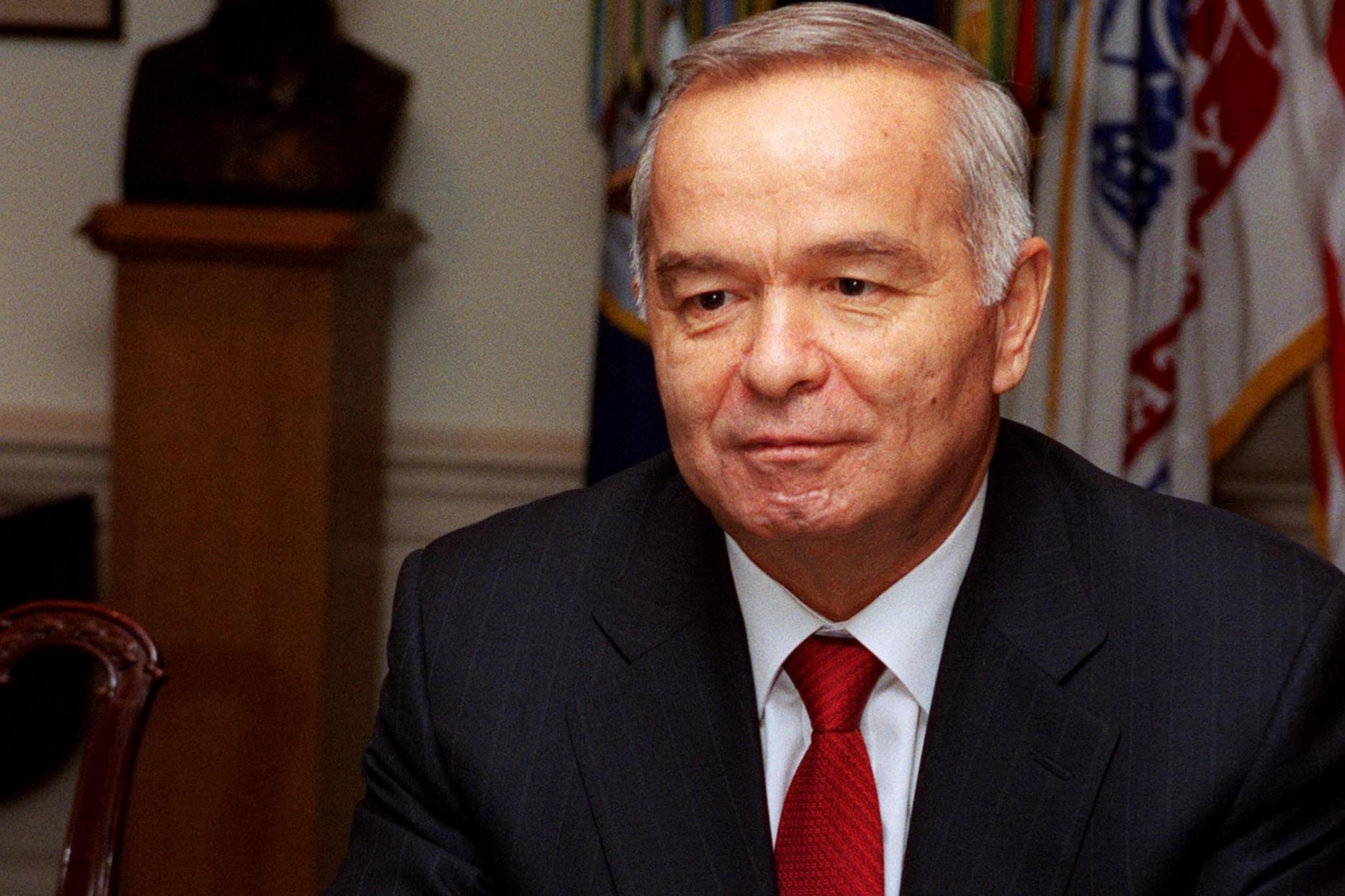 Islam Karimov saw himself in competition with Kazakhstan's leader for signs of American friendship and favor. (DoD photo/Helene C. Stikkel)

This essay is part of a series by American diplomats sharing their impressions of the dramatic early years of Central Asia's independence from the Soviet Union. These memoirs were written at the invitation of the Davis Center for Russian and Eurasian Studies at Harvard University. We publish these with special thanks to Nargis Kassenova, director of Davis's Program on Central Asia. This essay was originally published here.

Although I had met Islam Karimov once or twice before my arrival at Tashkent in October, 1997, I hardly knew him. He evidently knew a lot about me, both from briefings by Foreign Minister Abdulaziz Kamilov, whom I knew quite well, and presumably from KGB reports of my trips to Uzbekistan in the 1970s, when I was serving in the Moscow embassy. I assumed, it proved to be the case, that my perspectives from the 1970s and my fluent Russian would both help me.

I presented my letters, unusually, within three days of my arrival, Kamilov having explained that they wanted the new U.S. Ambassador to be able to go to work immediately. There was no ceremony. Karimov explained his rules of the game. All ambassadors were equal, but the U.S. (and a few others) inevitably had more status. If I asked for an appointment, he would always receive me. It might take a day or two, if he were really busy, but no more. In return, he asked that I keep my requests for calls on him for really “presidential-level” items. I should try to resolve my issues at the ministerial level. He was, of course, free to call me in at any time.

We operated that way for all of my posting. I must have seen him on average once in two months or so. As he got more comfortable, he stopped having Kamilov in attendance and then even dispensed with the close security bodyguard in the corner. I usually went alone because of the language.

There was never a close personal relationship. Uzbek protocol did not work that way, and he was simply not that kind of person. My calls were always on a specific item of business; there were no tours d’horizon over “100 grams” of vodka, no discussions, for example, of broader United States/Uzbek relations and how to improve them. While there were many subjects, for example Uzbek domestic policy, relations with Russia – about which Karimov mostly would not talk – he was more willing to discuss his Central Asian peers (he did not like any of them and respected none save Nursultan Nazarbayev of Kazakhstan. He was particularly scornful of Saparmurat Niyazov in Turkmenistan, whom he called a fool, and Askar Akayev in Kyrgyzstan, of whom he said that he was not even a politician, “only a physicist”). He was conscious of how the United States treated his peers. While he seemed not to worry about the three smaller countries, he very much saw himself in competition with Nazarbayev for signs of American friendship and favor.

I tried other ways of getting to him, since it became clear that I would never be able just to drop by the palace for a drink. I set the embassy the task of looking into his Uzbek friends. With whom does he drink, with whom does he hunt, play cards or play tennis? Who was his mistress? Schoolmates? Etc. All efforts produced only dry holes. He mostly worked. On the other hand it became clear, after a while, that the problem of getting to the president was not limited to me –Uzbek officialdom had the same problem. I realized this when Kamilov came up with the idea that I should make a speech, once every quarter, at the English-language University of World Economy and Diplomacy of which he was, ex officio, the rector. As we worked it out, the embassy would translate my speeches into Russian which Kamilov assured me he would get to the president who would certainly read them. We would agree on the subjects in advance, sometimes his idea, sometimes mine. Once or twice his suggestions seemed odd as topics for an American ambassador talking to students, but it would subsequently turn out that they were related to some impending policy decision on which Kamilov was trying to gain influence.

As the Uzbeks became more accustomed to independence, their formality, their sense of self, increased. By the time I left in 2000, most ambassadors were seeing Karimov only on their arrival when presenting their credentials and on departing. The Russians, obviously, were in a unique position as far as access was concerned, but I will hazard that the United States came second with perhaps the South Koreans, the latter because of the large Korean ethnic minority, and Israel. China and India were also-rans, a fact which clearly rankled – the Chinese colleague observed to me at a reception that he had read I had made my “regular, routine visit” to Karimov earlier in the week.

Things changed after the very nearly successful attempt to assassinate Karimov in early 1999. We, the Germans, the Israelis and, presumably, the Russians were climbing all over each other to offer good offices to investigate the incident, to beef up presidential security and so on. The Uzbek administration mostly closed to foreigners, except, paradoxically, that I found myself seeing Karimov much more often, getting called in perhaps twice a month for a while. It was in this period that he spoke of himself, of his rise in the Soviet bureaucracy, of the problems he faced as independent Uzbekistan’s first president, his problems with his peers. Alas, the period of introspection did not last.

Although Karimov was hardly warm and cuddly, there was, on occasion, sort of a sense of humor. If he called me in he would, reasonably enough, go first. He once broke off his opening monologue to assure me that he was not planning to give me the entire history of Central Asia since the Turks had taken Constantinople in 1453. On another occasion he said he had not seen me at the huge (cast of literally thousands) Nowruz celebration. If he had to attend, so did the U.S. ambassador. And when he presented me an Uzbek order – I was, apparently the first foreigner to receive it – he said I should understand he was giving it to me, “not to your f***ing government.”

Karimov had a somewhat schematic view of the United States. We were big, rich and mattered in the world. We could do things for them and they would help us if they could. We were lumbering, not subtle, we did not really understand Central Asia and had odd crotchets: human rights, press freedom, environmental concerns. For him, the U.S. government was less a unified whole than a group of semi-independent entities. The White House was good – Mrs. Clinton had visited. DOD was good – it provided assistance. CIA was good, for the same reasons. The State Department was bad because it mostly criticized. Congress was inscrutable, but mostly bad. And so on. The U.S. ambassador was, well, in the middle.

Joseph A. Presel served as United States ambassador to Uzbekistan from 1997 to 2000.