Memoir | The Shushkevich I knew

Remembering an accidental leader whose brief political career mirrored the greater tragedy of his country. 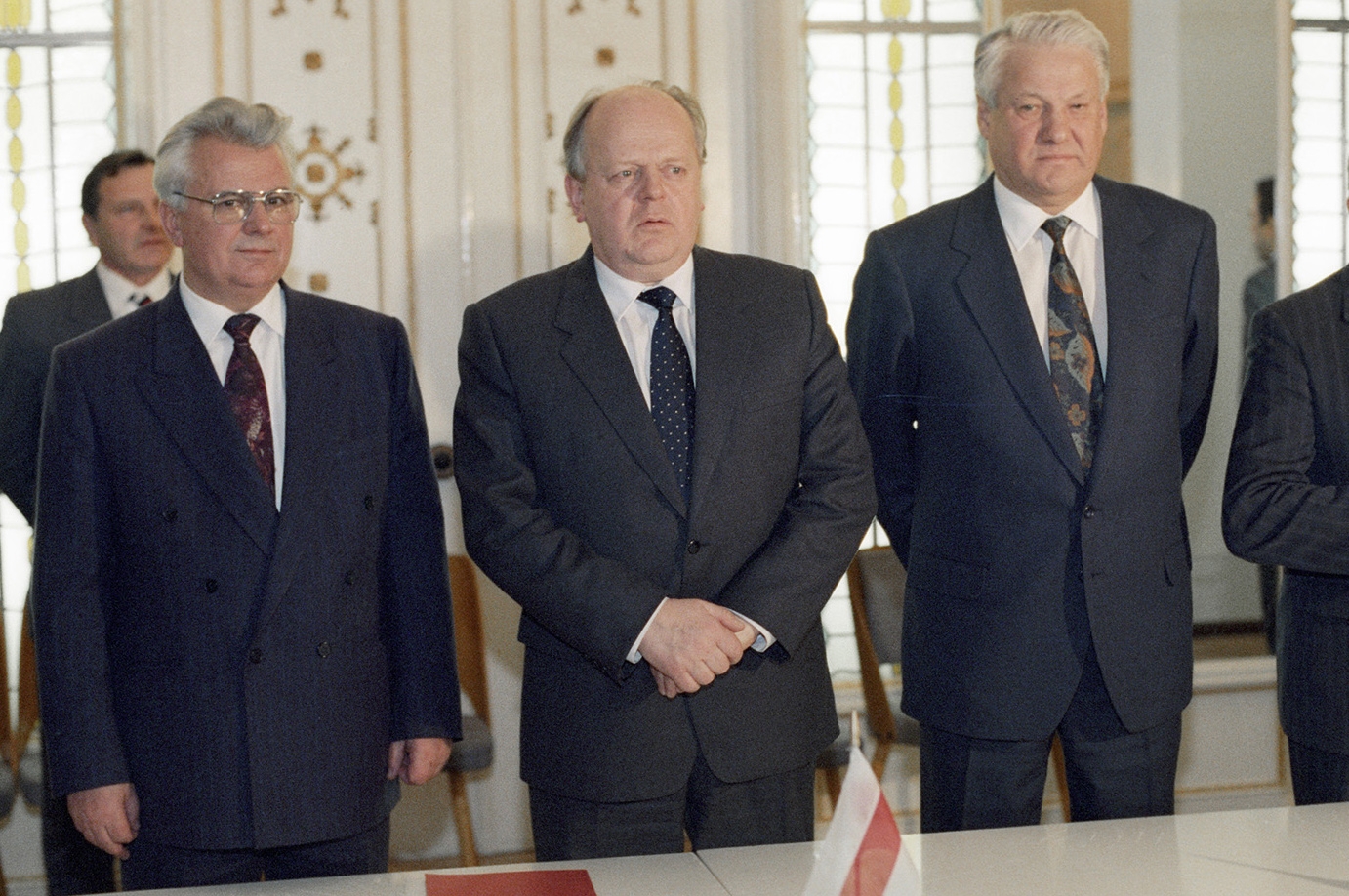 Belarusian statesman Stanislav Shushkevich, who died on May 3, is probably best remembered for hosting the meeting that ended the Soviet Union.

On December 8, 1991, in a state guesthouse in the remote Bialowieza Forest, Shushkevich and the leaders of Russia, Boris Yeltsin, and Ukraine, Leonid Kravchuk, signed a series of accords that effectively finished the communist state.

A little over 30 years later, we are witnessing the tragic epilogue of that historic event. Russia and Ukraine are engaged in a vicious war while Belarus hosts Russian military personnel and supplies. I suspect, at the time of his death, Shushkevich, like many Belarusians, was appalled by this turn of events, as he was no doubt by the sad developments in his own country, internationally isolated for the harsh rule of his successor, Alexander Lukashenko.

I first met Shushkevich when I served as deputy chief of the U.S. Embassy in Minsk from 1993 to 1995. At the time, he was chairman of parliament, which made him the de jure head of state. Within a few months he was ousted from that position; a few months later, Lukashenko won election as Belarus’ first president under the country’s new constitution. Years later, as U.S. ambassador from 2003 to 2006, I would occasionally meet with Shushkevich, usually at a park or in his book-filled apartment, where we would talk about the past, the present and the future of Belarus.

Surprisingly, while a vocal opponent of Lukashenko, Shushkevich never suffered the harassment and brutality, including forced deportation and physical elimination, that nearly all of Lukashenko’s political foes encountered. The fact that he died peacefully at the age of 87 in Minsk is testimony to his legacy as a politician, as well as perhaps a sign of how Lukashenko himself, as Belarus’s only other head of state, would like to end his days.

Unlike his Russian and Ukrainian comrades in the Bialowieza Forest, Shushkevich was never an influential Communist Party politician, nor was he an elected president. He had been a respected but little-known physicist, who had attained the honor of becoming a member of the Belarusian Academy of Sciences.

His subsequent life as a politician was unplanned and circumstantial. The changes of the late Gorbachev period had penetrated even the staid and ultraconservative Belarusian Soviet Socialist Republic, pulling apolitical people like Academician Shushkevich into politics as an elected member of the Supreme Soviet, as the Belarusian parliament was then called. He was neither avid nationalist nor die-hard communist. After the demise and discreditation of the Communist Party leadership in Minsk following the failed August 1991 coup attempt in Moscow and the vote by the Belarusian Supreme Soviet proclaiming independence a few days later, Shushkevich found himself chairman of the Supreme Soviet, becoming head of state of the newly independent Republic of Belarus.

Belarus’s path to independence had not been entirely spontaneous. The dramatic events in Moscow had given the Belarusian legislature little choice but to vote for independence following other equally reluctant Soviet republics. Like many Belarusians at the time, Shushkevich himself had been ambivalent, if not wary of independence and what that would portend for Belarus.

Shushkevich did not actively seek the chairmanship, nor did he have the political experience to handle his office effectively. Other than a few personal advisors he collected from his academic circle, he had no professional staff. The office itself also had little true power. Real political and administrative power rested largely in the hands of the prime minister, a long-time apparatchik, along with the security services and the “red directors” who ran the huge state enterprises that dominated Belarus’ Soviet-style economy. All were highly dependent on their ties to Moscow, and all had been behind-the-scenes opponents of independence and the collapse of the Soviet Union.

After independence, Shushkevich found himself distrusted by both the real powers and many Belarusian nationalists, who sometimes asserted he was a witting or unwitting agent of Russia.

Yeltsin had encouraged this view. He considered Shushkevich, like Belarus in general, to be Russia’s Slavic kid brother, an ally in his own efforts to end Mikhail Gorbachev’s rule over the USSR.

Shushkevich told me that Yeltsin’s people had hijacked the Bialowieza Forest meeting. What had been planned as a bilateral Yeltsin visit became a Russian-managed summit with Ukrainian leader Kravchuk (who died this week) aimed at replacing Gorbachev’s reformed USSR with a new union essentially run by Russia and Ukraine. Indeed, in the Yeltsin camp’s retelling, Belarus was only the handmaiden and host. Belarus itself, Shushkevich admitted to me once, had to agree with whatever Russia wanted, “because in the end we didn’t have a choice.”

Kravchuk, however, while eager for Ukraine to leave the USSR, had no desire, or political power, to commit to joining a new union. Shushkevich said that, failing to get the Ukrainian president’s commitment to a new confederation, at the forest meeting Yeltsin raised with Kravchuk the return of Crimea to Russia. But Kravchuk demurred, asserting he had no authority from his parliament to discuss the subject. Yeltsin was furious.

The rest is history.

Washington, for its part, considered Shushkevich an aspiring democrat, who could lead Belarus to become a market-oriented democracy. This idealistic vision persisted despite the many cables our embassy sent home explaining the realities of the Belarusian political scene and Shushkevich’s particularly weak position.

Shushkevich himself was highly skeptical about the prospects of his country achieving Washington’s lofty goals on Washington’s timetable. Our colleagues in the White House, however, as so often happened, trusted their own ill-informed instincts and desires over our less sanguine views from the field. They invited Shushkevich to Washington to meet President Bill Clinton, thinking this would elevate him in the minds of Belarusians as a respected world leader. And, by having Clinton visit Belarus in January 1994, they wanted to give Shushkevich personal credit for Belarus’ agreement, along with Ukraine and Kazakhstan, to hand over its huge Soviet-legacy nuclear arsenal to Russia. It was the first and last time an American president visited Belarus.

The fulsomely public American embrace of Shushkevich, as we at the embassy had predicted, did not help him. Rather, it galvanized Shushkevich’s powerful enemies into portraying him as an American lackey and probably accelerated his removal as parliamentary chairman only weeks after Air Force One had lifted off from Minsk.  Shushkevich had little chance to win the presidency after that.

Years later, after I returned to Minsk as ambassador, I found Shushkevich ever warm and gracious, wistful and, as always, mordantly funny.

Like many Belarusians I know, he had no grand illusions about himself or his country. Fate had brought him dubious fame and a place in history. But he was a tragic figure: His elevation as a head of state powerless to right the economy made Shushkevich the political scapegoat for many Belarusians who saw their lives and security turned upside down on his watch. In that way, he inadvertently paved the way for an obscure but politically astute and ruthless parliamentary deputy from Shklov. Even if Shushkevich could have predicted the path Lukashenko would follow, he could not have prevented it.

George Krol, a retired career diplomat, served as U.S. ambassador to Belarus, Uzbekistan and Kazakhstan. He currently teaches as an adjunct professor at the U.S. Naval War College in Newport, R.I.