Memoir | Where is Central Asia, anyway? 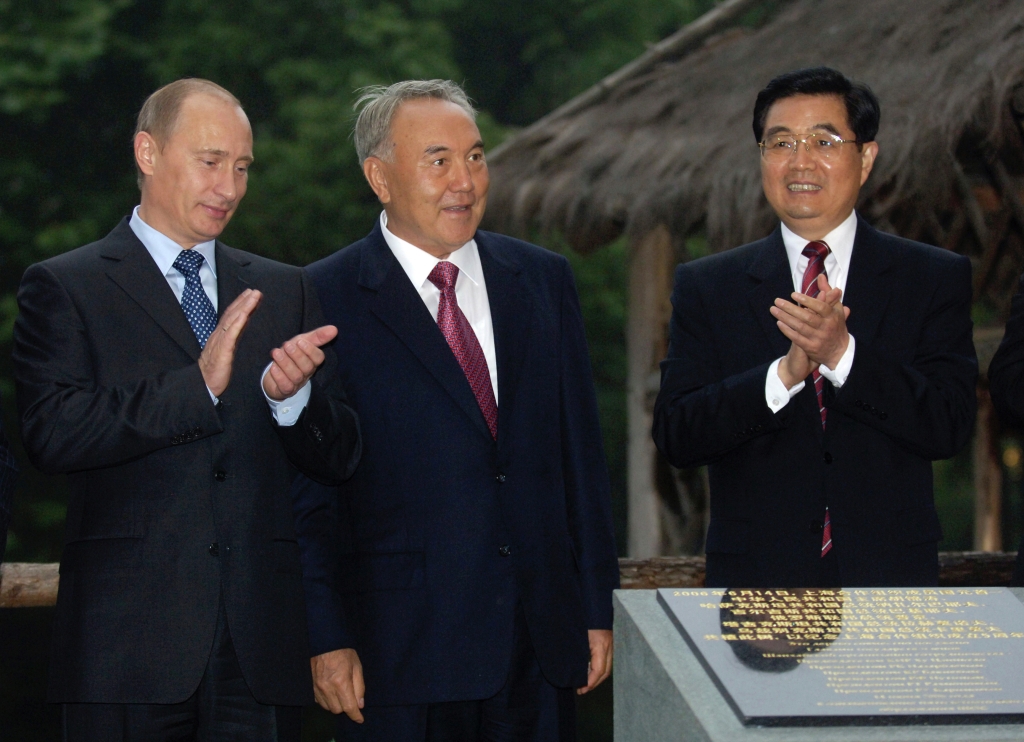 Stuck in the middle with you: Vladimir Putin, Nursultan Nazarbayev and Hu Jintao at a 2006 meeting in Shanghai. (Sergey Guneev/RIA Novosti)

This essay is part of a series by American diplomats sharing their impressions of the dramatic early years of Central Asia's independence from the Soviet Union. These memoirs were written at the invitation of the Davis Center for Russian and Eurasian Studies at Harvard University. We publish these with special thanks to Nargis Kassenova, director of Davis's Program on Central Asia.

My first official trip as assistant secretary of state for the newly combined Bureau of South and Central Asian Affairs was in May 2006, to join Vice President Dick Cheney on a stop in Kazakhstan. Dazed by the long flights, I sat down to a banquet with President Nursultan Nazarbayev. Gold-plated cutlery, huge hall, huge table – the whole grandiose works for the American visitors.

Twice during the banquet, Nazarbayev nudged Cheney and pointed across to me: “Boucher! That Boucher thinks we’re Asians. We’re not. We’re Europeans.”

Since the only item on my policy agenda at that point was to help establish Central Asia as an independent region with links in all directions, I wondered whether I was dead at the starting line.

At the end of the banquet, Nazarbayev came over, wrapped an arm around my shoulders and said: “Now that you understand my point, we can work together.”

This has been a running theme in our Central Asian relationships, one that manifested itself repeatedly in policy choices. Was Central Asia a backwater of Europe, linked by peoples and pipelines to Russia? Or, as Secretary of State Condoleezza Rice believed in uniting Central Asia and South Asia in one bureau: Could it come into its own as a region that benefits from links in all directions – north to Russia, west to Turkey and Europe, south into India and Pakistan, east into China?

The question has long hung in the background of discussions of Central Asia, at least since the grand strategists of the early 1900s asked how the region fits into the world.

Nazarbayev later announced The Path to Europe policy in 2008, telling me, “We know the path to Europe also leads to the United States.” In other words, the U.S. was important to him, but first and foremost came Europe.

The Chinese in recent years have made much of their Belt and Road Initiative with maps of brightly colored routes from China to Europe. The first time I saw such a map, however, was in Kazakhstan at a briefing by the transport minister entitled “Kazakhstan, Hub of the World” – rail lines and pipelines stretched in all directions and converged at a central point on the Kazakh steppe.

Russia looms large to the north. Russian speakers, job opportunities in Russia, pipelines going north – all this still dominates. The modern history of the region and the personal histories of the leaders remain fixed on Russia. I once asked Tajikistan’s President Emomali Rahmon how they managed the complicated issue of water rights in earlier days. His answer was simple: “We went to Moscow and they told us how much water we each would get.”

What about now? Clearly, the influence of 70 years trapped in the Soviet Union is still apparent, although Chinese projects and Chinese traders (and Chinese bribes) are more and more evident in bazaars and government ministries. Yet, given China’s paranoia about its Western flank, Afghanistan’s fall to the Taliban, and the constant turmoil in the Caucuses, Central Asia’s outlets are limited. There is still no trans-Caspian gas line to Turkey and Europe, nor a trans-Afghan pipeline to South Asia.

Visits by senior American officials to the region always excite great interest and stories about superpower competition. But practically speaking, what did our visits to a hermetic place like Turkmenistan achieve? We helped the government negotiate a better price for its gas exports to Russia, where the Gazprom monopoly feared that someday we would succeed in providing another outlet for Turkmen exports. The largest delegations at the funeral for the Turkmenbashi, Saparmurat Niyazov, in 2006 brought scores of representatives from Turkey and from Gazprom. Our three-person delegation couldn’t compete, especially given that the funeral was on December 24 and we wanted to hurry home after a short meeting with the new leader. The Russian and Turkish delegates stayed to wine and dine the new authorities.

American efforts to promote regional cooperation – the C5+1 meetings since 2016, for example – offered promise. We’d all heard the stories from leaders about threats from their neighbors:  renegade officers in Uzbekistan preparing to invade Tajikistan or fears of Islamist infiltration from Kyrgyzstan into Uzbekistan. Just getting the leaders together to discuss common issues marked a improvement – but, as of yet, there are no practical outcomes to show for the effort.

From the start, U.S. officials in the region have been explicit in public and in private: Every direction for Central Asia is a good one, by providing the countries with balance and bolstering their status as independent states. Yet, it hasn't been easy for them in practice. Central Asian leaders wanted the U.S. presence as negotiating leverage with their powerful, close neighbors; they also wanted us to prevent terrorism from expanding north from Afghanistan. Our preoccupation and now withdrawal from Afghanistan have made those goals difficult to achieve.

We assigned a senior ambassador to work on linking electricity lines from Central Asian hydropower dams to markets in Pakistan and, eventually, we hoped, to India. The promise was clear and welcomed in the region, but war and practical considerations stymied cooperation; each country had its own plans.

Central Asians also wanted outlets to the Arabian Sea, but not necessarily according to our vision.

In 2007, when we opened a new bridge across the Panj River to Afghanistan, Tajikistan’s Rahmon pulled me aside to say, “Now that we have a bridge, we need a railroad.” He explained that a railroad across northern Afghanistan could connect to Iran’s network and would give him access to the sea. I had to allow that we were not in the business of fostering new connections with Iran. Our vision of Central Asia with multiple outlets was itself limited by our omission of Iran.

So, where is Central Asia? European hinterland? New Chinese sphere of influence? Landlocked Russian dependency? World heartland with cunning leaders who balance the superpowers? Can we hold to our vision that someday the delicious melons of the Ferghana Valley will be served on the breakfast tables of New Delhi, that we could rent a car in Almaty and drop it off in Karachi or Istanbul or Shanghai?

Those connections remain dreams. With the U.S. withdrawal from Afghanistan and renewed fears of terrorism emanating from the south, one can only hope that Central Asians will make the most of their opportunities north to Russia, east to China and West to Turkey. However, the fact that Central Asia's outlets to the world go largely through China and Russia means less pressure for internal change – less pressure to open economies and governments, to end corruption, or to provide competition for oligarchs and state companies. For the moment, the hub of the world remains hemmed in by its geography and history.

Ambassador Richard Boucher served as assistant secretary of state for South and Central Asia from 2006 to 2009.