Memorable Moments from the Age of Misha 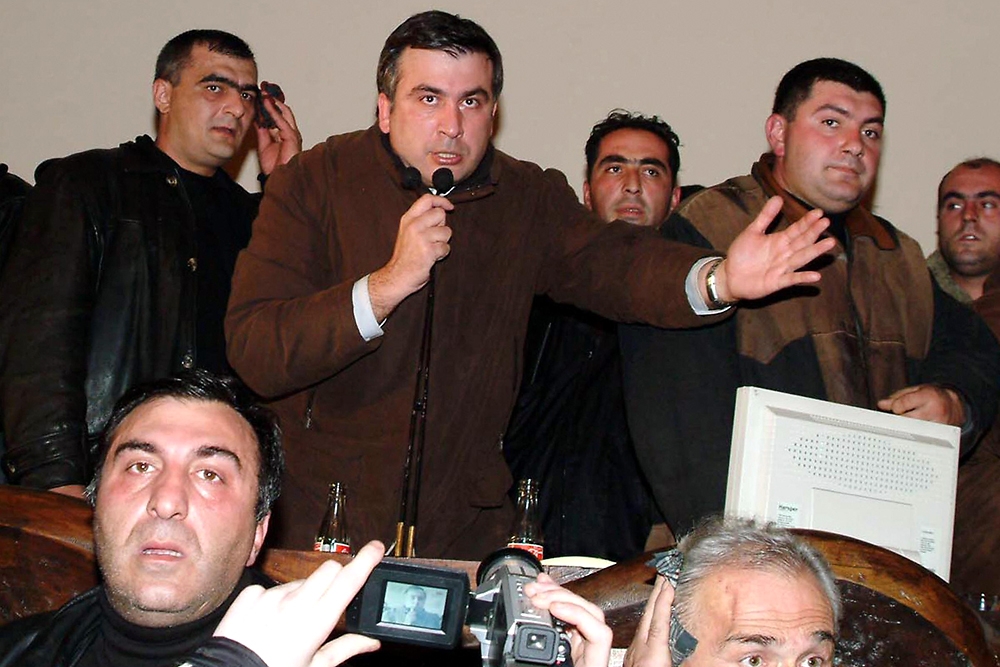 While still a government opposition leader, Mikheil Saakashvili addresses supporters after storming the Georgian parliament building on Nov. 22, 2003, to demand the resignation of then President Eduard Shevardnadze. (Photo: Getty Images)

Nearly ten years ago, Mikheil Saakashvili, with crowds of supporters in tow, forced his way into the Georgian parliament in Tbilisi, brandishing a red rose and screaming “Resign!” at his former benefactor, President Eduard Shevardnadze, who, ignoring the revolution happening outside, was busy welcoming in a questionably elected parliament. Since then, Saakashvili, known to friends and foes alike as Misha, has kept storming into places. An indefatigable modernizer, Misha ran around the country, busting corrupt and loafing officials, driving race cars and tractors, opening and closing enterprises, and bulldozing over everything that stood in his way, be it enemies or buildings. And he went about it with his trademark goofy giggles and out-of-control forelock. His outsized personality dominated Georgian politics for a decade, making for what might be called the Age of Misha.To remember this era, we have, with contributions from readers, compiled a list of what might be termed the top-five styles of Misha. Even with a new president to be elected in Georgia's October 27 elections, he will not easily be forgotten. 1. Misha, the Road-Runner:
The country has had a hard time keeping up with its hyperactive president, both literally and figuratively speaking. To borrow a line from Lewis Carrol’s Red Queen, it took all the running you could do and more to keep up with the incredibly agile Saakashvili, and it is true both for his rivals and his entourage. When he went barnstorming in the wine-region of Kakheti before the 2008 presidential election, TV crews, advisers and his security detail had to gallop to catch up with Saakashvili, who, dispensing hugs and promises, nearly sprinted though the main town of Telavi. “Keep going!” his then PR-adviser Marika Verulashvili screamed at journalists as she trundled behind, a hand to her chest.
2. Misha, the Frequent-Flyer:
An indefatigable jetsetter, Saakashvili has popped up everywhere from New York to Mestia in a lickety-split, pressing the flesh with foreign leaders and local farmers alike. Now the Saakashvili run is screeching to a halt, as he is set to pass on Georgia’s presidency to a slower and less dominating figure; both in terms of personality and constitutional powers.
3. Misha’s Got the Beat:
Saakashvili’s rule had a syncopated musical score. His reelection in 2008, which followed rage over a crackdown on protesters, was accompanied by a feel-good campaign soundtrack “Misha’s Awesome”/ (“მიშა მაგარია”). Music hits brought to Georgia by the Saakashvili government, included a United Artists-style ode to Abkhazia, a series of promo musical videos for the police that once even featured children singing and dancing in police uniforms, and many a song by the young talent Sopo Nizharadze of whom the president is said to be a fan. Even when Russian troops invaded in 2008, the Saakashvili government found the time to take a disco-stand against Russian guns. 4. The Not-Safe-for-Work Misha:
Apart from the well-known ups and downs of his rule, Saakashvili was also a bit of a cultural misfit in his traditional, conservative country. Jaws dropped when he once leeringly advised juveniles at a youth camp to explore the ample fun opportunities offered by nearby bushes and trees. Rumors of frequent sexual peccadilloes, photos of him hanging out with scantily dressed Russian journalists or embracing a celebrity masseuse Dorothy Stain (Dr. Dot) fed to his reputation of an inveterate philanderer. Vainly did Dr. Dot try to clarify the nature of the relationship. 5. Thus Spoke Misha:
Until recently, national TV broadcasts were one long Misha show. Georgians often groaned when Saakashvili misquoted well-known lines by Georgian poets, advised the griping intelligentsia to flush itself down the toilet, jumped or danced in public, chewed on his tie, tripped off a bridge, vowed to build a megapolis in a swamp or offered to mail his private parts to Russia’s Vladimir Putin, who famously offered to hang the annoying Georgian by the parts in question. Such exchanges with Putin caused lots of domestic commentary on allegedly Freudian undertones in the two men’s feud. And then there was, of course, the Misha laugh, an unforgettably liberated and high-pitched giggle. Love him or hate him, Georgia is undeniably a very different place today than the dysfunctional, semi-mafioso state that it was when Saakashvili burst into parliament on that November day in 2003. Georgians may pass a more clinically detached verdict on Saakashvili’s rule after time passes and they can look at his era within its historic context. In the meantime, Saakashvili is getting ready to move out of his office in Georgia’s glimmering glass-dome presidential palace and into a humble apartment in downtown Tbilisi. But it is unlikely that Misha will be able to fit his personality into the straitjacket of a political has-been.