Her treatment of human rights, and how to balance them with Europe's interest in Azerbaijani energy, were closely scrutinized during the visit. 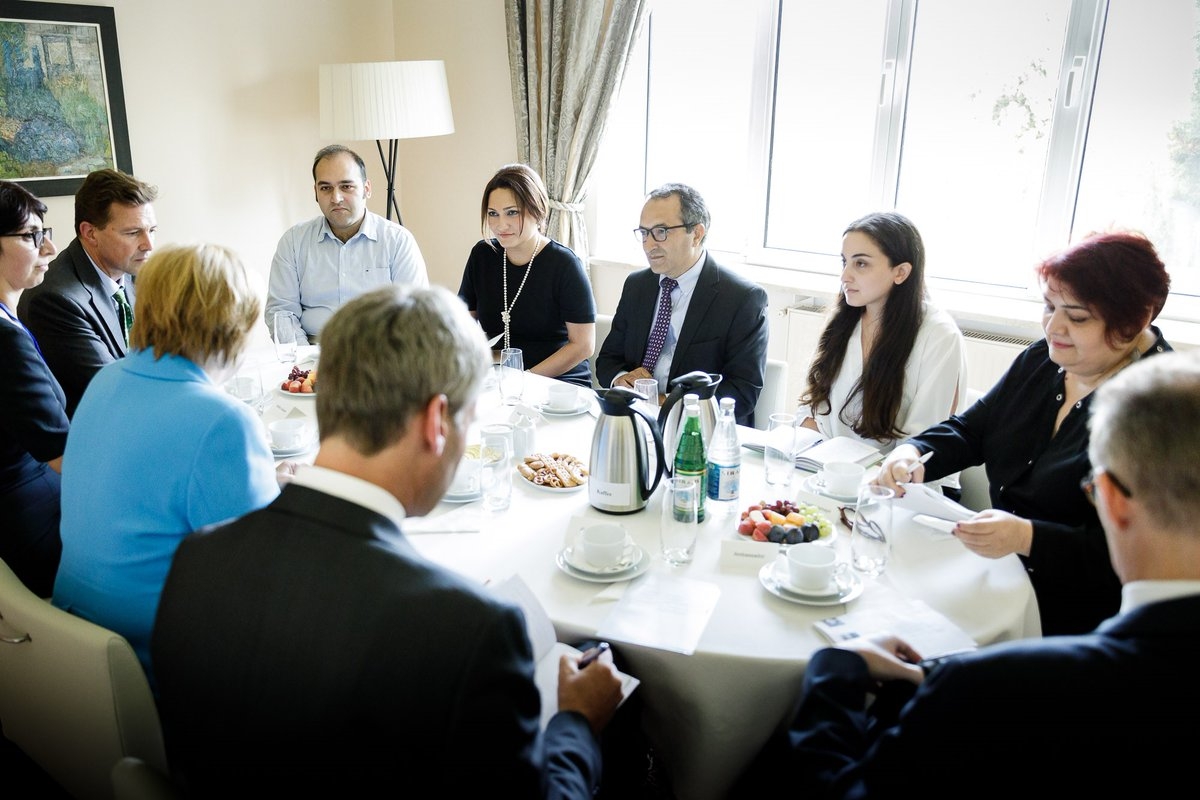 German Chancellor Angela Merkel meets with a group of civil society activists during her visit to Baku. (photo: Steffen Seibert)

During German Chancellor Angela Merkel's recent visit to Azerbaijan, she held a meeting with members of the country's beleaguered civil society, gaining plaudits from many who wanted Merkel to press Azerbaijan on its dismal record on democracy and human rights.

But the visit proved controversial in Azerbaijan's opposition and activist community, and exposed a rift among the country's activists about how anti-government one has to be to truly represent them.

The meeting, on August 25, included some Azerbaijanis with impeccable credentials in standing up to Azerbaijan's authoritarianism, like investigative journalist Khadija Ismayilova and Turgut Gambar, a leader of the youth opposition group N!DA.

But it also included more apolitical figures and figures who, if not precisely pro-government, were not as anti-government as the others.

The latter group occasioned a great deal of commentary on Azerbaijani political Facebook, with some arguing that the meeting was a sham aimed at not ruffling the feathers of the host government.

The “local German embassy is fooling” Merkel, said prominent historian and political commentator Altay Göyüşov, in one of the many discussions. “The majority of these ‘civil society leaders’ were handpicked by the Azeri government. It reminds me of how in the past the Soviets picked ‘deputies’ from ‘heroic’ Azerbaijani workers of industry and agriculture. The same old,” Göyüşov wrote.

Media analyst Elesger Ehmedoglu wrote in a post that one relatively little-known figure at the meeting – Sevinj Samadzadze, a gender rights and peace activist who works with a German non-governmental organization – was not “serious” enough to meet Merkel. “Maybe this person is talented, but to choose such a person to represent civil society is not serious,” he wrote. “Particularly in the country that has been going through so many problems in the last four years.”

Others came to Samadzadze's defense. “If you have not heard about them, that doesn't mean their work isn't significant,” wrote Elvin Yusifi, an Azerbaijani activist, in his own post. “If you look beyond your echo chamber you can see the contribution that people like Sevinj are making to the society. Civil society in Azerbaijan is not monolithic and its agenda doesn't consist of the standard topics.”

Samadzadze herself said that she is not well known because she is not active on social media. “I believe there is a need to do more offline than online,” she told Eurasianet. “I believe the social media debates about my participation in the meeting are the result of false rumors and sometimes hate speech, and demonstrate how youth participation is not welcomed yet and understood only in form of tokenism. It shows that there is still a long way to go before we can establish a strong, cooperative and intergenerational civil society.”

After years of government repression, Azerbaijan's civil society groups have largely been neutered or banned, many of their leaders forced into exile, imprisoned, or into simply giving up. The dispute over the Merkel visit highlighted the emergence of a new breed of activism in the country: less concerned with high politics or opposing or promoting the government and more focused on smaller-scale or grassroots issues.

The controversy demonstrated a rift “between those who are working on highly politicized issues like the businesses of president's family, elections, human rights, political prisoners; and those informal or semiformal youth who work in areas which are traditionally perceived to be less political, though that is changing now,” said one Azerbaijani civil society activist, speaking to Eurasianet on condition of anonymity because of the sensitivity of the subject.

“There are disagreements over what 'civil society' means and who has earned the right to represent it,” said another civil society activist working on Azerbaijan. An old guard sees many younger activists as “people who accommodated themselves to the government and did not go to prison/exile... it seems like [the old guard] is hostile to the young people who don't share the same set of political priorities, they assume that means that they are collaborators when in all likelihood they don't understand why getting a handful of people they don't know out of prison should be the number one goal of their activism at all times.”

The German Embassy in Baku did not respond to a request for comment by the time this piece was posted.

Merkel's treatment of the fraught issue of human rights was being scrutinized closely, as Western governments are frequently accused of paying lip service to human rights in the post-Soviet world while engaging in realpolitik-based relations on security or energy. High on the agenda of Merkel's visit to Baku was the Southern Gas Corridor aimed at transporting natural gas from Azerbaijan's Caspian Sea fields into Europe. Previewing the trip, a senior German official told the Financial Times that Germany had a “big interest” in the gas pipeline projects in Azerbaijan.

Ahead of Merkel's visit, media rights groups held an event in Berlin to highlight problems of press freedom in Azerbaijan and asked Merkel to raise the issues with Aliyev.

“European leaders should be careful while shaking the hands of presidents of authoritarian regimes,” said Leyla Mustafayeva, whose husband, journalist Afgan Mukhtarli, is in prison in Azerbaijan on politicized charges.

The week before Merkel's visit, the country's most prominent political prisoner, the opposition politician Ilgar Mammadov, was released in a move that many interpreted as a means of blunting European criticism during Merkel's visit. (Mammadov himself said subsequently that he didn't think that the release was timed to Merkel's visit.)

At a joint Aliyev-Merkel press conference in Baku, one German reporter asked Aliyev about Mukhtarli's case and those of other imprisoned journalists in the country.

“Azerbaijan is a loyal country to democratic values,” Aliyev answered. “All freedoms, including freedom of speech and media freedom are provided in the country. For criticism and different perspective no one is persecuted in Azerbaijan.”

Merkel gently pushed back. “We did not find common ground on all issues. But I argued that a strong civil society must be part of an open, secular society and made clear that we would like to see this strong civil society,” she said. Publicly, however, she did not raise specific cases of political prisoners, as many activists had hoped she would.

“It is pity that she did not specifically focus on journalists and other political prisoners by name perhaps but I think it is significant that she raised human rights issues,” Hugh Williamson, the head of the Europe and Central Asia department of Human Rights Watch, told Eurasianet.

Others suggested the meeting would have been more effective had it occurred before Merkel's meeting with Azerbaijani President Ilham Aliyev, rather than after. “It might have been a clear message to both sides and would be helpful for her to get the clear picture of the human rights issues in the country before she addressed it to Aliyev,” Rasul Jafarov, a prominent human rights activist, told Eurasianet.

Williamson said he was largely satisfied with the makeup of the group with which Merkel met. “Of course from my point of view it will always be important for strongly independent people to meet the chancellor. Perhaps it would have been better if others would have been present also in the room. On the other hand I think it is important she had a meeting with at least three of them and delivered very clear strong messages to the chancellor,” Williamson said.

Ismayilova also defended the makeup of the group. During the meeting with Merkel, she asked the chancellor “to be more outspoken on human rights and democracy issues because people here need to see examples of European politicians who aren’t silenced by corruption money, so people keep faith in Europe,” she wrote in a Facebook post. “My impression is that Chancellor Merkel understands the hardships and mechanisms of autocratic regimes. She said our concerns are important and some have been addressed in the meeting she had with President Aliyev. I hope to hear more from her.”

Lamiya Adilgizi is a freelance Azerbaijani journalist. Joshua Kucera is the Turkey/Caucasus editor at Eurasianet, and author of The Bug Pit.