Kazakhstan’s government is targeting users of Telegram for discussing politics. 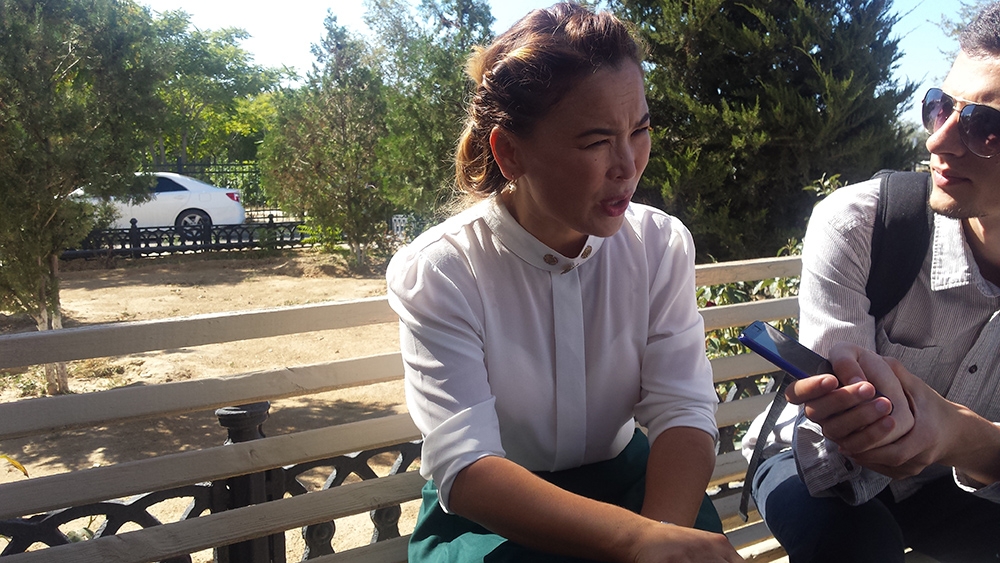 Aigul Akberdi, a mother-of-four in western Kazakhstan, faces up to 10 years in prison for calling for political change online. (Chris Rickleton)

When Aigul Akberdi downloaded the Telegram messenger application, she thought it would be a little bit of fun.

Akberdi, a 38-year-old mother of four in the western Kazakhstan town of Aktau, said she was inspired to get the app after watching funny videos promoted on Facebook and Instagram. Her husband, Ablovas Jumayev, had got hooked on Telegram a few months before.

Then the couple discovered a taste for politics.

Now, Akberdi and Jumayev are being prosecuted in cases that illustrate how Kazakhstan’s authorities are borrowing from the playbook of authoritarian peers like Russia and Iran in cracking down on dissidence even in the virtual world.

Jumayev’s trial began in Aktau earlier this month. He is accused of using Telegram to incite social hatred and faces another charge of distributing leaflets calling for the forcible overthrow of the government. If he is found guilty, Jumayev could face up to seven years in prison.

Akberdi has also been slapped with the charge of urging the overthrow of the government. But she is accused of doing this through Telegram, and this is an important distinction: she faces up to 10 years. Her trial has yet to begin.

“I remember very clearly, the police investigator told me: ‘We’ll jail you and your husband, your relatives will spurn your children and they will end up in a children’s home,’” Akberdi told Eurasianet this month, following a hearing for her husband’s case.

This trial appears to be the first in Kazakhstan in which a messaging app has featured so prominently. But with the government determined to vanquish all manifestations of dissent, it is unlikely to be the last.

Akberdi told Eurasianet that she was apolitical before the pair were added to a Telegram-based opposition chat group without their consent.

“To begin with we were irritated that someone had simply added us without asking. Then we asked what sort of group it was and [the participants] replied that it was for people fed up with the current regime,” said Akberdi.

More problematically for Akberdi, the group in question was affiliated with Mukhtar Ablyazov, the Europe-based nemesis of President Nursultan Nazarbayev. In mid-March, a court in Astana designated Ablyazov’s Democratic Choice of Kazakhstan, or DVK, an extremist organization. The ruling instantly raised the stakes for anybody dabbling in online opposition politics.

Akberdi and Jumayev began posting in the DVK group on Telegram in the months running up to the court ruling.

“I saw his program and liked it,” Akberdi said of Ablyazov, who is accused by the government of fleeing the country after bilking the bank he used to run of billions of dollars. Ablyazov insists he is the victim of a politicized stitch-up.

Akberdi and Jumayev became enthusiastic posters in the DVK group, although both claim they did not post there after the movement fell under an extremism ruling. All the same, they quickly ran into trouble.

In May, Jumayev was arrested in part for a March 6 post in the Telegram group, which counts tens of thousands of users, noting that the newly appointed regional head of police in the oil-rich western region of Mangystau hails from the same clan as Nazarbayev.

To understand why this could be perceived as so incendiary, it is important to understand that for all the official rhetoric on national unity, Kazakhstan is a country characterized by many regional and clannish fault-lines. Nazarbayev is of the Shaprashty clan, which is concentrated historically near the former capital, Almaty, while the population of Mangystau is predominantly Adai. Public appeals to traditional subnational or ethnic loyalties provoke severe anxiety among the elite in Kazakhstan’s capital.

Akberdi faces an even stiffer sentence of up to 10 years in jail once her case goes to court, the couple’s lawyer, Zhanargul Sundetkaliyeva, told Eurasianet. That is because her incitement charge relates to activity on “media or telecommunications networks,” which is how investigators are choosing to view Telegram. Since the potential catchment audience is huge, goes the reasoning, the penalty is more severe than what is envisioned for old-fashioned leafleting.

It is the potential reach of apps like Telegram that spooks governments like those in Russia and Iran. Both those countries blocked the app this year, ostensibly on national security grounds, but usage remains high thanks to circumvention techniques. Since censorship is technically complicated, authorities have focused on deterrence.

In Iran, authorities fear “public [Telegram] channels which have traction with wide audiences” and “target certain cases, often as a means to make an example out of users,” Mahsa Alimardani, a researcher at the Oxford Internet Institute, told Eurasianet.

With Jumayev, a 43-year-old with a monthly salary of $350 and a pile of loans to pay off, Astana is going for a similar approach.

“If you have Telegram on your phone, you are already a suspect,” complained Batyr Abayuli, an activist who attended the first hearing of Jumayev’s trial on August 14.

Several people monitoring the trial are concerned that the presiding judge, Aralbai Nagashibayev, has a track record of overseeing intensely politicized cases.

He ruled in a high-profile trial of oil workers accused of whipping up unrest in 2011 in the western town of Zhanaozen that left more than a dozen people dead – many of them shot by police officers.

Sundetkaliyeva, the couple’s lawyer, has indeed noted that the judge has ridden roughshod over basic niceties. Nagashibayev dismissed several of the defense's procedural pleas and appeared to dissemble about the availability of transport to deliver Jumayev to the court for one of the hearings. He also banned taking photos in the courtroom.

Although Telegram’s end-to-end encryption allows on paper for a strong degree of confidentiality, the reality is that cracking online groups is child’s play. Dissident groups are riddled with security service infiltrators, and messaging apps are no exception.

Abayuli, the activist, said he was taken in for questioning in May by a policeman who identified him in a DVK-affiliated chat group. He was released the same day.

In other cases, the apps can serve as means for incriminating and smearing unsuspecting targets. Aktau-based journalist Saniya Toiken, who has received international recognition for her work in western Kazakhstan for RFE/RL, claims she almost fell victim to attempted entrapment.

“I was checking an [opposition] group to see if people were going to attend a meeting that had been called and I saw a user with my name calling for Aktau residents to gather and protest,” Toiken told Eurasianet.

Sensing a trap, Toiken stopped what she was doing, went home and locked the door. Policemen duly turned up at her apartment, knocked on her door for several hours and asked her neighbors where she was before giving up the chase, she said. The following day, Toiken filed a complaint with the police about the fake account.

“I was going to go to the place of the meeting as a journalist, but I realized they wanted to frame me as a participant [in the meeting],” she said.

Chris Rickleton is an Almaty-based journalist.