Government critics immediately began speculating about a foreign plot, which authorities have ruled out. 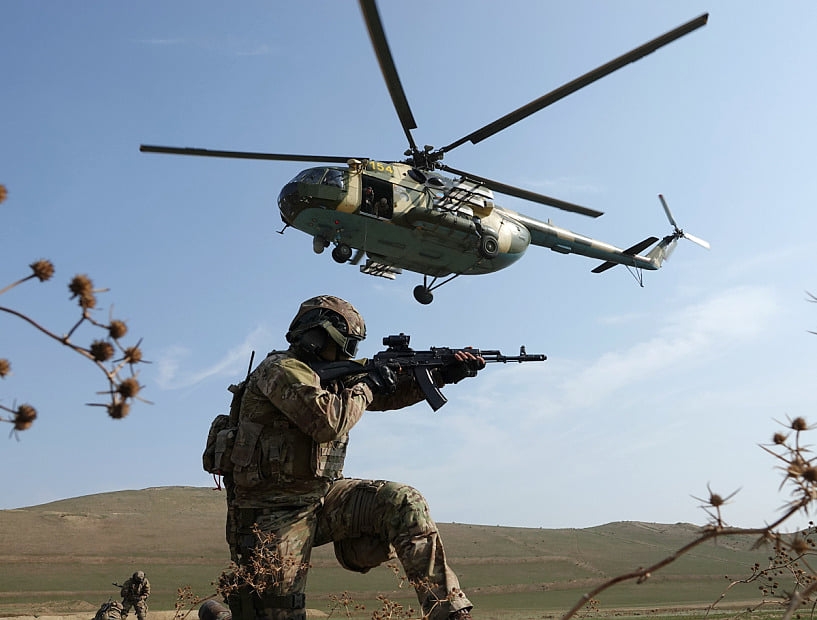 The transport helicopter was a MI-17 similar to this one seen during a training earlier this year. (Azerbaijan MOD)

A military transport helicopter belonging to Azerbaijan’s State Border Service crashed north of the capital on November 30 with 18 officers on board, killing 14.

Two more were wounded when the Russian-built MI-17 crashed shortly before landing at the Garaheybat training ground. The dead included a colonel, a lieutenant colonel, five majors, four captains, a senior lieutenant, and a lieutenant. The wounded were hospitalized, but their condition is satisfactory, the Border Service reported.

Officials moved quickly to deny rumors that the crash was caused by foreign interference. The General Prosecutor’s Office on November 30 opened a criminal investigation to consider “pilot negligence, a technical malfunction in the helicopter [and] weather conditions.”

In a press briefing shortly after the accident, the chief of Azerbaijan’s Border Service, Colonel-General Elchin Guliyev, said that the helicopter was “almost new, and repair works were conducted on it a short time ago.” He stressed that there should be “no conversation on any external influences” playing a role in the crash.

A surviving lieutenant colonel, Emil Jafarov, told cable television REAL TV on December 1 that the helicopter crashed shortly before landing, and that the crew felt no “technical malfunction.” Asked if the vehicle was overloaded, he said the MI-17 had “capacity of 24 people.”

Baku did not immediately release the number and names of the casualties in keeping with procedure in many countries where next of kin are first notified. But that gave impetus to the rumor mill. Many, including serious analysts, confidently claimed that the crash was the work of some nefarious foreign government and that Baku was working to bury a conspiracy.

“The enemy calmly continues its business. It achieved several of its targets with one ‘accident’,” wrote Arastun Orujlu, director of the Baku-based East-West Research Center, on Facebook. Without naming this “enemy” – but suggesting he meant Russia – Orujlu insisted the crash was an attempt to ensure Azerbaijan “buys all weaponry and equipment from the enemy” and that Azerbaijan “operates in the Caspian Sea” only “with the enemy.”

Orujlu justified his arguments by noting that the government had dismissed the idea of foreign interference “in such a short period of time,” and that prosecutors were considering pilot error “without waiting for the opening of the helicopter’s black box.”

Those who believe the crash was caused by a technical malfunction also blamed the government, arguing that any faulty equipment could be linked to official corruption, which is widespread in Azerbaijan.

Journalist and regime critic Mehman Huseynov wrote that there is a need to investigate the “identities of those who buy and give to the army old, expired equipment,” and only then “everything will be cleared.” Huseynov is known for exposing graft among high-ranking officials in Azerbaijan.

On December 1, General Prosecutor Kamran Aliyev responded to critics, telling journalists that some people “use this tragedy for political gains.”

“The most serious measures within the law will be taken against them,” he said.