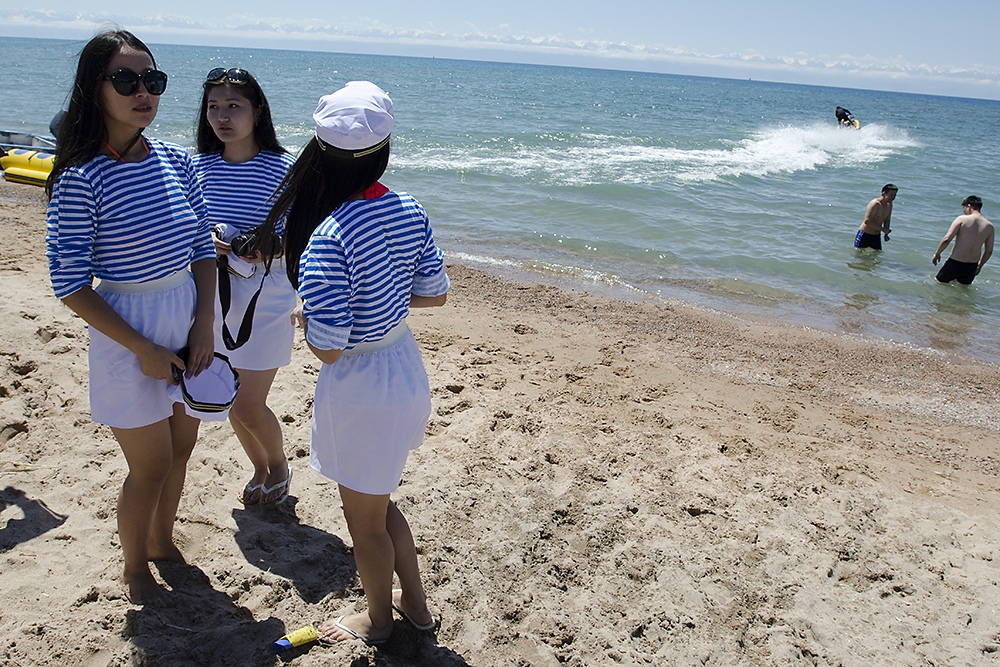 University students from Almaty, Kazakhstan, visit a beach on the northern shore of lake Issyk-Kul near the town of Bosteri in July 2014. Kyrgyzstan recently announced it planned to reduce the amount of time citizens of Kazakhstan could spend on its territory without registering from the current 30 days to five days. (Photo: Dean C.K. Cox)

Careless remarks by a minister in Kazakhstan touched off a diplomatic dispute with Kyrgyzstan and are now causing a backlash in his home country too.

It all started earlier this week, when Culture and Sport Minister Arystanbek Mukhamediyuly digressed from his praise of the works of celebrated Kyrgyz author Chingiz Aitmatov to grossly patronize Kyrgyz citizens working in Russia.

“It is such a pity when you fly into Moscow or other cities and see that public toilets are being cleaned by young girls from our neighboring country. This cannot but offend one’s sensibilities. What could she have done to deserve this and at such a young age — to have to clean a public toilet?” the minister was cited as saying by Tengri news website.

Understandable outrage in Kyrgyzstan was quick to follow. Kyrgyzstan’s Foreign Ministry summoned Kazakhstan’s ambassador to express dismay in a note of protest. “The offensive and unconsidered tone adopted by Mukhamediyuly toward the Kyrgyz Republic, which has caused a great deal of negative reactions among the public in Kyrgyzstan, does not overall live up to the spirit of alliance underpinning Kyrgyz-Kazakhstani relations,” the Foreign Ministry said.

The ministry hinted it had recorded a spate of recent cases in which officials and television stations in Kazakhstan had failed to accord Kyrgyzstan respect.

In an apparent reprisal, Kyrgyz authorities announced a plan to reduce the amount of time citizens of Kazakhstan could spend in Kyrgyzstan without registering — from the current 30 days to five days. That announcement was aired by the deputy chair of the Kyrgyz Migration Service, Almazbek Asanbayev, during a roundtable on the Eurasian Economic Union, a trading club that was designed to bring its members — Russia, Kazakhstan, Kyrgyzstan, Belarus and Armenia — closer together.

“We want to introduce parity and reduce the number of days that Kazakhstanis can be here to five days. According to EEU rules, they should give Kyrgyz citizens the right to be in the country without registration for up to 30 days, but for some reason the issue has been dragged out by Kazakhstan,” Asanbayev said in remarks quoted by Sputnik news agency.

Such a move would be self-defeating given how much money tourists from Kazakhstan plough into Kyrgyzstan’s economy, particularly during the summer months, when the resorts on Issyk-Kul Lake fill up with Kazakhstani vacationers.

Talk of modifying registration rules have served as a timely reminder of the limited progress in breaking down borders between Kazakhstan and Kyrgyzstan, despite the latter joining the EEU last spring. Frontier crossings still see time-consuming lines, and trade embargoes still remain the norm, particularly since standards harmonization within the EEU remains weak.

Astana earlier this month slapped a ban on the import of potatoes from Kyrgyzstan, stating that it had recorded 79 separate cases of worm-infested vegetables being brought into the country.

On a more positive note, there are recurrent noises about construction of a new highway linking the two countries to shorten the distance between Kazakhstan’s business capital, Almaty, and the Kyrgyz town of Cholpon-Ata, which lies on the shores of Issyk-Kul.

Mukhamediyuly gradually got around to apologizing, albeit grudgingly, and only through a letter written by his deputy, Galym Ahmedyarov.

“We are certain that the Kyrgyz people, having a colossal and bright history and culture … can expect a great historical future and economic prosperity,” Ahmedyarov said. “We once again wish to give our assurances that Minister Arystanbek Mukhamediyuly holds the Kyrgyz people in great regard and that his words were not intended to offend anybody.”

Anybody watching the news out of Kyrgyzstan in recent months should have been aware of the hair-trigger sensitivities that can be aroused by perceived slights concerning Kyrgyz national pride. Late last year, a British employee at Kyrgyzstan’s largest private foreign investor, Centerra Gold, provoked widespread rage by likening a local culinary delicacy, chuchuk, to a “horse penis” on his Facebook page.

Trade issues aside, the Kyrgyz have long bristled at what they perceive as the condescending attitude of their richer northern neighbors.

Andrei Grozin, a Central Asia expert at the Institute for Countries of the Commonwealth of Independent States in Moscow, explained in a recent interview that this air of superiority might be dissipating with the times, however.

“Citizens of Kazakhstan have until recently lived in the certain belief, which has been transmitted to them from the top, that you can throw money at any problem: ‘We are an oil state, a petro-state, everything is tip-top,’” Grozin told ZONAkz website. “They saw Tajik and Kyrgyz labor migrants who were doing all the hard and dirty work and they thought: ‘We’re not like that!”

Even though Kazakhstan’s economy easily outstrips that of Kyrgyzstan — the former nation’s gross domestic product per capita in 2014 was around $12,600 as compared to the latter’s $1,300, according to World Bank data — times are becoming harder in Kazakhstan.

Some analysts, like those at the London-based Economist Intelligence Unit, even predict that Kazakhstan could be set for its first year of negative growth in nearly two decades in 2016. Not that this has apparently fostered much empathy among Kazakhstan's officialdom.

Bektour Iskender, founder of the Bishkek-based Kloop.kg website, suggested Kyrgyzstan take the high road over this diplomatic spat — one that could even serve it in good economic stead. The two proposals he outlined in a comment piece on the ongoing furor were to allow Kazakhstanis to remain on Kyrgyz soil for an unlimited period and to automatically grant Kyrgyz citizenship to Kazakhstanis living in the country for more than three months.

“The longer they are here, the more money they will spend and the more money will pour into our country’s economy. How could we in sane mind turn down such money?” Iskender wrote.