The country has one of the highest debt-to-GDP ratios in Europe, a situation exacerbated by the pandemic. 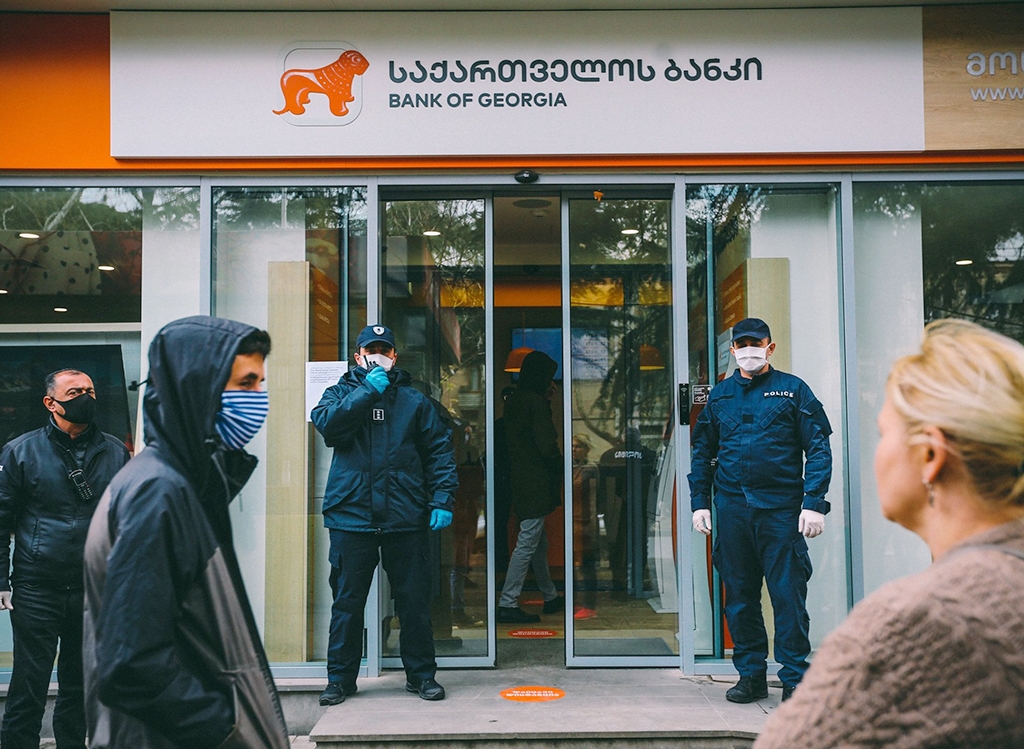 When a young man walked into a payday lender in Tbilisi and took 19 people hostage on November 20, brandishing what appeared to be a rifle and hand grenades, it looked at first glance like a simple robbery.

But the would-be robber, 31-year-old carpenter Levan Zurabashvili, did not ask for money. Instead, he demanded the Georgian government implement several policy changes.

“First off, gambling must be banned all across Georgia,” Zurabashvili said, as the scene played out on live television. “Second: annual interest rates on bank loans must be fixed at no more than 7 percent.”

Some of the hostages interrupted, arguing that 7 percent would still be far too high. “In the European Union the rate is about 3 percent,” one man pointed out.

“Can I finish?” Zurabashvili asked.

His third and final demand was to set a 10 percent cap on pharmaceutical companies’ profits as a way to lower drug prices. “It is mainly old people who purchase medication and their pensions are only 250 lari” (about $75), he said, explaining that banks trap senior citizens with expensive loans that they need to cover medical bills but are unable to pay off.

Listening to the attacker, many Georgians could not help but nod in agreement. Over the last several years, Georgians have been sliding into debt. Roughly 80 percent of Georgia’s households owed a collective $5.5 billion (31 percent of GDP) on bank loans in 2018, the last year for which detailed figures are available from the National Bank. Unknown more owe subprime lenders.

The figure puts Georgia toward the top of the list of European countries in terms of the amount of consumer loans relative to the size of the national economy, and significantly higher than neighbors Armenia and Azerbaijan.

While well-off households can take loans to improve their financial flexibility, an increasing amount of debt is being taken on by the poorest Georgians, for whom it can exacerbate their precarious situation, a 2018 World Bank study found.

And Zurabashvili’s hostage had a point about the EU. In the richest European countries, such as France and Germany, banks do offer household loans at an average interest rate of 4 percent, while in Georgia it’s a steep 17 percent, according to National Bank data. Payday loan companies, like the one Zurabashvili attacked, offer even higher interest rates in exchange for lax credit history checks, luring many Georgians into a debt trap.

While gambling is a significant contributor to the debt problem – and it later was reported that Zurabashvili himself had had gambling problems – his most resonant demand was about senior citizens and their medical debt.

Given the country’s meager pensions, elderly Georgians – unless they are supported by their children – usually need to borrow money just for day-to-day expenses. About half of retired Georgians have bank loans. And the institution that has a virtual monopoly on the distribution of pensions, Liberty Bank, also charges a whopping 31 percent annual interest rate to borrowers on pensions.

Because they have steady, albeit small, incomes, Georgians on pensions are often the only members of poor families who are eligible to get credit at all. That means they borrow on behalf of the entire family, as well as to pay for their own medication. On average, Georgian pensioners spend between 65 and 80 lari ($20-25) a month servicing debts, Mikheil Svanidze, a Tbilisi-based sociologist, told Eurasianet.

On the day of Zurabashvili’s attack, he had tried to buy medication for his mother but couldn’t afford it, the mother, Lamara Tereladze, told reporters. “He was upset that he could not buy me my medication … and probably also had a few drinks, and he did what he did,” she told the local news site Formula. Tereladze said that she and her son also had borrowed from several banks to pay for Zurabashvili’s now-deceased father’s medical treatment. They spend most of their income paying off these loans, she said.

“That boy [Zurabashvili] was right about everything,” said Tsitsino Alaverdashvili, an 85-year-old from Kakheti in eastern Georgia. Alaverdashvili makes ends meet selling sunflower seeds, hand-knit socks and churchkhelas – a traditional grape-and-nut candy – on the street in the tourist town of Sighnaghi. Alaverdashvili suffered a heart attack in the summer and the state medical insurance only paid for part of the treatment. “The rest I had to borrow from a bank or get from relatives,” Alaverdashvili told Eurasianet. “Now I have to sell things in the streets to pay back the bank and to buy medication.”

While debt had been a significant problem for financially vulnerable Georgians before 2020, with the arrival of the COVID-19 pandemic the country’s entrepreneurs were hit, as well.

2019 was the best year for Nika Vacheishvili’s small business, an elegant little guest house and winery in the Ateni Gorge, about 60 miles south of Tbilisi. “The hotel was booked up every single day, people also were coming here for weddings and birthday parties,” Vacheishvili told Eurasianet.

Vacheishvili and his family had moved in 2010 from Tbilisi to Ateni, where dramatic cliffs hang over a vineyard and a seventh-century basilica. They built a house, set up a farm and began making wine. Eventually the estate developed into a flourishing tourist destination and their wine output grew from 100 bottles to 4,000 bottles a year.

They outgrew their house-turned-guesthouse and took out a loan to build a 19-room hotel, as well as two smaller loans to buy goats, expand their restaurant, set up a conference space and build hiking trails. The new hotel opened last year. “It was booked up immediately. Even the bank couldn’t believe how well we were doing,” he said.

But then the pandemic hit and Vacheishvilis, like many other Georgian hoteliers and restaurateurs, found themselves on the brink of bankruptcy. With the nation under lockdown, “we have absolutely no business, except maybe selling a few bottles of wine here and there, and we have three loans to pay off,” Vacheishvili said.

The state steps in

As part of its economic crisis relief program, the government is picking up the tab for 6 percent of monthly payments on debts for small and medium-size hotels. This aid, combined with his salary as a university professor, is helping Vacheishvili meet his obligations for now, but the relief program will end in March. “I’m trying not to panic now,” he said. “I’ll panic in March.”

Ahead of the 2018 presidential elections, the billionaire head of Georgia’s ruling Georgian Dream party, Bidzina Ivanishvili, bailed out as many as 600,000 delinquent borrowers across the country, with his private charity foundation picking up the tab for outstanding debts totaling $1.5 billion. The bailout, criticized as a vote-buying scheme, was meant to wipe the slate clean for struggling borrowers.

The government also tried to rein in the worst excesses of the payday loan industry by halving the maximum allowable interest rates (from 100 to 50 percent) and capping the penalties for past due payments. These measures got rid of much of Georgia’s bad debt, but debt levels began climbing up again the following year.

Then, COVID-19 struck. With furloughs, layoffs and business closures, many Georgians, including business owners like Vacheishvili, went under or were close to doing so.

In its attempt to mitigate the economic crisis, the Georgia government is not behaving very differently from ordinary Georgians. The state also has been on a borrowing binge this year, taking loans from international financial institutions to help meet its commitments, primarily social security payments.

By the end of 2020, government debt was projected to reach a record $8.4 billion, close to 60 percent of gross domestic product. Under Georgian law, that’s the maximum the state is allowed to borrow. Although richer economies like Japan and the United States have far higher debt-to-GDP ratios, local analysts are troubled by the rising debt, as the Georgian economy is shrinking and its currency is depreciating.

“The fiscal system is becoming increasingly vulnerable in the face of potential future economic shocks,” the local branch of Transparency International, the corruption and good governance watchdog, wrote in a recent report.

With debt an increasingly hot topic in Georgia’s national conversation, Zurabashvili’s demands spoke to a vast audience. Many saw him as a hero who stood up for the poor and spoke truth to power. Others, though, argued that the modern-day Robin Hood was mentally troubled, and possibly drunk when he carried out his famous deed.

Either way, his act became increasingly ludicrous throughout the day. Some hostages simply excused themselves and left, meeting no resistance from Zurabashvili, and he eventually turned himself in. Claiming credit for successfully carrying out a “special operation,” the police disarmed Zurabashvili of his weapons, which turned out to be toys.

Supporters soon began signing petitions to ask for Zurabashvili’s pardon and raising money for his bail. Others watched these efforts with anger and disbelief. Some cautioned against glamorizing crime.

“Romanticizing hostage-taking […] is unacceptable,” Ombudsman Nino Lomjaria told reporters on the day of the attack. “We have a parliament to make social and political demands, to argue and fight.” The incident should serve as a lesson to politicians to be in touch with voters and understand their needs, she added.

Pending his trial, scheduled to begin this month, Zurabashvili is now undergoing mental health examinations. His mother made a tearful plea to the nation to pardon his son. “I condemn what he did. I’d like to apologize to everyone who was put through distress by Levan on that day,” she said following her son’s arrest. “Please forgive him and forgive me.”