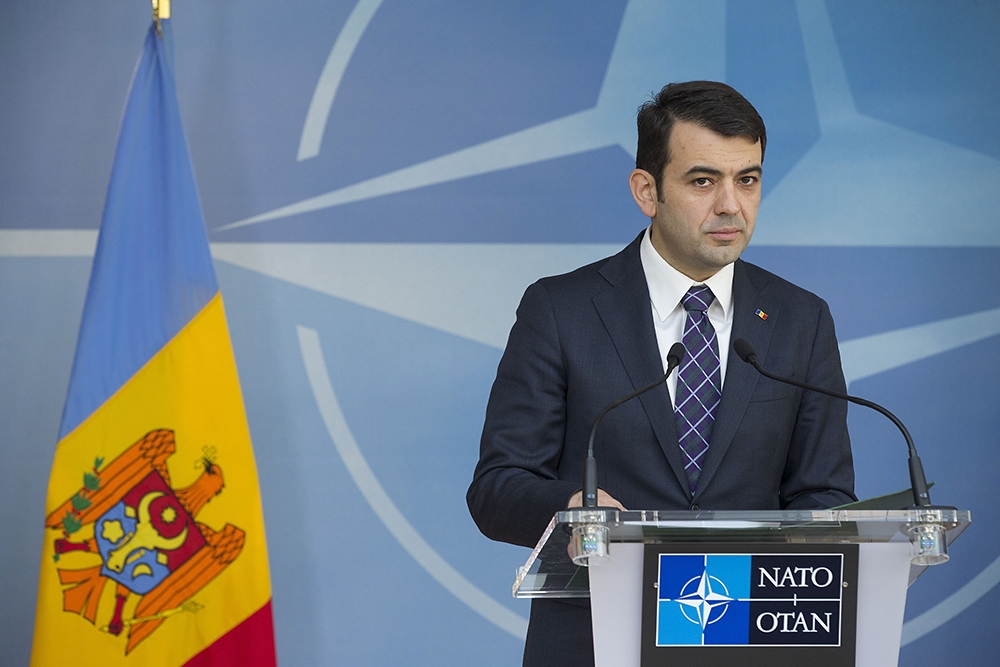 Moldovan Prime Minister Chiril Gaburici, seen here in mid February 2015 at NATO headquarters in Brussels, wants to make the fight against corruption a key government issue. The government’s sudden focus on reform and anti-corruption measures comes on the heels of several weeks of protests by tens of thousands of Moldovans angry about several banking scandals. (Photo: NATO)

Thirty-eight-year-old Moldovan Prime Minister Chiril Gaburici has made a lot of reform promises. But after seeing hundreds of millions of dollars vanish in a banking scandal, Moldovan taxpayers’ patience is wearing thin.

Popular frustration with Moldova’s corruption woes – the country ranks in surveys as one of Eastern Europe’s most graft-inclined countries – bubbled over earlier this month after the release of a report commissioned by the National Bank of Moldova. The report analyzed the November 2014 collapse of three Moldovan banks – the privately run Unibank, Banca Sociala and Banca de Economii, in which the state held a minority share.

Prepared by the US-based consultancy firm Kroll, the report implicated 28-year-old Moldovan multimillionaire businessman Ilan Shor in a complex web of fraudulent deposits to the three banks that, in turn, supplied money to Shor’s businesses. The National Bank of Moldova ultimately loaned the trio 16 billion leu (over $908.6 million) in a failed effort to keep them afloat.

Coming on the heels of a $20 billion money-laundering scandal that also involved Banca de Economii, this latest scandal enraged voters. Annual purchasing power per capita in Moldova stands at $4,000, one of Europe’s lowest rates.

“I thought that only the Prut River separates us from the European Union, but it seems that more divides us – namely, theft, corruption and poverty,” said 58-year-old Valeriu Doronceanu, a farmer from Nemțeni, a village 83 kilometers southwest of the Moldovan capital Chisinau. “The saddest thing is that we are robbed and nobody is punished.”

Prosecutors have placed Shor, the case’s prime suspect, under house arrest for a month in Chisinau. His arrest occurred two days after an estimated 20,000 people took to the streets of the capital, a city of over 660,000, on May 5 to call for tougher anti-corruption measures and stiffer punishments for those guilty of graft.

Octavian Țâcu, a professor of history and international relations at the Free University of Moldova, believes the government now faces its most “critical situation” since 2009, when protests over election fraud eventually prompted fresh general elections and the end of the Communist Party’s rule. This time, “the public discontent is not only on the left, pro-Moscow and Soviet-nostalgic side, but also on the center-right, which until now had massive support,” noted Țâcu.

Independent economist Gheorghe Costandachi said the scandal could end up damaging public support for Moldova’s effort to move closer to the European Union. The growing perception is that “Moldova has been plundered by some guys who were entrusted in 2009 by citizens with the road to EU integration,” commented Costandachi.

Back in Nemțeni, where villagers last week gathered in front of the local House of Culture to debate the events in Chisinau, residents echoed that view.

“If in 2009, I gave my hopes and vote for a pro-European government, … now I do not believe anyone,” said 47-year-old homemaker Vera Rusu.

“They were stealing like bandits in forests,” Rusu continued, “while telling us nice words on television about fighting corruption.”

As public anger builds, Prime Minister Gaburici is busy planning changes – with some outside help. At a May 13 cabinet meeting, he prioritized anti-corruption measures. He also criticized “problematic banks,” and said that “a team of reformers” was examining best practices elsewhere, including Ukraine, Georgia, Poland.”

A new voice could soon join the reform discussion. Former Georgian President Mikheil Saakashvili, something of a regional celebrity for corruption busting, is expected to visit Moldova later this month “to propose a series of clear actions in the fight against corruption,” Gaburici told reporters on May 7.

Gaburici has stated that by August he intends to reform the police (a move also championed by Saakashvili), the National Anti-Corruption Center, and the National Integrity Commission, an entity charged with monitoring conflicts of interest among officials. “The management of these public institutions should be selected in a transparent manner by an independent commission,” he declared.

A draft law intended to shield the general prosecutor’s office from political influence also was passed by parliament on May 8.

But not all Moldovans expect this recent flurry of action to have much of an impact. Costandachi, the economist, contended that statements about reform only serve to distract “public opinion from the most serious and important problems in society; namely, plundering the state.”

The Moldovan government, he said, should “capitalize on support from the EU for eradicating corruption and reforming the judiciary system” rather than looking to “Georgia or Ukraine, countries which are barely out of the clutches of corruption.” He added that experience from Romania, which shares close cultural ties with Moldova, could also provide an “immediate solution.”

Other observers remain hopeful. Denis Cenușă, an economic analyst at the Expert Group think-tank in Chisinau, believes the initiatives could help revive the government’s fortunes. Neither Gaburici nor his aides responded to attempts by EurasiaNet.org for comment on reform plans.

Victoria Puiu is a journalist who writes for the weekly newspaper Timpul (Times) in Chisinau, Moldova.