Moldova: Can an Apple a Day Keep Russia at Bay? 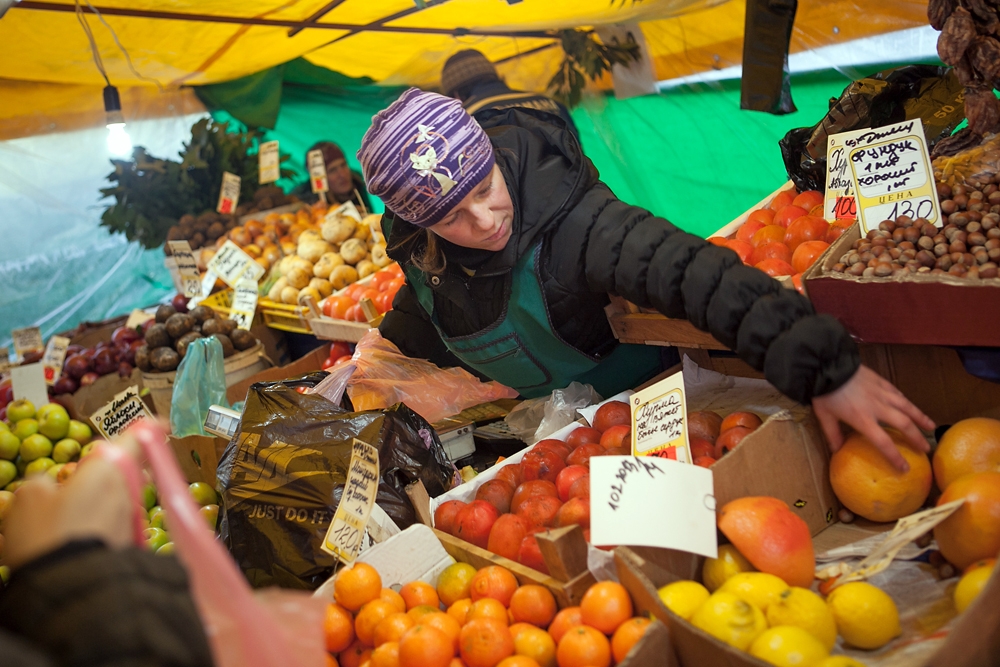 A woman sells fruits and vegetables in a weekend market near Moscow's Frunzenskaya Metro Station in February 2013. Last month Russia imposed an embargo on agricultural products from Moldova, possibly as a retaliation for Moldova’s free-trade deal with the EU. (Photo: David Trilling)

With apple-picking season underway in Moldova, Vasile Nitrean, a farmer in Soroca, a northeastern town near the Ukrainian border, says he has “big problems.” For the past 15 years, he has sold his crop to Russian buyers. Now, because of a Russian ban, he, along with many other farmers, needs to find a new market, and fast.

“We will gather [the apples] as we once did to export them to Russia, only this time we will take them and place them in front of the [Moldovan] government [building],” Nitrean said, fuming.

The moves against Moldova are widely seen as retaliation for the country’s decision to sign a free-trade deal and association agreement with the European Union, which Moscow sees as encroaching on its traditional sphere of influence.

That means finding alternative markets has become not only an economic necessity for Moldova, but a political one.

Prime Minister Iurie Leancă has announced government-sponsored measures to promote agricultural exports, including a farmers market set up on National Square in the capital, Chisenau, from August 27-31. In addition, a publicity stunt is slated for August 30, when a massive apple pie, dubbed by the prime minister “the pie that unites us,” will be baked and consumed.

Leancă has pledged an unspecified amount of compensation from both state and unidentified foreign sources to help farmers make up for lost revenue, as well as assistance for the rescheduling of bank loans, and payment of gas and electricity bills. Moldovan canning companies also reportedly have agreed to purchase more fruit. The state-subsidized airline, Air Moldova, is slated to start distributing government-purchased apples and other fruit to passengers as an in-flight perk. The government additionally has allocated roughly $1.44 million (20 million Moldovan leis) to provide Moldovan apples daily to kindergartens, public schools and the army starting on September 1.

Denis Cenusa, an economic analyst at Chișinău’s Expert Group, an independent think-tank, believes Moscow timed the embargo to weaken support for the government and its EU ambitions ahead of Moldova’s November 30 parliamentary elections. “Russia wants to attract Moldavians against the pro-European government,” said Cenusa.

No polling data has yet been published on how the Russian ban has impacted support for the incumbent Moldovan government. But protests have occurred. For example, on August 7, a three-kilometer-long convoy of angry farmers from northern Moldova drove their farm equipment toward Chișinău to highlight their financial plight. Some have demanded that Moldova scrap its free-trade deal with the EU, while others have argued for Moldova and the EU to agree on export prices with Russia. Urging them to “put politics aside,” Prime Minister Leancă intercepted the protesters en route to Chișinău.

Although that protest appears contained for now, discontent remains widespread. Iurie Plopa, a farmer from Ocniţa, a northeastern region, claims that the government compensation plan for lost apple sales – amounting to 1.50 lei ($0.11) per kilogram – is minimal, and lower than the two-lei ($0.14) cost of production. “Automatically, we lose money,” he said. “And it’s not enough money to cover loans or pesticides.”

Meanwhile, authorities in the autonomous region of Gagauzia, home to a minority group long wary of the EU, have announced a desire to keep exporting fruit to Russia, and have invited Russian inspectors to come and certify its stock. Governor Mihail Formuzal has announced that the region, which already has an exemption from the Russian embargo on Moldovan wines, wants to establish “personal ties” with Russia.

Keeping the lid on discontent in the countryside may hinge on the EU, which doubled its quota of duty-free imports of Moldovan fruit on August 1, a month ahead of schedule. Some observers are not holding their breath that the EU can or will come to the rescue, noting that Russia hit Brussels with a comprehensive ban in early August, that could put the squeeze on EU farmers, creating a glut that increases competition and lowers prices for Moldovan produce.

Many hope neighboring EU-member Romania, with which Moldova shares strong historical and cultural ties, will lend a helping hand. Deputy Moldovan Agriculture Minister Vladimir Loghin believes that the Romanian market could “absorb at least 20 percent of the country’s quota for the EU."

According to the prime minister, Romania intends to buy 14,000 tons of Moldovan apples, which would account for 17.5 percent of Moldova’s EU quota of 80,000 tons. Romania, which has its own sizable agricultural sector, has purchased only 3 percent of the 20,000-ton quota for plums, however.

While Moldovan fruit quality has improved in recent years, promotion and packaging skills remain a work-in-progress, said Jim Herne, director of the US Agency for International Development-funded Agricultural Competitiveness and Enterprise Development program in Moldova. The need to adapt to EU quality and technical standards poses still another hurdle. “If they wish, for example, to benefit from a request from a European supermarket, they will have to unite and promote their goods as a group,” Herne said.