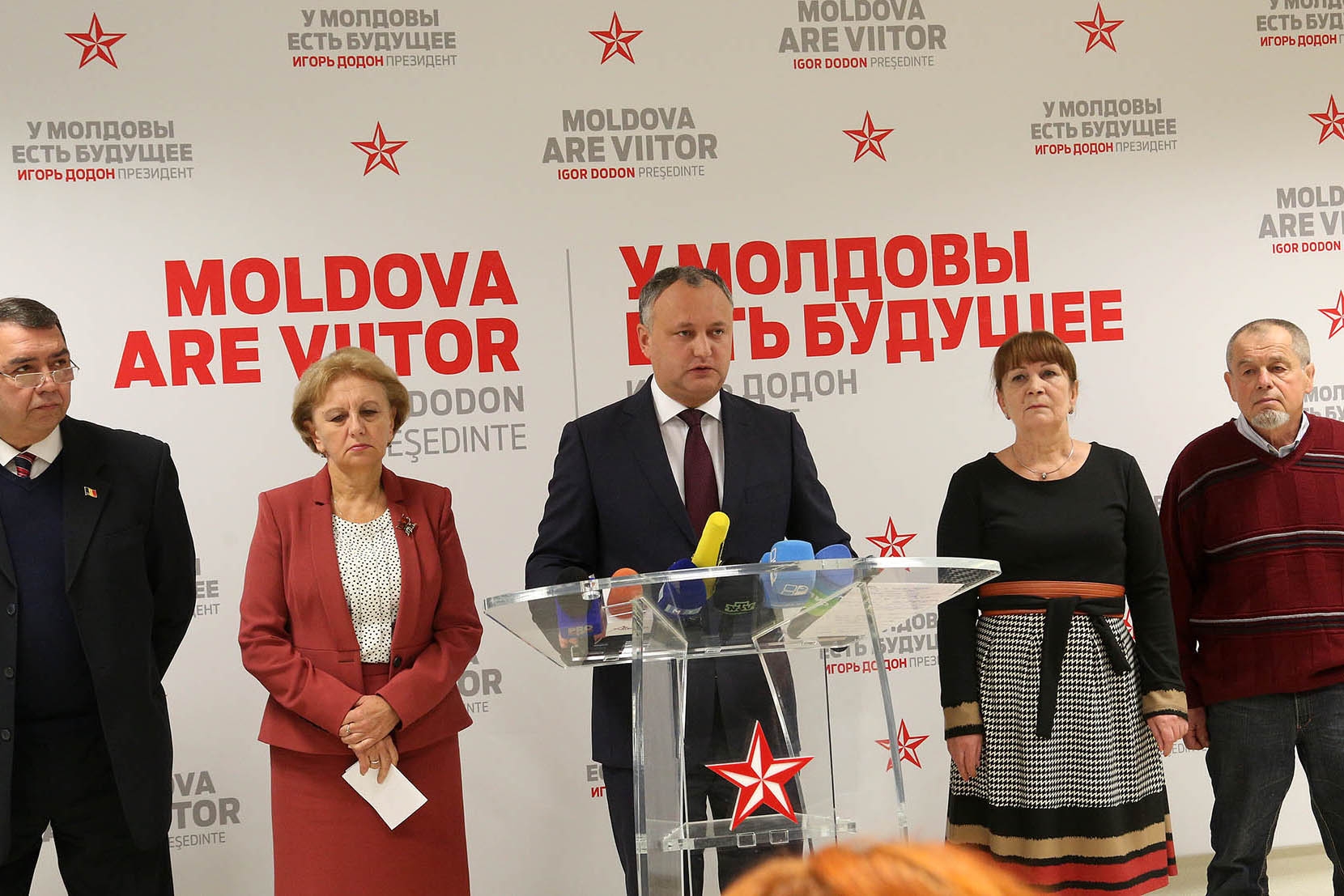 Direct presidential elections will be held in Moldova on October 30. Right now, polls indicate that the winner could be the Moscow-friendly Socialist Party leader Igor Dodon, a 41-year-old economist who appears to believe that the country’s future prosperity and security depend more on Russia than on the European Union.

Tired of a moribund economy and relentless corruption scandals involving Moldova’s incumbent, pro-Western leadership, many voters appear ready for a change. Eighty-two percent of 1,516 Moldovans surveyed in a September poll for the Washington, DC-based International Republican Institute (IRI) said they believe the country is headed in the wrong direction.

“There are abandoned plots of land and orchards and everyone promises that they will do something [about the economy],” complained Ion Postolachi, a former tractor driver from the eastern district of Dubăsari. “Now we want to see what Dodon will do.”

The IRI survey found that 30 percent of its respondents favored Dodon’s candidacy.

Moldova in 2014 signed an association agreement with the European Union. The extent to which Dodon’s potential election as president could change Moldova’s geopolitical course is difficult to judge.

Under Moldova’s political system, the prime minister wields more executive powers than does the president, who was previously chosen by parliament. Nevertheless, an elected president could exert considerable influence on Moldova’s foreign and domestic policies, while claiming a popular mandate.

The president can propose legislation, issue decrees and ask parliament to reconsider laws with which he or she does not agree. Or dissolve parliament altogether. He or she can also initiate treaties, subject to parliamentary ratification, with outside powers.

With Dodon, a former minister and deputy minister of economics under two communist governments, the outside power most likely to benefit from his election is clear: “Moldova has a future! In friendship with Russia,” reads one of his campaign slogans.

Dodon claims an “aggressive campaign” is now afoot in Moldova to agitate for the country’s unification with Romania. If elected, he has pledged that one of his first decrees would be to criminalize any calls for reunification. “I'll take the initiative to ban by law unionism in all its forms,” a statement issued by his campaign reads. “These actions must be punished criminally.”

With Moldova’s largely agricultural economy on the skids (annual per capita income in 2015 stood at $5,000, lower than in Laos, according to the CIA World Factbook), support for reunification with Romania has become more visible in recent years. However, neither the Moldovan nor the Romanian governments officially support such a proposal.

Dodon’s wariness of Romania is not so much connected to patriotism as it is about Russia’s own interests, some observers believe.

Ultimately, his focus on “the revival of the Moldovan nation … is about restoring ties and relations with Russia,” argued Dan Dungaciu, director of the state-run Romanian Academy’s Institute of Political Sciences and International Relations in Bucharest. “Extreme Moldova-nism leads, eventually, to Russia and federalization."

Russia has long perceived Romania, a member of the North Atlantic Treaty Organization (NATO), as a potential threat to its regional strategic interests. With that apparently in mind, Dodon has a second objective – declaring Moldova a “neutral” state.

"I am a supporter of peace. I will get international guarantees for Moldova’s neutrality,” he asserted in another campaign-issued statement. “NATO soldiers will not march in our streets.”

Another of Dodon’s priorities is finding a political settlement that would enable the breakaway entity of Transnistria to reintegrate with Moldova. Russia’s role in promoting Transnistrian reintegration would be critical, given that the breakaway territory’s Russian-speaking separatist leaders have agitated for it to become part of Russia.

Dodon’s stance on Transnistria could reinforce his appeal for many voters. “I do not want union with Romania, but with Transnistria. Let Moldova be whole, united," said Postolachi, the tractor driver.

Despite Moscow’s ongoing embargo of certain Moldovan food products, there are economic reasons for Moldova to seek closer ties with Russia, which remains one of the country’s largest trading partners and most desirable destinations for labor migrants.

Dionis Cenușă, an economic analyst with the independent think-tank Expert-Group in Chișinău, asserted that Dodon would try to steer Moldova back towards Russia’s orbit.

He “will not be a friend of the European agenda, but will try to tailor it using the few levers that his position as president will give,” Cenușă said.

For now, voter apathy may be Dodon’s most formidable competitor. A September 28 poll by Chișinău’s Center for Sociological Investigations and Marketing found that almost 30 percent of 1,108 Moldovans do not trust any of the candidates.

In this poll, Dodon gained the support of 20 percent of the respondents. Reasons for the discrepancy with IRI’s findings were not clear. A leader of the anti-corruption protests, Andrei Nastase, secured second place with the support of 7.4 percent of respondents, and Maia Sandu, a Harvard-trained former education minister, secured 6.7 percent.

The vote will go into a second round if at least a third of Moldova’s nearly 3.24-million registered voters do cast ballots. Cenușă believes that voter disgruntlement could result in a turnout of as low as 45-50 percent.