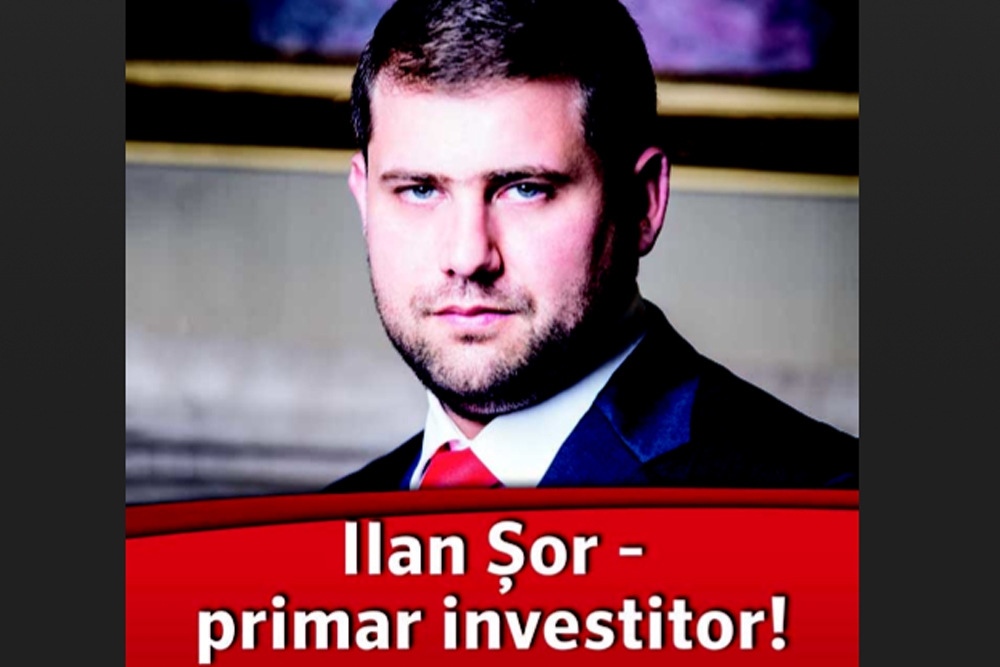 The login page for public Internet access in Moldova’s regional town of Orhei features a photo of the new mayor Ilan Şor – a prime suspect in a series of fraudulent loans by several banks that cost Moldovan taxpayers nearly $1 billion. After a month in custody, the Israeli-born multimillionaire won the mayoral race this June with 62 percent of the vote in the industrial town of about 33,600. (Mobile Phone Screen Shot)

Ilan Şor is a central figure in an allegedly complex money-laundering scheme that cost Moldovan taxpayers nearly $1 billion. But the 28-year-old businessman seems unfazed by controversy: three months ago, he became mayor of Moldova’s regional town of Orhei, and has recast himself as a “mayor-investor.”

So far, most locals seem to accept him that way.

The makeover of Şor, an Israeli-born multimillionaire, underscores the challenges confronting Moldova as it strives to clean up government and create a firewall between office holders and business.

Şor was placed under house arrest earlier this year after an investigation for the National Bank of Moldova named him as a prime suspect in a series of fraudulent loans by the private Unibank, Banca Sociala and Banca de Economii that cost Moldovan taxpayers some 16 billion lei (now about $804 million). A former board chair of the Banca de Economii, he faces charges of abuse of power.

Released from custody after a month, he then declared his candidacy for mayor of Orhei, an industrial town of about 33,600, located some 50 kilometers north of the Moldovan capital, Chișinău. He has family ties to the community. He won the mayoral election last June with 62 percent of the vote.

It might seem a sudden change of career for an entrepreneur whose interests have extended to banks, TV stations, the Chișinău airport and a soccer team (FC Milsami Orhei), but never before to politics.

The job does not protect Şor from prosecution. But it does give him a platform that he can use to garner public support – something that could prove important as Chișinău’s anti-corruption, anti-government protests now enter their third week.

One political analyst in Chișinău sees Şor’s win as part of a larger change, as complaints with Moldova’s pro-European Union government over corruption and jobs gather steam.

In small-town Moldova, pro-EU politicians “have nothing else to do than to join … the opposition,” said Corneliu Ciurea of IDIS Viitorul, an independent think-tank. “They have lost the confidence of the people.” Local elections this summer came down to a near-even tussle between pro-EU and pro-Russia politicians.

Married to a Russian pop singer, Şor ran for office as the candidate for the Russian-speaking Ravnopravie (Equal Rights) party, which sympathizes with Moscow. The money-laundering scheme in which Şor is implicated allegedly involved Russian companies shifting an estimated $20 billion through Moldovan banks.

In his current capacity as mayor, Şor says that his main interest is Orhei, “the city of my childhood.” In the three months since taking office, he has overseen the repair of roads, a soccer stadium and a park and made sure that each weekend features a concert or a soccer game. He uses a TV program about himself, “Ilan Şor for Orhei,” broadcast on two stations thought to belong to him (Euro TV and Elite TV), to keep locals up-to-date on municipal developments.

The source of funding for these ventures is not entirely clear. Moldovan law requires mayors to give up “functions that are incompatible” with their responsibilities as elected officials, but does not specifically bar office holders from owning and operating private businesses.

Şor is not known to have given up management of any of the companies associated with his name, including Dufremol, which operates the Chișinău airport’s duty-free section. Nor did he list them in his financial disclosure report.

In Orhei, Şor’s much-promoted projects are attributed to him. Municipal officials have posted no tenders. An extra-budgetary fund called “For Orhei” (the same name as Şor’s own 14-member faction in the town council) is cited as providing the cash for 40 new Hyundai city buses, free food for kindergartens, new sports facilities, and five discount stores for pensioners, war veterans and the disabled. A canteen for underprivileged individuals is also in the works.

Neither Şor, nor the Mayor’s Office responded to EurasiaNet.org’s requests for an interview about these programs.

The money-laundering scandal poses few concerns for many Orhei residents. “Everybody steals … but at least he is doing something for the people,” said one 35-year-old resident, who gave his name as Vasile.

If Şor “really stole something from the banks,” he would now be in jail, reasoned Irina Axenti, a 58-year-old former engineer waiting in line for a discount card to use at what is described as Şor’s, rather than the town’s, discount retail store. “That means that he is not guilty.”

Şor maintains his innocence and claims he is collaborating with investigators. A trial date has not yet been announced.

Not all Orhei residents believe that Şor’s energy can help transform this low-key town dependent on food manufacturing into a “dream city.” Complaints about a corrupt healthcare system and poverty persist.

“With a salary of 3,000 lei ($150.75), I cannot really enjoy the organized concerts. Instead, I keep thinking about what to use to dress my children for kindergarten,” said 26-year-old Viorica Zaporojan, who owns a clothing boutique in Orhei’s central bazaar.