Moldova: Negotiating the Price of Death 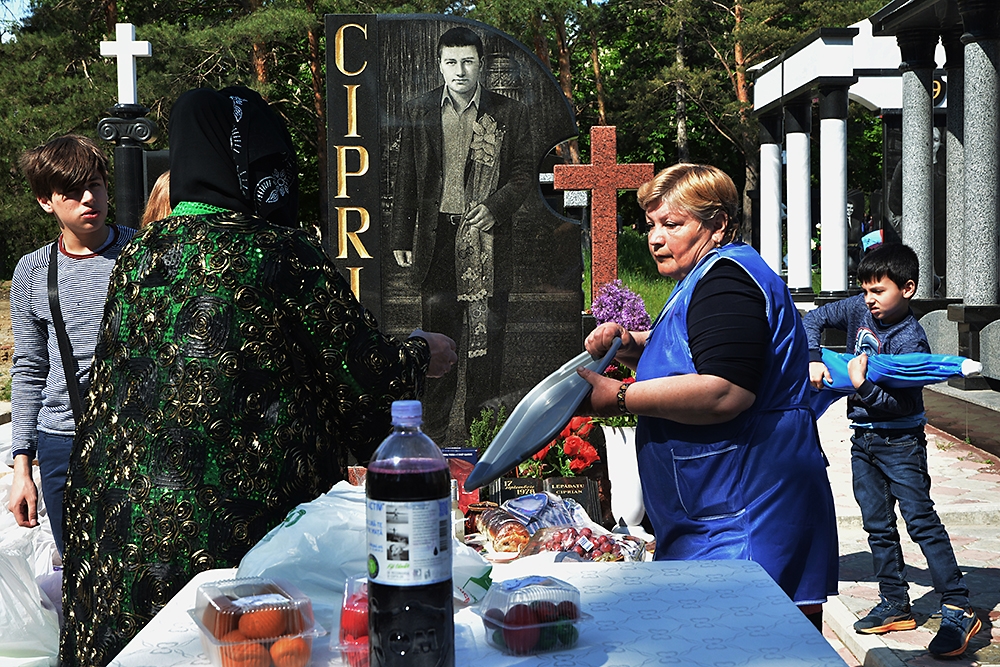 Visitors to Saint Lazarus Cemetery in Chișinău enjoy food and drink at the graves of relatives during Easter of the Dead. 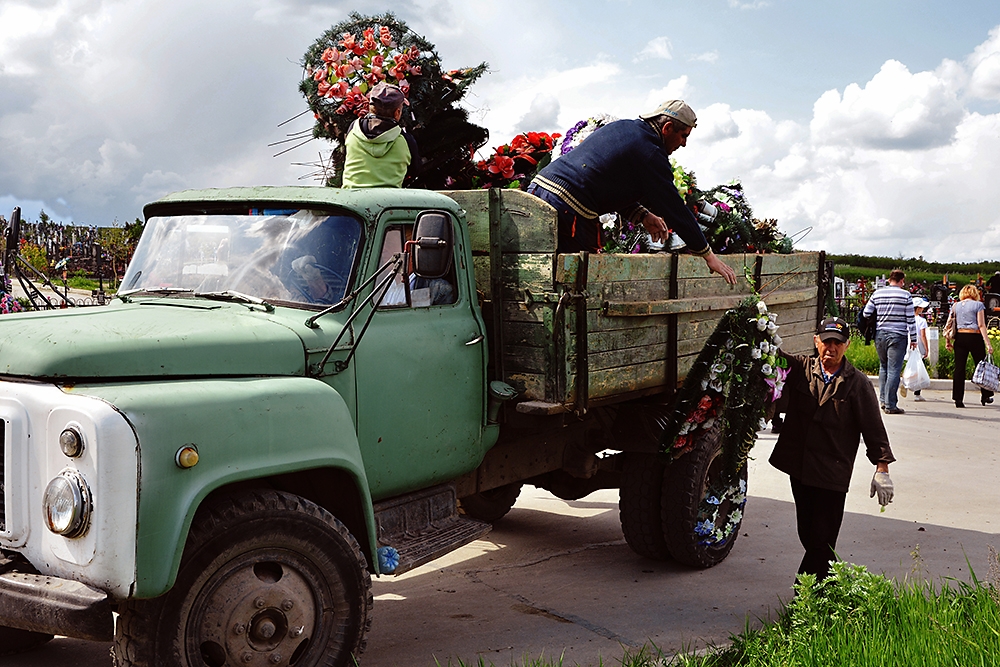 Cemetery workers remove old flower wreaths a day before Easter of the Dead, during which thousands are expected to visit. 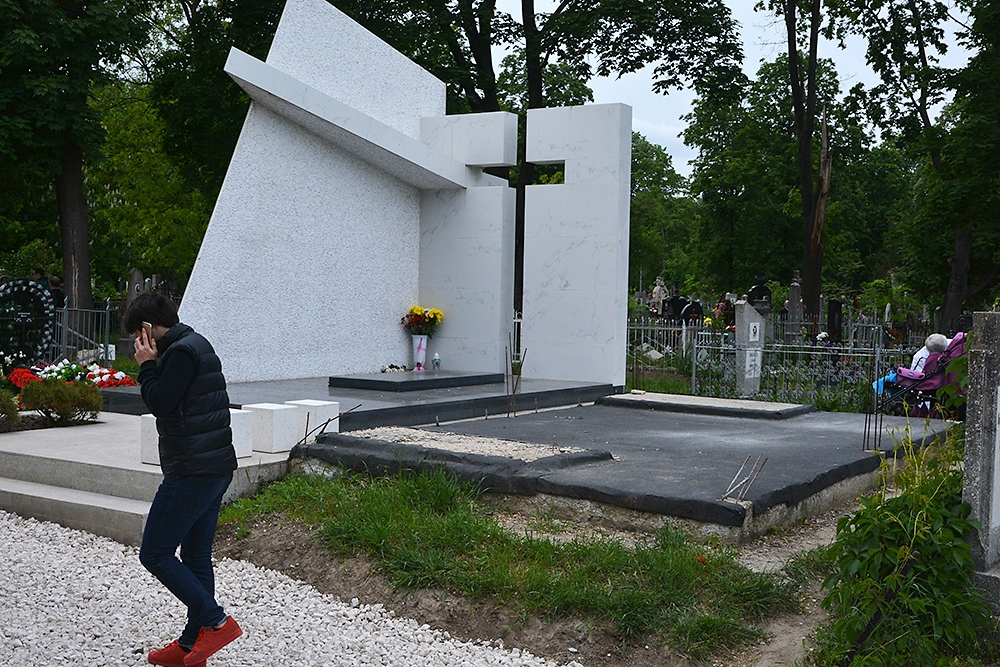 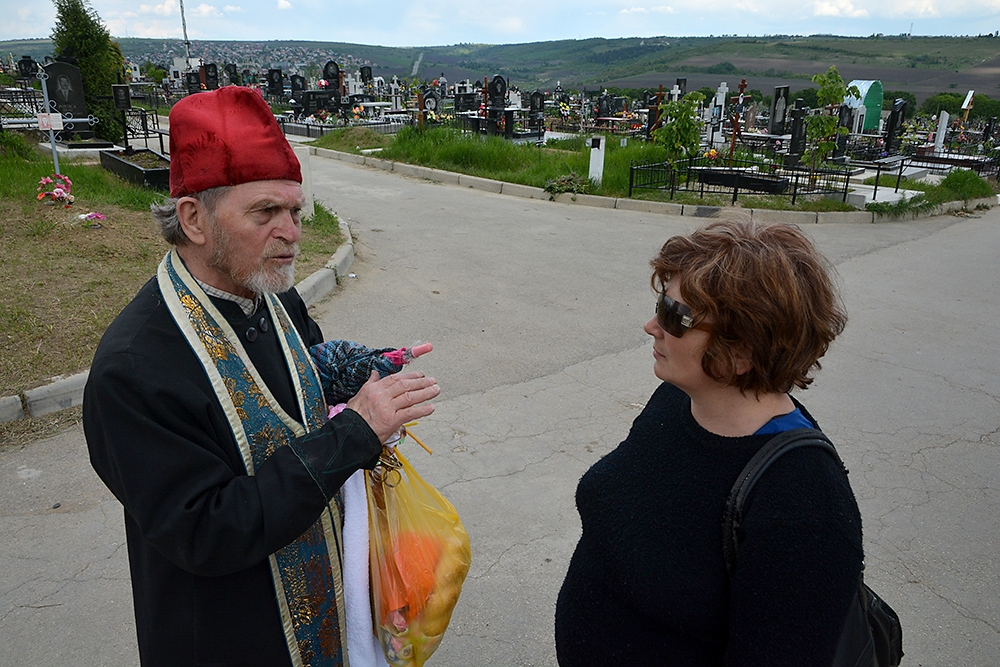 An Orthodox priest talks to a visitor at the cemetery, one of the largest in Europe at more than 207 hectares (164 acres).acr. 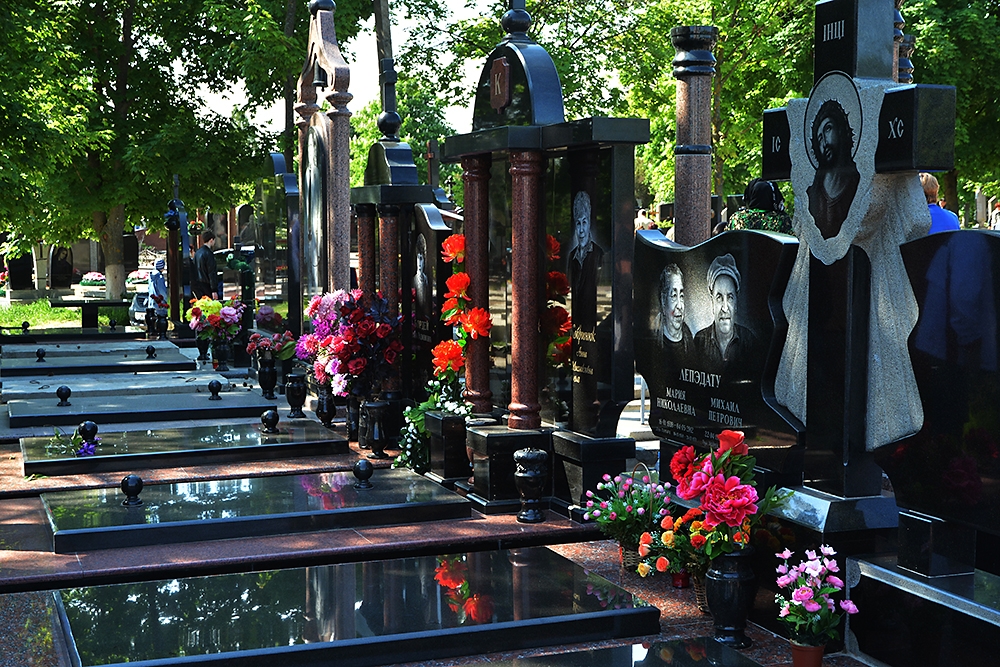 Also known as Doina, Saint Lazarus Cemetery is said to have more than 300,000 graves, including 300 family vaults. 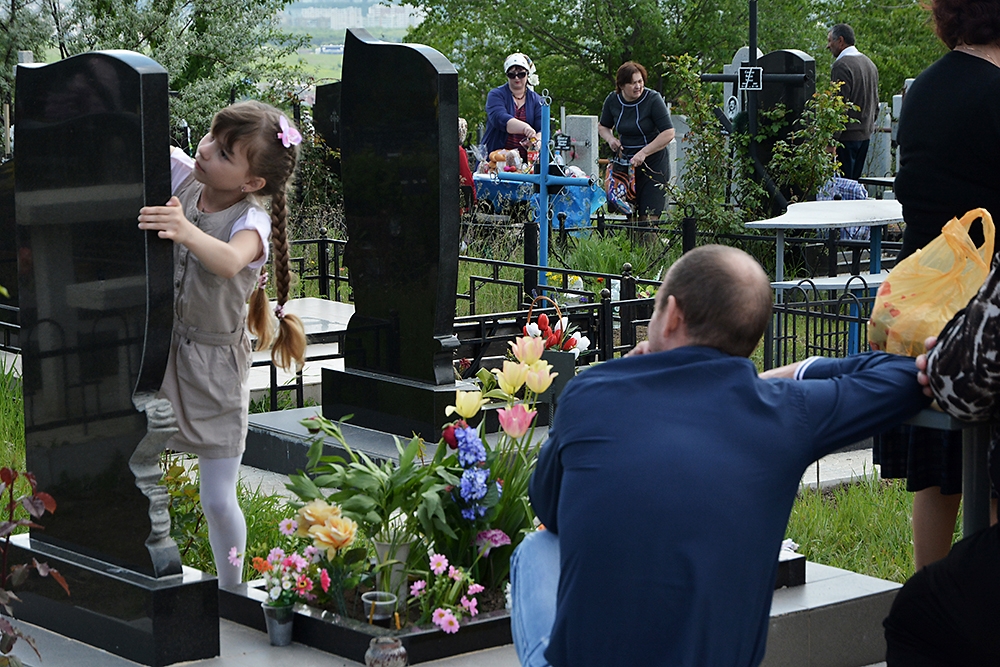 Moldovans recognize Easter of the Dead for two days a week after Orthodox Easter; this year on May 8-9. 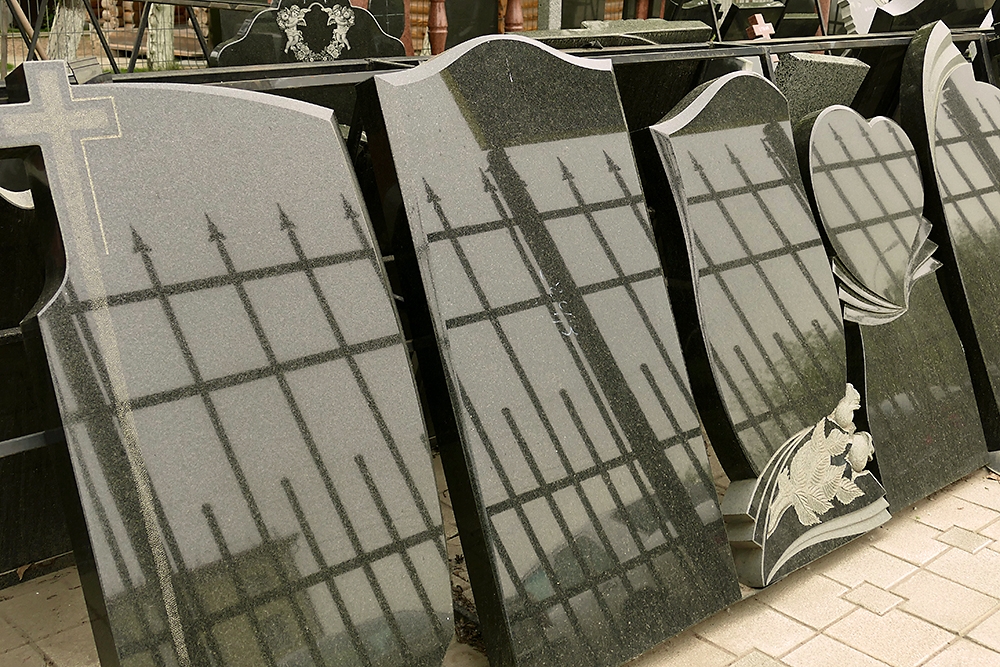 Unfinished headstones are displayed at a gravestone hewing company outside a Chișinău cemetery. 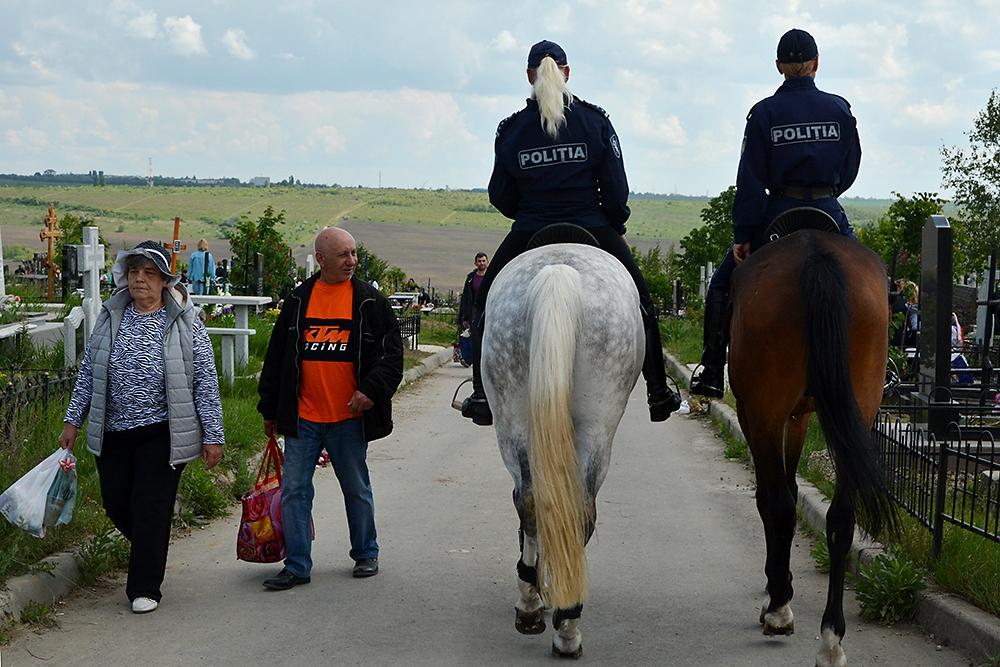 Police on horseback and on foot patrol Saint Lazarus Cemetery during the two-day Easter of the Dead. 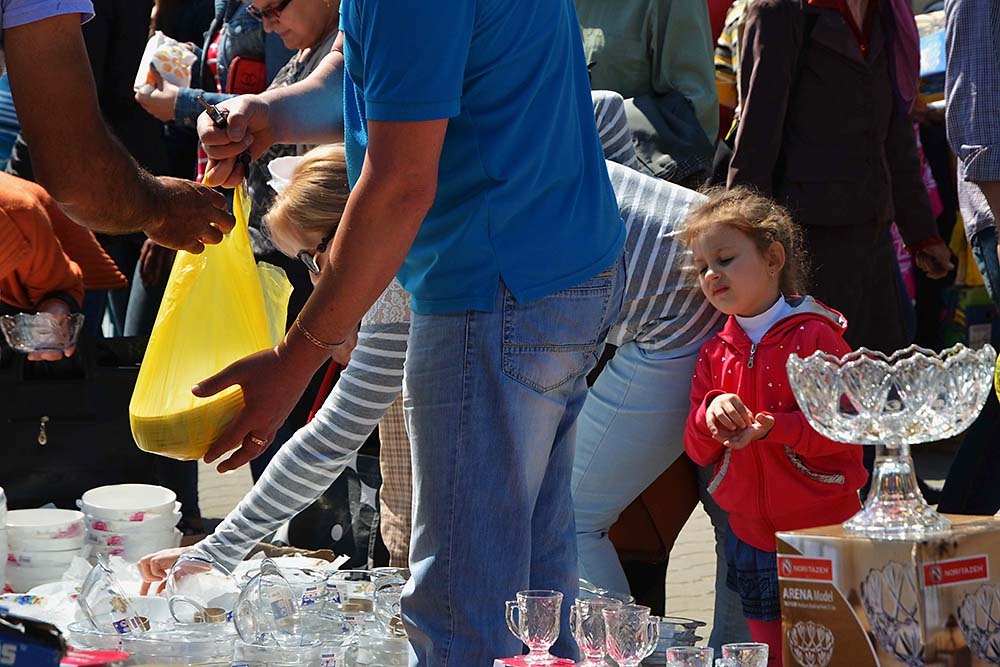 A day before Easter of the Dead family members often buy vases, candles, drinks and food at the main downtown Chișinău market. 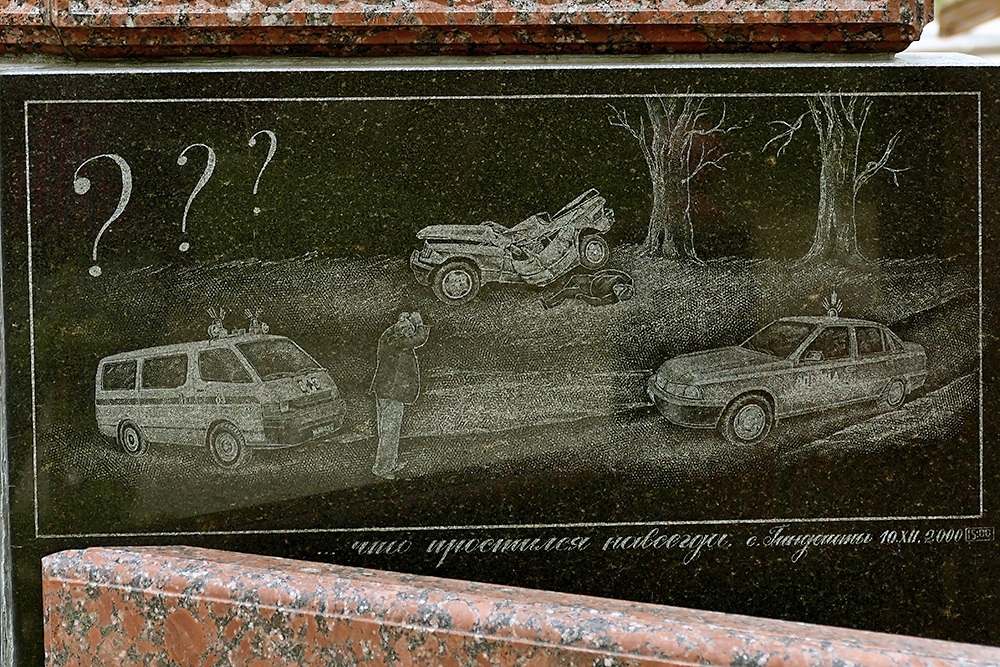 Headstones often have intricately carved scenes and portraits of the deceased, their lives, family members or other symbols. 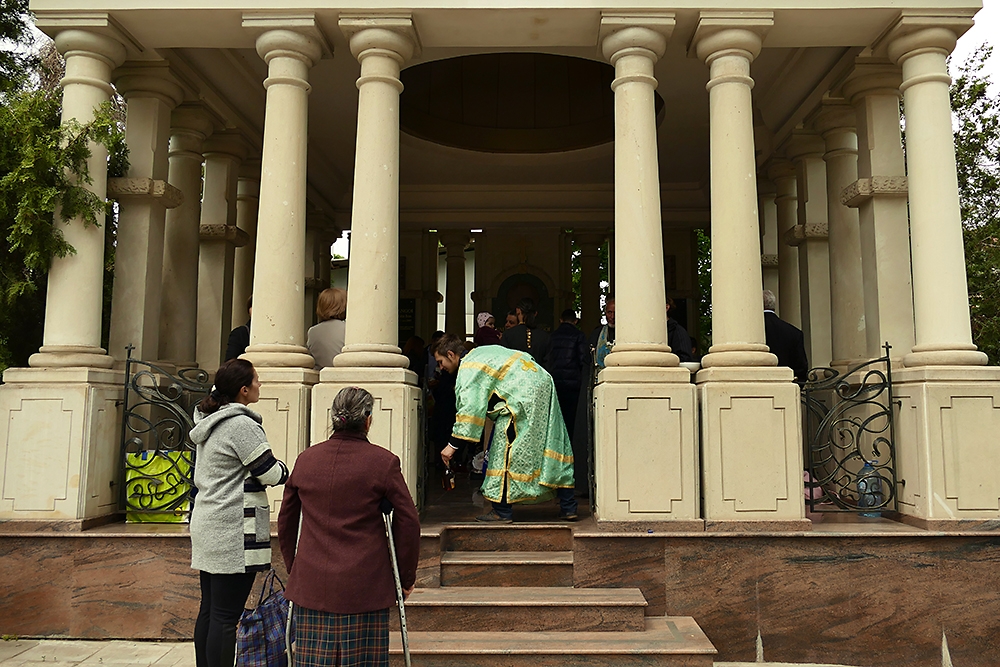 Women at the Central Cemetery beg in front of the family tomb of Vasile Drangoi, known as the Ice Cream King of Moldova. 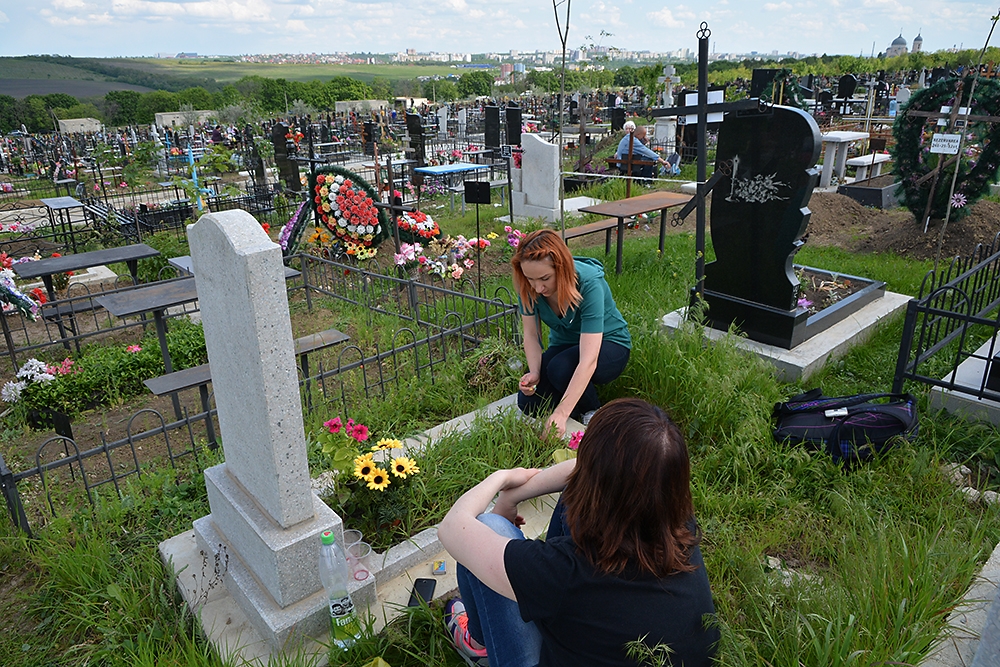 Visitors clean up a grave site at Saint Lazarus Cemetery during Easter of the Dead. 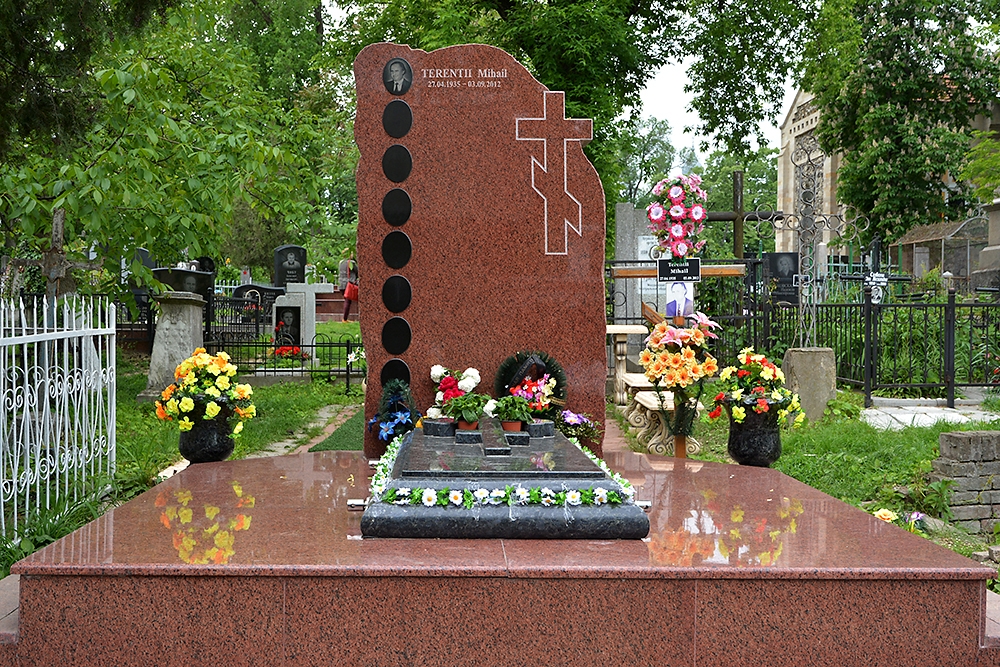 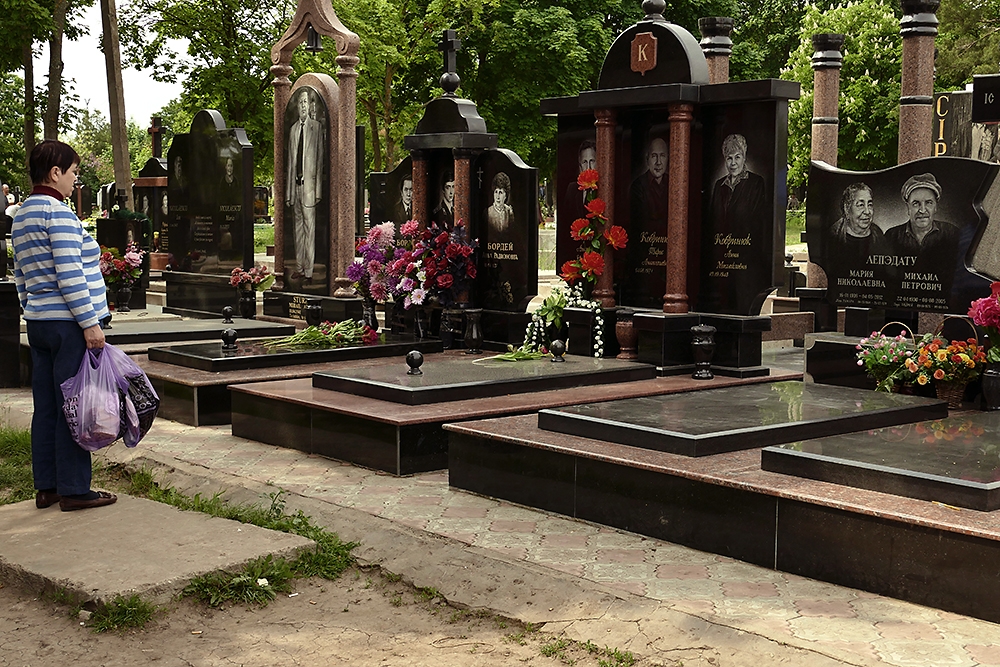 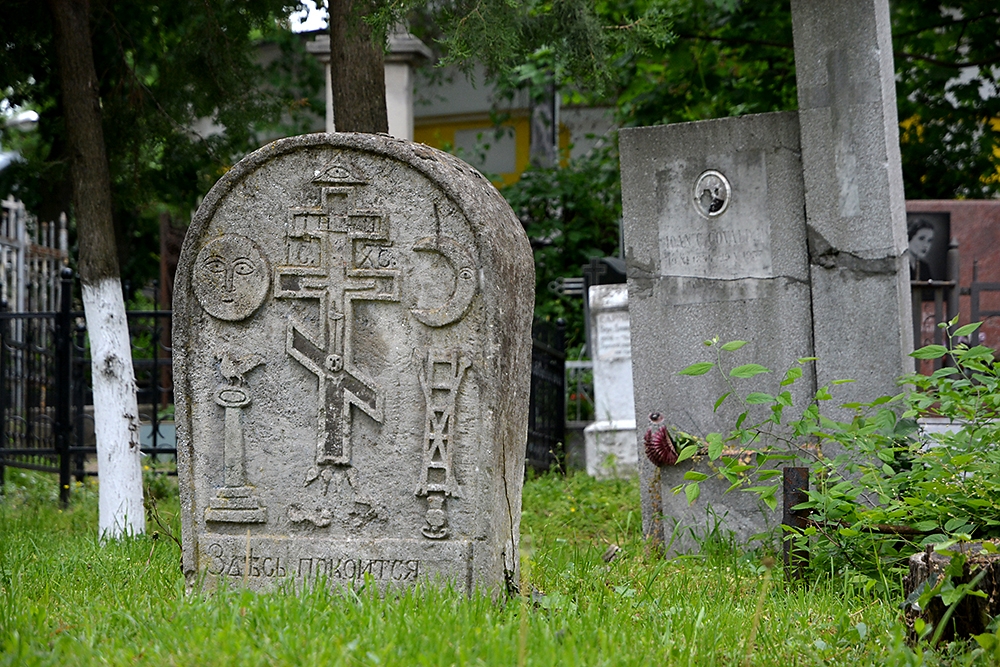 Older and more traditional headstones in Central Cemetery incorporate sacred elements of the sun and moon. 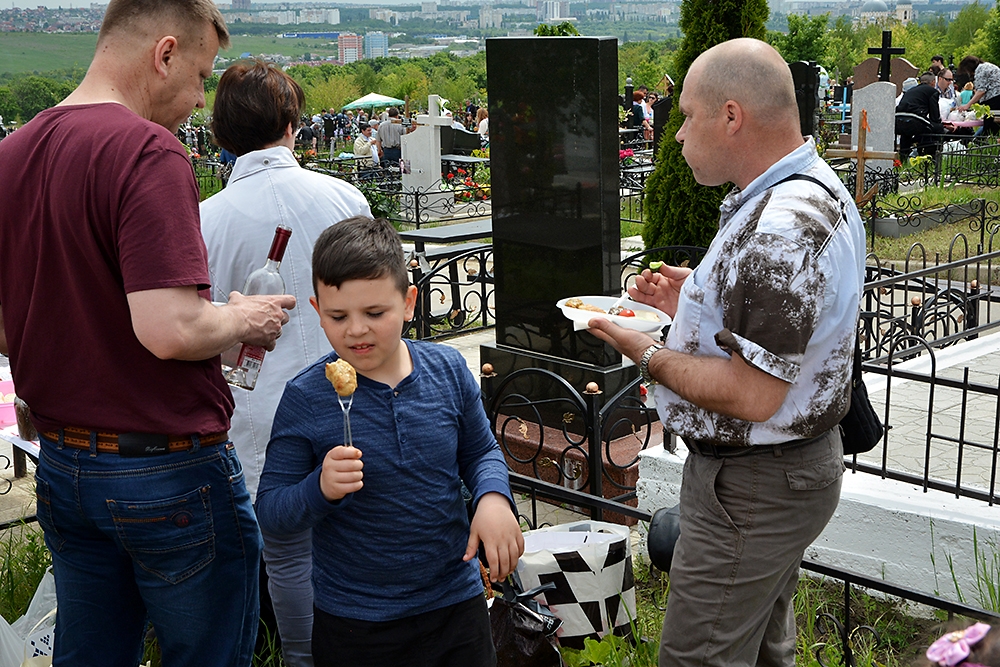 Aside from bringing gifts to a relative's graves, Moldovans also feast and drink alcohol graveside during Easter of the Dead. 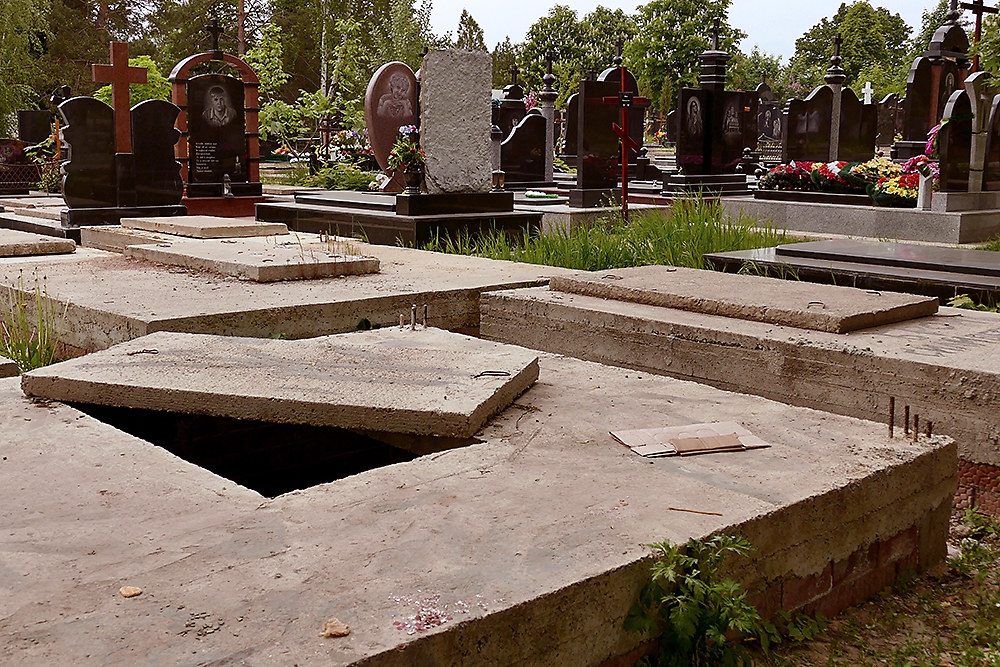 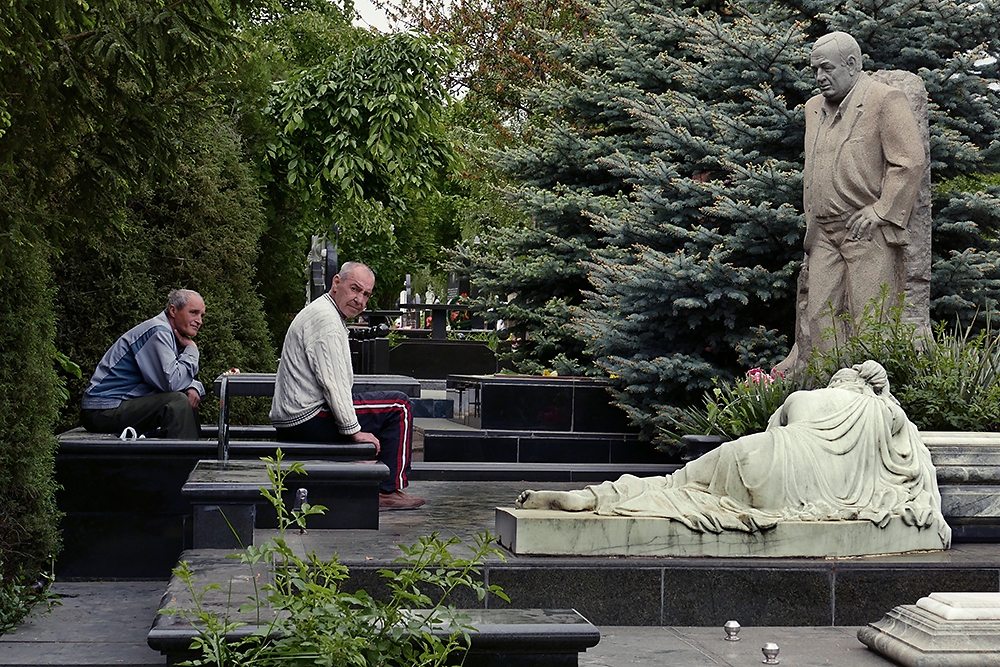 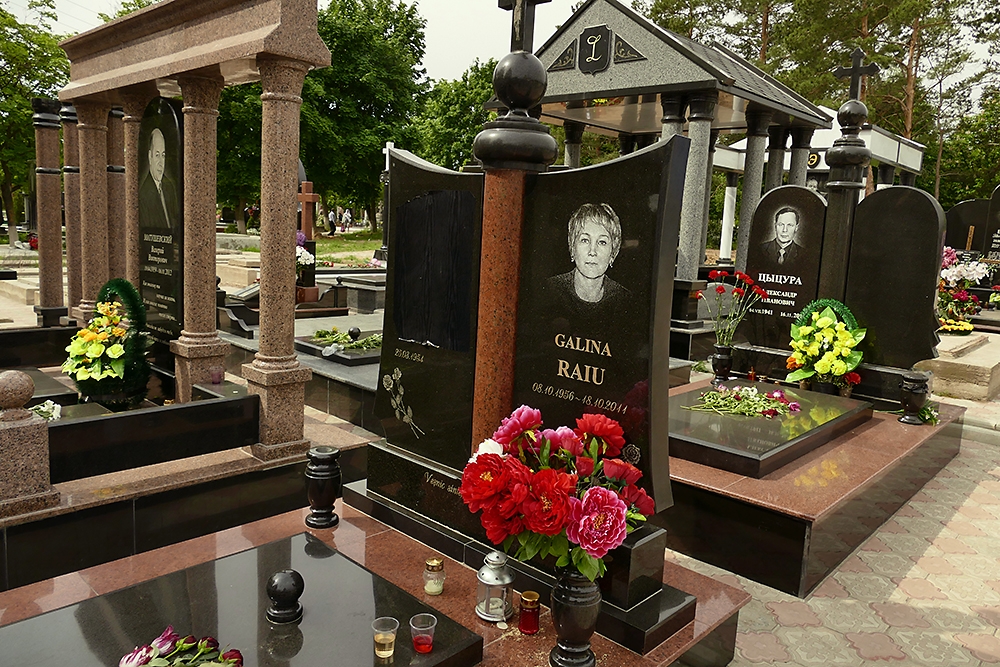 More expensive and prestigious burial plots and tombs often are located near the main gates and churches of cemeteries. 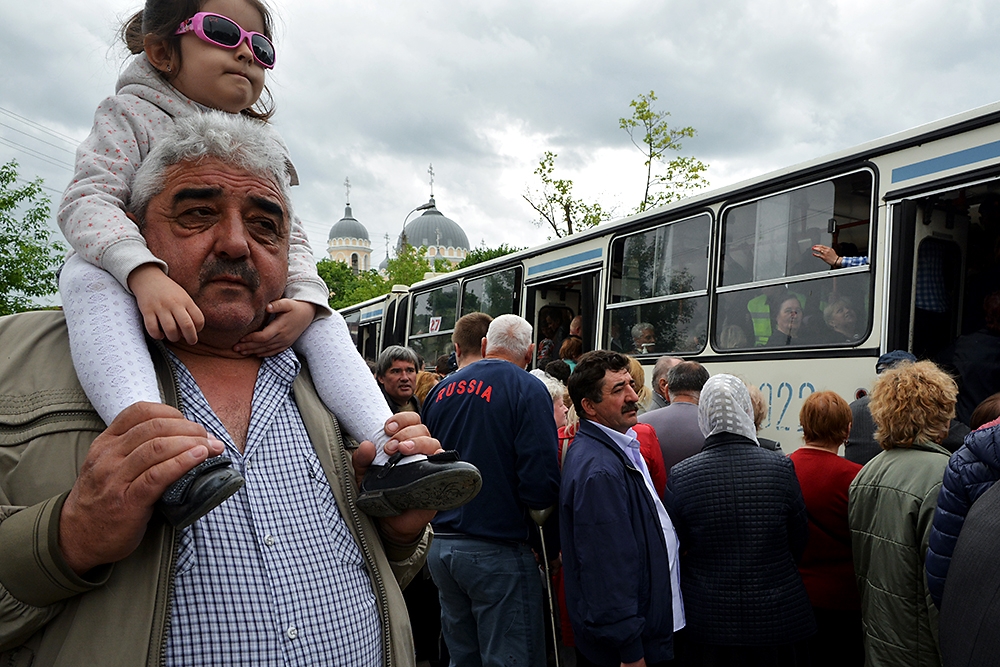 The city government of Chișinău provides about 100 buses to deliver residents from the city center to Saint Lazarus Cemetery.
prev
next

In a corruption-prone country where everything has its price, gaining a space at Moldova’s city-run Saint Lazarus Cemetery, one of Eastern Europe’s largest cemeteries, also can come down to a matter of money, according to firsthand accounts.

With 300,000 graves spread over 107 hectares (264 acres), Saint Lazarus, located in the northeastern part of the Moldovan capital, Chișinău, ranks, without question, as the busiest and most prestigious of the city’s 11 cemeteries. It buries between 4,500 to 5,000 people each year, according to Saint Lazarus Cemetery Director Petre Ene.

Its status becomes particularly apparent on the so-called Easter of the Dead, one week after Easter, when hundreds of Moldovans, often dressed as if attending a wedding, come with gifts and food to place on the graves of friends and family. As in other Orthodox countries, they eat and drink graveside to honor the deceased and ensure he or she rests in peace.

The plots in which they lie, however, have contributed to a problem. Since 1964, when the city-owned cemetery opened, it has expanded by two hectares (about five acres) per year. “At that pace, we will leave only cemeteries to future generations,” Ludmila Boțan, director of the city-run company Funeral Services, which manages Chișinău’s cemeteries, wryly remarked.

But the cemetery maintains that all is in order. Cemetery Director Petre Ene noted that he has not noticed any recent surge in demand for cemetery plots.

At the moment, Saint Lazarus has 1,800 free spaces left; slightly over the required reserve capacity, he said.

Further expansion, however, is tricky. Privately owned agricultural land surrounds the cemetery and must be purchased. The cemetery’s administration last year asked the city government for another 50 hectares (roughly 124 acres) of land, but, so far, has not received an answer.
To increase space, Funeral Services requires that remains be reburied deeper seven years after an initial burial.

Cremation, which Boțan supports as a space-saving measure, is not an option. Though not a state-run body, the Moldovan Orthodox Church, the faith of some 93 percent of Moldovans, forbids the practice, and few Moldovans are inclined to challenge its position.

That forces Moldovans to make do with the land they have. Space in the city’s other ten cemeteries is limited. And the market has responded accordingly.

Chișinău resident Tatiana Vrabie, a 51-year-old accountant, wants to purchase a family tomb with room for six to eight people in a section of Saint Lazarus near the entrance gates; a high-profile section dedicated to national heroes. She said, however, she was told she would need to pay 100,000 leis ($5,130) – about the same as an average Moldovan’s purchasing power for an entire year.

"From what I was told [by the cemetery’s administration], the places here are already purchased, so you can get one just from those who’ve made a deal out of this,” she commented.

Though regulations do not allow the cemetery’s graves or 300 two-to-eight-person tombs, acquired for a set fee of 3,111 leis ($160), to be sold privately, attempts at such sales occur. Would-be sellers signal their interest by placing a piece of paper with their phone number on top of the tomb they own.

Another option for a plot near the cemetery entrance, claimed Chișinău attorney Violeta Gaşiţoi who has represented plaintiffs in cemetery corruption cases, is to pay “the cemetery`s administration . . . a price 80 times higher than the cost for a burial,” or about $4,100.

A Chișinău businessman interested in buying a four-person tomb in Saint Lazarus alleged to EurasiaNet.org that a cemetery official told him that if he would pay him 65,000 leis ($3,340) in cash “he will arrange the necessary documents and I will become the owner of the tomb.”

The businessman, who would speak only on condition of anonymity, did not accept the offer.The named official in question could not be reached for comment.

Boțan, who emphasized that the construction of such tombs occurred before she came to Funeral Services in 2012, underlined that the law does not allow cemetery employees to sell tombs on the side.

Saint Lazarus Director Ene, who has been at his post since 2006, stated that he knew nothing about such sales. Grave-owners must hire private companies to build tombs, he said. Construction costs can range from 33,000 leis ($1,670) on up, he estimated.

“Maybe it’s too expensive for the people,” he commented, adding that “[W]e cannot control that.”

Nor does the city appear inclined to investigate.

Deputy Chișinău Mayor Vlad Coteț said he doesn`t care who builds tombs in Saint Lazarus. "For me, it is important that those who buy a place in the cemetery pay rent for the land. Otherwise, let them build what they want.”

Maintaining the cemetery costs Funeral Services about 11 million lei ($560,000) each year, Boțan said, but Ene declined to say what are the actual maintenance costs.

Against this backdrop, some 25,000 Moldovans, fearing both rising prices and declining space, have gone ahead and “reserved” their own slots, complete with a tombstone that bears their name and date of birth.

"This cemetery is just like real life,” she said.

Arguably, some Chișinău residents might add, in more ways than one.

Nicolae Pojoga is a photojournalist and video journalist based in Chișinău.