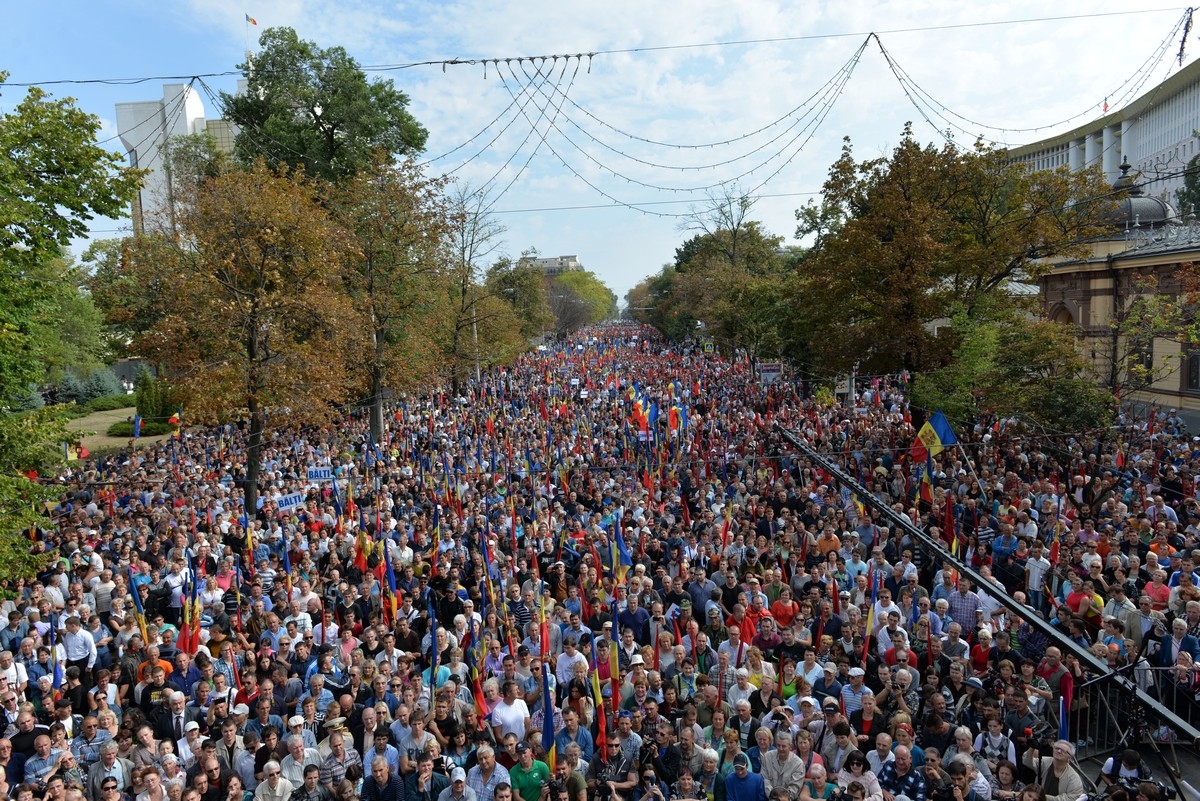 A rally organized in Chișinău in late September by two pro-Russian parties, the populist Our Party and the Socialist Party, drew more than 50 thousand people, according to party representatives. Pro-Kremlin elements in Moldova’s anti-government protests are embracing aggressive tactics as they try to capitalize on public frustration with rampant corruption and disrupt the country’s Western integration efforts. (Photo: Socialist Party of Moldova)

Pro-Kremlin elements in Moldova’s anti-government protests are embracing aggressive tactics as they try to capitalize on public frustration with rampant corruption and disrupt the country’s Western integration efforts.

Two pro-Russian parties — the populist Our Party headed by 36-year-old businessman Renato Usatâi and the Socialist Party run by 40-year-old economist Igor Dodon — are coordinating the protests, which have ranged from dumping human excrement in public areas to blocking parliament. Despite frustration with the traffic jams caused by these groups in the Moldovan capital, Chișinău, their tactics seem to be paying political dividends: a recent opinion poll of 1,108 Moldovans by the CBS-AXA Centre of Sociological Investigations and Marketing showed that if early elections were held, the two pro-Russian parties would each receive nearly a quarter of the vote. In the same poll, no more than 10 percent of participants expressed support for the pro-European parties that comprise Moldova’s government.

“I want to get the oligarchs out of parliament and this will happen one great day,” said 34-year-old Vadim Ciutac, as he drank tea with friends in a cafeteria set up by pro-Russian protesters in Chișinău. “We do not want any closer ties with the European Union. We want to be with Russia.”

With one of Europe’s weakest economies, Moldova has yet to see tangible economic benefits from its 2014 association agreement with the EU. At the same time, the country has been rocked by two mega-money-laundering scandals that have implicated officials and judges alike and involved billions of dollars.

Prosecutors are widely perceived as being slow to address the money laundering issue, a perception that has played a key role in fanning protests, now in their fifth week. On October 15, though, prosecutors arrested Vlad Filat, a former prime minister and the head of the pro-EU Liberal Democratic Party, a government coalition member, for alleged involvement in the laundering of $1 billion in funds from Russia.

The arrest marks a significant setback for the government’s pro-Western coalition. While some pro-Russian protesters sang and danced with delight in front of parliament, others remained stationed at parliament’s doors to “ensure that Vlad Filat will not run away.” Filat himself denies any wrongdoing.

Though these demonstrators are not alone in criticizing Filat, political analyst Dionis Cenușă from the non-profit think-tank Expert-Group sees a connection between the pro-Russian groups’ actions and Moscow’s interests.

Russia, targeted by EU sanctions for its aggressive actions in Ukraine, has not disguised its desire to push back against the pro-EU choices of governments in Moldova, Ukraine and Georgia. In Dodon, already courted by Russian President Vladimir Putin, and Usatâi, the owner of a business that supplies Russia’s state-run railways, it finds two willing partners, many Moldovans believe.

He fled to Russia, but for unclear reasons, was allowed to return this May. He now serves as mayor of the town of Bălți, 127 kilometers north of Chișinău.

Although their interests appear to converge, Cenușă cautioned there is no proof that the Russian government is providing financing to Usatâi's or Dodon’s parties.

Plenty of money, however, is being spent on the protests. A decorated cafeteria serves food round-the-clock to the two men’s supporters, while new tents stationed outside parliament for protesters come with comfortable mattresses. Cars bearing Usatâi’s personal license plates deliver blankets, food and water. Private buses transport rural protesters; Usatâi himself has offered to pay for hotel rooms for women.

Both Dodon and Usatâi have denied a claim by one former Liberal Democrat parliamentarian, Petru Vlah, that they are paying protesters 150 leis ($7.50) per night to take part in the demonstrations.

For some observers, though, more telling are other actions taken by Usatâi. An American PR consultant for Filat, Molly McKew, left the country earlier this month after the businessman publicized her passport information and accused Filat of using taxpayer funds to pay for McKew’s services.

McKew, who also has worked for former Georgian President Mikheil Saakashvili’s ardently pro-Western government and party, the United National Movement, believes that “The goal of this smear campaign and actions has everything to do with discrediting the idea of ​​European integration and the West.”

How Usatâi obtained McKew’s passport information remains unclear. The government has not commented or launched an investigation. It also has not prosecuted the entrepreneur’s supporters for blocking traffic in downtown Chișinău.

McKew believes that Usatâi does not act alone. “Russia is working to ensure Moldova has no option, but an immediate future of Kremlin control,” she alleged.

Usatâi could not be reached for comment. The Russian Embassy has not publically commented about the protests.

What effect, if any, Filat’s arrest will have on public support for pro-Russian protesters is difficult to determine at this time. The groups are outnumbered by demonstrators from the apolitical Dignity and Truth Platform, an activist movement that also has targeted government corruption. So far, aside from one October 4 event in the Russia-friendly region of Gagauzia, the pro-Russia protests do not appear to be spreading beyond the capital.

Through a copy-editing mistake, this story originally named the American PR consultant as Molly McFee. Her actual name is Molly McKew. The story has been corrected.