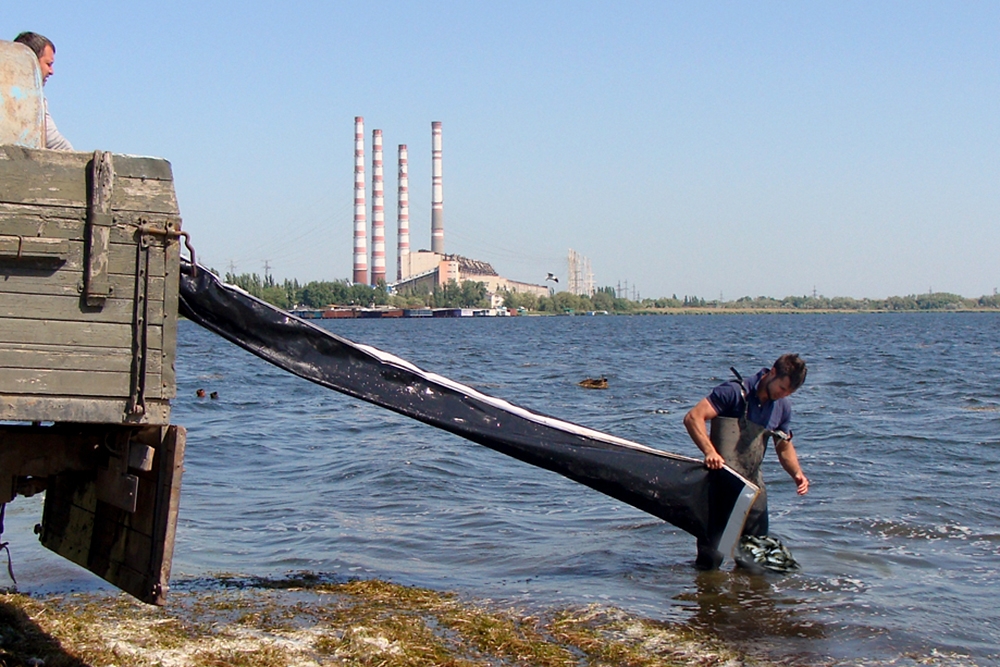 Fingerling fish are released in 2015 into the Cuciurgan estuary in a program of restocking native fish species in rivers and lakes near the Cuciurgan hydropower station in breakaway Transnistria. Moldova gets some 75-80 percent of its electricity from the power station. (Photo: MoldGRES)

The anti-government protests in Moldova are not just about political power; they are also driven in part by a desire for greater transparency.

One source of protesters’ ire is electricity or, specifically, the tangled system under which electrical power is generated and distributed in the country. It is one thing that power prices have increased by about 37 percent since last November, Moldovans grumble. But it is quite another when no one — not even government officials — can state who actually owns the company that provides most of the power for this country of 3.6 million.

Moldova gets up to 80 percent of its electricity from a hydropower station, Cuciurgan, located in breakaway Transnistria, a region controlled by pro-Russian separatists.

For the past 11 years, the Kremlin-linked Russian energy company Inter RAO has run the hydropower station through its subsidiary, MoldGRES (the Russian acronym for Moldovan HydroElectric Station). But in late 2014, a peculiar change occurred. Moldova’s state-run power company Energocom began receiving Cuciurgan’s electricity via an intermediary, a heretofore unknown entity called EnergoKapital, headquartered in Transnistria.

Economist Sergiu Tofilat, an expert at the non-governmental Institute for European Policies and Reforms in Chișinău, estimates that EnergoKapital earns between $150 million and $160 million annually from its activities as Moldova’s power middleman. The tariff for EnergoKapital’s electricity, sold to consumers at 2.16 lei ($0.10) per kilowatt, is not regulated.

Nor, apparently, is its ownership registered.

Although required by law to record shareholder information, Moldova’s State Registration Chamber, an agency operating under the Ministry of Justice, does not have such details for EnergoKapital on file. The company’s address is registered in Transnistria’s capital, Tiraspol. Unlike other post-Soviet states that have unresolved separatist conflicts, Moldova continues to register businesses in breakaway Transnistria.

EnergoKapital’s contract with the state-run Energocom was concluded roughly a month and a half after it was registered as a company, the government claims. Economy Ministry spokesperson Nicoleta Pădureț said the ministry, which oversees energy policy, played no role in the negotiations.

In response to EurasiaNet.org’s request for information about EnergoKapital, Moldova’s Intelligence and Security Service emailed that “the matter is currently under investigation by the state authorities.” It declined to discuss the company further.

Last October, Moldova’s national energy regulators, ANRE, extended the deal with EnergoKapital for six months. The reasons for the arrangement have not been clearly stated.

One former director of Moldova’s Energy Regulatory Commission, Victor Parlicov, believes that “EnergoKapital could not occur without the consent of MoldGRES, and [it] could not accept the scheme without the final approval from shareholders of [Russia’s] Inter RAO,” which owns MoldGRES. Parlicov is now an expert at the non-governmental Viitorul Institute for Development and Social Initiatives.

“We have to understand that the armed conflict from 1992 [over Transnistria] hasn’t stopped yet, and that is because ‘smart’ guys from both sides of the Dniester [River, which separates Transnistria from Moldovan-controlled territory] have realized that having a territory with an undefined legal status can be a very efficient tool for carrying out various schemes,” added political analyst Oazu Nantoi.

At an October 2015 news conference, Deputy Economy Minister Valeriu Triboi alleged that de-facto separatist authorities in Transnistria had imposed EnergoKapital on the Moldovan government after Ukraine, which supplied roughly half of Moldova’s energy, cut supplies in late 2014. The price offered, he claimed, was “lower than for electricity purchased directly from Cuciurgan.”

Citing no sources, an article on a Transnistria-based discussion forum, openpmr.info, offered registration information for EnergoKapital’s supposed shareholders. The shareholder information could not be entirely verified. Others have speculated that the company could have strong ties to a Moldovan oligarch.

EnergoKapital is not the first entity used by the Moldovan government to obtain electricity from Transnistria’s Cuciurgan hydropower station. Since the country gained independence in 1991, several go-between firms whose owners “are unknown persons who hide in tax heavens,” have funneled power into Moldova from Transnistria, Romania and Ukraine, the economic-analysis website Mold-Street.com detailed recently.

A tradition of shadowy deals between the government and businesses allegedly linked to various officials long has persisted in Moldova, which saw $1 billion in taxpayer funds vanish through an elaborate money-laundering scheme last year. Moldova ranked 103rd out of 168 countries surveyed in the 2015 Corruption Perceptions Index produced by anti-corruption watchdog Transparency International.

Anger at such practices has helped fuel protesters’ demands for fresh elections. The government refuses to resign, but parliament, which opened its spring session February 1, is expected to vote on a measure to hold a referendum on the direct election of the president. Currently, the chief executive is selected by legislators.