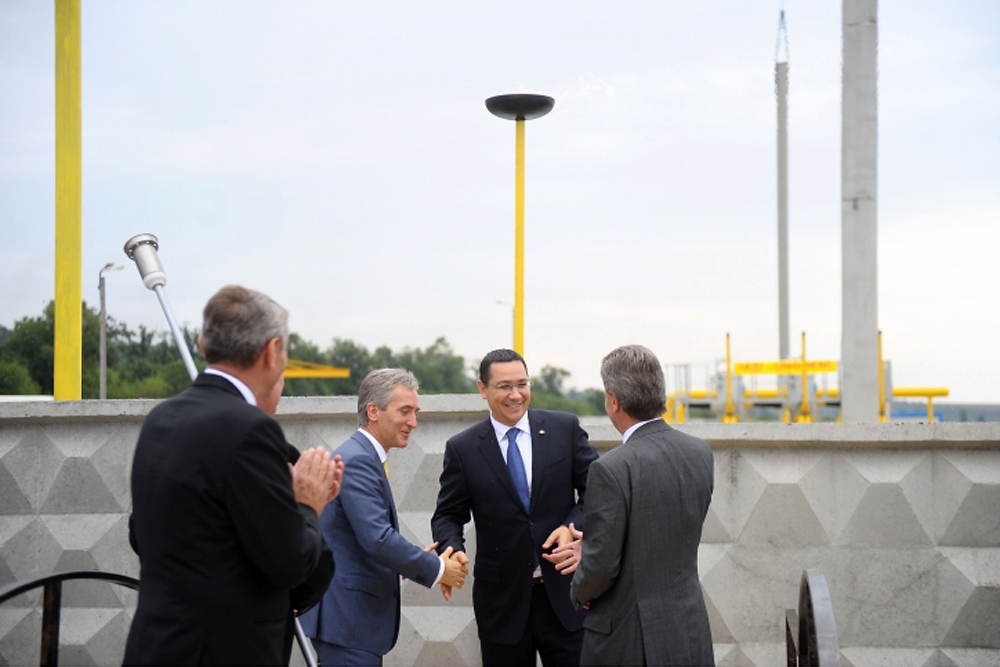 While the cease-fire between Ukraine and pro-Russian and Russian fighters holds steady, another fight is poised to begin over Russian gas for Ukraine. And, this time, it’s a fight that, by default, involves Ukraine’s small, pro-Western neighbor, Moldova, too.

Currently, Moldova, the recent signatory of a European Union Association Agreement, relies entirely on natural gas from Russia, delivered via Ukraine. Moldovagaz, a company half-owned by the Russian energy giant Gazprom and 35.3 percent by the Moldovan government, controls distribution of that gas.

In late August, with the inauguration of a 43-kilometer-long pipeline from neighboring Romania, Moldova took a first step toward breaking with this Soviet-era dependence on Russian gas.  But multiple obstacles suggest the break could be long in coming.

Stretching from the Romanian city of Iasi to the northwestern Moldovan town of Ungheni, the 26-million-euro ($33.4 million) pipeline ultimately will be able to supply 1.5 -2 billion cubic meters of gas, an amount that surpasses the 1.1 bcm Moldova now imports from Russia.

It will start, though, with a much smaller amount, that will cover just eight to nine percent of Moldova’s annual needs.

Yet even getting access to these supplies is proving problematic. A start date of September 1 has been pushed back to an undefined time in October. Аnd no price has been set for Moldovagaz to buy and distribute the Romanian gas once it gets to Ungheni.

Construction of the pipeline began roughly a year ago, before the Ukrainian crisis. The government previously had not expressed concern about diversifying its gas-distribution network away from Gazprom.

Now, despite European Union plans to push Russia to agree on an interim gas deal with Ukraine this week, Moldova finds itself caught in a potential bind.

"We have a very specific situation, where the gas distributor in Moldova is the representative of Gazprom,” Moldovan Prime Minister Iurie Leancă
said at the August-27 pipeline-inauguration ceremony. “This means that we need to find a formula with Moldovagaz in order to purchase Romanian gas . . .”

Discussions between Romania’s Romgaz, which will oversee delivery of the gas from Romania, the Moldovan government and Moldovagaz are currently underway, but without clear hints of a breakthrough.

Moldovagaz claims it is “just waiting” for the gas from Romania so that it can “distribute it to consumers.”

"All the required work has been done,” Moldovagaz Vice-President Iacov Cazacu told the economic-news site Mold-Street.com.

Romgaz, in a September 18-statement, said that it “is open to collaboration” and “looking for a resolution” of the situation.

But analysts are not necessarily optimistic.

"For me, it would not be a surprise if Romanian gas will not get to Moldova even till the end of the year,” commented Ion Muntean an energy-security expert at the Institute for Development and Social Initiatives, a non-profit research facility, in the Moldovan capital, Chișinău.  “There are major interests to block the project.”

Ironically, one possible “resolution” might lie with the very country away from whose gas the Moldovan government has said it wants to diversify.
Moldovan Economy Minister Andrian Candu told ITAR-TASS on September 10 that “Moscow and Bucharest can make arrangements for the delivery of Russian gas through Romania” if Ukraine loses its supplies.

The project to connect Moldova to Romanian gas, he added, is not directed against Gazprom, “but is designed to diversify energy supplies to Moldova.”
Candu is expected to discuss the details during meetings with Gazprom representatives in Moscow on September 24-25.

Energy analysts like Otilia Nutu, at the Bucharest think-tank Expert Forum, argue that the Romanian pipeline could end Russia’s “blackmail” of Moldova via gas prices, which now stand at an average of 6,100 lei ($ 420) per thousand cubic meters. But, arguably, that calculation could change if Moldova receives Russian gas, held in storage, from Romania.

The Moldovan government, though, has taken some steps to diversify its distribution system away from Gazprom-influence. The state-run Vestmoldtransgaz will oversee the 11-kilometer-long Moldovan part of the Iasi-Ungheni pipeline.

The company, however, does not yet have an operator’s license, for reasons that Vestmoldtransgaz Director Iurie Dolghier declined to discuss with EurasiaNet.org.

Other variables could also come into play. The EU recently announced that it will allocate an additional 10 million euros (about $12.85 million) to expand the Iasi-Ungheni pipeline all the way to Chişinău. According to the government, construction can begin in mid-2015.

Azerbaijan, eager to get its own gas to new markets, also recently declared again an interest in joint energy projects with Moldova.

But even within Ungheni, a town of about 35,000 people, access to gas from Romania is no closer. Prices for the gas have not yet been discussed with UngheniGaz, a distribution network run by Moldovagaz, nor with the state-run EnergoCom, which manages local consumers’ contracts, underlined Victor Parlicov, a former director of the National Energy Regulatory Agency of Moldova.

But, for now, even with an upcoming parliamentary election in November, when temperatures in Celsius can drop into the single digits (low 40s Fahrenheit), the Moldovan government does not appear overly concerned.

"A delay of one month really does not change the general picture. Moldovagaz or Unghenigaz must buy Romanian gas,” Prime Minister Leancă declared on September 17.