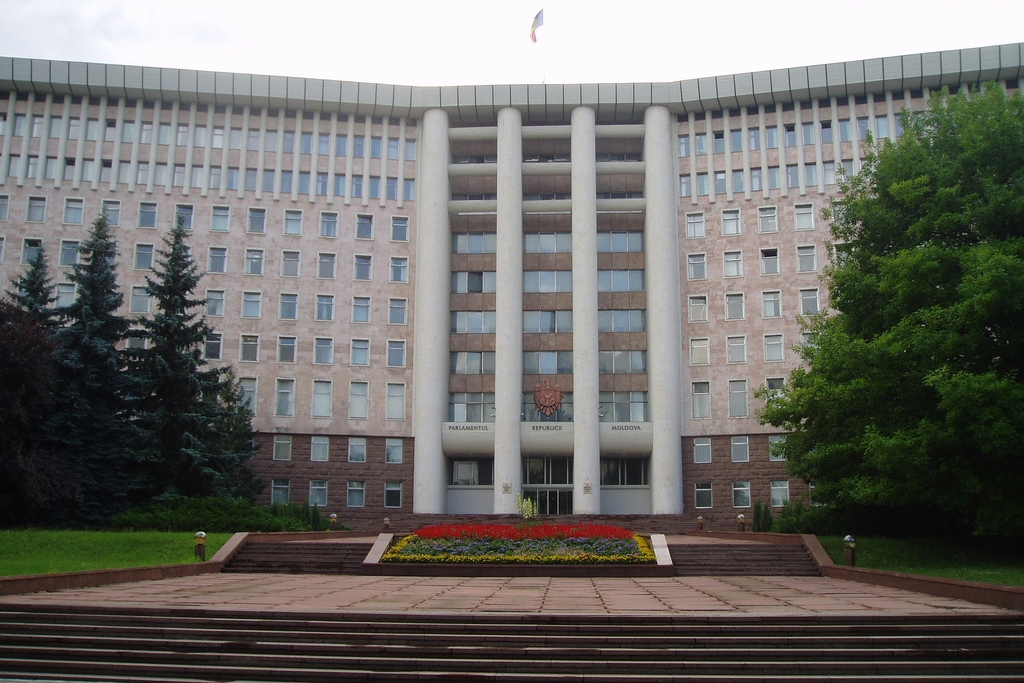 The building of Moldova’s parliament. Legislators may soon vote on proposed changes to Moldova’s broadcast regulations that, according to critics, would have far-reaching consequences for domestic press freedom. (Photo: Guttorm Flatabø)

Proposed changes to Moldova’s broadcast regulations are creating a free-speech conundrum. The amendments are primarily meant to counter propaganda from Kremlin-friendly Russian broadcast outlets, but they also could end up placing curbs on journalists’ ability to cover the Moldovan government.

A vote in parliament on the measures, proposed earlier this month by the governing pro-Western Liberal Democratic Party and Democratic Party of Moldova, has been postponed. If adopted, critics say the measures would have far-reaching consequences for domestic press freedom.

Under the proposed changes, Moldova would no longer be able to disseminate news or news-related programs from countries that have not ratified the 2002 European Convention on Transfrontier Television, a set of international standards for rebroadcasts.

Russia, which provides about half of the programming on Moldovan cable networks – outlets that reach an estimated 19 percent of the country's more than 1.13 million households – is not a signatory to that pact. Moscow has denounced the possible ban as “discrimination” that could have unspecified consequences for relations between the two countries.

The proposed restrictions, though, come as no surprise. In 2014, Moldova banned transmissions of the Kremlin-controlled Rossiya24, and recently prevented several journalists from Kremlin-linked broadcasters from entering the country.

Under articles six and seven of the proposed amendments to the Audiovisual Code, regulators could block the broadcast of stories about government-run bodies or about officials when no attempt was made to contact them for comment. Accusations about “administrative offenses” or any other “incriminating information” that has not yet been proven also would be banned.

In addition, journalists would be prohibited from citing unnamed sources – often called “reliable sources” in Moldovan media – even in the case of sensitive investigations. Reporters also would be required “to specify explicitly” that a government body refused to comment.

Fines for violating these rules would be increased to up to 20,000 lei ($1,110) and broadcast regulators would be able to switch off immediately broadcasts seen as infringing on Moldova’s independence or territorial integrity.

Some Moldovan civil society members believe such measures are excessive.

“When it comes to the issue of how a moderator should react [to allegations of official wrongdoing] during a talk show/TV program, it should not be a question of regulation, but self-regulation,” argued Nadine Gogu, director of the Center for Independent Journalism, a non-governmental media-development-assistance organization in Chișinău.

“There is an ethics code, there is a guide on ethical norms that comes with recommendations for journalists on how to respond when accusations of corruption are raised during TV shows,” Gogu continued. “We should not get into the situation where moderators have to follow the Audiovisual Code.”

Already, the existing ban on Rossiya24 shows that "the proposed changes do not bring anything new,” noted Petru Macovei, executive director of Chișinău’s Independent Press Association, a booster organization for non-politically-aligned media.

“If you move the mask to one side, you will discover a large and sophisticated trap,” Radu alleged. “Once parliament approves it, this trap can crush the free press in one day.”

The amendments could pose a particular risk for investigative reporting, including an ongoing journalistic probe into an alleged $20-billion Russian money-laundering scheme involving Moldovan judges.

Alarmed at the potential impact of these changes, 30 media organizations and non-governmental organizations requested that parliament postpone further votes on the draft regulations.

One of the amendments’ sponsors, Democratic Party of Moldova parliamentarian Sergiu Sârbu, has stated that everything is open to negotiation. “There will be a public consultation, and the provisions criticized by civil society and the media could be excluded from the bill, so that only provisions concerning the conditions for retransmission of foreign broadcasters remain," Sârbu told EurasiaNet.org.

No date has been announced yet for parliament’s next debate on the amendments.

So far, international institutions appear divided in their response to the proposed broadcast regulations. The European Union, which will host a May 22 summit in Riga on partnership with Moldova, as well other Eastern European countries, has not yet commented officially on the measures.

In April 9 comments to EurasiaNet.org, Andi Cristea, the Romanian chair of the European Parliament’s delegation to the EU-Moldova Parliamentary Cooperation Committee, was generally supportive of the pushback against Russian propaganda, but conceded that restrictions on “the dissemination of information from unofficial sources … may impair the independence of the press.”

The Organization for Security and Cooperation in Europe has spoken out more forcefully. In an April 22 statement, OSCE Representative on Freedom of the Media Dunja Mijatović charged that, while Moldova’s worries about the security threats posed by Russian media are “legitimate,” the proposed measures “may be abused and result in media self-censoring its work.”

“Propaganda should be countered with information, rather than content restrictions,” she commented.

Less controversial restrictions also have been proposed. Paid advertising would not be allowed for public television apart from public-service and election-campaign ads. Politicians and officials would not be permitted to host political talk shows – an apparent attempt to restrict widespread political influence on Moldovan television.