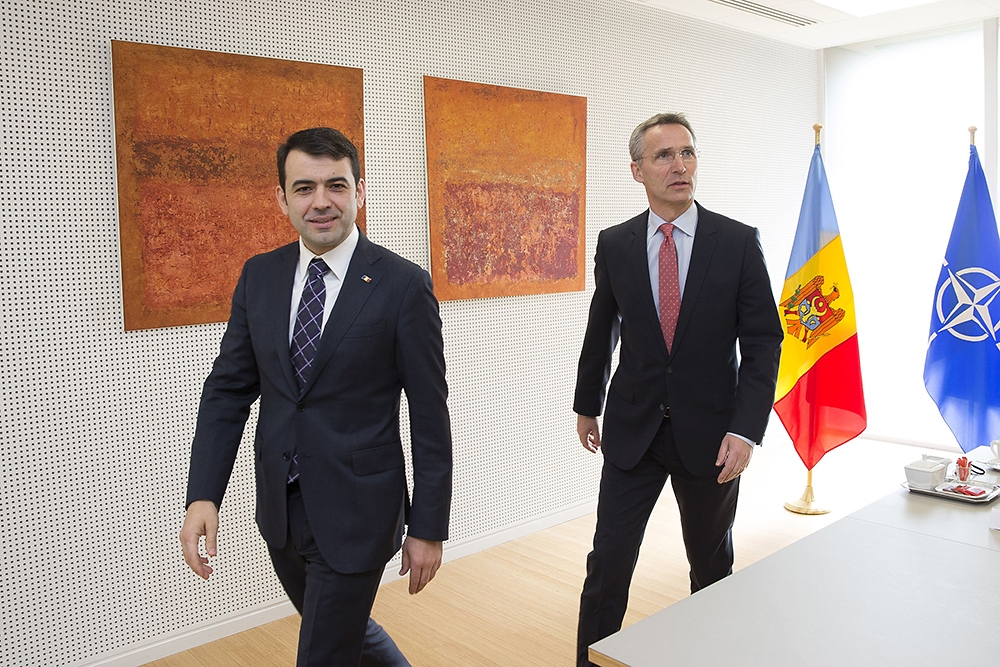 The United States is stepping up military cooperation with Moldova as part of a broader effort to push back against Russian aggression in Ukraine. But local enthusiasm for integration with the US-led North Atlantic Treaty Organization is plummeting.

Widespread public disillusionment with Moldova’s pro-Western government, fueled by officials’ inability to contain rampant corruption, is a major cause for the lost faith in NATO’s security umbrella. Anti-corruption protests now have the government in Chișinău on the defensive.

A survey run by the Washington, DC-based International Republican Institute found that the number of pro-NATO Moldovans dropped from 31 percent of 1,500 respondents in September, 2014, to 19 percent in October last year, one month after anti-corruption protests began. The corruption issue has also dented public approval for Moldova’s efforts to join the European Union.

Support for the Atlantic alliance has continued to decline. In a survey in November last year, the bi-annual Barometer of Public Opinion, only 16 percent of 1,160 respondents stated that NATO membership “would be the best solution for ensuring the security of our country.” Neutrality was preferred by 50 percent of respondents.

Octavian Țâcu, professor of history and international relations at the Free University of Moldova, attributes “this significant decrease” in support for NATO membership to "political instability and the crisis in the country.” Cut adrift by international lenders, the Moldovan government is focused merely on surviving the corruption scandals and protesters’ demands for change. Officials no longer have much time or the political will to “intensively” pursue ties with NATO, some observers say.

Public attitudes are also being influenced by Russian media, which broadcasts programming that casts NATO in a derogatory light, claimed Elena Mârzac, director of the NATO Information Centre in Chișinău.

Against the backdrop of flagging support for Western integration, the United States has included Moldova in a $63-million regional program for 2016 to build “more formidable defense capabilities . . . against aggressive actions by Russia or from other sources.” Areas targeted include “border security and air/maritime domain awareness, as well as building stronger institutional oversight” of defense ministries, according to the Pentagon.

As part of the regional program, a 13-day-long military exercise involving 130 Moldovan and American troops began on March 6 near the Moldovan city of Balti, about 61 kilometers (38 miles) southeast of the Ukrainian border.

A contingent of 18 unidentified senior American military officers also visited Moldova in February to discuss defense reform and possible contributions by the United States, the Organization for Security and Cooperation in Europe, the European Union and NATO. Meanwhile, during a February 8 visit to Brussels, Foreign Minister Andrei Galbur met with NATO Deputy Secretary-General Alexander Vershbow.

The US Embassy did not respond to a EurasiaNet.org request for more details about bilateral military cooperation.

Some young Moldovans, such as Constantine, a 23-year-old medical student in Chișinău, are wary of US security assistance. “Wherever the Americans have turned up with guns, they have left thousands of dead and wounded in different countries, on different continents,” said Constantine, who declined to give his last name. “Is this the NATO that Moldova would like to join?"

In an interview with EurasiaNet.org, 54-year-old Şalaru scoffed at NATO critics, stating that in “civilized countries” – code among Western-oriented individuals in the post-Soviet space for EU members and the United States – NATO is synonymous with security, safety and national defense.

Şalaru went on to note that Communist Party boss Vladimir Voronin, a former Moldovan president, frequently vacations at a Czech mineral-water spa. If Western values are so pernicious, Şalaru quipped, Voronin ought to support his words with actions, and “instead … go for two weeks to drink mineral water in Donbas and Lugansk [in Russian-occupied eastern Ukraine] to see how good it is there.”

Rebuilding public support for NATO will take time, observers say. Dionis Cenușă, a political analyst from Chișinău’s non-profit think-tank, the Expert-Group, believes the only way to counter “the dominance of anti-NATO Russian rhetoric” is via “effective communication” that emphasizes the non-military, “practical help” that Moldova receives from NATO. An example of such assistance is a program that promotes the eradication of harmful agricultural pesticides.

The United States shows no sign of letting its enthusiasm for Moldova flag. In March 7 comments to Defensenews.com, Lt. Gen. Ben Hodges, the commander of US Army Europe, said that military engineers will head to Moldova as the US looks “for ways to do more exercises in the southern flank of NATO.”  NATO likewise appears inclined to take the long view. “Time is on our side,” the North Atlantic Alliance said in a March 4 statement.

Mihai Gribincea – who served from 2010-2015 as Moldova’s envoy to NATO, and who now is the country’s ambassador to Romania – contends that the corruption issue should be separated from the security debate surrounding NATO. “NATO's support cannot be influenced by this ‘cancer’ of Moldovan society,” asserted Gribincea, referring to corruption. “We must not get closer to NATO as mere consumers of security, but we have to be providers of stability in this region.”

The Barometer of Public Opinion in November received support from the Soros Foundation–Moldova, which is part of the Soros foundations network. EurasiaNet operates under the auspices of the Open Society Foundations in New York, a separate entity in the Soros network.