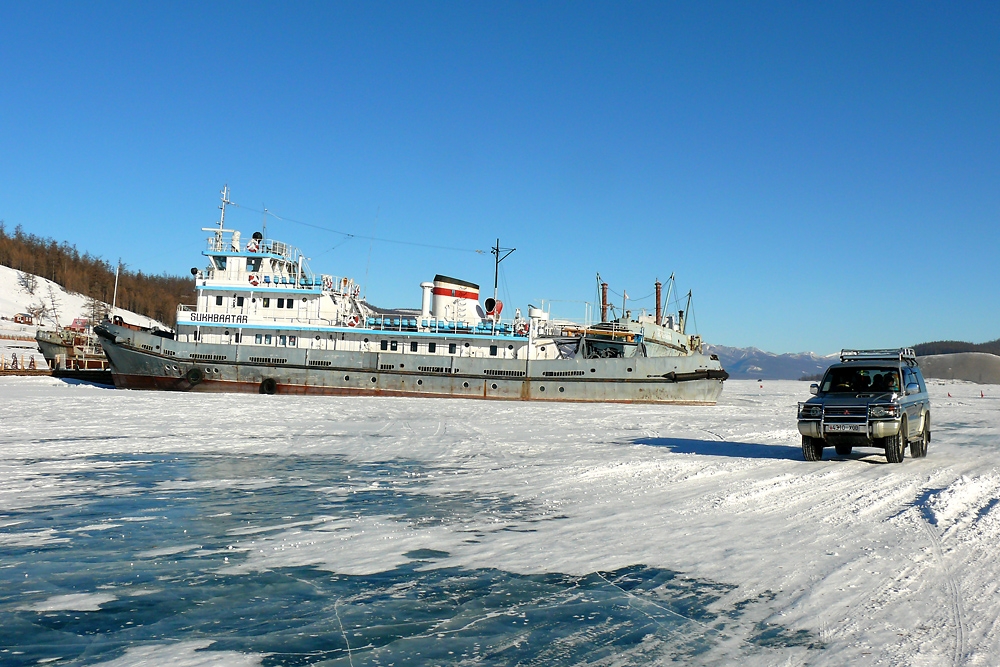 An SUV drives past the passenger ship Sukhbaatar stuck in the thick ice on Khovsgol Lake in Mongolia’s northernmost province. 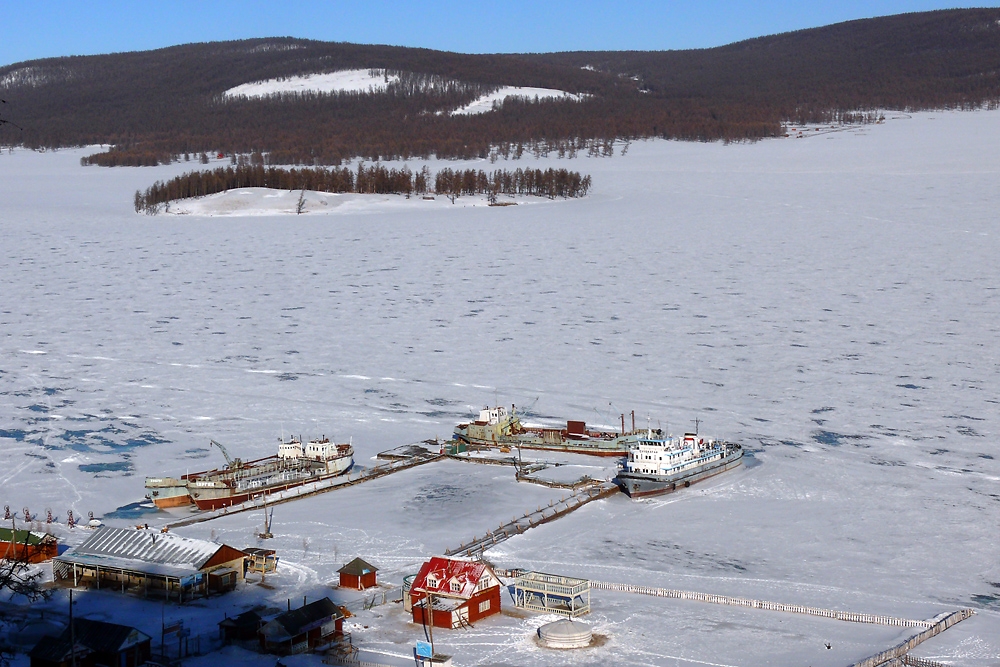 Trapped in ice, ships sit idle in the unused harbor of Khatgal. 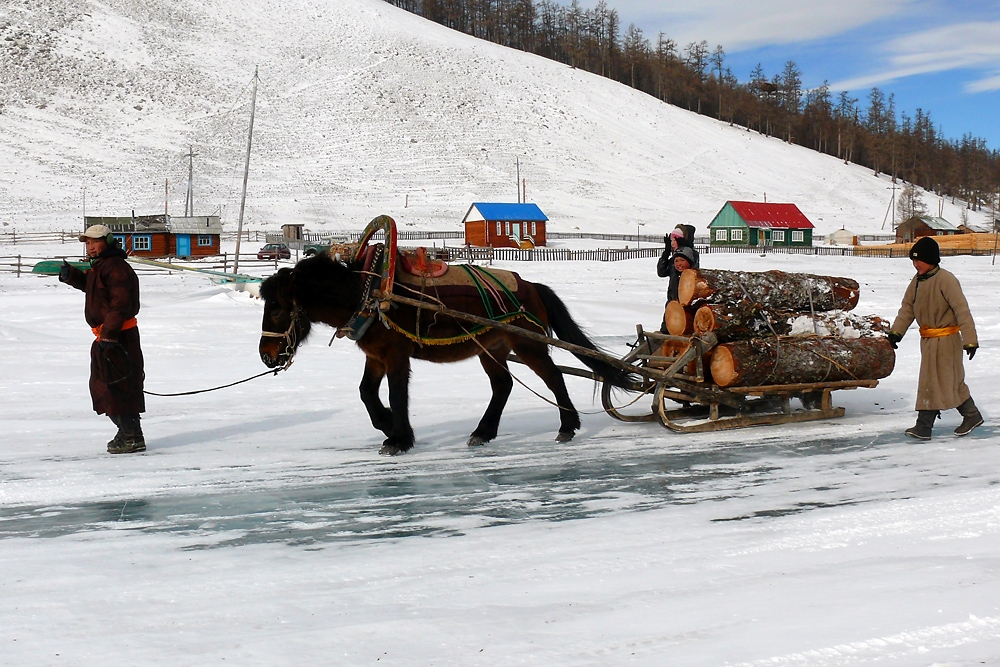 Men return from the forest with tree trunks for firewood strapped to a sledge. 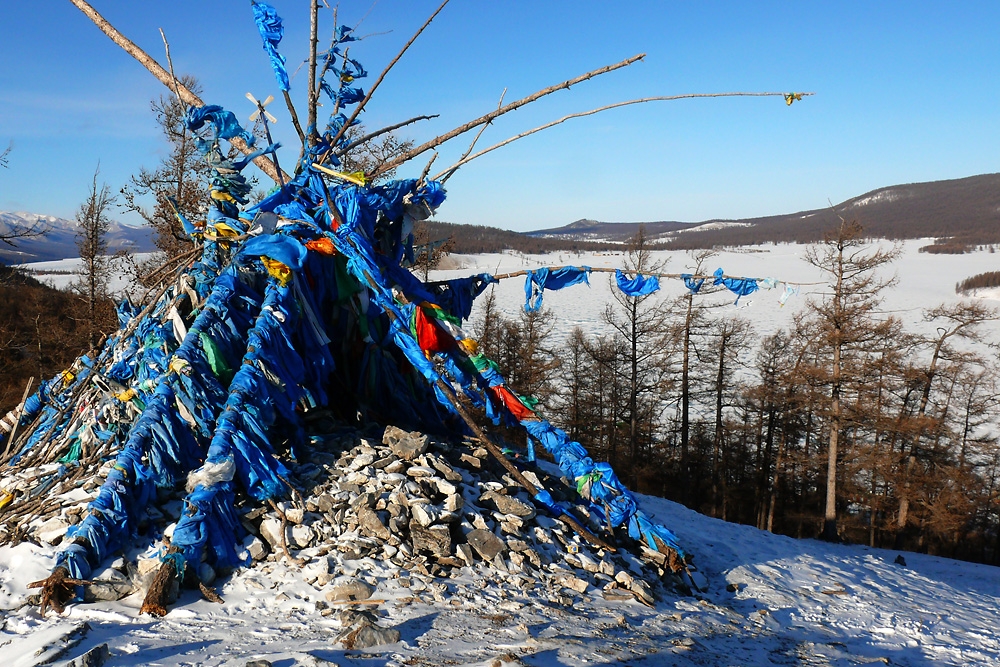 A shamanic ovoo, a kind of shrine, decorated with silk scarves sits on a hill overlooking frozen Khovsgol Lake. 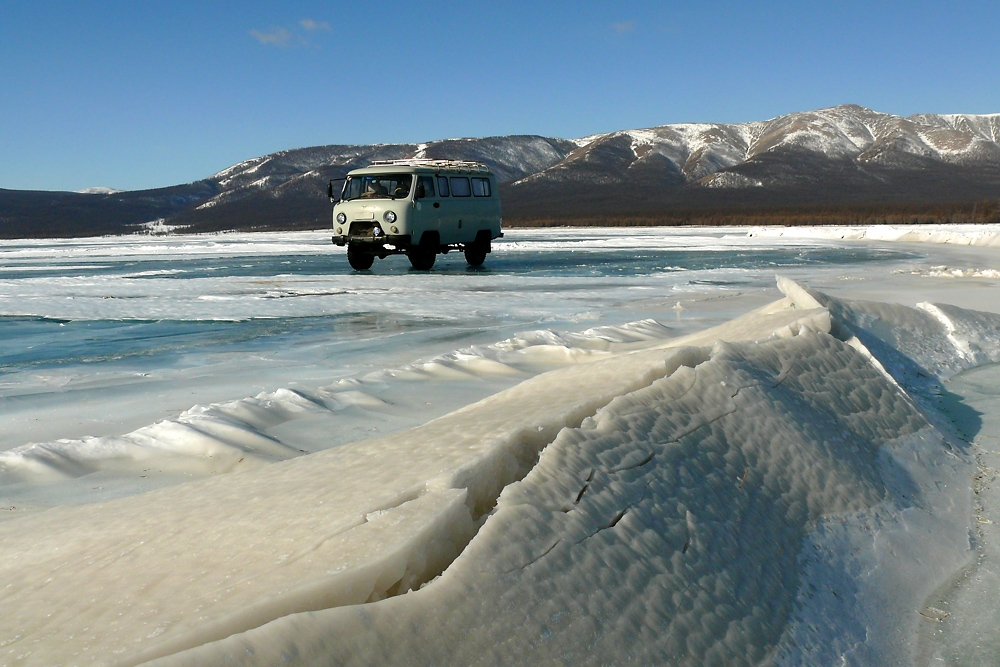 A pressure ridge on the lake buckles upward, forming an elevated crack, which makes travel dangerous. 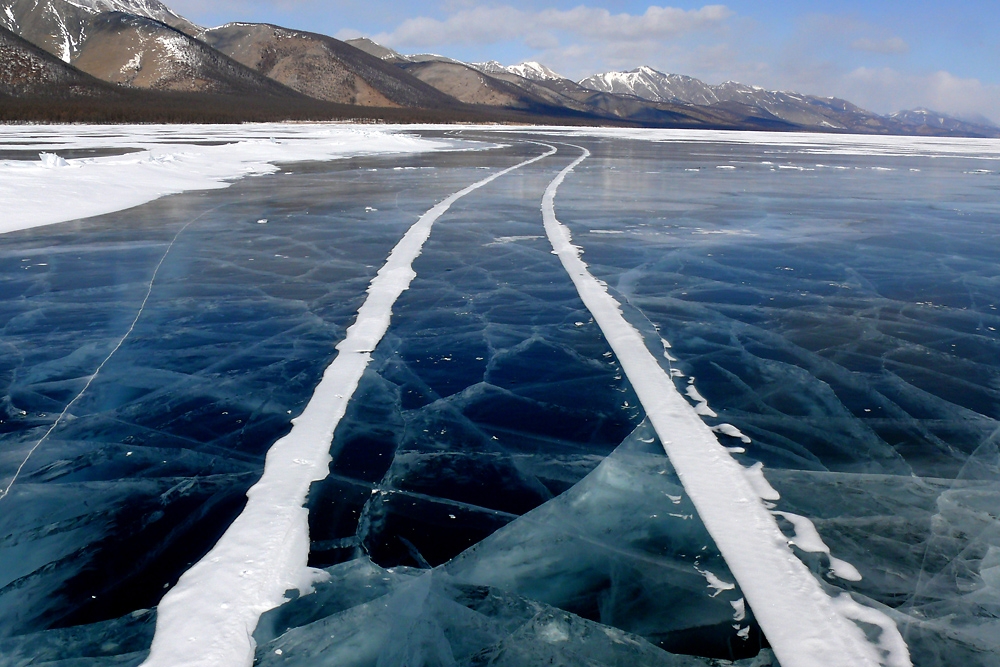 Snow covers many parts of the ice and remains until swept away by strong winds, giving away the previous route of a vehicle. 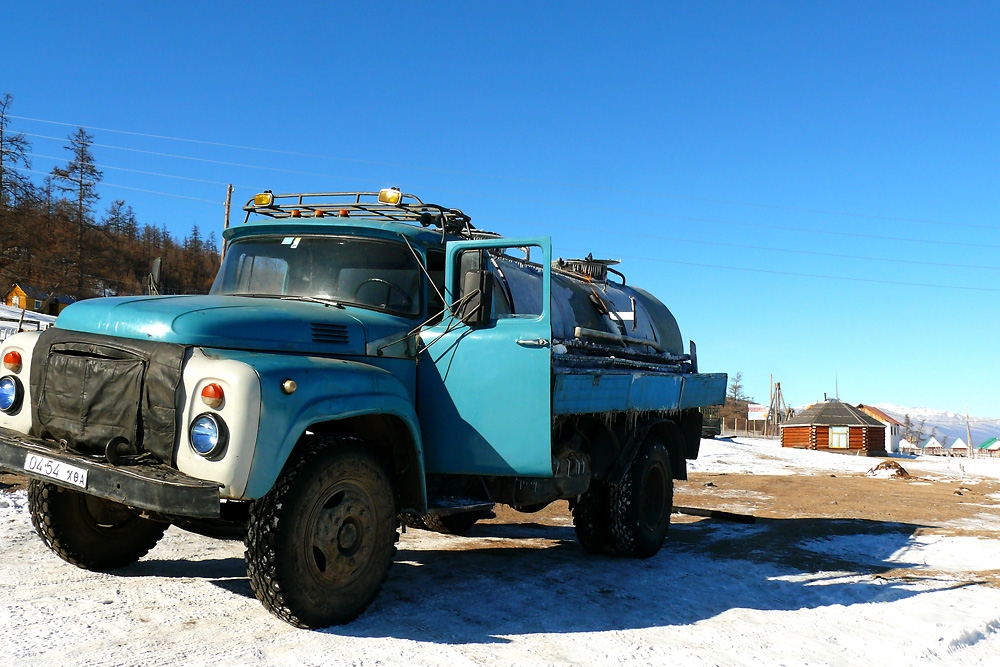 Soviet-era Russian trucks, formerly used for carrying oil, are now used to transport water from the lake to nearby households. 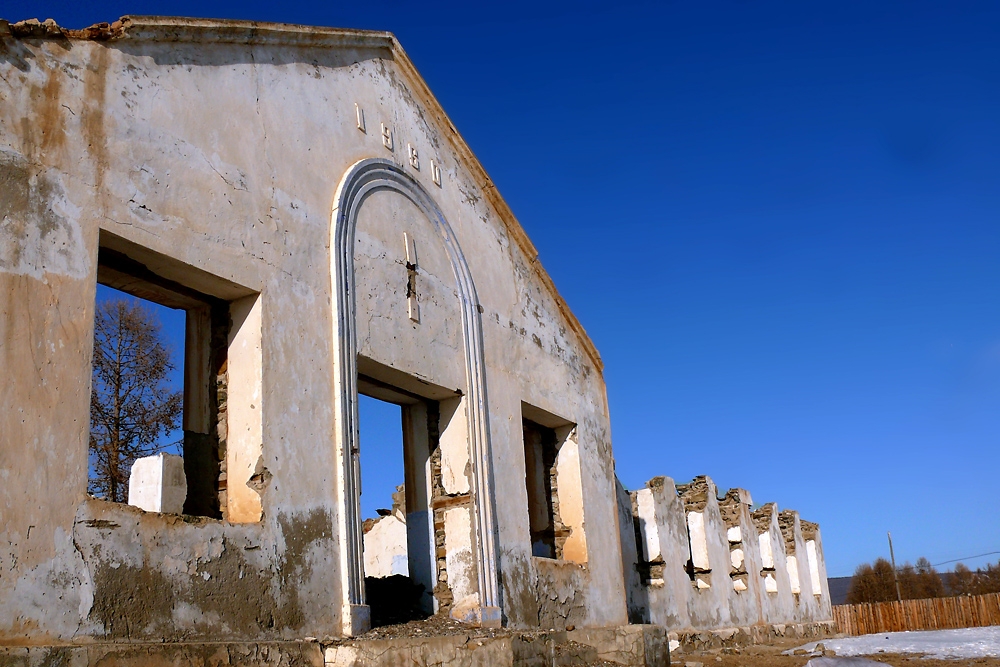 A former Khatgal administrative building built in 1960 now sits in ruins, stripped of every reusable material. 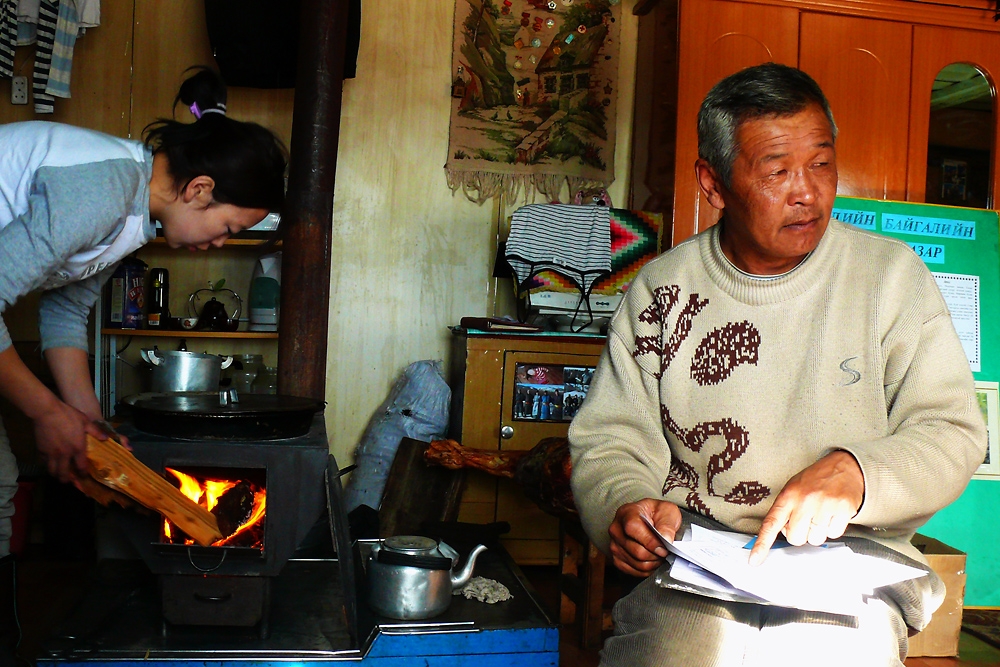 Sainbayar Jamsuren points out the amount of trash left by tourists he has collected around Khovsgol Lake. 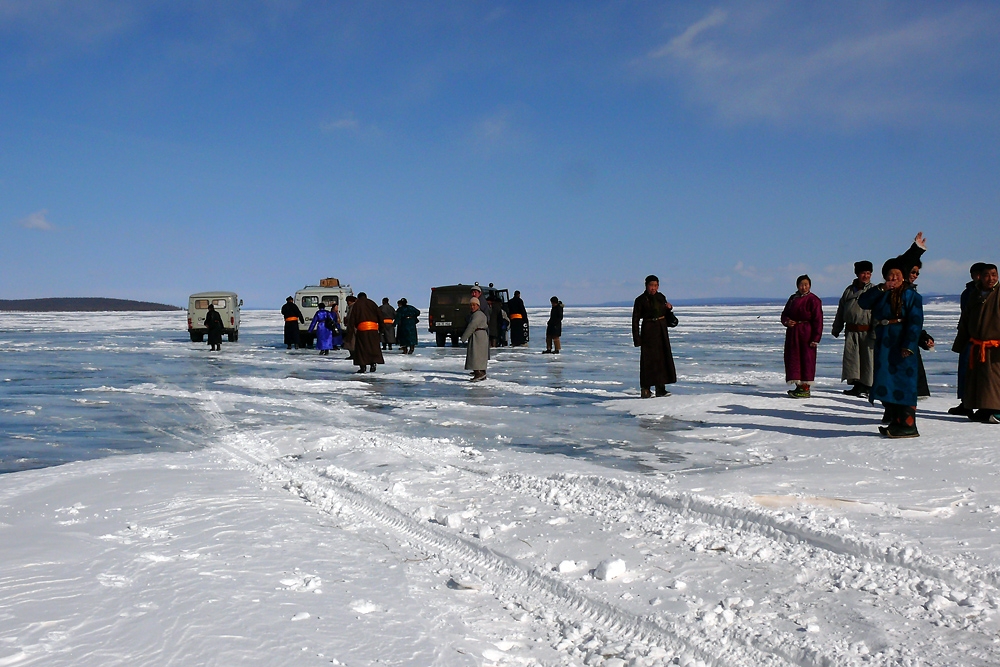 Passengers head back to their vehicles after safely navigating a pressure ridge. 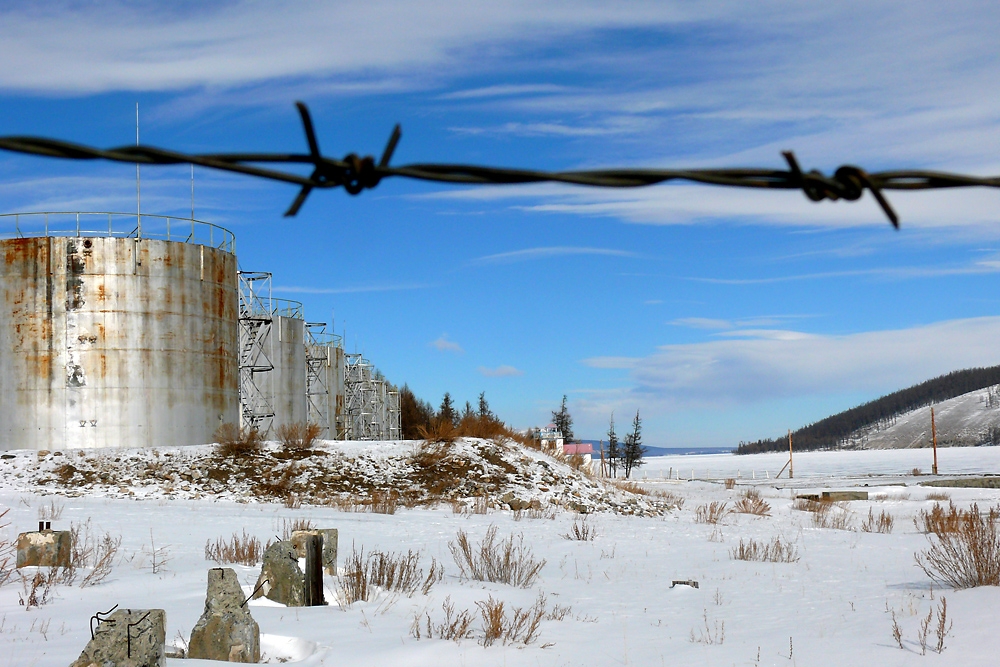 Rusty barbwire still delineate the forbidden zones of the oil depot controlled by the 24th Company. 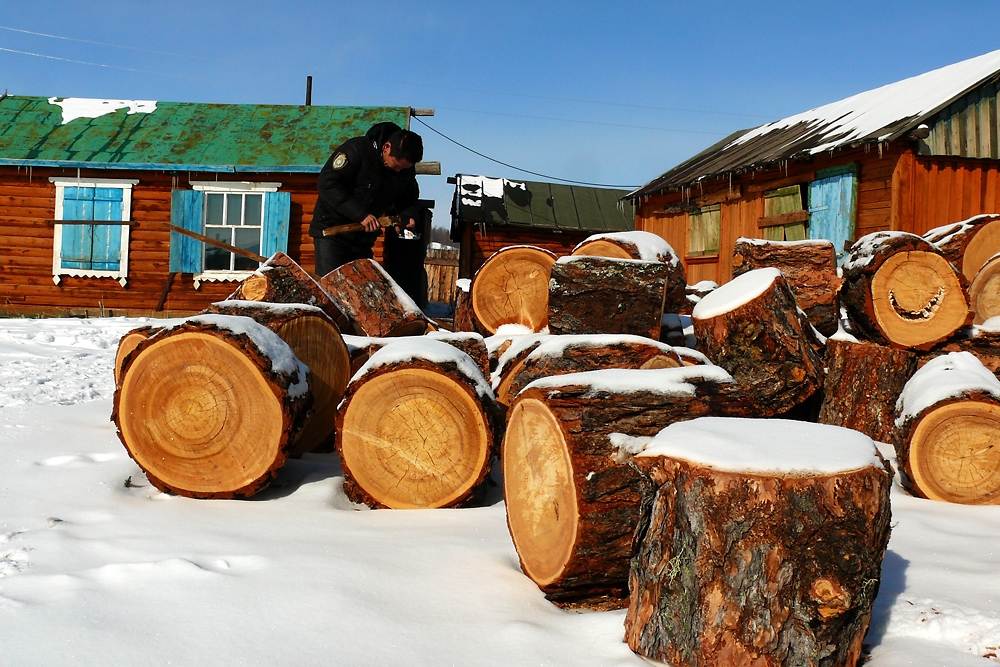 A man prepares to chop firewood in his front yard in Khatgal. 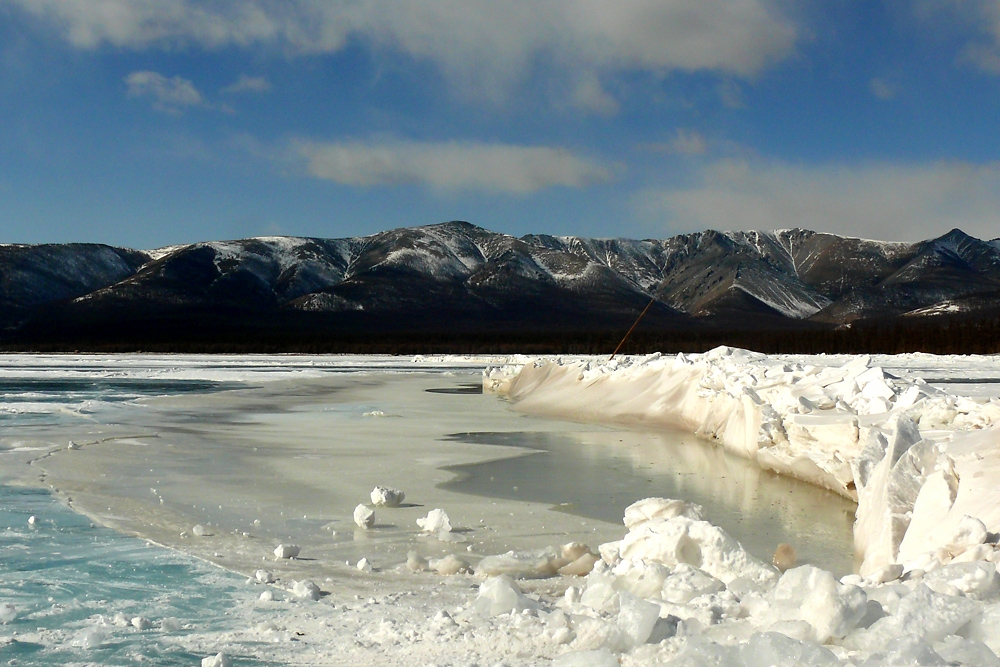 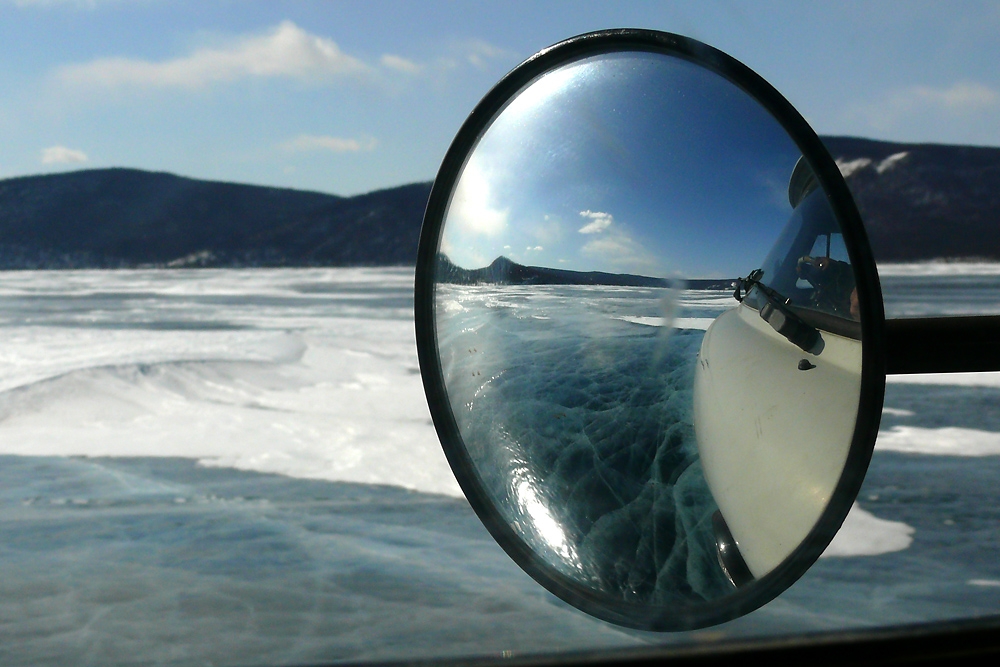 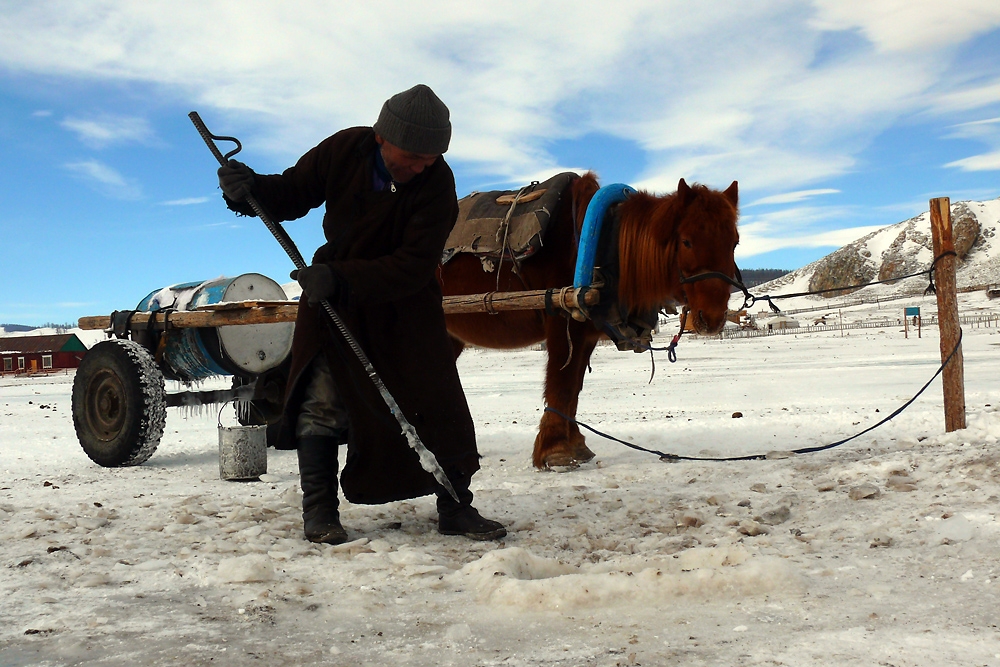 An old man breaks ice formed on a hole, where he will pull up untreated water for his home. 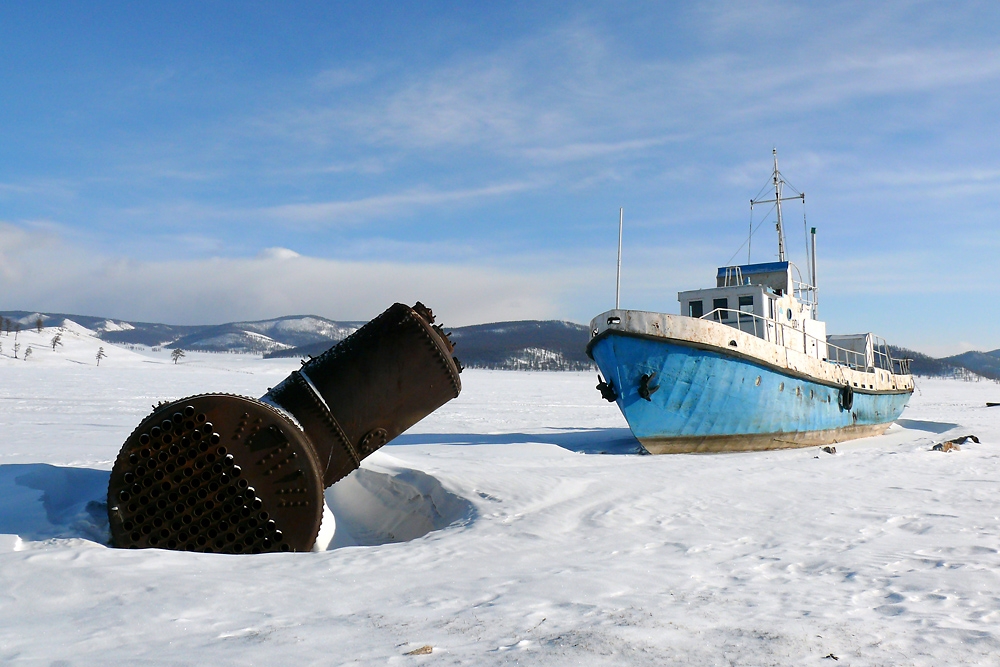 An old oil tanker engine lies abandoned in ice next to a private tourist boat, which remains frozen for half the year.
prev
next

Accelerating to 60 kilometers per hour on a frozen lake in Mongolia is generally not a good idea. A light tap on the brake pedal, a quick swerve to avoid a mound of snow, and the Russian-made UAZ minivan starts spinning in circles, the driver struggling to regain control. “We are only two people so the machine is very light,” offers Chimbdorj, the driver, as a form of apology.

Every winter, dozens of small vehicles ply the ice across northern Mongolia’s Lake Khovsgol. At 130 kilometers long and up to 40 kilometers wide, the lake surface -- frozen more than a meter thick -- offers passengers a shortcut and respite from an otherwise bone-crunching journey across unpaved mountain tracks. On an otherwise smooth ride, ice drivers keep a wary eye out for pressure ridges, a break formed by expansion and contraction of surface ice. Straying too close can prove fatal.

In early February, two trucks bearing 13,250 liters of petrol broke though the ice less than 200 meters from the shore. One sank 45 meters and killed a co-driver; two other drivers managed to escape. The military fished out both tankers without spilling any oil, averting what could have been an environmental catastrophe. Both trucks were driving illegally in defiance of a 17-year-old law prohibiting transportation of inflammable material across the ice.

Vehicles weighing more than 10 tons are not legally allowed to use the ice road, though locals admit the shortcut is difficult to resist. “We all know the risks, but the mountain roads are so bad truck drivers often break the law,” admits Tserdemba Tambalsuren, a school teacher and head of the local Children’s Eco-Club. Fatal accidents are also relatively rare and people’s memory short, encouraging drivers to take risks, he adds. Before this year, the last fatal accident was in 2008 when a van carrying hospital staff fell though the ice, killing all seven people onboard.

As Asia’s second largest lake in terms of volume, Khovsgol contains more than 70 percent of Mongolia’s fresh water reserves. During the communist era, the lake, upstream from Russia’s fabled Lake Baikal, was used to ferry Russian oil from near the border -- 13 kilometers away -- to industrial towns, by boat in summer and truck in winter.

“Ships would come in three times a week and in winter the trucks would travel every day,” recalls Tumurbaatar Hunji, a former accountant at 24th Company, the government agency operating the depot. During the communist era, the company operated 200 trucks that would travel continuously in winter to feed the six 1,000-ton-capacity storage tanks at the depot. Accidents and oil spills were common, though seldom reported, he said. Official estimates are that 30 to 40 trucks, some presumably still loaded with petrol, have gone down in the lake, although Hunji believes the number might be higher.

A local environmental movement in the late 1980s forced the government to shut down the depot and clean up Khovsgol. A daring 1987 article written by Tserendorjyn Baldorj, a Mongolian journalist, criticized the government’s apathy and failure to replace badly maintained ships. Officials soon took notice and industries discharging waste into the lake -- including a wool washing plant -- were shut down. The economic decline that accompanied the end of communism turned what was once a bustling harbor into a graveyard for rusting vessels. The collapse of the local economy also spurred many residents to depart for Ulaanbaatar and elsewhere in search of work.

The net result has been that many areas around Lake Khovsgol have reverted to wilderness, and, since 1992, these areas have enjoyed the status of a national park. Today, about 3,000 people live in the town of Khatgal, less than half its communist-era population. But traffic across ice is still cause for concern.

While petrol trucks pose a significant danger, local activists now seem far more alarmed by the amount of trash that tourists scatter around the lake during the summer months. Tourism now provides the main source of income for area inhabitants. According to park statistics, 14,590 tourists came to the area in 2010. With local officials having no waste management system in place, non-governmental organizations (NGOs) have assumed responsibility for garbage collection. Since 1998, Sainbayar Jamsuren, who is paid by a Swiss NGO, has made yearly rounds to local guesthouses and the 35 tourist camps scattered around the lake to collect trash while also recovering trash in the forests left by travelers. He averages about 150 trips a year.

“We also need to scoop through the forests because tourist camps often illegally bury their trash or dump it in the lake,” Jamsuren says. Last year he recovered 30,000 mineral water bottles and 6,000 butane gas canisters from camping stoves. Batteries thrown into the lake are also a major problem, he says.

But activists feel tourism is more desirable than highly polluting industries. “It was a relief when the industries shut down even though many lost their jobs. But at least Khovsgol Lake was saved,” says Tambalsuren, the schoolteacher.