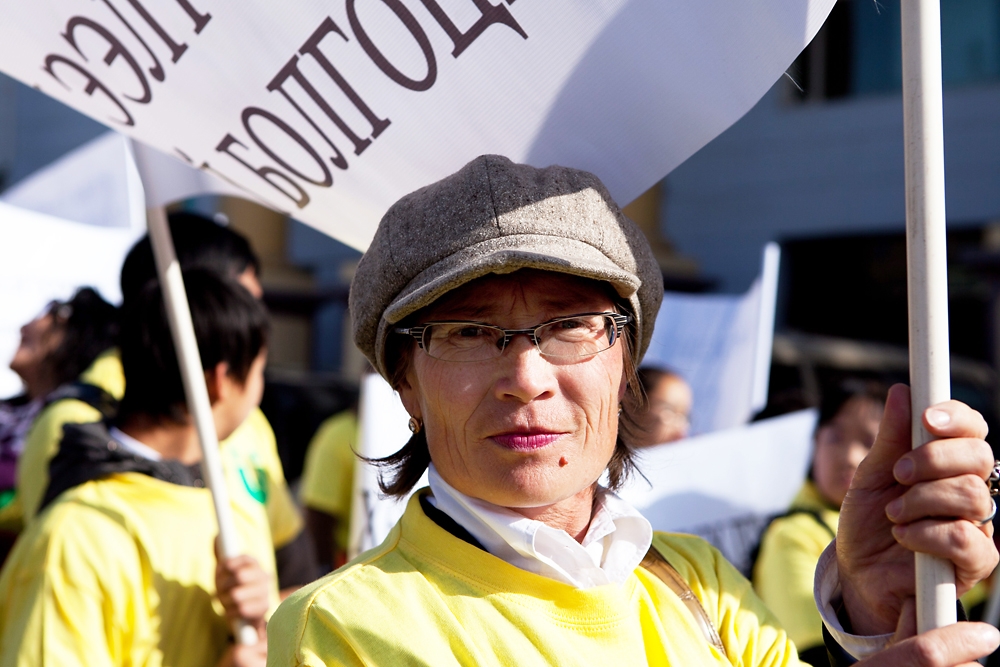 If all goes as envisioned on June 28, Mongolia’s parliament will no longer be a male bastion.

Supported by recent revisions to Mongolia’s election law, a record number of women are on the ballot in parliamentary elections on June 28. They are seeking seats in what has traditionally been a male-dominated body. Of the 544 candidates running for the 76-seat parliament, 174 are women – well above a newly established 20-percent quota. But where their names appear on the lengthy ballot may be a determining factor in whether this becomes a breakthrough occasion.

Currently, the proportion of women in the Ikh Khural, or parliament, ranks Mongolia near the bottom of the list of countries surveyed by the Geneva-based Inter-Parliamentary Union. Women’s rights activists say government policies and patriarchal attitudes have discouraged women from entering politics. Data collected by research group Monfemnet even shows a gradual decline in the number of women elected to parliament in all elections since 2000, when women comprised 11.8 percent of the legislature. The figure dropped to 6.6 percent after the 2004 vote and to 3.9 percent in 2008.

“It’s a paradox that women … hold 70 percent of the jobs in the health and education sectors, and yet more than 90 percent of the people in positions of power are men,” says Otgonsuren Jargal, a veteran journalist and environmental activist who runs Nomad Green, a citizens’ environmental reporting initiative.

Jargal is a Green Party candidate contesting a single-seat electoral district in Sukhbaatar Province. She says she never could have dreamed of being nominated by her party were it not for the female quota. “Now I know it's possible. After working for six years in civil society, this is a great opportunity to share what I have learned and believe in … no matter if they vote for me or not,” she told EurasiaNet.org.

This election cycle is not the first time Mongolia has experimented with quotas to encourage female candidates. In 2005, after lobbying from women's groups, political parties were told at least 30 percent of candidates must be women. The law was suddenly revoked just before the 2008 election, however, and never tested.

Members of Women for Social Progress (WSP), a non-governmental organization based in Ulaanbaatar, believe the decision to rescind the 30-percent quota was made without substantive discussion. The experience underscores the lengths some MPs will go to limit the political participation of women in Mongolia, contends WSP Director Odmaa Davaanyam.

Davaanyam believes the reintroduction of a quota last year, though reduced to 20 percent, is thanks to pressure from advocacy groups. While it deserves to be lauded in theory, she argued that in practice it may not do much to change the status quo: that is because the new rules say nothing about where women should appear on party lists. "If you look at the party lists, very few women are at the top,” Davaanyam says. “The law is written, but in real life parties are doing little to support women."

Mongolia has a 5 percent threshold for a party to enter parliament and, according to the Sant Maral Foundation, a respected pollster, at least three parties are expected to win seats via this proportional system.

The proportional system allots 28 seats. That means it is unlikely a party can win more than a dozen seats. The two leading parties – the Democratic Party (DP) and the Mongolian People's Party (MPP) – have nine and 11 women respectively on their 28-member lists. But DP’s first woman is placed at number seven; MPP’s at number 10.

"Women are still at the bottom of the list because [the law] hasn't specified how that 20 percent quota is to be secured," says Sukhjargalmaa Dugersuren, a former senior government aide who helped draft Mongolia's gender equality law. Dugersuren tops the party list for the Civil Movement Party (CMP), the first party to field an overwhelming 95 percent majority of female candidates. While her party has barely registered on pre-poll opinion surveys, and is not expected to secure any seats, Dugersuren is confident they have made their mark. "All over the country people know there is a party that has nominated women intent on pushing for change," she states.

Another change to the electoral code offers hope for female candidates, however: Not all seats are determined through party lists. The new, mixed voting system is expected to help the electoral chances of women, independents, and smaller parties.

Of the 76 seats in the Ikh Khural, 48 are to be determined in individual races.

In these lists of individual candidates, selected by district, but often associated with a party, women stand out, says Naranjargal Khaskhuu of Globe International, a Mongolian democracy watchdog.

"Women are perceived as less corrupt," she says. It is an important consideration in a country that ranks 120 out of 183 in Transparency International's Corruption Perceptions Index. She believes that because of growing discontent over the government's handling of Mongolia’s vast mineral resources, voters are keen to see more women enter the legislature.

Khaskhuu is cautiously optimistic, hoping at least 10 women will win seats. But she remembers the last time. "Take the 2008 elections," she says, referring to the fact that only three women were elected that year from the 67 on the ballots. “It's the results that prove if mentalities have changed. So far we haven't had much evidence of that.”