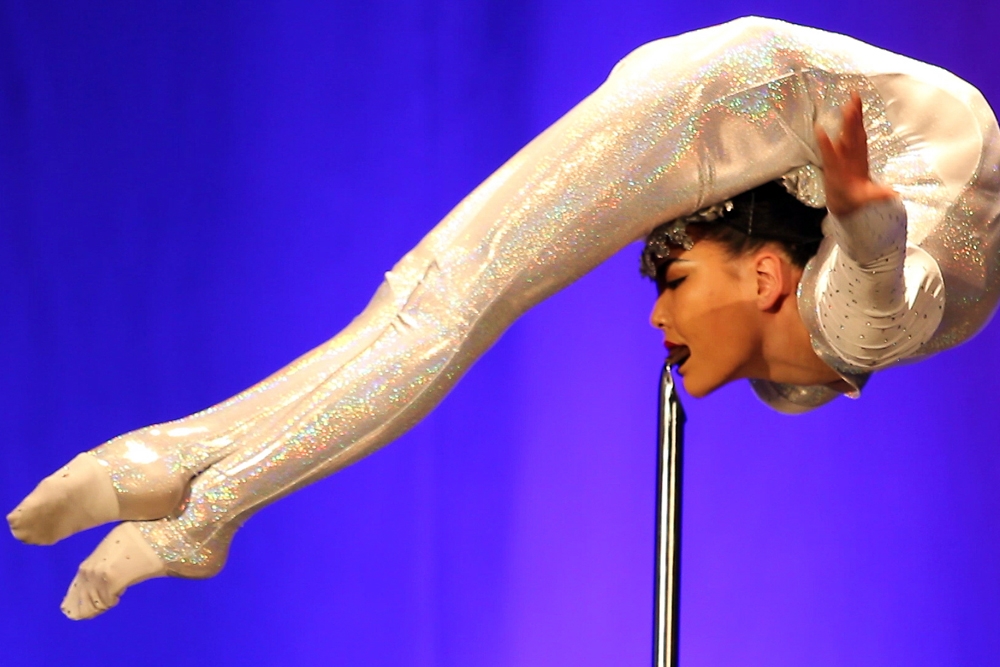 Mongolia is appealing to the United Nations to have Mongolian contortion included in the UNESCO list of traditional cultural heritages. (Photo: Pearly Jacob)

For some, a contortionist is nothing more than a freak-show act, doing something unnatural, not a thing of grace or beauty. But in Mongolia, flexing and bending the body into seemingly impossible positions has been perfected into what some call a uniquely Mongolian tradition. And these advocates of the art form are seeking international recognition.

Contortion is a highpoint at daily hour-long recitals of Mongolian traditions at the State Drama Theatre, a stout ornamental Soviet-era building in downtown Ulaanbaatar. The applause begins when a female contortionist opens her act with a perfect handstand, her lower back arched until it almost touches the back of her head, legs delicately curved in the air with toes stretched to form an elegant “S” shape.

The clapping grows louder as the contortionist, gripping a mouthpiece mounted on a pole with her teeth, twists her body until her legs hover in front of her face, arms outstretched to maintain balance. “Mongolian contortion performances are choreographed to show the beauty of the human body. We want contortion to be perceived like a classical art form, just like ballet,” said Norovsambuu Budbazar, one of Mongolia’s best-known contortion trainers.

Norovsambuu, who goes just by her first name, believes that Mongolians have honed their contortion skills over hundreds of years, linking them to a local folk dance called Biyelgee, which requires kneeling dancers to bend backwards until their upper backs nearly touch the floor.

“There are records from the 17th century about the first theater called ‘Saran Khukhuu’ started by Dazanravjaa. It’s said that this theater had women who could move like they had no joints,” said Norovsambuu, referring to a historical Buddhist lama respected as a saint, poet and playwright in Mongolia.

But opinions differ on the historical legacy of Mongolian contortion. “It’s not exactly something we inherited for hundreds of years, but we did manage to adopt it and turn it into a national art from,” said Nomintuya Baasankhuu, a former contortionist and art historian at the Arts Council of Mongolia.

Baasankhuu believes contortion really emerged as a performance act with the establishment of the Mongolian State Circus in 1941, which introduced its first official contortionist, Tsend-ayush (who like most Mongolians at the time used only a single name). “She is the one who really started the first contortion school in Mongolia. Later there was Majigsuren, the second contortionist of Mongolia. With her contortion became enriched, not only with flexibility but also with being strong and being able to balance the body,” Baasankhuu said.

In 1958, Norovsambuu joined the circus as a nine-year-old after being spotted by Majigsuren as a potential talent. “All the different techniques we have, different positions and choreographs, really come from these three people,” said Baasankhuu, the historian.

Today at 65, Norovsambuu is known as the last living legend of Mongolian contortion. She believes Mongolia’s dedication to contortion has given the art a unique place in the world.

Mongolian contortionists have become headlining acts in world-famous circus companies like Canada’s Cirque du Soleil. Since 1994, a total of 37 Mongolian artists have signed on with the Cirque du Soleil, of whom 29 were hired as contortionists. By email, a Cirque du Soleil spokesperson wrote that while Mongolia has a strong circus heritage in several acrobatic disciplines including teeterboard and Russian bars, the country’s contortion tradition is unique. “Mongolia has a specialty of contortion that we understand to be a result of physical aptitude and strong traditional coaches,” he said.

American artist Nancy Kate Siefker, a trained gymnast and ballet dancer, started contortion classes in San Francisco in 2008 after locating a Mongolian trainer in the city. This year she made her second trip to Mongolia for a short intensive training session following her teacher’s advice. Siefker admits that watching Mongolian contortion dispelled notions of what she previously viewed as a sideshow act.

In 2011, Norovsambuu headed a steering committee to nominate Mongolian contortion for inclusion in UNESCO’s list of intangible heritage, a UN program that allocates funds to safeguard and raise awareness about the significance of cultural traditions around the globe. UNESCO has yet to make a decision on the Mongolian application. A UNESCO spokesperson did not respond to EurasiaNet.org’s request for comment.

Baasankhuu from the Arts Council, who helped draft the UNESCO bid, believes that though many people in the performance arts world already accept contortion as a Mongolian art form, a nod from UNESCO would be a boost. “UNESCO recognition can reassure [the world] that there is dedication from the people of Mongolia to contortion and it should be recognized as a Mongolian heritage,” she said.