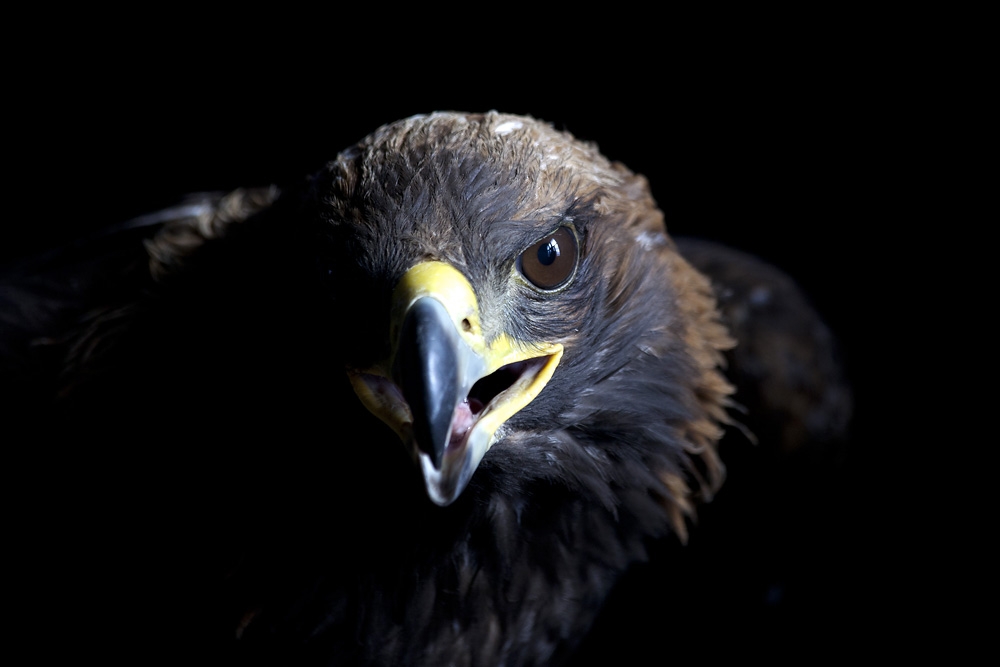 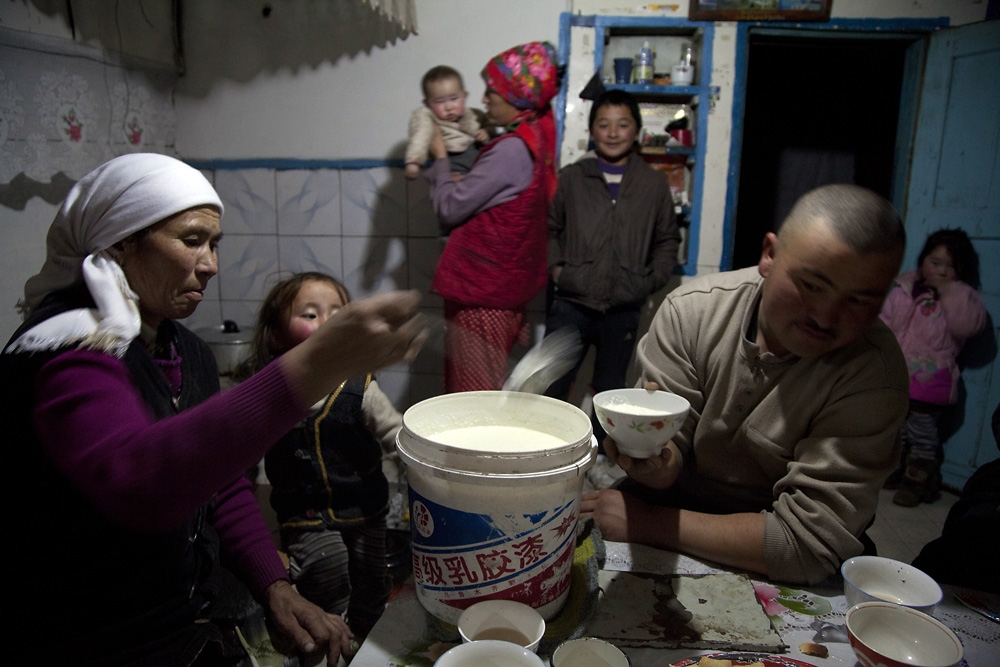 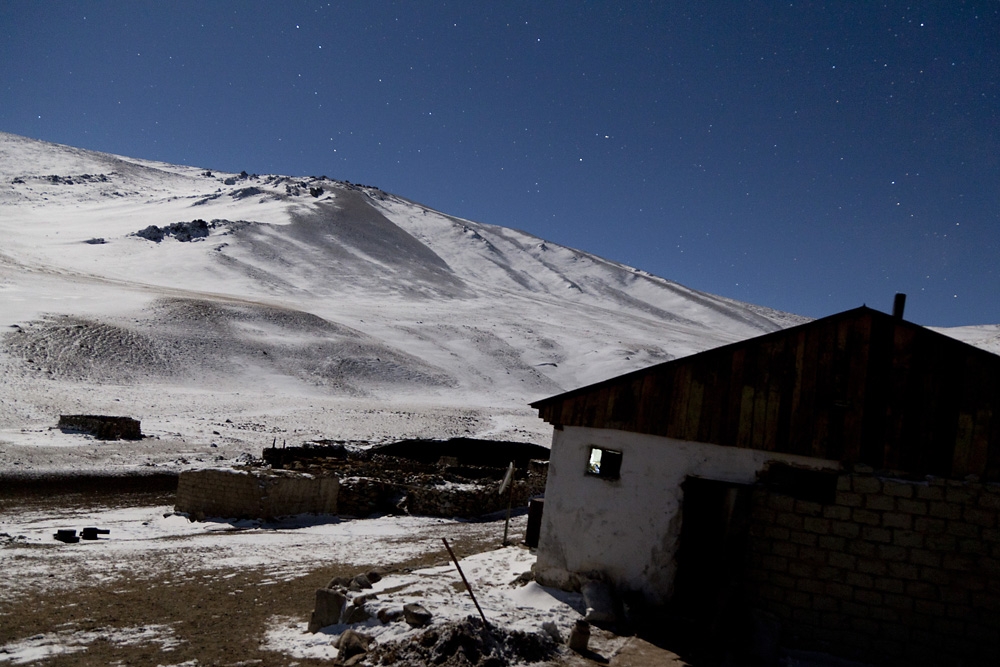 Shatirbai and his family move back with their animals to this house outside Tolbo by early autumn. 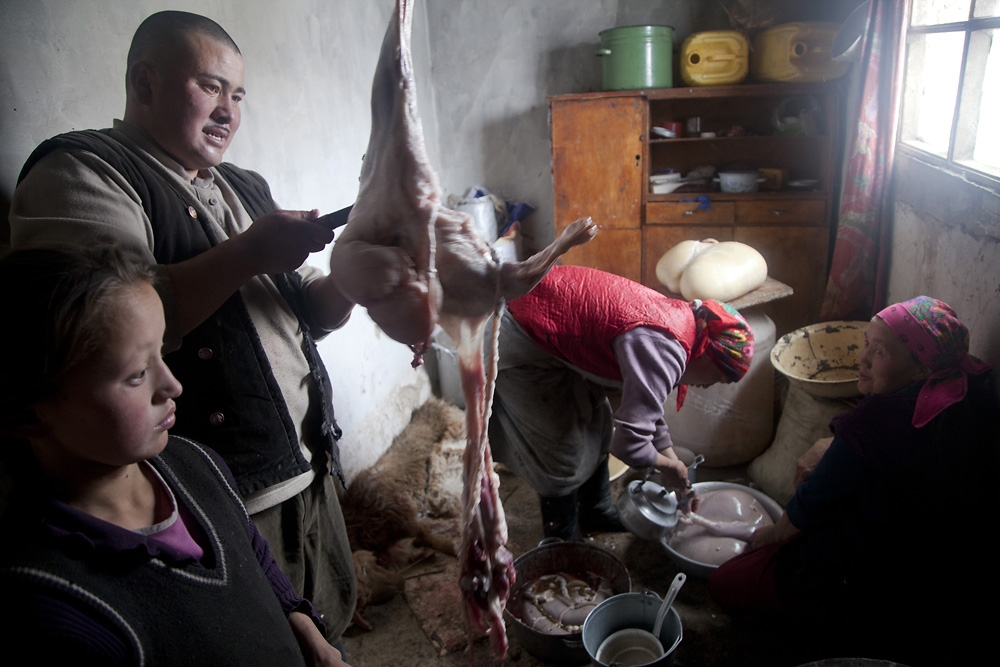 Shatirbai's son, granddaughter, and daughter-in-laws prepare a sheep for dinner. 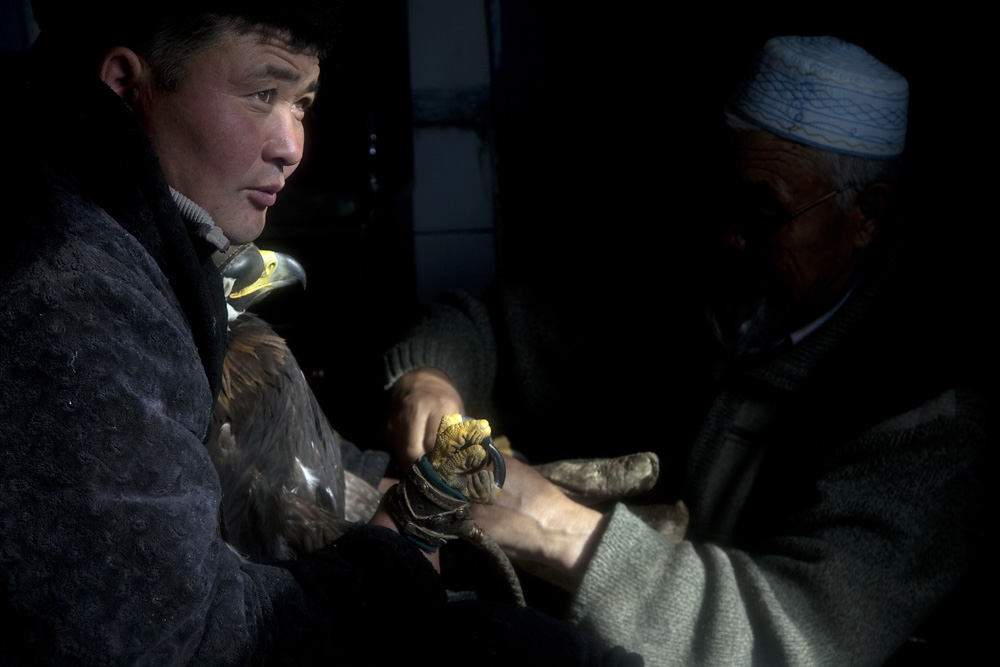 Shatirbai dresses a golden eagle for a hunt scheduled for the next day. 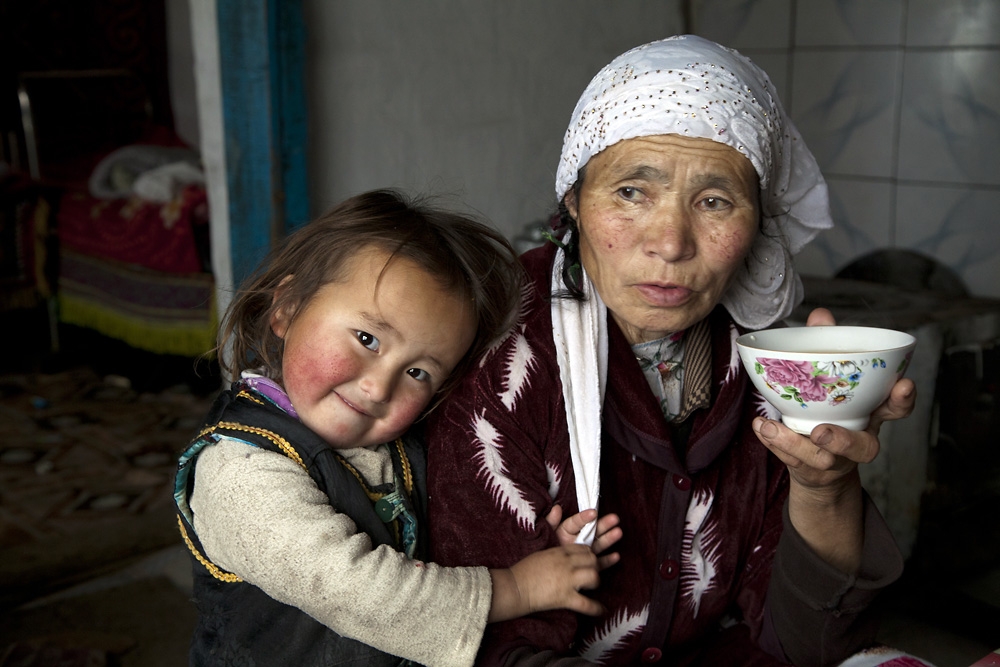 Shatirbai and his wife Khama live with their youngest son and his large family in a single home. 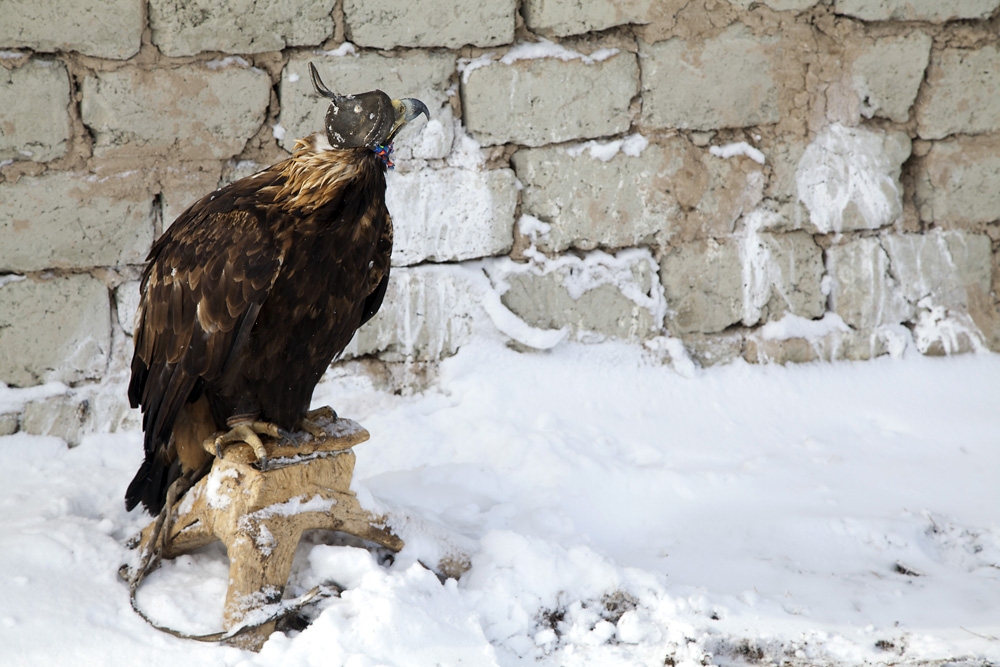 Orsbai's golden eagle sits on his perch outside their home, where he spends almost all his time day and night. 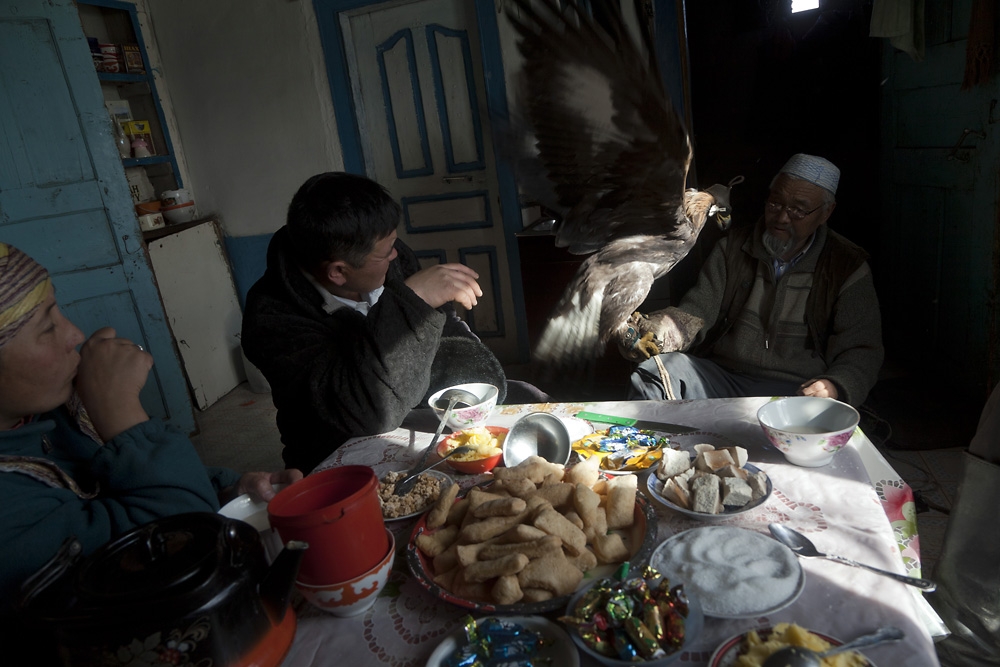 Shatirbai exercises a golden eagle for a hunt scheduled for the next day. 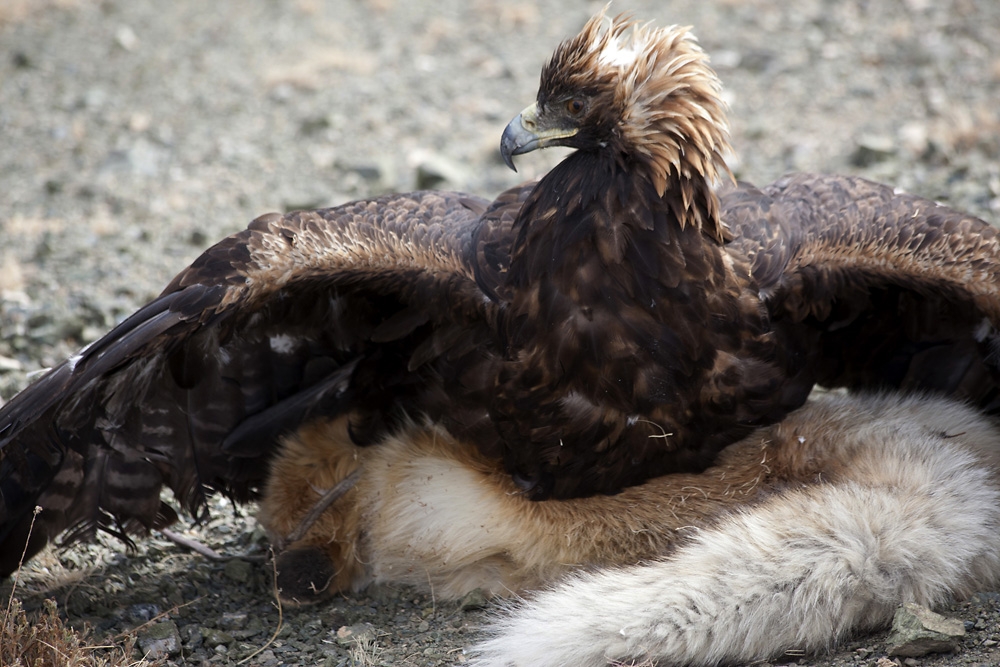 A golden eagle stands watch over the fox it caught. 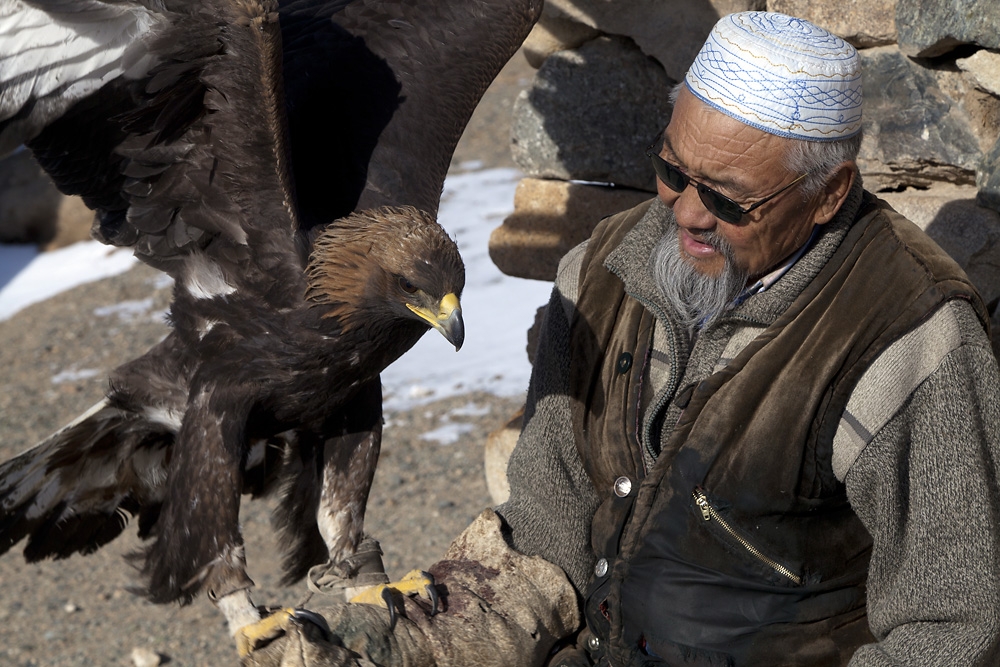 Shatirbai exercises a golden eagle in preparation for a hunt. 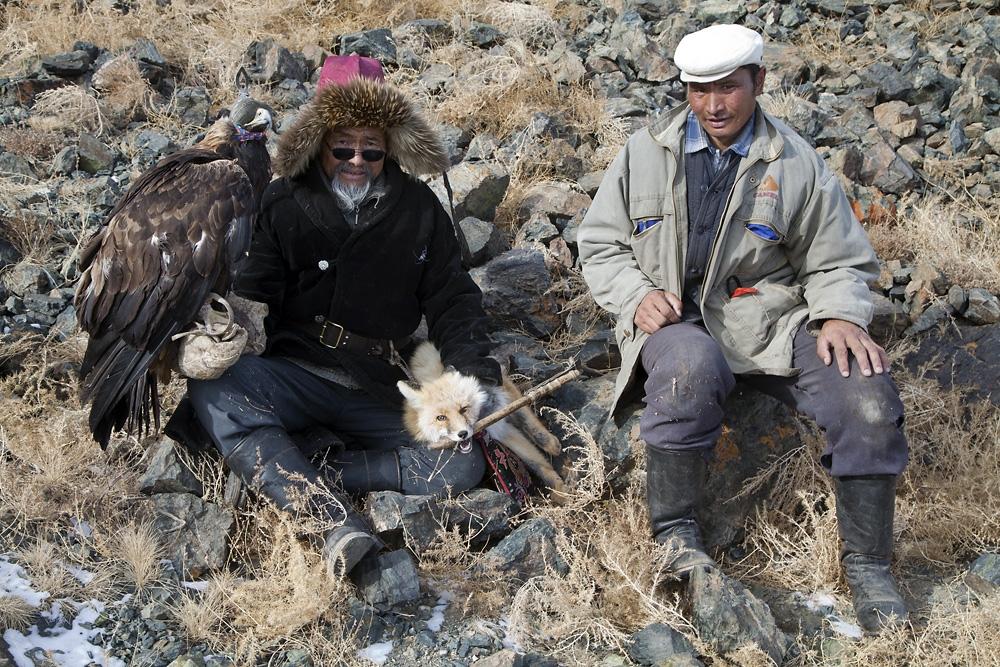 Shatirbai and his son Tuat sit with their golden eagle and the fox it caught outside Tolbo. 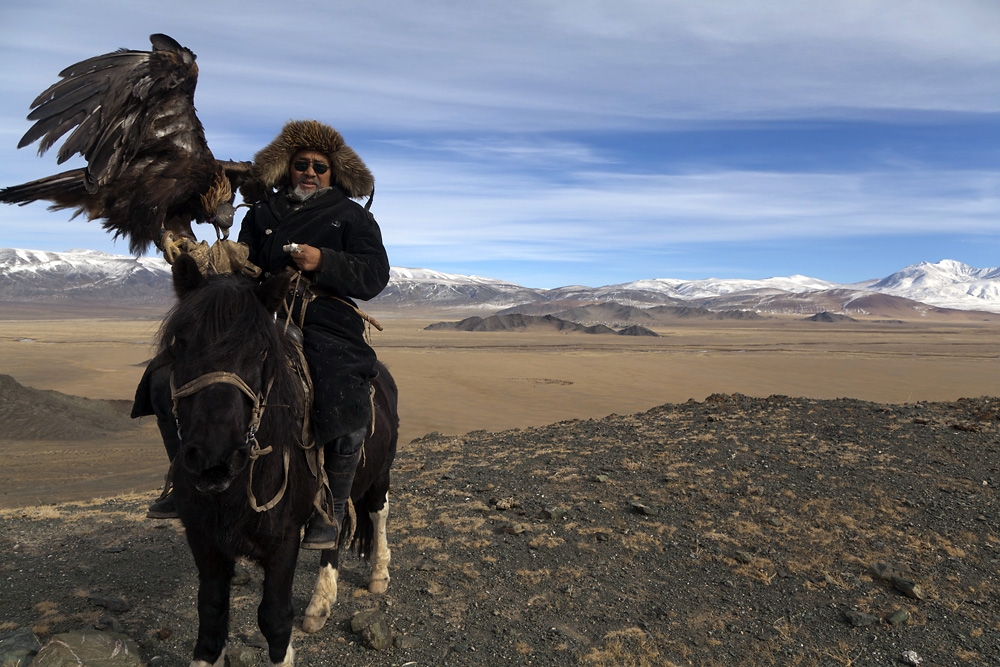 Shatirbai poses with a golden eagle just outside the western Mongolian town of Tolbo.
prev
next

Seventy-three-year-old Shatirbai was six or seven when his father first taught him to hunt with an eagle. By 15 he was doing it alone. He’s passed the knowledge on to his own sons, emphasizing that this tradition is an important cultural legacy that they – as ethnic Kazakhs – are responsible for maintaining.

Eagle hunting is a seasonal pastime, only practical in the autumn and winter after the birds have molted.

Shatirbai’s family of sheepherders moves between three steppe camps in spring, summer, and early autumn. Ahead of the brutal winters, each October the family retreats from their felt yurts to a couple of houses nestled in a hillside a few miles outside of the small, western Mongolian town of Tolbo. There, Shatirbai and his wife Khama live with their youngest son and his large family. Most days, Hiran can be found hooded and on her perch outside the house. Once every two days she is fed chopped, raw meat—usually fox, rabbit or cow.

The day before the hunt, Hiran is brought inside the house; she must get ample exercise to make her hungry enough to hunt for a fox (females are used exclusively as they are more aggressive). Shatirbai prepares Hiran by tethering her to a thick mitt that he then rocks up and down rapidly for several minutes at a time, as she tries to hold on like a cowboy on a bucking bronco.

One need spend only a few minutes with Shatirbai and Hiran to see their strong relationship. If it weren’t obvious, family photomontages around the house all seem to include a snapshot of Shatirbai with one of the golden eagles he’s trained over the years.

Though foxes are the most common prey, two well-trained, strong eagles can together hunt animals as large as a wolf. (Kazakhs and Kyrgyz also sometimes hunt smaller prey with falcons.)

On a recent morning, after reaching the top of a rocky bluff, Shatirbai removes Hiran’s hood and she quickly alights toward something no one else can see. After swiftly coasting down on a scuttling fox, the bird lashes its talons and elegantly sinks them into its prey.

Shatirbai could not be happier. Sitting with his bird, his son, and the dead fox, he poses proudly for a photograph. Kazakhs both in Mongolia and across the border in Kazakhstan have strived to preserve their rich nomadic cultural traditions in modern times. At least for today, in a desolate swath of the great Central Asian steppe, that heritage is alive and well.