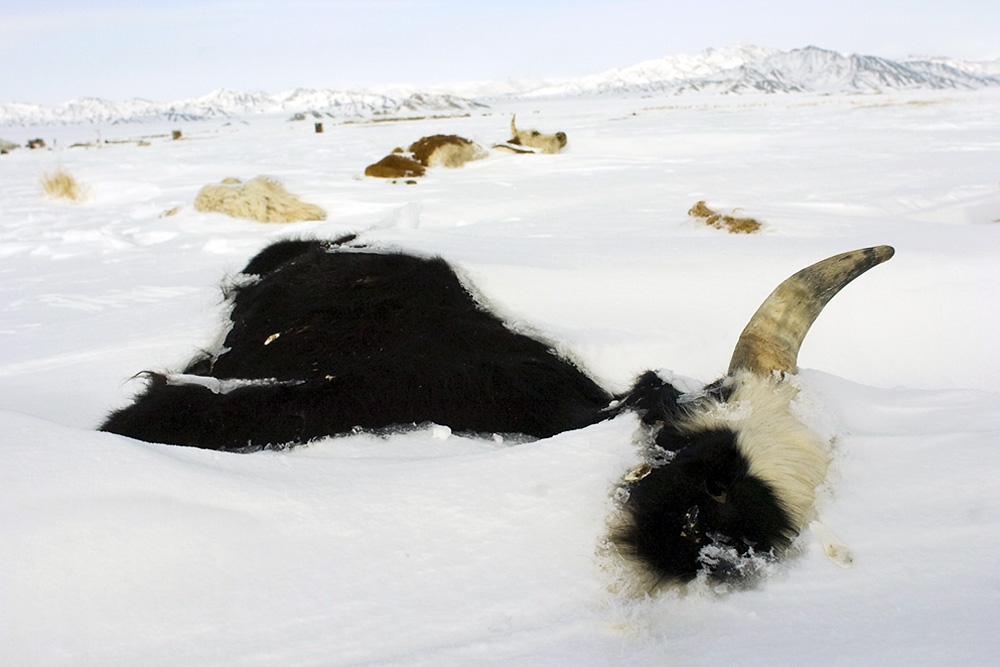 The dzud has killed more than 2.7 million animals, nearly a tenth of the national total. (Photo: Andrew Cullen)

Since January, temperatures have hovered around minus 30 degrees Celsius and snow has covered 90 percent of the landlocked nation. Known locally as a "dzud," the harsh winter weather has killed over 3.3 million head of livestock and has threatened food and fuel supplies in rural communities, aid agency representatives say. Tens of thousands of families have lost more than 50 percent of their animals and face a grim future. Now, as winter is slowly giving way to spring, the full effect of the devastation is coming into sharper focus. [For background see the Eurasia Insight archive].

Some in the international donor community have criticized the government's handling of the crisis, suggesting that officials were faulty in addressing human factors related to the disaster. Unchecked animal populations, unregulated pasture use, and a lack of preparation by both herders and government officials contributed to the severity of this year's dzud, some foreign experts contend. Neglecting to implement policies like herd-size regulations - especially for goats - now leaves Mongolia more vulnerable to dzuds in the near future.

"It's not clear - what they're going to plan," said one UN official, speaking on condition of anonymity, and referring to Mongolian government officials. The government "needs to be more transparent in their discussions. "We appreciate that this is not going to be easy, but we're expecting that [the government] makes some tough choices."

"There's already frustration from donor organizations," the official continued. If the government does not make a serious effort to avoid future dzuds, it "will not again have a donor response like this year's."

The severity of this dzud makes it difficult for the government, and Mongolians in general, to postpone what promises to be a painful debate about reforms. It will be a discussion that touches on the country's nomadic traditions. "They're at a crossroads. Is this the moment the government will look at cultural and environmentally sensitive issues and make changes?" said Rana Flowers, the United Nations Acting Resident Coordinator.

Currently, the government seems fixated on the immediate moment, striving to help citizens through the winter, rather than contemplating the future. The government has earmarked $1.2 million to the aid effort, mostly to provide hard-hit areas with animal fodder. However, officials say millions more are needed to address the consequences of the winter catastrophe. According to one UN estimate, an additional $4 million alone is needed to take care of the disposal of the animals that perished this winter.

The government has turned to local businesses and civic groups, foreign governments, and international organizations like the UN to close the funding gap.

To assist citizens in overcoming the stress of the winter, the Mongolian government also released the initial payments from the country's mining-revenue-based Human Development Fund (HDF) - 70,000 tugriks (about $48) to each child and pensioner - in mid-February. The payments are not disaster relief, but were promised during the country's last elections; distribution was pushed forward to give families extra spending money during this time of trouble, said Batbayar, the administrative director of Hovd province. Like most Mongolians Batbayar uses only one name.

In Hovd Province's Bulgan District, where snow still lays a meter and a half (about four feet) deep in the second week of March, many herders spent their families' overall HDF payments on animal fodder. Apart from the HDF money, Bulgan's herders have received at most a few sacks of feed, much of it donated by Hovd businesses.

"We are trying to reach places, but some areas, of course, are difficult to reach, like Hovd," said Altangerel, the head of foreign relations for the National Emergency Management Agency.

Balkhan, a Bulgan herder with only a dozen animals left from a herd that once numbered 90, spent all of the family's HDF money on animal feed, and received another three sacks of fodder from local councils and businesses. He laughed when asked if the aid was sufficient to stem his personal crisis. "It wasn't enough," he said, throwing the remaining sack onto the floor. One sack held enough to fill a couple of cereal bowls.

With only a 10th grade education, Balkhan doesn't know how he will be able to support his four young boys. He has looked for work in the Bulgan District center, but job opportunities are scarce in the village of 3,000.

As he speaks inside his small wood and mud plaster home one recent afternoon, Balkhan's breath rushed out in fits of steam. "This year we need everything: clothes, heating, food," he said. "Because of ? the bad weather, the children catch colds, and sometimes they have fevers. We don't have enough firewood. I hope spring is near."