Mongolia Jockeys to Save the Bactrian Camel 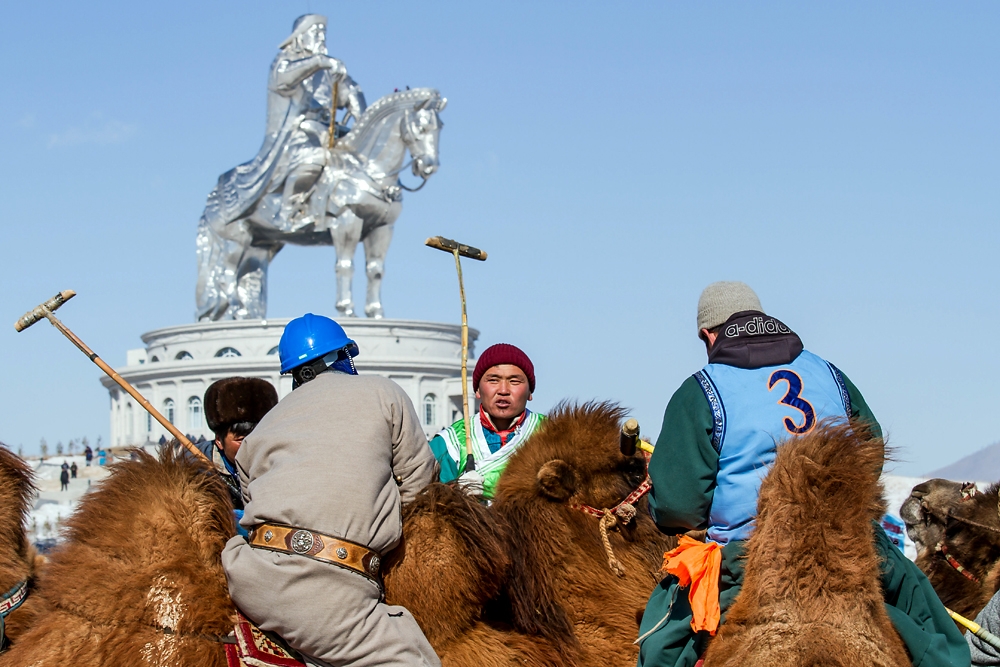 The lumbering and stubborn Bactrian camel might not be an obvious contender in a polo match, but a Mongolian initiative to save the two-humped beasts is taking a traditional sport of the steppes and giving it a new twist.

Historical accounts abound of Mongolia’s larger-than-life conqueror, Genghis Khan, encouraging horseback polo matches to entertain and train his troops. The game, many Mongolians feel, is as prominent a part of their nation’s history as the feared Khan himself. But using domesticated Bactrian camels in the sport is something new entirely—an effort, say organizers of a March 9 polo tournament, to promote breeding the even-toed ungulate.

Oyunbaatar Tserendash, a member of parliament, started the Mongolian Camel Polo Federation in 2002. His son, federation director Temujiin Oyunbaatar, says his father founded the club to combine his love for camels and for polo (an elite sport in Mongolia these days), while in the process building a distinctly Mongolian brand.

“We would like camel polo to have the same world recognition as our Naadam horse races,” Oyunbaatar says, referring to the annual summer festival that celebrates the traditional “three manly sports” of horse racing, wrestling and archery.

Organizers of the tournament, held near Ulaanbaatar, selected 120 camels from Mongolia’s southern Gobi Desert provinces to compete. Herders hawking camel products – such as khoormog, fermented camel milk – and a beauty pageant were also part of the event, organized by Oyunbaatar’s federation with support from the Ministry for Culture, Sports, and Tourism and private companies.

“We are all trying to bring more publicity to the Mongolian camel to encourage herders to continue breeding camels,” says Oyunbaatar.

Domesticated Bactrian camels have long been integral to nomadic life in the Gobi Desert. But their numbers have plummeted in recent generations as their commercial value declined and herders became less motivated to breed them. Between 2000 and 2004, numbers dropped over 20 percent, from 322,900 to 256,600 head, according to figures from the National Statistical Office of Mongolia (NSO). By comparison, there were 895,000 domestic Bactrian camels in 1954. (The International Union for Conservation of Nature lists the wild Bactrian camel, Camelus ferus, as “critically endangered.”)

“There was no market for camel products and many herders started breeding more goats because cashmere was more profitable [than camel wool],” explains Erdenejargal Davadorj, a camel herder from Umnugobi Province selling camel dairy products, including a desiccated curd called aruul, and khoormog, at the tournament.

Camel numbers in recent years have slowly risen, thanks to efforts by non-profits and the government to promote sales of dairy products and wool. In 2012, the NSO recorded a total population of 305,800. The overall population remains small compared to other livestock like goats and sheep, however. The NSO estimates Mongolia has 17.6 million goats.

At the tournament, herders seemed happy for a chance to promote and display their prized camels close to the capital. Making the trek was challenging but worth it, says Ganzorig, who drove 700 kilometers from Dornogobi Province with 40 camels and several other participants in a fleet of trucks.

The camels themselves seemed the only ones distressed by the affair, bucking and spitting as riders struggled to control them using harnesses fastened with forked, wooden nose pegs. The animals grew especially annoyed when players’ thick wooden mallets thumped their shins. Organizers say the camels are specially trained to race and are accustomed to competing, but animal welfare advocates might cringe at the sight.

In its eleventh year, the camel polo tournament is still a relatively quiet affair, attended by just a few hundred people each winter. But those residents of the capital who turned up at the privately owned Genghis Khan Complex 54 kilometers east of Ulaanbaatar seemed happy to make the excursion.

“Young [urban] people often forget the countryside life, so it is a good thing to bring this so close to the city. It’s really nice to see some of the most beautiful camels here,” says 70-year-old Tsegmid Bayantsagaan, a retired coal miner.