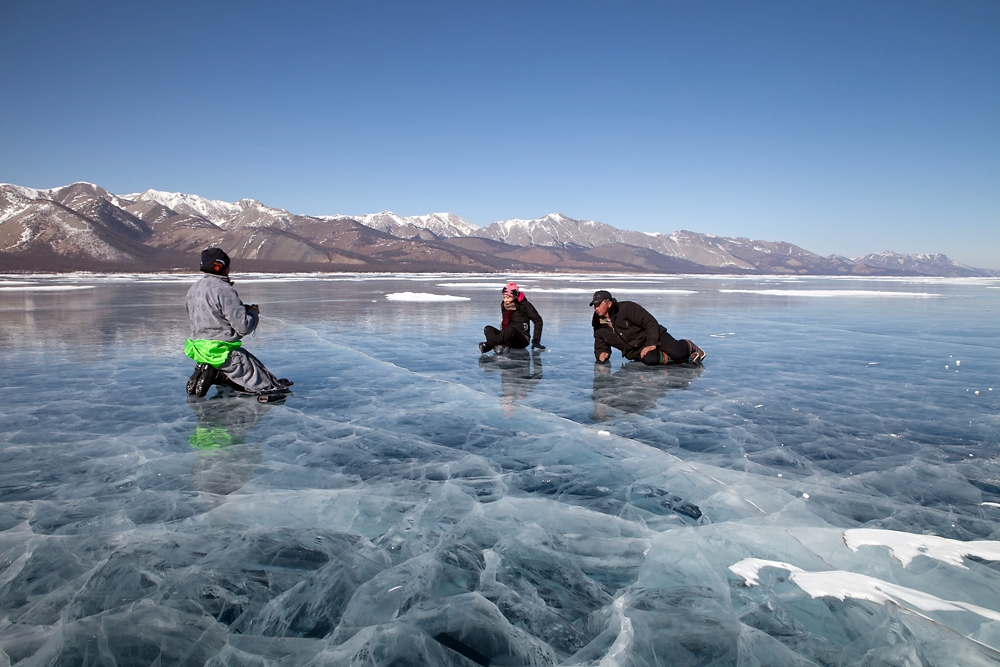 A guide takes visitors in March 2012 onto the frozen surface of Lake Kovsgol, where an annual ice festival and dogsledding tours are winter's biggest draws. Tourist season in Mongolia typically runs from May to September, but tour operators want to draw more visitors year round. (Photo: Pearly Jacob)

Mongolia’s sweeping steppe and nomadic heritage attract tens of thousands of tourists from around the world each summer. Come winter, though, popular tourist spots are eerily deserted; tour operators have traditionally hibernated. But some are starting to ask: ‘are we missing an opportunity?’

Tourist season in Mongolia typically lasts from mid-May to mid-September. Most operators rely on revenue generated during these months to survive for the rest of the year. “No matter how successful you are in summer, winter is a dead season,” said Gereltuv Dashdoorov, director of operations at Nomadic Expeditions, a tour agency. “That’s the same story for most companies.”

The actual drop in tourist numbers between seasons is hard to calculate as official statistics define a tourist as anyone who enters Mongolia on a tourist visa and stays for a minimum of three days. Dashdoorov says the drop in bookings for most agencies is between 85 and 90 percent. Winter visitors are mostly passengers on the Trans-Siberian Railway on a three-day layover in Ulaanbaatar – the world’s coldest capital – between trains.

The government says it wants to augment Mongolia’s mining-dominated economy. In early March, officials pledged to include tourism as a national investment priority at the Mongolian Economic Forum, an annual event co-sponsored by the government. Tourism contributed 5.7 percent of GDP in 2012, according to data from the World Travel and Tourism Council. The council ranks Mongolia 147th of 184 countries for tourism’s total contribution to GDP.

There are other challenges, besides winter. Mongolia’s tour operators have struggled to compete with the mining industry for trained local staff. And mining-led inflation is making Mongolia an increasingly expensive destination for tourists. But the seasonality of the sector continues to limit growth.

“If we want to try sustainable tourism, we need to have income coming in during all four seasons,” said Khoshartsaga Saraal, the new head of the Department of Tourism Policy Implementation and Coordination at the Ministry of Sports, Culture and Tourism.

To supplement their winter income, some tour operators have started catering to well-off Mongolians wishing to travel abroad in the colder months. “Shopping trips in Spain, beach visits in Thailand. … That’s how tour operators are starting to make money in winter,” said Dashdoorov of Nomadic Expeditions.

Dashdoorov feels Mongolia’s extreme winter temperatures are not the only thing deterring potential visitors. “There’s also a lack of winter tourism products you can offer,” he said.

A handful of companies have been trying to extend the tourist season by collaborating with local communities to organize annual events. In recent years, these have included the Golden Eagle Festival in the western Altai Mountains each October. March events include the Khovsgol Ice Festival, the Thousand Camels Festival in the southern Gobi Desert, and a camel polo tournament near Ulaanbaatar. The festivals have yet to draw high numbers of international tourists, though some have gained a reputation as colorful local affairs, says Dashdoorov, whose company helped kick-start the eagle and camel events.

For organizers, poor infrastructure proves as challenging as the weather. “People come prepared to face the cold. But when you include bad roads and rough travel conditions, it becomes more difficult,” said Enkhbaatar Batbayar, general manger of Active Adventures and Tours, co-organizers of the Khovsgol Ice Festival.

In its 13th year, the festival has evolved from a small rural event to an affair attended by dozens of foreigners and hundreds of domestic tourists. Since 2007, Batbayar’s outfit has joined hands with local organizers to promote the festival on a bigger scale; a job, he says, the government could assist. He points to the Harbin International Ice and Snow Sculptor Festival across the border in China as an example of good cooperation between officials and tour operators.

“The Chinese local government arranges everything from sculptures to accommodation. The tour agent’s job there is to simply bring the tourists. Until recently we had to organize everything and also try to sell our tours,” he says. This year, 35 foreign tourists booked tour packages for the ice festival directly through the company, a record.

The central government has pledged greater support for the festivals and recognizes their potential to draw visitors. “These can become internationally known events,” Saraal from the Ministry of Sports, Culture and Tourism told EurasiaNet.org.

One unusual sport shows Mongolia could be a hot destination for extreme outdoor winter sports. Joel Rauzy, a French outdoor guide and musher, started offering dogsledding tours in 2003 through his company, Wind of Mongolia. The five-to-nine-day specialized trips are so popular Rauzy says he often has to turn away prospective clients.

Mongolia should work at developing specialized outdoor services tailored for the winter sports market, he said. “You could organize cross-country skiing tours, pull-cart treks across ice, guided snow treks. […] The clients do exist. There is big potential. The problem is how to manage this potential.”