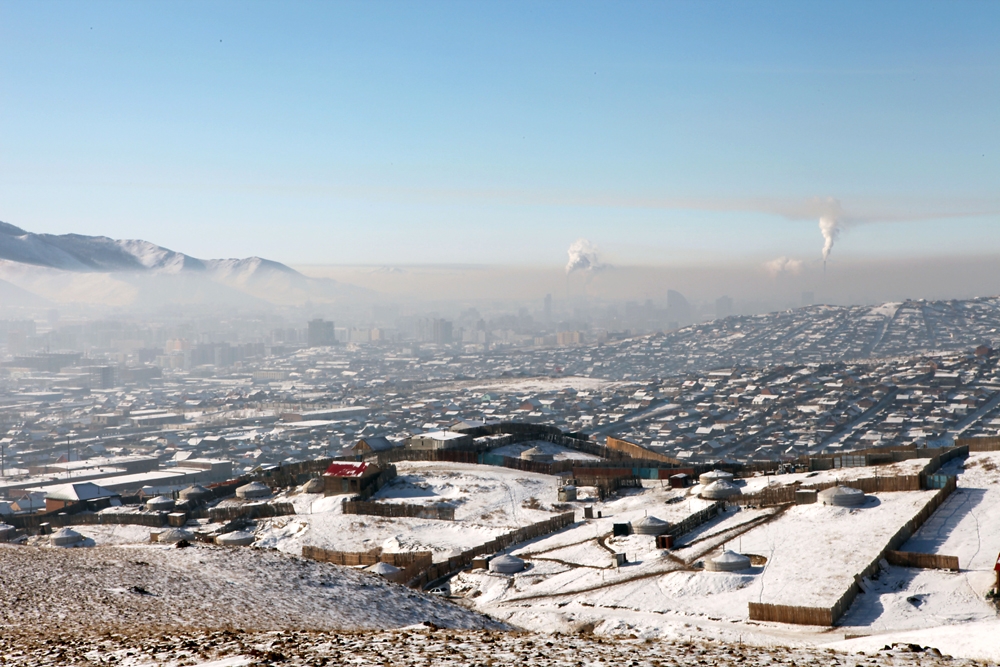 In winter, more than 70 percent of Ulaanbaatar's population, living in the vast unplanned 'ger districts,' rely on raw coal for heating, cloaking the city skyline in a perpetual cloak of smog. In 2011, the World Health Organization (WHO) ranked Mongolia’s capital the world’s second most polluted city, after the Iranian city of Ahwaz. (Photo: Pearly Jacob)

Foreign donors and the Mongolian government are pumping millions of dollars into cleaning up Ulaanbaatar’s smoggy winter air, which the US Embassy calls one of Mongolia’s most critical environmental concerns. But as yet another relief project draws to a close, the city has little to show but more stubborn gray haze.

In 2011, the World Health Organization (WHO) ranked Mongolia’s capital the world’s second most polluted city, after the Iranian city of Ahwaz, based on airborne levels of particulate matter that settles into the lungs and other vital organs. In winter, particulate matter concentrations can reach levels 50 to 60 times higher than recommended WHO standards.

The reason is coal. More than 70 percent of Ulaanbaatar’s residents live in unplanned settlements called ger districts – named for the traditional felt tents many live in, known elsewhere as yurts – and rely on coal-fired domestic stoves for heat. In December 2011, the World Bank said that 90 percent of winter emissions in the city came from domestic stoves and that air pollution was responsible for 27 percent of all deaths in the capital. The study proposed distributing low-emission stoves to help clean up the air.

Foreign aid agencies began researching low-emission stoves as early as 2008. But the costs were still prohibitive for most poor families. So when the Millennium Challenge Corporation (MCC), an American government aid agency, announced a $47 million grant to help clean up Ulaanbaatar’s air in 2010, a bulk of it was spent subsidizing low-emission coal stoves for mass distribution.

MCC financed 70 percent of the project and the Mongolian government chipped in another 20 percent, reducing the cost of the cheapest stove models to about $20, a tenth of their original price.

MCC officials estimate that close to 100,000 stoves had been distributed by the time the project wrapped up in December. But ongoing migration into the city of 1.3 million means the target is always moving. “More and more people are coming to Ulaanbaatar each day with their traditional coal-fired stoves,” says Courtenay Engelke, implementation director for the MCC project. MCC estimates that over 40,000 new ger households have moved into Ulaanbaatar since the project started.

Whether the project was effective is disputed. The National Air Quality Monitoring Agency, a government body, claimed a 20 percent reduction in particulate matter in one year, though meteorological conditions may have influenced the results. “This year was very windy and we had a lot of snow so this might have contributed to the reduced figures, but the result is still positive,” says Nyamdavaa Shagdar, an agency representative.

But with the city perpetually cloaked in thick smog, many residents are skeptical.

“The new stoves are working very well. There is less smoke and they heat well. […] But it’s difficult to see the difference with our eyes because the pollution is still very bad,” says Begzsuren Jamsranjav, a ger dweller.

Researchers feel a 20 percent reduction is little reason to celebrate given the gravity of the situation. “Detailed research has shown that there is no attributable health benefit until air pollution is reduced by at least 50 percent, so this figure means nothing for public health,” says Enkhjargal Gombojav, a researcher at the Health Sciences University of Mongolia.

MCC officials anticipated that the stoves could reduce pollution by approximately 20 to 30 percent. “We never believed stoves would solve this problem 100 percent,” says MCC’s Engelke. She hopes MCC’s focus on the stoves would “free up resources within the donor community and the government to focus on other aspects” of the problem.

In a bid to introduce alternate low-emission fuels into the market, authorities recently budgeted $300 million to build a plant to produce semi-coke – a processed form of raw coal that burns cleaner – to replace coal in homes. But experts are doubtful the semi-coke will be suitable for small stoves, as it is harder to ignite and burns hotter.

Ger dwellers like Jamsranjav say they would prefer electric heating. But Ulaanbaatar’s crumbling Soviet-era power plants are badly overstretched. Construction of a new coal-fired power plant was to start in 2012, but has since been indefinitely postponed.

Meanwhile, government officials insist that they are serious about tackling air pollution, but admit that some of the root causes are being ignored.

“We need to understand why people are migrating to the capital. If we don’t improve the life and infrastructure in the countryside, this [pollution] will continue,” Myagmar Ravdan, head of the National Committee for Air Pollution Reduction, a government task force, told EurasiaNet.org.