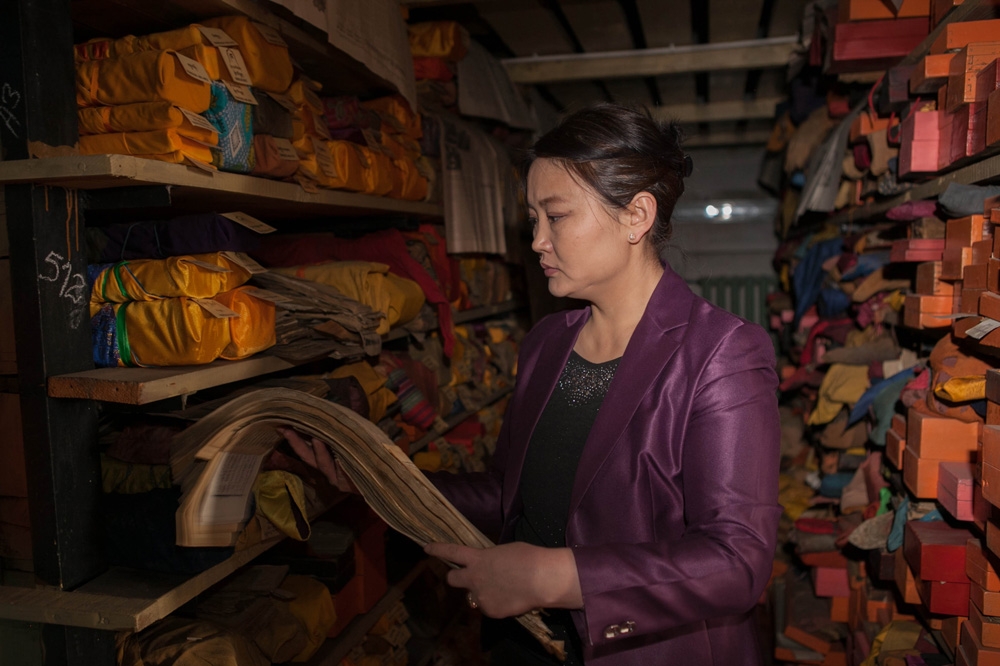 A staff worker shows off some of the manuscripts crowding the storage rooms at the National Library of Mongolia. With limited storage space, library staff make best use of available room, minding the fragile state of the documents as best they can. (Photo: Pearly Jacob)

Scholars believe it to be the world’s largest treasury of ancient Buddhist texts. The sheer immensity of the collection held in the National Library of Mongolia has prevented a proper tally to date.

The National Library, located in a stout Soviet-era neoclassical building in downtown Ulaanbaatar, is estimated to contain over a million scholarly and religious Buddhist works. Besides original works from Mongolia, the library has rare copies of the early Tibetan Buddhist canon—sacred contemporary records of the Buddha’s oral teachings, called the Kangyur, and commentaries and treatises on the teachings of the Buddha, the Tengyur.

Many original Tibetan texts were lost or destroyed amid the Chinese invasion of Tibet in 1950. Thanks to centuries of contact with Tibet, however, Mongolia is believed to have some of the few remaining originals. In addition to ancient Tibetan and Mongolian documents, rare Sanskrit manuscripts, including 800 verses by Nagarjuna, a 2nd-century Indian Buddhist philosopher, inscribed on birch bark, have been identified in the collection.

“This collection is not just a national treasure, but a world treasure. It’s not just about Tibetan or Mongolian history, but a slice of human history,” says the library’s director, Chilaajav Khaidav.

How the texts found their way to the library is as much a source of painful recollection about Mongolia’s communist legacy as it is a celebration of the country’s Buddhist heritage, says Buddhist scholar and former monk Nyamochir Gonchog.

Mongolia’s links with Tibetan Buddhism date back to the 4th century AD. It was a Mongolian ruler that conferred the title of Dalai Lama – Mongolian for ‘Ocean Lama,’ (lama means priest) – to Tibetan spiritual leader Sonam Gyatso in 1587. The title has stuck with successive Tibetan Buddhist leaders, as well as being applied retroactively to previous monks in the lineage.

At the turn of the 20th century, there were over 800 Buddhist centers of learning in Mongolia. Over the centuries, hundreds of thousands of sacred Tibetan texts had been brought into the country for translation into Mongolian or as gifts to monasteries.

The library itself was started with the personal collection of the last Bogd Khan, Mongolia’s spiritual and secular head of state, who died in 1924, three years after the communists came to power. But the charred edges of many texts are reminders of the 1930s communist purges when over 30,000 monks were executed and around 700 monasteries razed to the ground. As news of the destruction spread, faithful Buddhists across Mongolia hid artifacts and salvaged what they could from destroyed monasteries.

Hidden texts started resurfacing by the 1960s. When the Mongolia Academy of Sciences established the Department for Mongolian and Tibetan Studies in 1985, people started donating hidden family collections once they believed the texts would be preserved, recounts Gonchog, the former monk who is also a member of the Academy.

Many texts are in poor condition and housed in less-than-adequate conditions, admits Khaidav, the library director. Space is a constraint and much the collection is stacked haphazardly in the library’s storeroom. Khaidav says the Mongolian government has funded the study and restoration of many of the ancient Mongolian texts. But until recently little was done with the Tibetan texts.

Foreign assistance arrived in 1999, when the Asian Classic Input Project (ACIP), a New York-based non-profit dedicated to preserving and digitizing ancient Tibetan and Sanskrit texts, began cataloguing the library’s contents. But the project progressed fitfully, until stalling in 2008.

Gonchog believes that perceptions of the collection’s monetary value and suspicions among local officials about the reasons for foreign interest have hindered preservation efforts. “People have thought these texts can fetch a lot of money, but the real value is in the contents,” he told EurasiaNet.org. “This is priceless knowledge that has to be understood and preserved.”

ACIP’s work resumed this month with a temporary grant from Hong Kong-based Global Institute For Tomorrow (GIFT), a think-tank, which estimates the whole project will cost $1.1 million.

“The work itself is a very slow and methodical process,” said Ngawang Gyatso, a Tibetan from India who oversees the cataloging project for ACIP. Every single page is carefully studied for type of material used, possible origin, as well as the script and printing style and monastery seal stamp that help determine where and, sometimes, when the text was produced. The titles of the texts are transliterated into the Latin alphabet and details are then entered in a database, Gyatso explained.

Within days of recommencing the project, faulty electric wiring at the library caused a small fire, stalling work again for a few days. ACIP recently updated the hardware, and says that with enough funding it could catalogue the entire collection within three years.

Pearly Jacob is a freelance journalist based in Ulaanbaatar