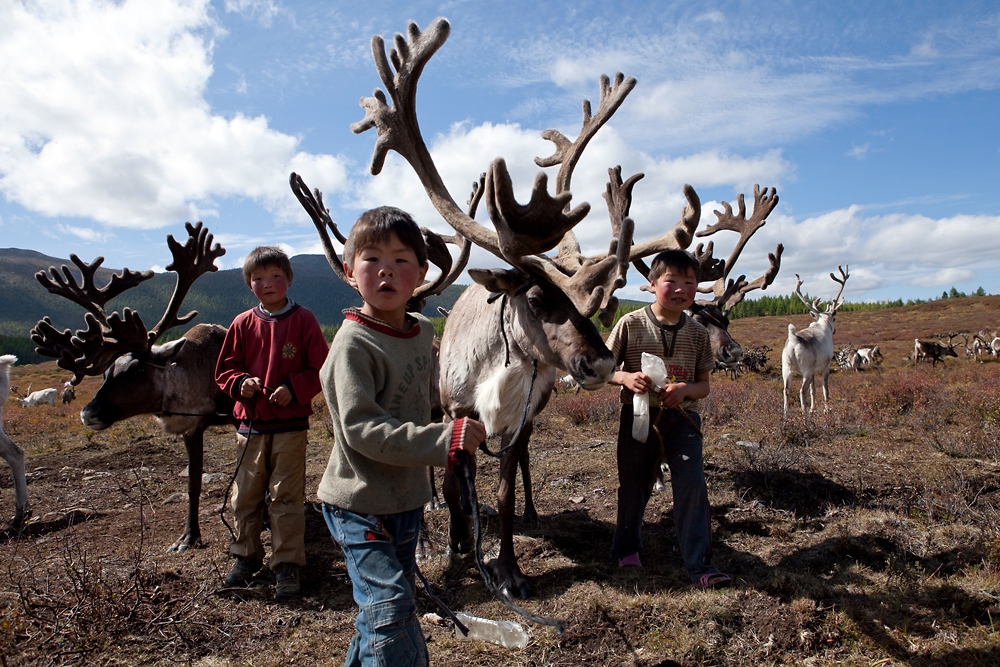 Young boys catch and rope their favorite reindeer to harness up for a ride into the forest. 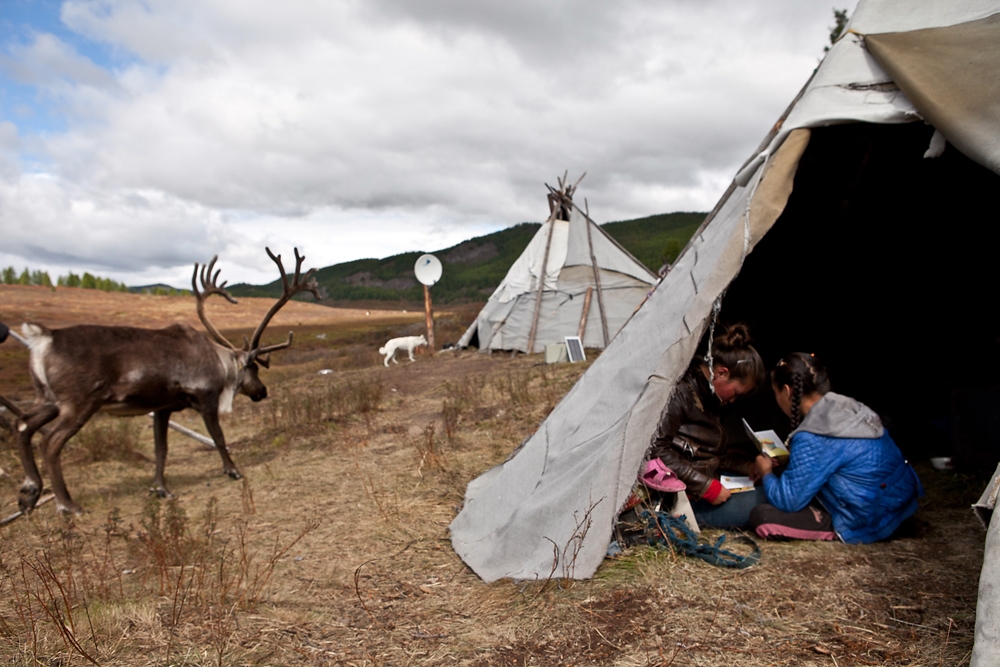 Left free to roam as it pleases, a reindeer walks past young girls reading books given to them as gifts. 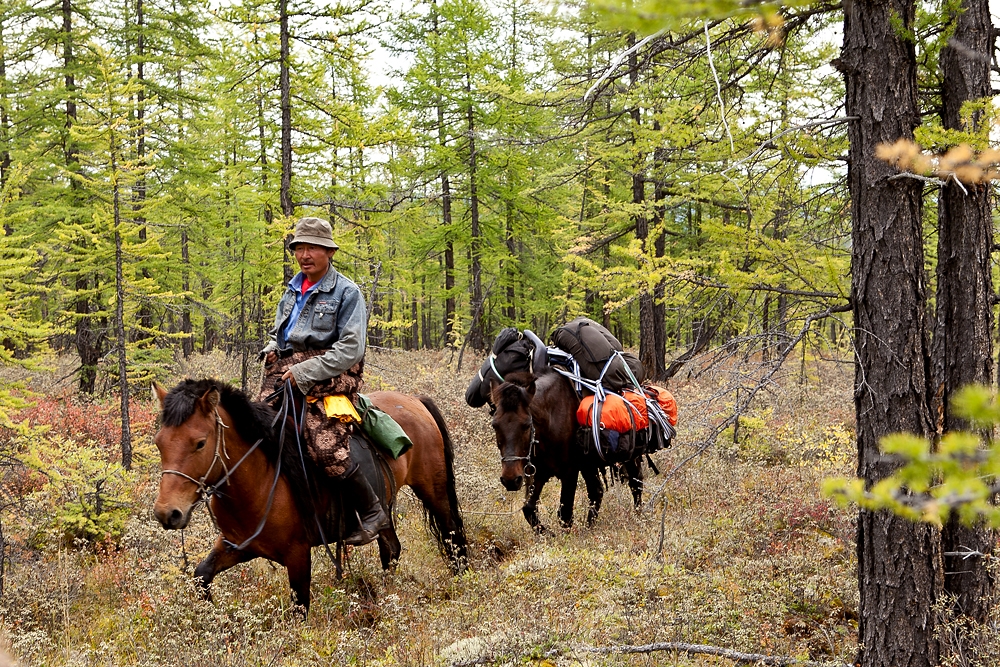 Guide Bayanmunkh leads a packhorse through a forested section of the taiga, which is slushy in summer. 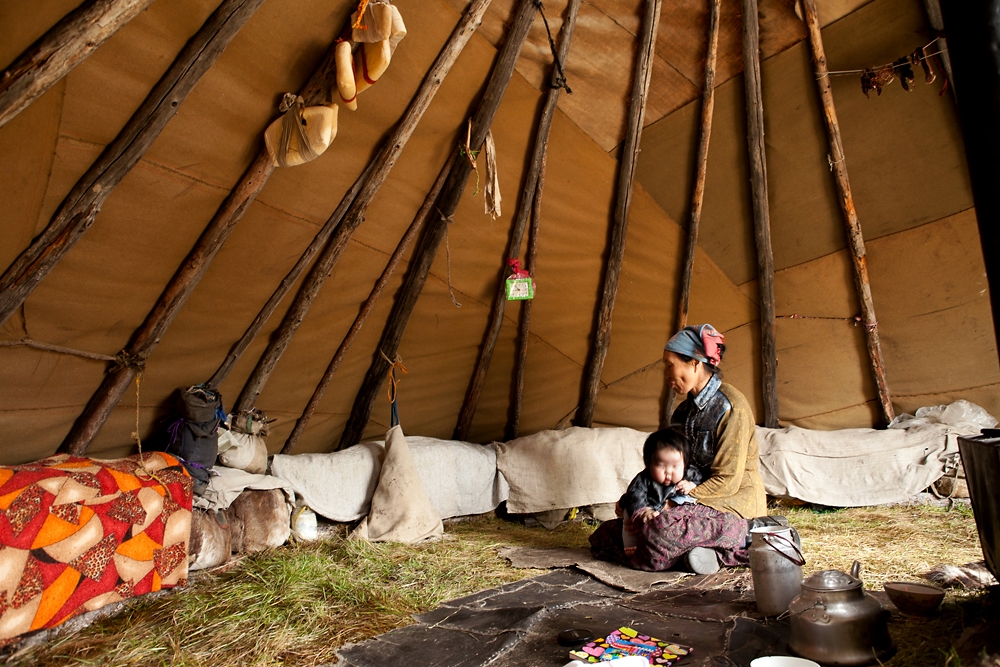 To help to block out cold drafts, personal belongings are tucked away under sheets around the 'ortz.' 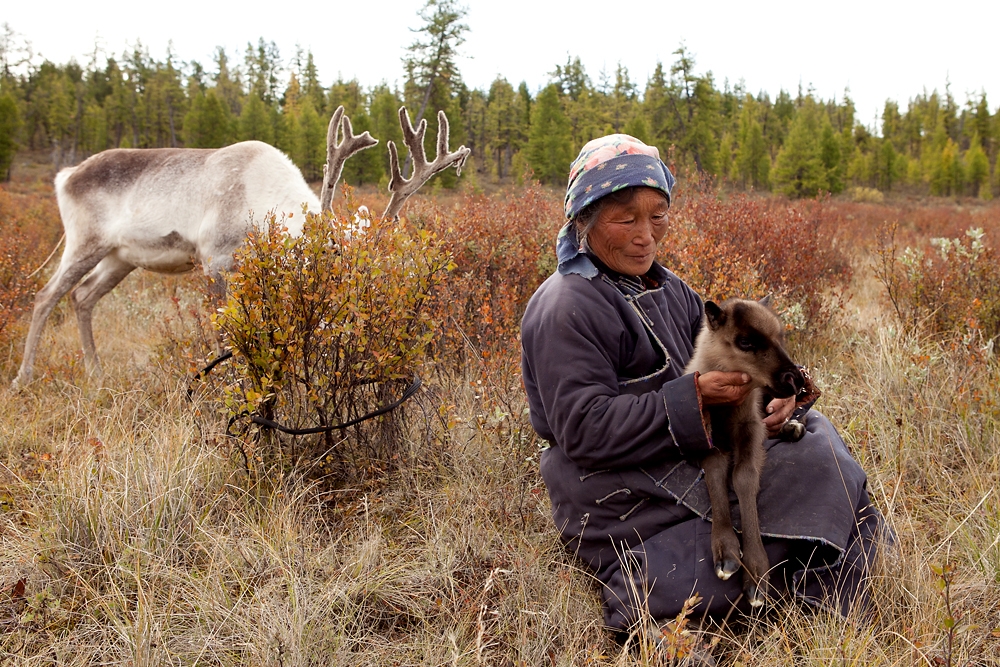 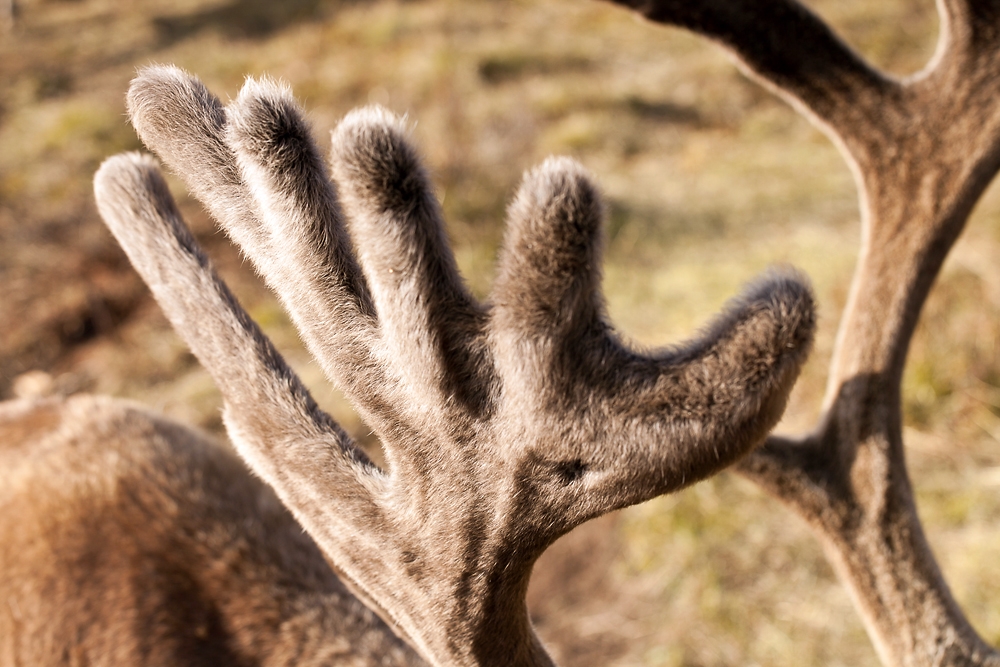 Although velvet antlers are prized on the Chinese medicine market, cutting and selling the live antlers was stopped after 1979. 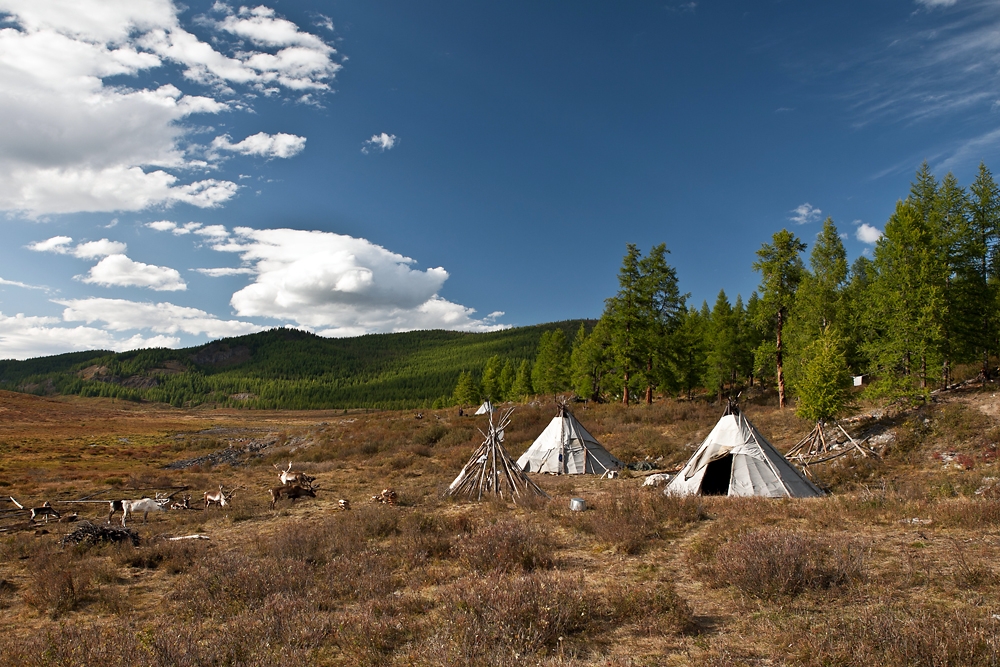 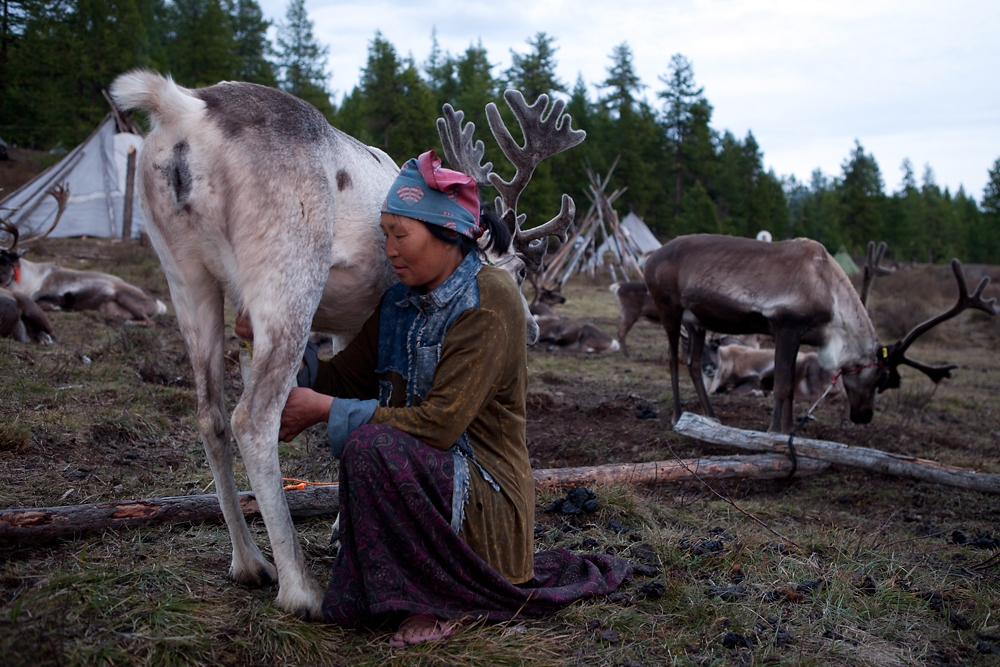 Byunaa milks a reindeer in the evening. A reindeer gives about 200 grams of the rich, fatty milk per day. 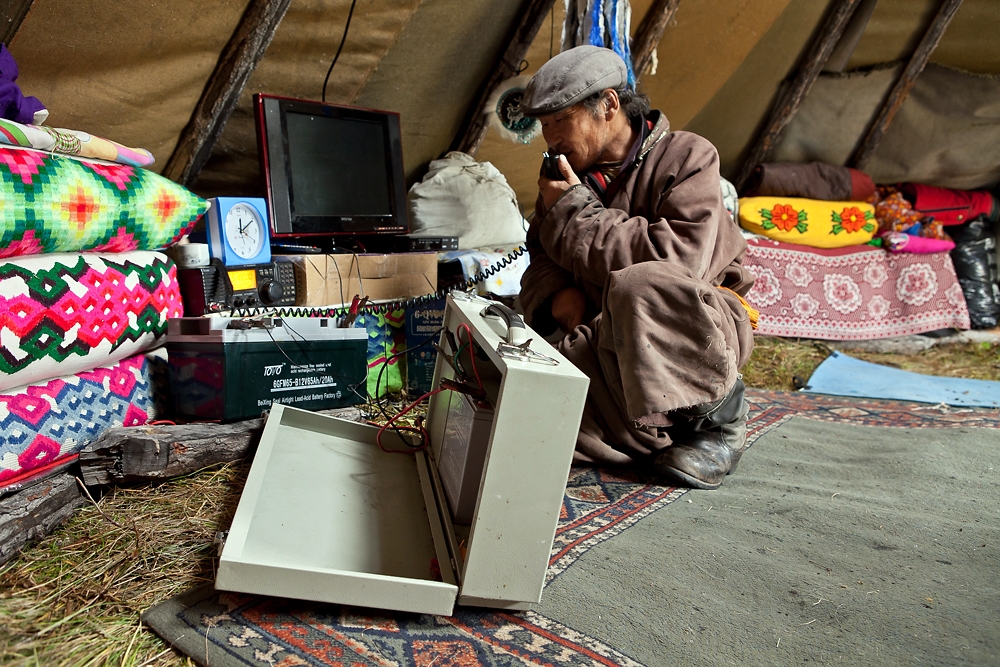 With a radio gifted by aid workers in 2004, Ganbat inquires a town contact about tourists supposed to arrive the next day. 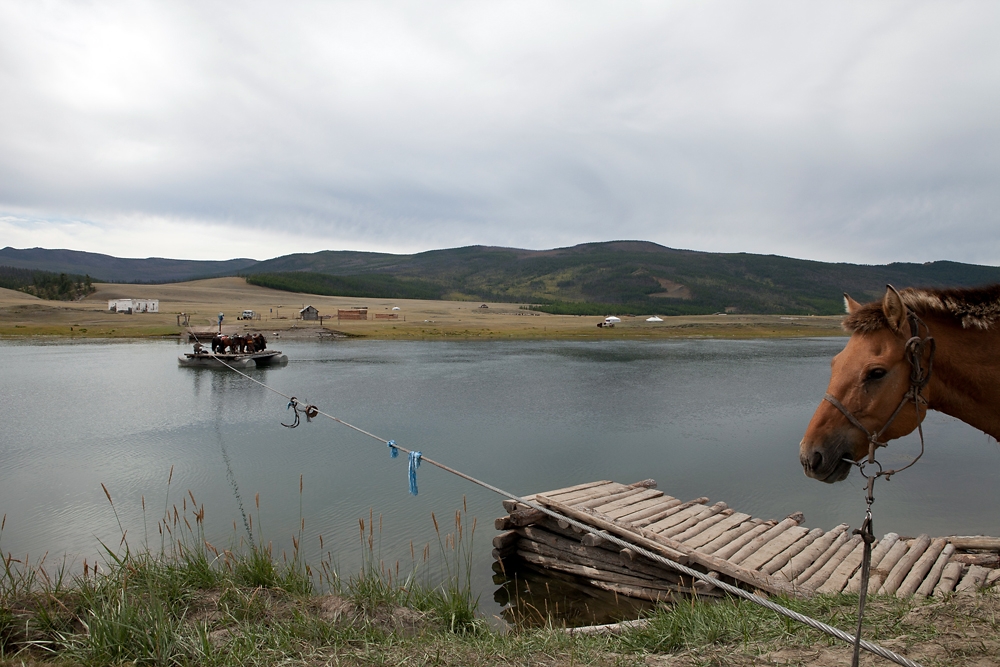 A horse waits its turn to be ferried across a river en route to the east Tsaatan camp. 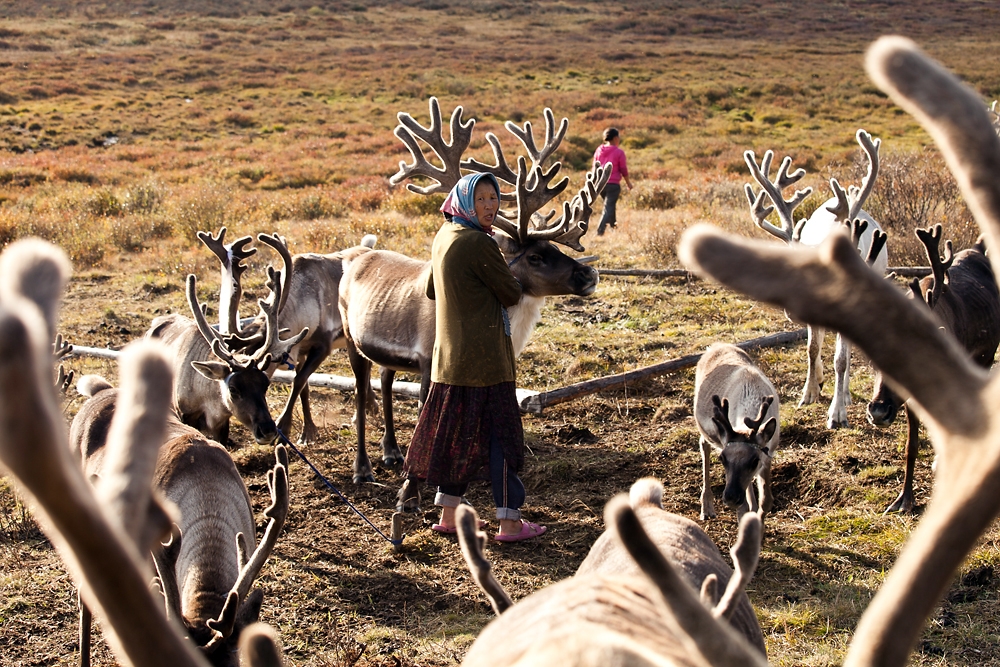 Byunaa calls her younger daughter to help tie up the reindeer as they return to their owners after grazing. 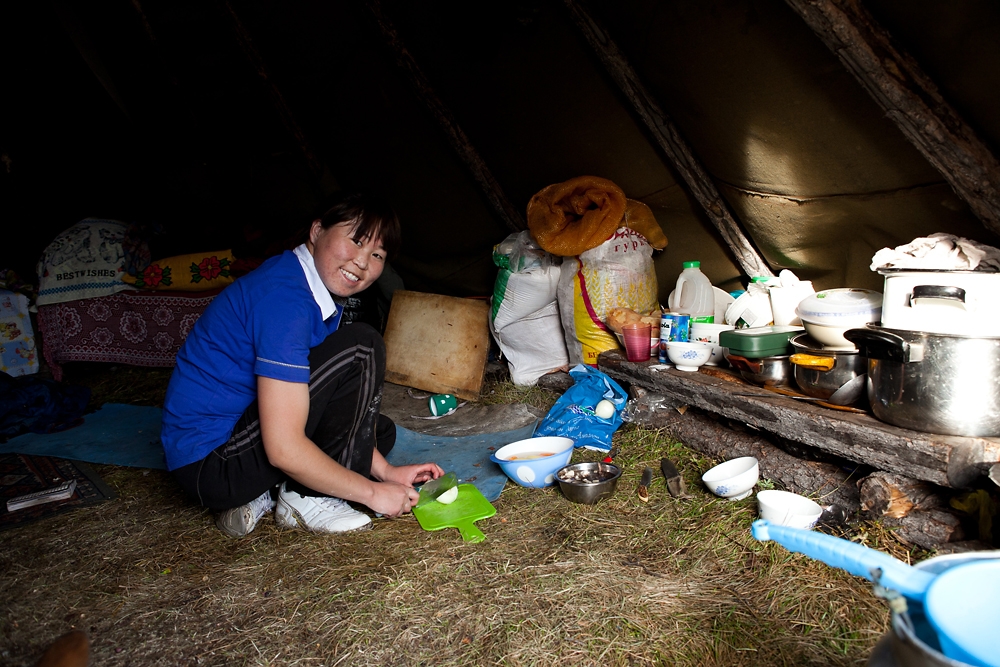 Back home on vacation, Narang will be the first qualified veterinarian among the Tsataan once she completes her studies. 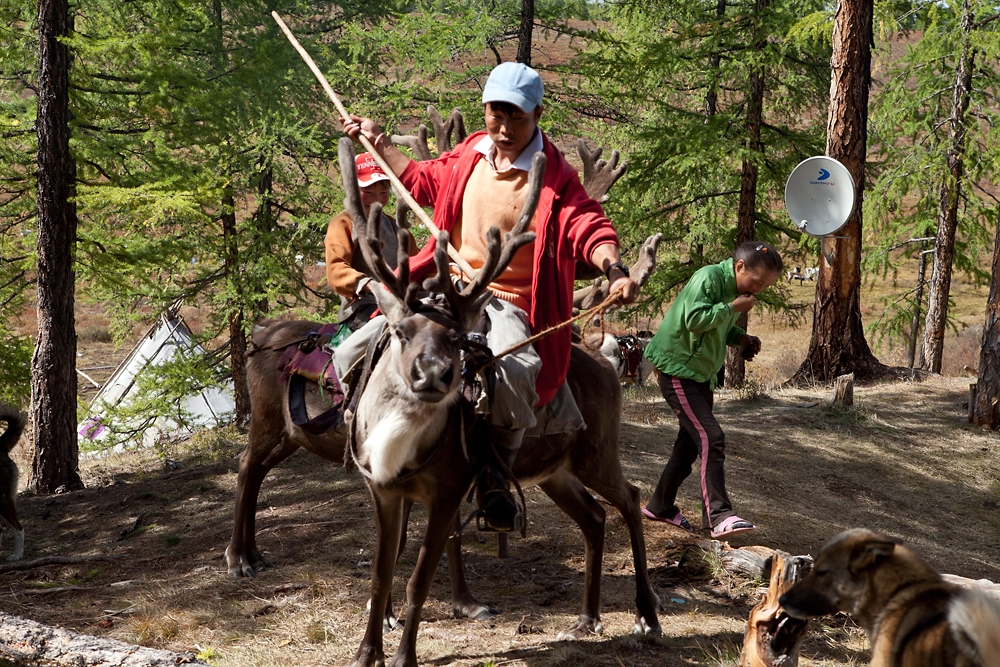 A team of reindeer riders set off to pick pine nuts in the forests. 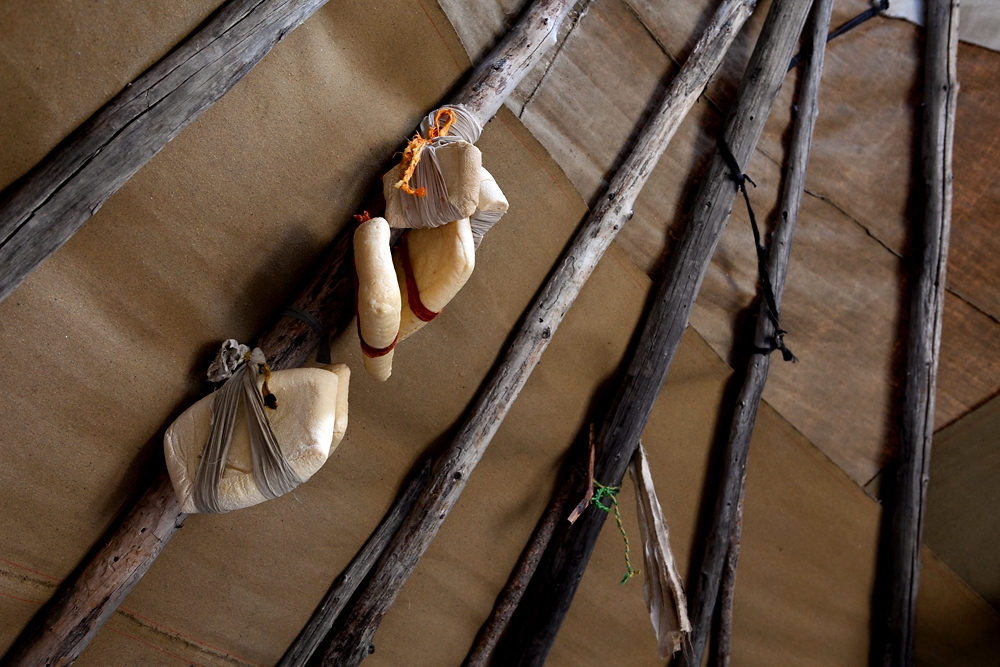 Packed cheeses made of reindeer milk are left to dry on the supporting poles of the 'ortz.' 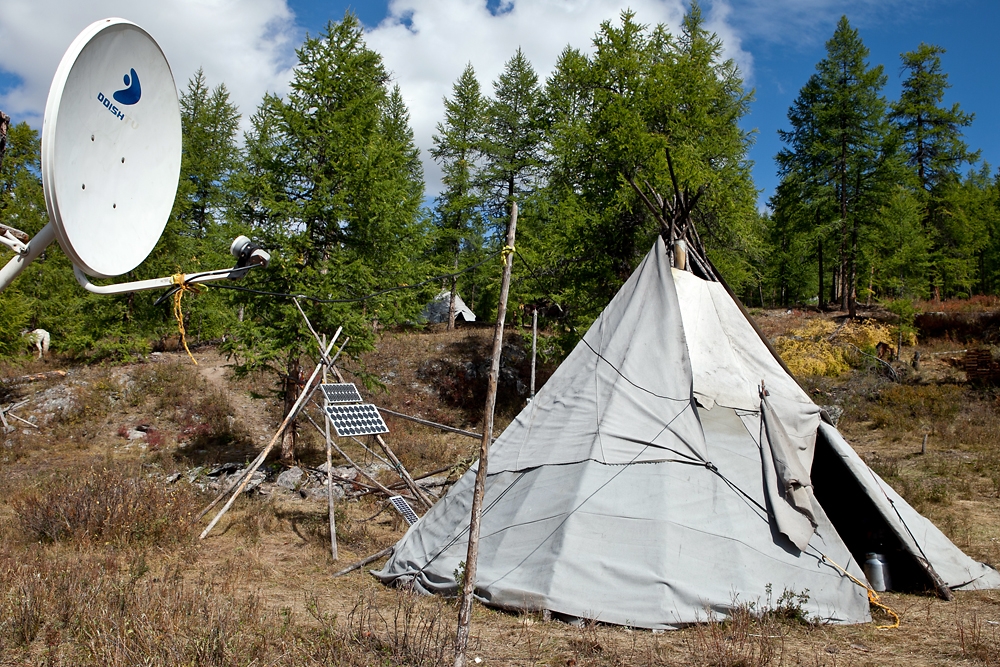 Satellite receivers and solar panels are recent additions to a lifestyle unchanged for centuries. 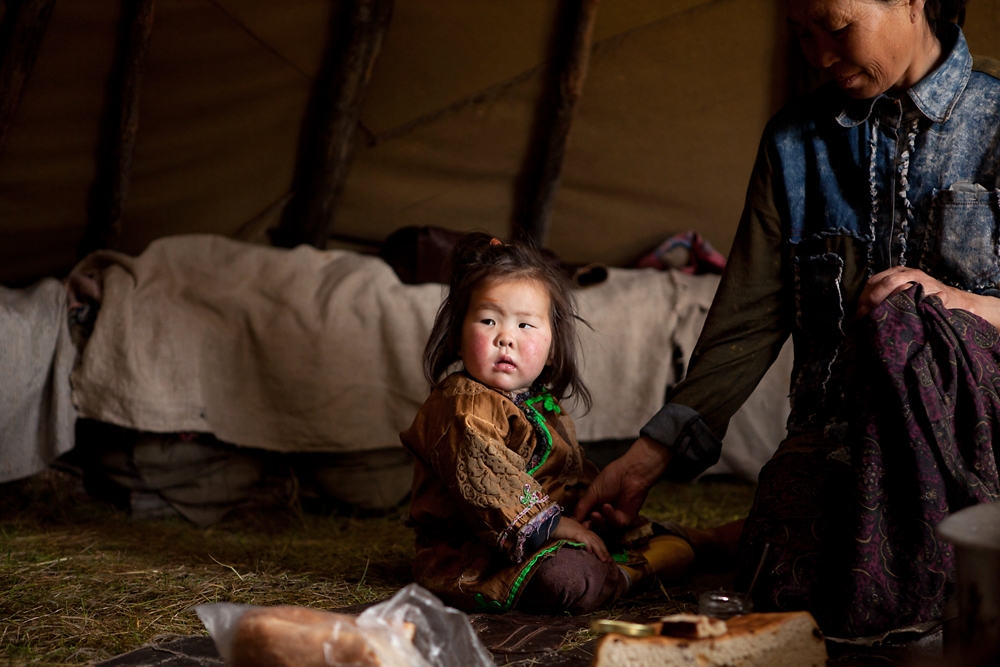 Byunaa's 2-year-old granddaughter trots over for a visit from her parents' 'ortz' next door. 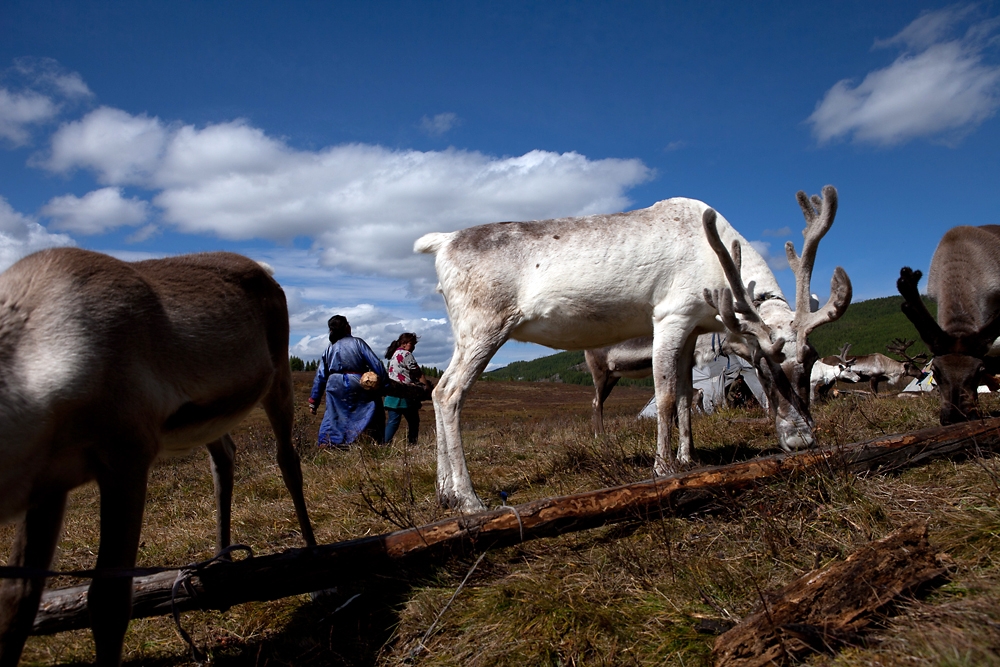 Female reindeer graze at the campsite, where they are left tied up for milking before being let free to forage.
prev
next

It’s late summer and a chill wind blows through a tiny nomad camp in northern Mongolia’s permafrost forest. Reindeer tied up outside the canvas tepees grunt and paw the ground. "It might snow. They can smell it, so they're excited," explains Byunaa before scurrying back inside to tend the stove, essential all year in these parts.

Khovsgol Province along the Siberian border is home to Mongolia’s smallest ethnic group – a community known as the Tsaatan, which translates as “reindeer herder” in Mongolian.

Originally from across the border in what is now Russia’s Tuva Republic, the Tsaatan are one of the last groups of nomadic reindeer herders in the world. But as the reindeer populations shrink, only about 40 families continue the tradition today.

After the Soviet Union strengthened its borders in the 1920s and 1930s, the Tsaatan remained in Mongolia and were officially granted citizenship in 1956. While elders are bilingual, speaking both Mongolian and Tuvan, younger generations increasingly speak only Mongolian. Few people use surnames, instead referring to themselves by first name and the zone within which they migrate, such as Zuun Taigaiin Byunaa, or Byunaa of the East Taiga.

They depend on the reindeer for milk, transportation and basic tools and handicrafts. The animals are rarely eaten. Rather, the Tsaatan ride them to hunt wild elk and boar: the reindeer have adapted to move swiftly across deep snowdrifts in winter.

In the 1970s, Communist Ulaanbaatar halted the nomadic lifestyle, taking reindeer under state care and placing most Tsaatan in fishing and hunting collectives. In 1979, the state began harvesting reindeer antlers to supply the Chinese medicine market. "This was when reindeer numbers first started dropping until there were only about 600 animals," recalls Ganbat, Byunaa's brother.

The state responded with veterinary support and by importing reindeer from Tuva to improve the breeding stock. The measures helped increase the population to above 1,200 by the 1990s. The collapse of Communism and the ensuing economic slump left the state without wages to pay collective workers. So the animals were handed back to the Tsaatan, who, with no work alternatives, gradually drifted back to their former lifestyle.

The breakdown of state-funded veterinary support and loss of traditional herding knowledge took its toll. In 2002, the community again faced a crisis when a mysterious disease rendered male reindeers sterile. Brucellosis, an infection that causes spontaneous abortion, also brought numbers down to around 600. Though foreign donations of medicine and vaccinations helped restore the population again, exact numbers are unknown.

"What they require most here in terms of outside intervention is fresh genetic stock to ensure the continued survival of the reindeer and consequently the culture," says Benedikte Kristensen, a Danish anthropologist who frequently visits the Tsaatan.

Some researchers feel inbreeding is to blame for declining reindeer health, while others cite changing husbandry practices and a less-mobile population. "Some camps don't move as much anymore. So their reindeer have less access to prime feeding areas and are often chronically malnourished,” explains Kirk Olson, a biologist from the University of Massachusetts at Amherst.

Tourism has become an important source of income, especially since Ulaanbaatar introduced strict hunting laws in 2005. "If it wasn't for the tourists, my daughter wouldn’t be in college," says Byunaa, who earns extra income selling handicrafts and hosting tourists.

Young people increasingly leave the taiga to study. With their fortunes tied to constantly shifting reindeer numbers, parents are realistic that some of their children will not return. "As development goes, things change. So if my daughter refuses to return to the taiga, it’s okay...as long as she gets a good job," says Ganbat, whose 21-year-old daughter Narang is finishing her veterinary studies in the capital, more than 1,000 kilometers away. Upon graduation, she will be the first qualified veterinarian from the region, an accomplishment her father hopes will contribute to their reindeers’ health.