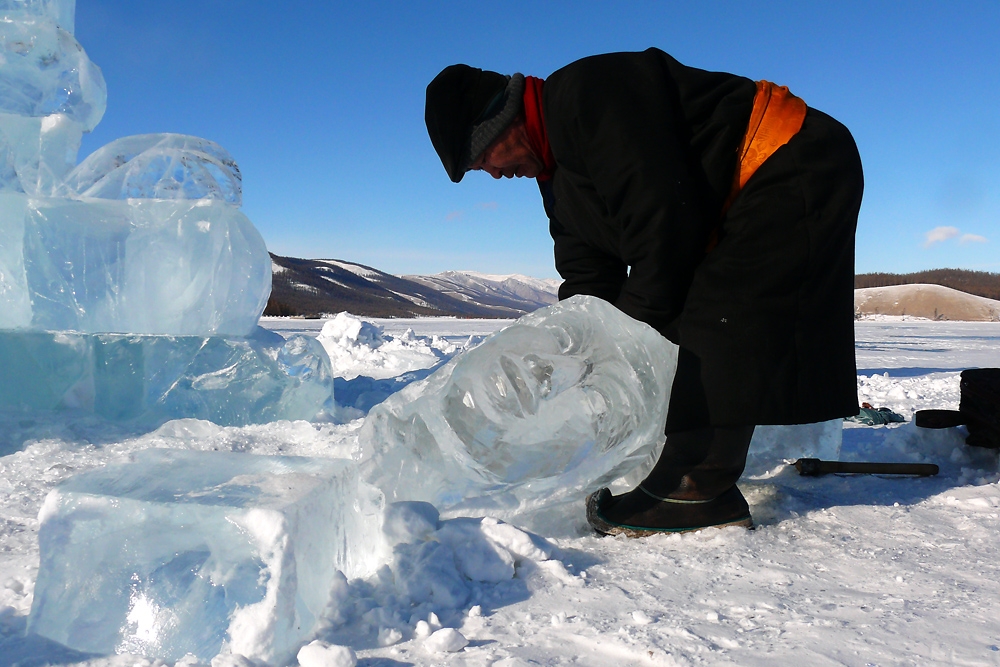 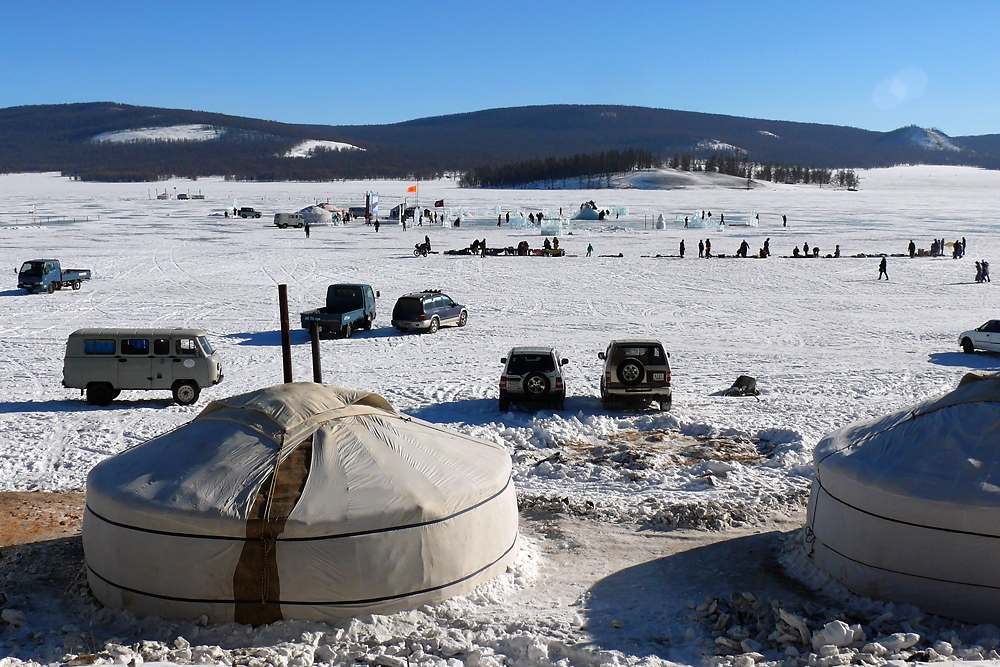 Bitter cold and strong wind had most of the 1,000 people at the festival scurrying to temporary restaurant gers to keep warm. 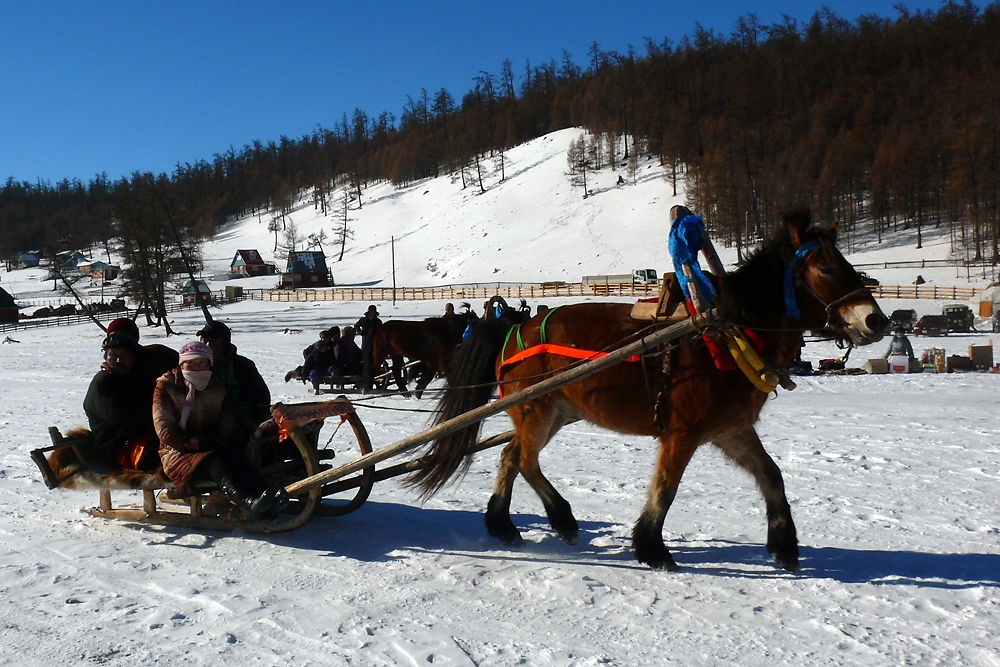 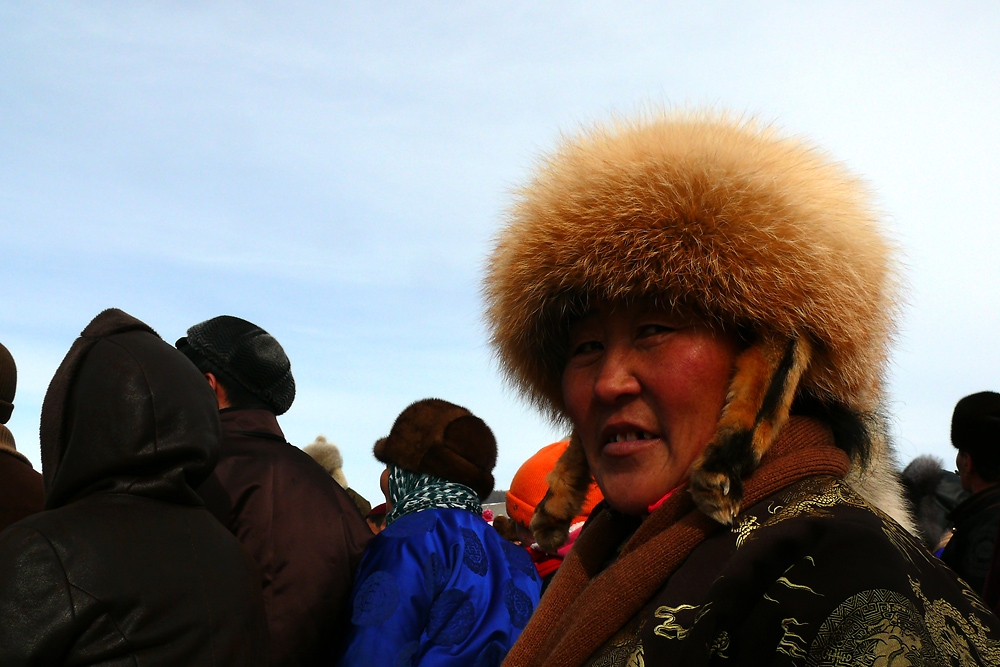 A local visitor sports her fox fur chapka with the legs retained as ear muffs. 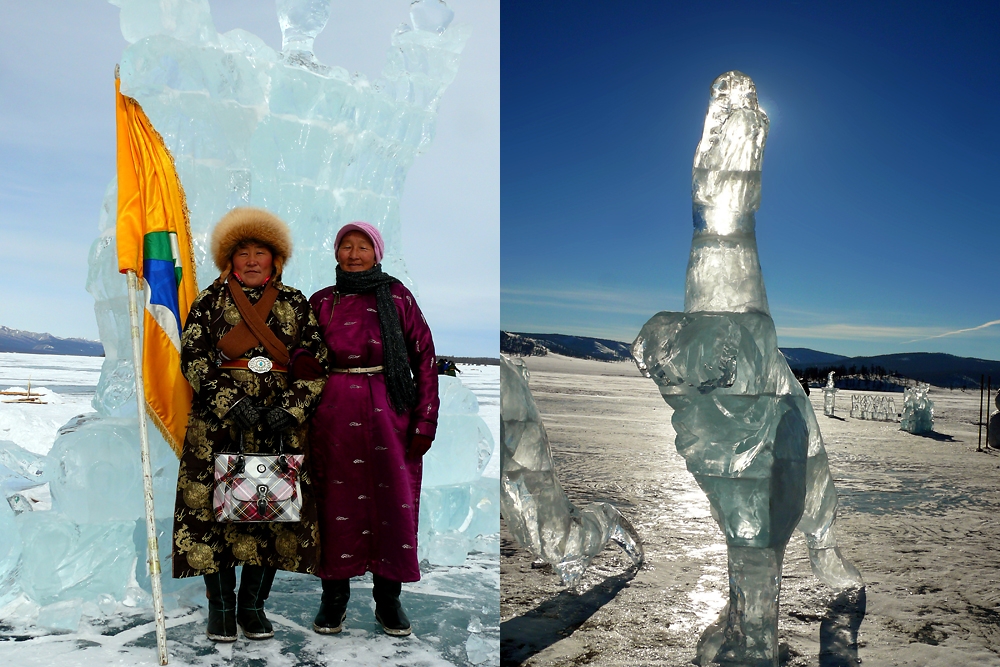 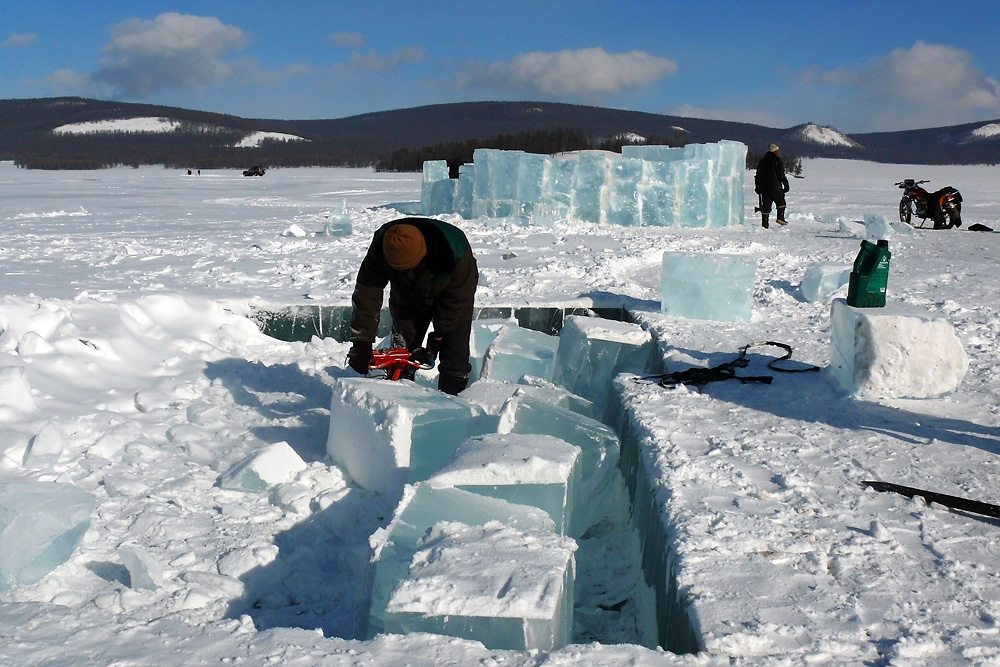 A man uses a chainsaw to cut 1-meter-thick blocks of ice from the surface of Khovsgol Lake to be used by the ice sculptors. 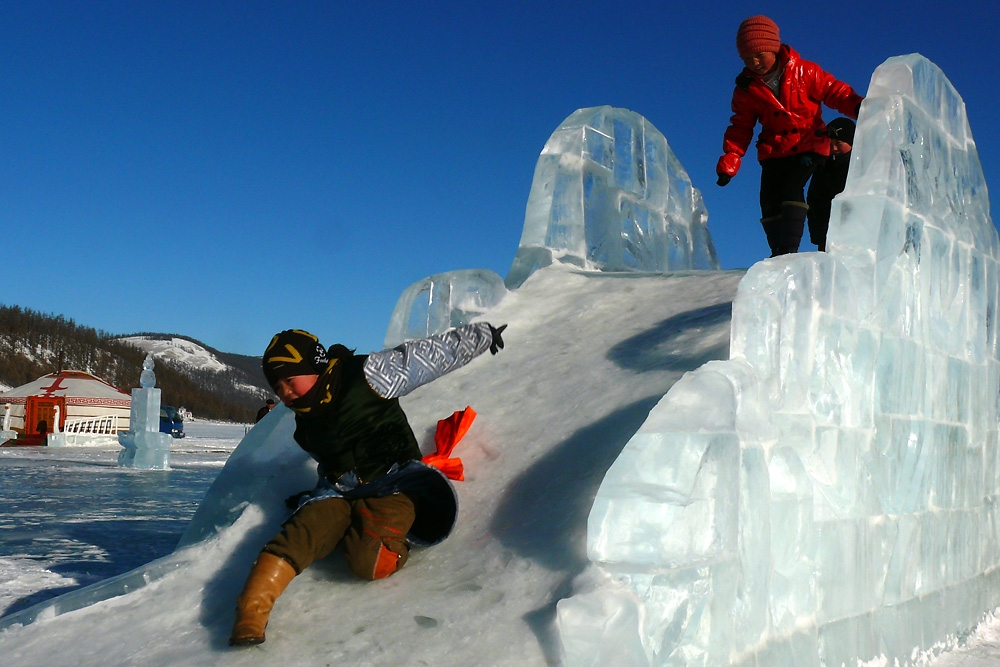 Kids slide down an ice chute, one of the biggest draws at the festival for children and grown ups alike. 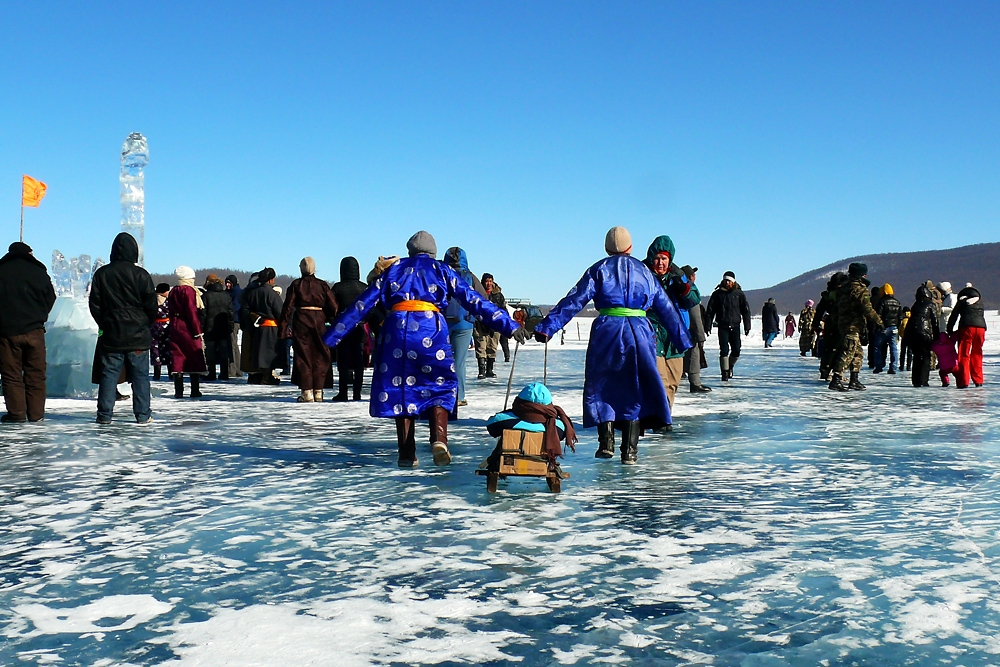 Two women head towards the crowd at the festival tugging along a toddler in a makeshift sledge carriage. 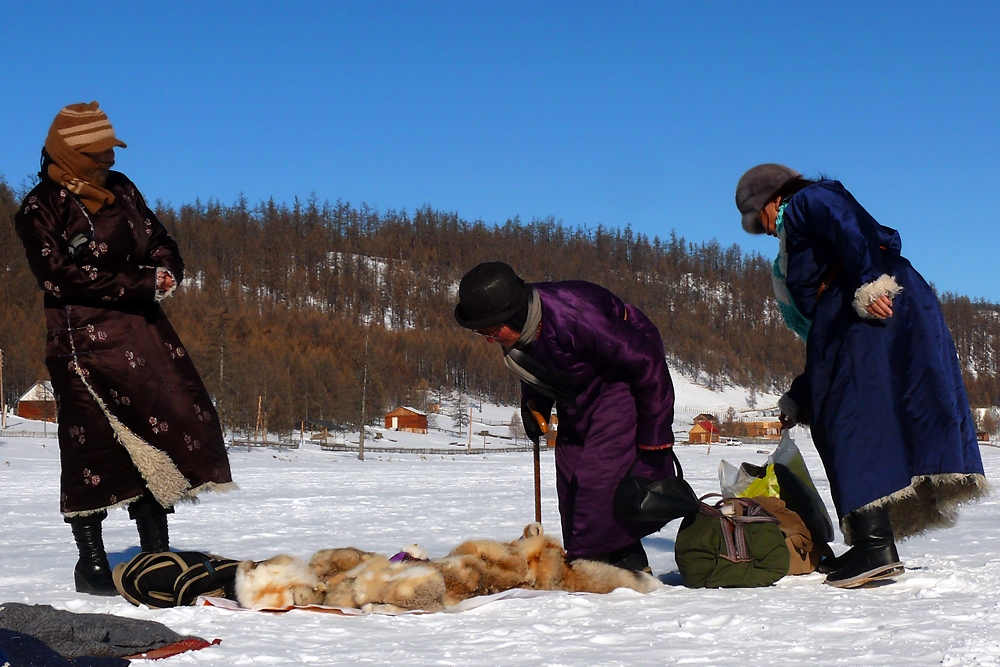 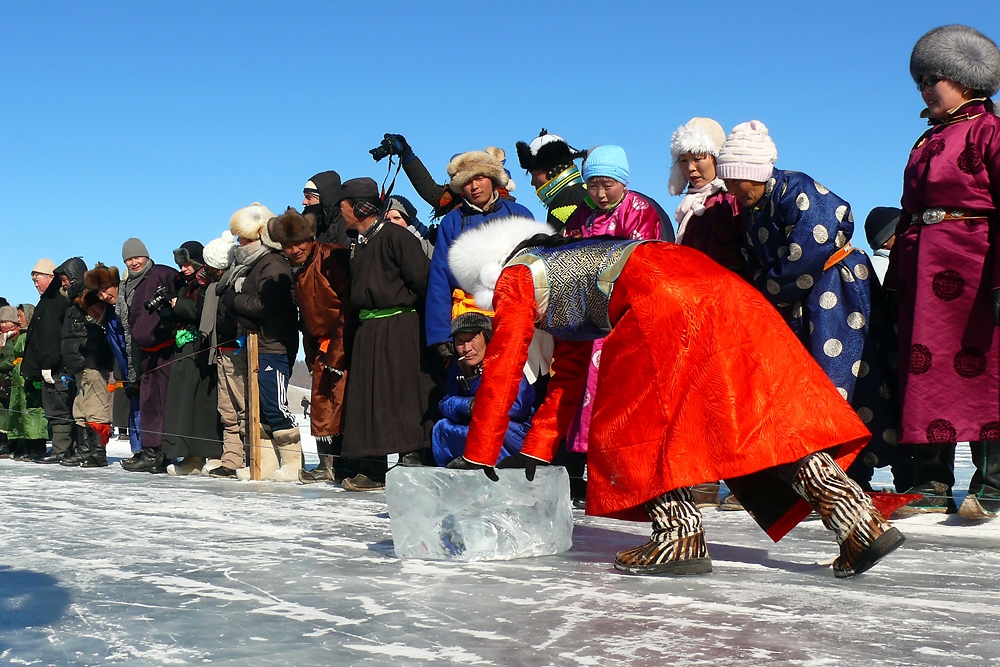 Onlookers cheer a participant in the ice block pushing competition. 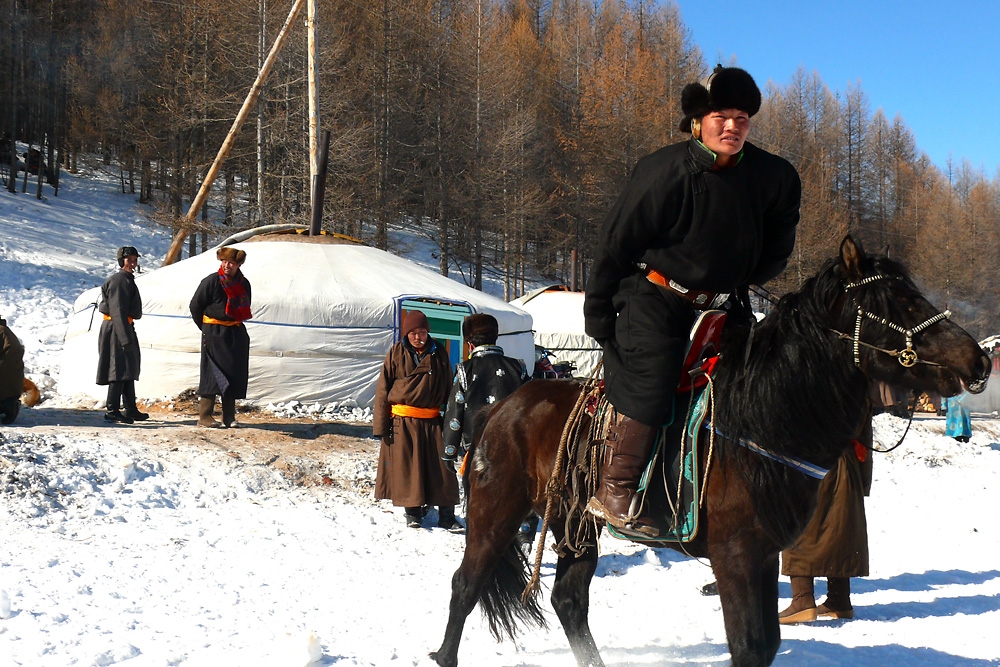 Nomadic herders, camped for winter around the lake, ride horses to attend the festival. 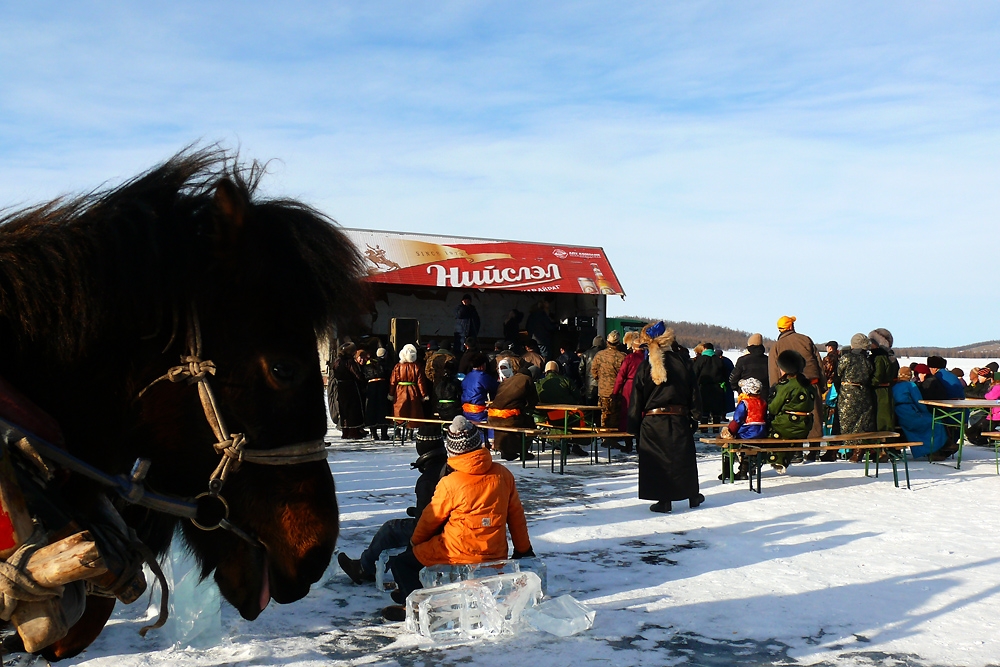 A horse awaits it master as spectators listen to the last song from a singer brought in by beer sponsors. 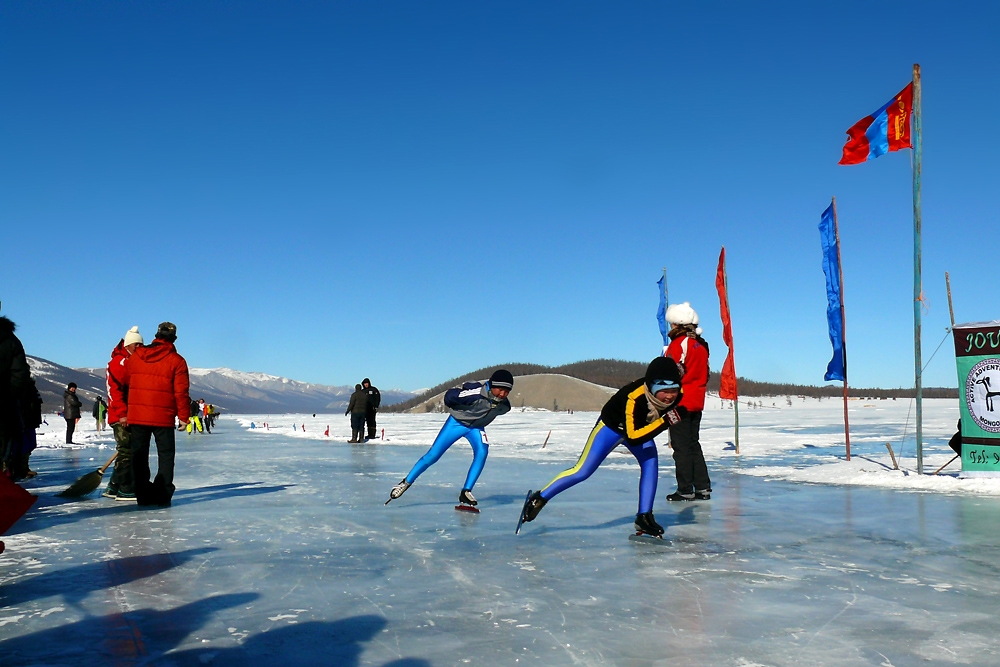 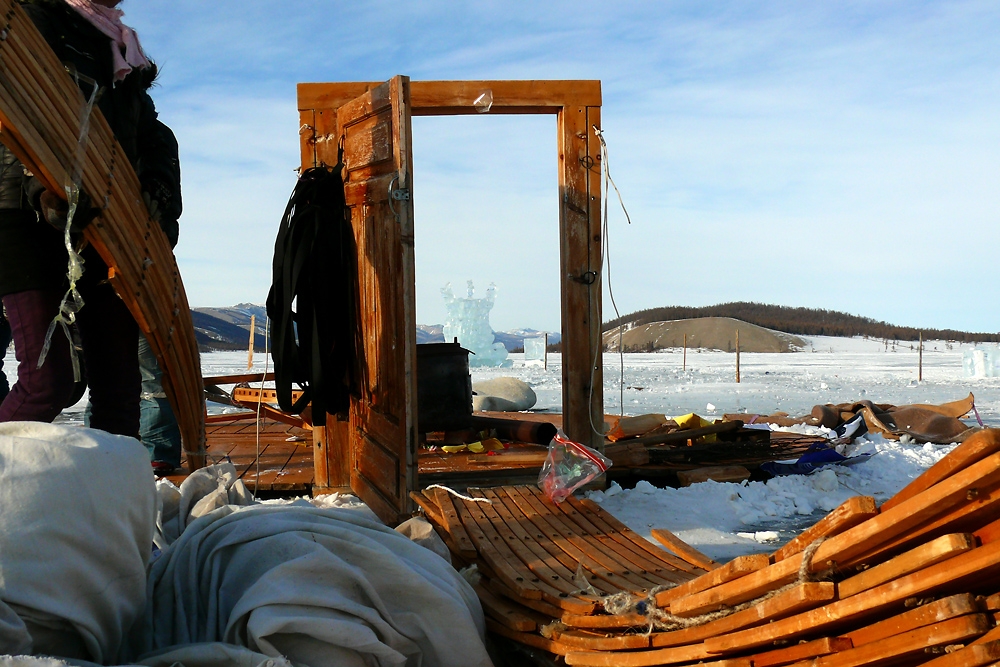 Gers are dismantled at the end of the festival, with the door always being the last to be taken down.
prev
next

Every winter for the past 15 years, adventurous Mongolians and foreign visitors have braved sub-zero temperatures to enjoy an ice festival. The two-day celebration in Mongolia’s far north, initiated by tourist companies based in the capital Ulaanbaatar, strives to boost tourism around Lake Khovsgol and raise awareness about the area’s fragile environment.

“The main idea was to promote winter tourism in the area and to provide an opportunity to locals to earn extra income during the low season,” says Enkhbaatar Byambadorj, the Manager of Active Adventures, the tourist outfit that organizes the festival. Though he admits the company has yet to turn a profit on the event, Byambadorj believes the firm’s investment will eventually pay off by encouraging local people to think of innovative ways to attract tourists and preserve the area, rather than opt for potentially destructive alternatives, such as illegal mining or logging. Several conservation groups set up information booths at the festival, distribution material that highlighted their work and publicized the region’s biodiversity.

During the summer months, the Lake Khovsgol region is one of Mongolia’s biggest tourist attractions. As Asia’s second largest lake in terms of volume, Khovsgol also accounts for 70 percent of Mongolia’s freshwater reserves. Since being designated as a National Park in 1992, visitors have been attracted to the area by the pristine waters and surrounding taiga. But tourism comes to a standstill during the long winter months when the lake freezes and temperatures plummet to -40°C. Winter visitors are so rare that ticket booths at the park entrance remain closed for the season.

Often the only visitors are outdoor enthusiasts who come for dog-sledding tours, or treks across the frozen ice. According to Julien Lespine, an independent French guide working in the area, there are usually less than 10 visitors between mid-December and early-February. The annual ice festival held in late February or early March has in recent years managed to draw a small crowd. The extreme cold and, for those who cannot afford expensive airfares, the bone-jarring 22-hour ride from Ulaanbaatar, are often big deterrents. But for residents of nearby villages, the festival has evolved into a colorful social affair that signals the onset of spring.

The festival relies on a loose network of volunteers to sculpt ice figures and prepare the ground for activities, including laying out a course for the 100-kilometer ice skating marathon. During the festival – held this year on March 2-3 -- villagers and nomads from around the lake arrive dressed in their best. For most visiting foreigners, the local crowd and surrounding scenery is more of an attraction than festival activities themselves. “It’s quite low-key as far as festivals go, but just the fact we’re in such a beautiful place makes the trip this far up worth every bit,” said Marilyn Teorey, an American visitor.

For locals, some years are better than the others. In 2007, an international team of 200 ice skaters competed in the skating marathon. “That year was very exciting for us because of the all the foreigners at the festival,” said Ochirbat Luvsang, a local resident, who quietly admitted he had grown somewhat bored with the festivities since then. But for the majority of attendees, judging by the brisk sales at a small market on the grounds, the Ice Festival will continue to grow in importance to the local economy.