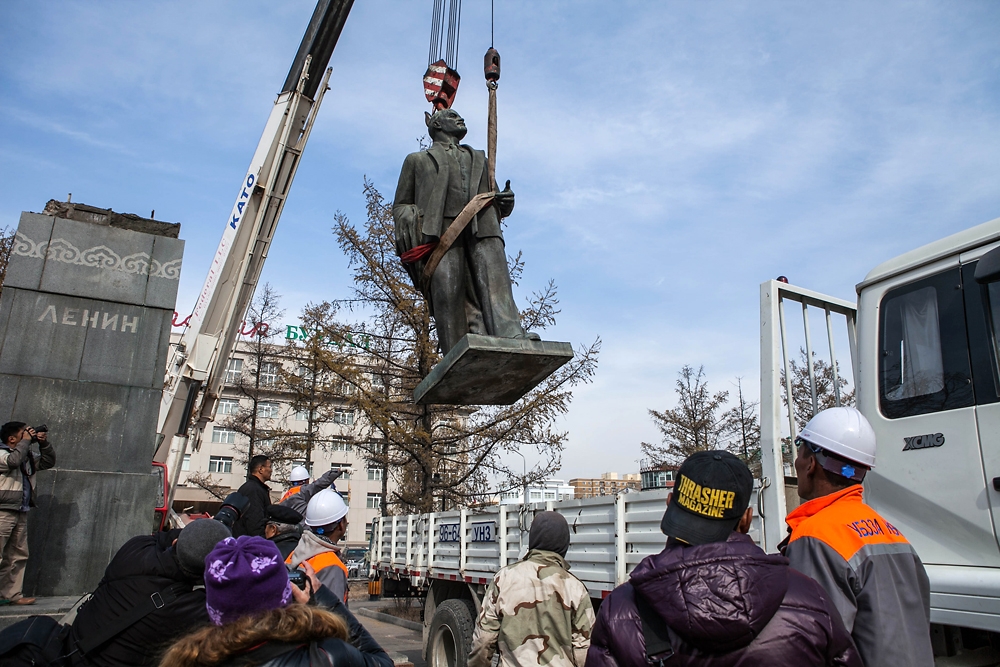 Lenin's statue is lowered into a truck from the pedestal where it stood since 1954 in Ulaanbaatar. 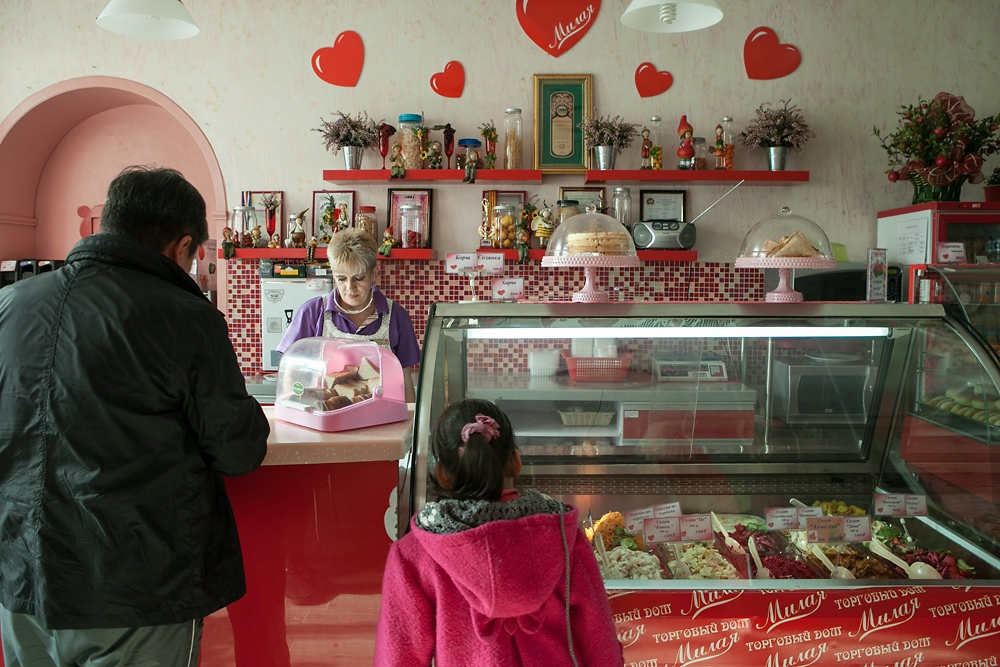 Though owned by Mongolians, Milay, a popular chain of Russian restaurants, often hires Russians to manage and train the cooks. 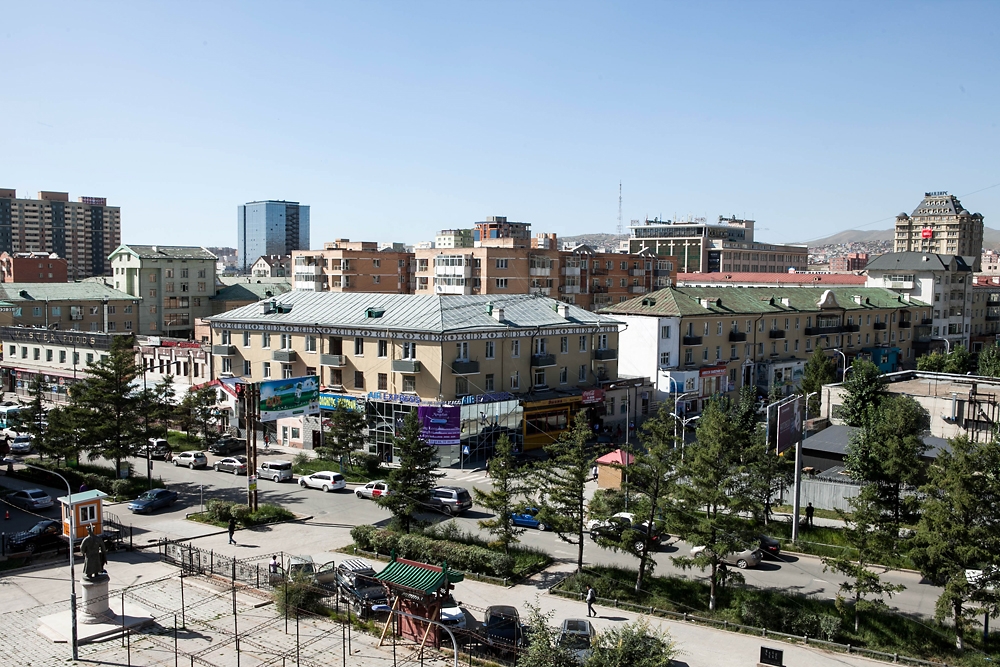 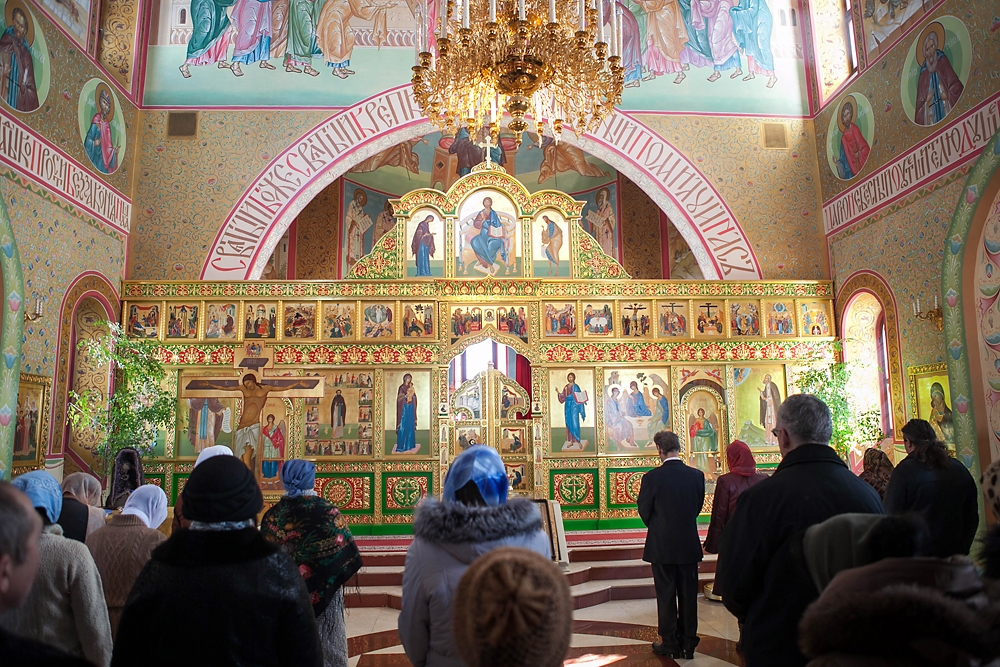 Believers gather at the Holy Trinity Parish of the Russian Orthodox church for Sunday service. 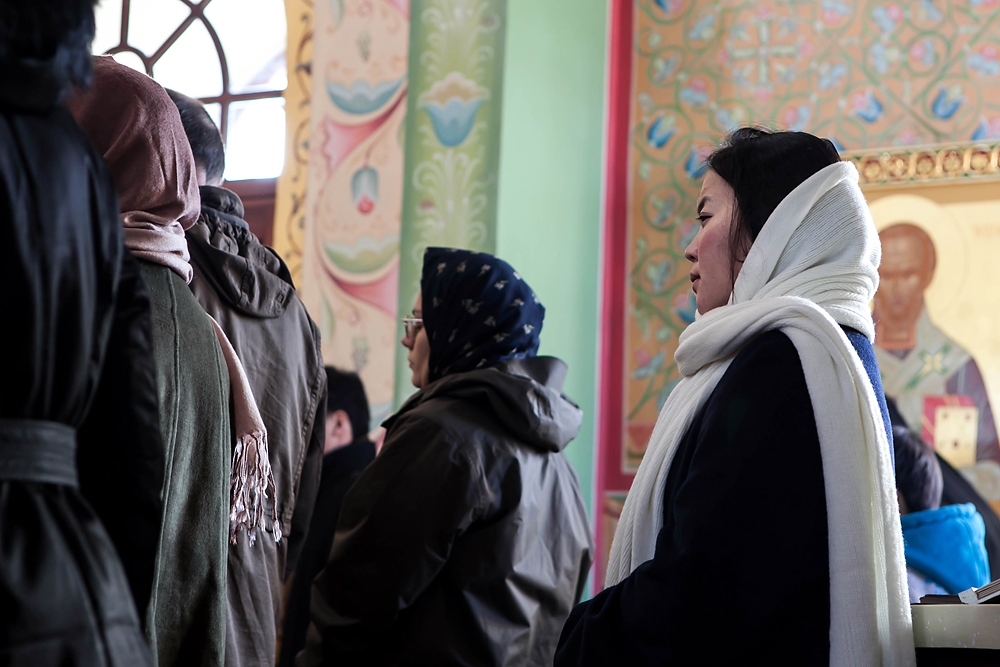 About 15 Mongolians form part of the 60-member strong orthodox church in Ulaanbaatar. 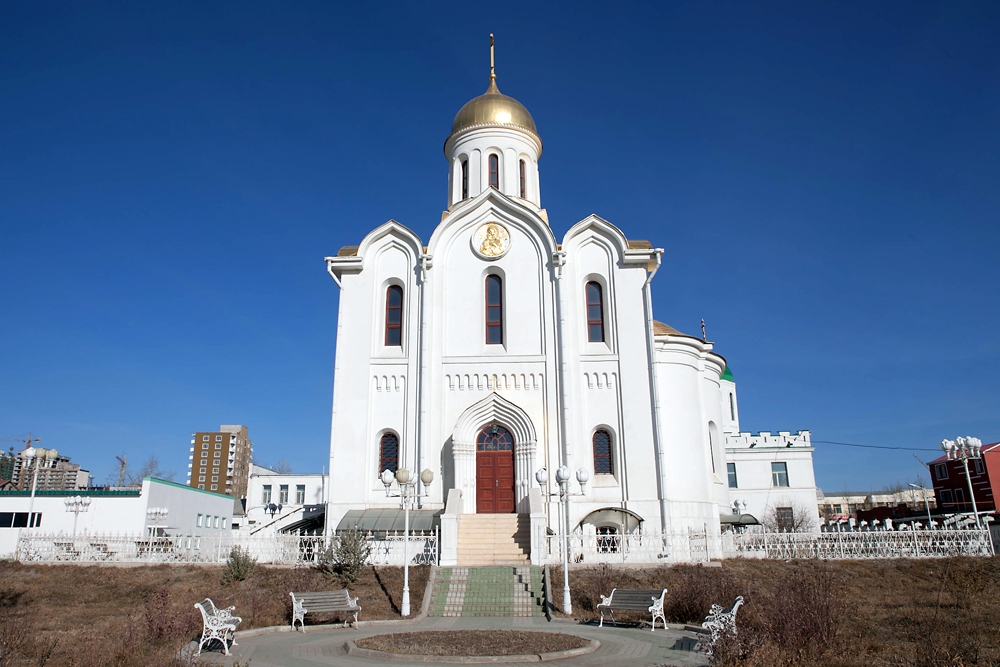 Present in Mongolia since 1873, the new building of the Russian Orthodox church was consecrated in 2009. 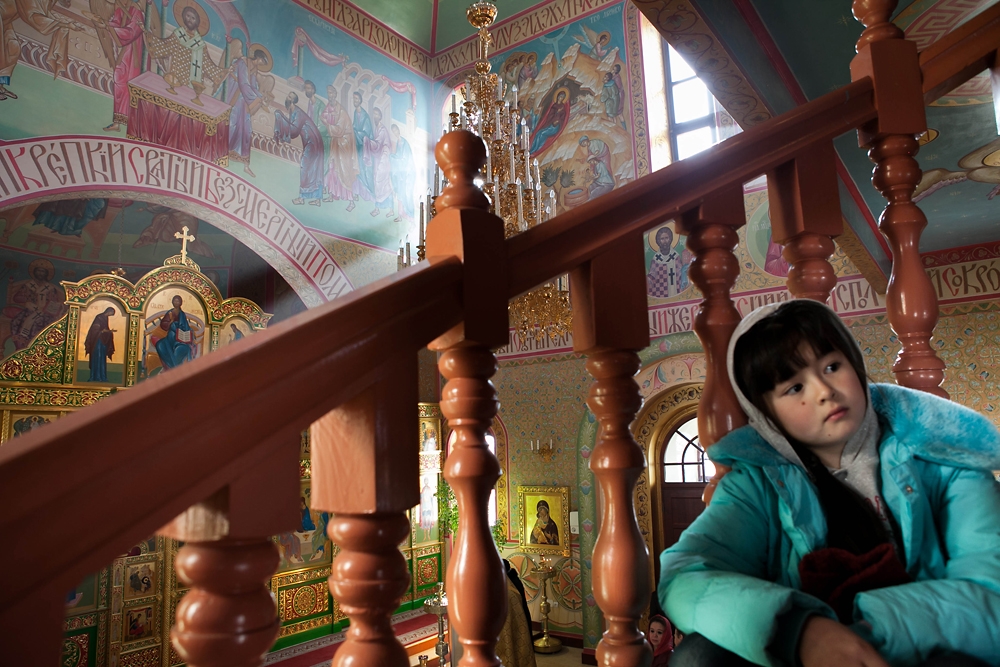 A young girl of mixed Russian-Mongolian heritage observes mass from the balcony wing of the church. 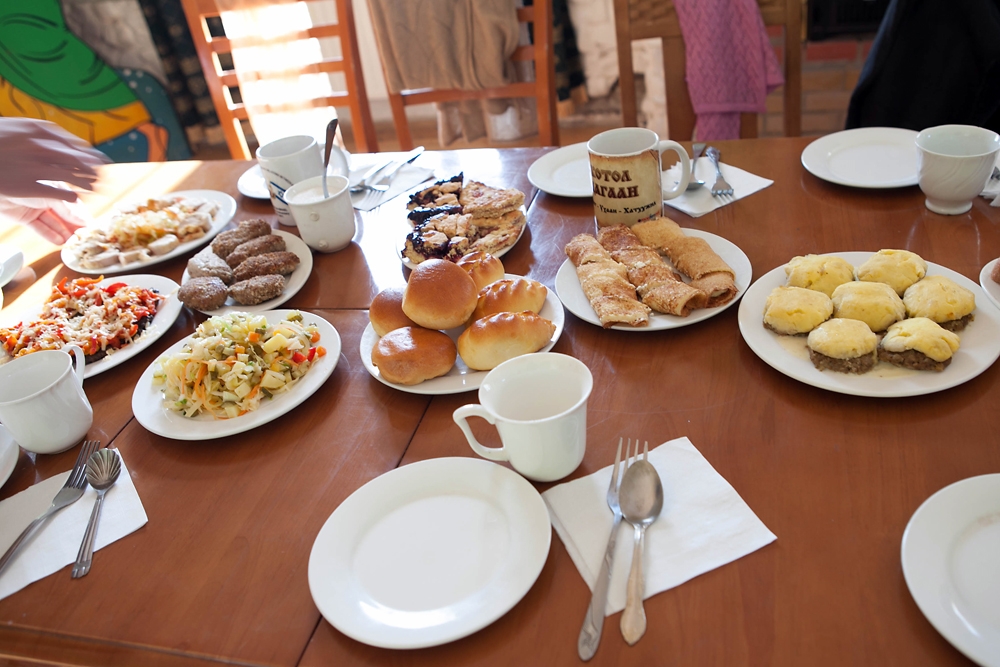 Traditional Russian dishes are laid out for the fellowship meal at the church. 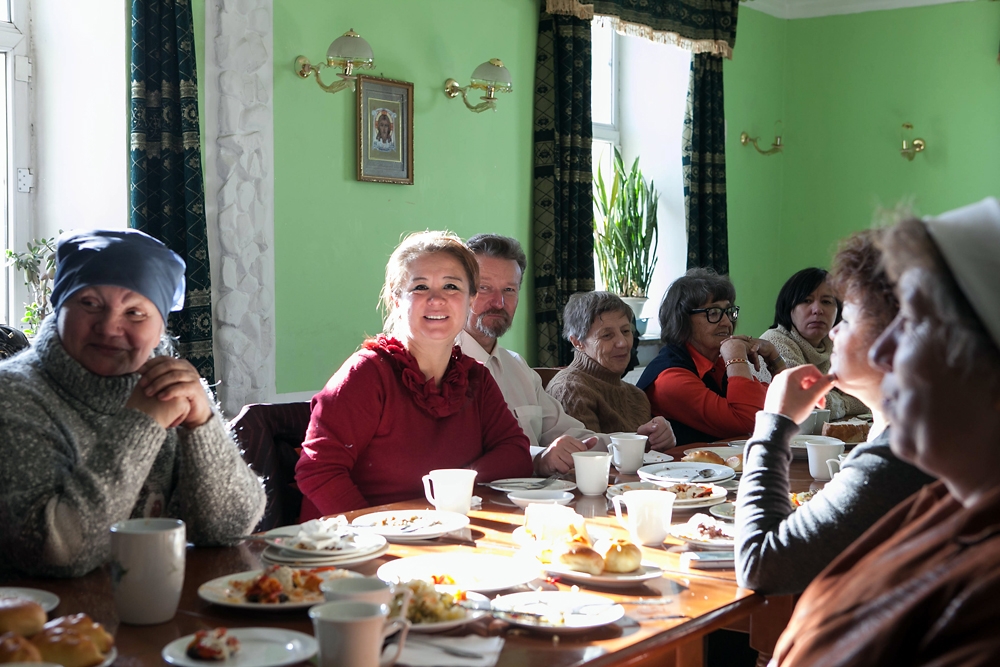 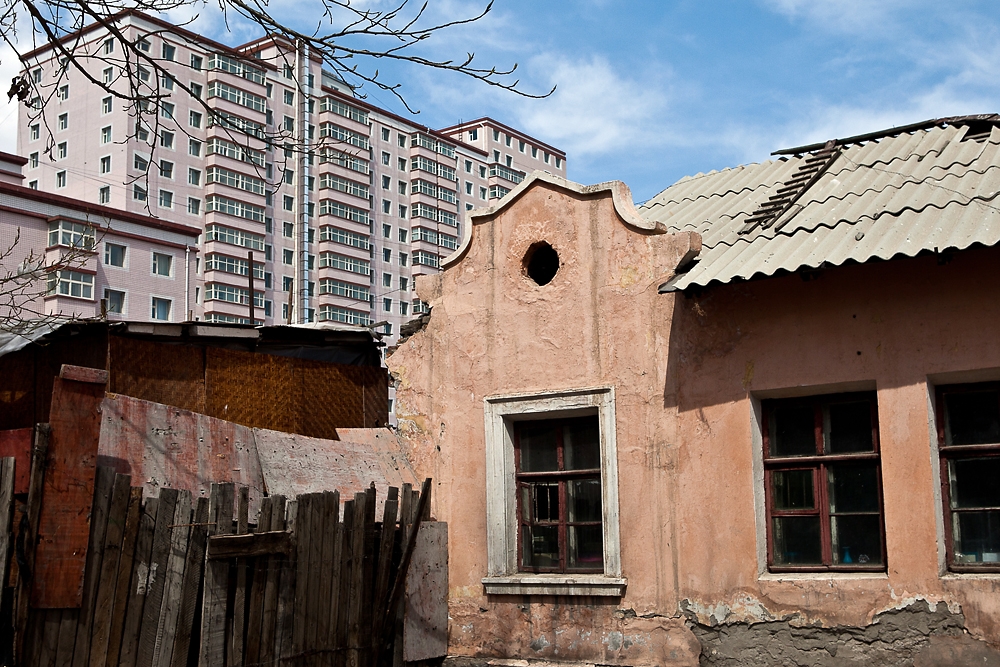 Crumbling Soviet-era Russian buildings have been torn down in many parts of the city to give way to high-rise apartments.
prev
next

On a chilly morning recently, workers in Ulaanbaatar dislodged Mongolia’s last statue of Soviet founder Vladimir Lenin from the downtown plinth where it had stood since 1954. A small group watched as the city’s new mayor recalled the repression that marked the communists’ years in power and denounced Lenin and his followers as "murderers.”

Among the excited murmurs that followed, a few Russian voices stood out. "Those who try to erase the past will repeat mistakes of the past. Lenin and the statue is a part of Mongolia's history – it should be kept," said Sergei Smolov, a middle-aged history teacher from Ulaanbaatar. "I see this as an anti-Russian gesture, more than an anti-communist one.”

Statues of Mongolian communist-era heroes still stand tall around the city, including that of General Khorloogiin Choibalsan, who, at Soviet leader Joseph Stalin’s urging, purged over 30,000 Buddhist monks in the 1930s.

But across Mongolia, signs of Russia's influence are fading. A few weeks before the Lenin statute was dismantled, the Friendship Gate -- a stout, white arch erected in 1956 to celebrate Soviet-Mongolian ties -- was torn down to widen a road. Smolov says he is no communist sympathizer; in fact, he descends from White Russians who fled to Mongolia following the Bolshevik coup. But he worries about what he calls attempts to rub out historical links with Russia.

Neoclassical Soviet-era buildings are being replaced by taller, shinier structures. Few people in Mongolia can still speak Russian. And even the nature of cross-cultural romances is changing. "In the Soviet years, mixed marriages usually meant Russian partners, but now it can be anyone," said an onlooker at Lenin’s unseating, a mixed Russian-Mongolian who wished not to be named.

Ulaanbaatar is still home to a small Russian community. Smolov is what Mongolians – combining the Russian word for “local” with the Mongolian for “Russian” – call a "mestny Oros” -- a descendant of Russian immigrants who arrived in several waves over the past century. The first arrivals predated the treaty of Russian-Mongolian friendship, signed in 1912, after Mongolia declared independence from China. The Bolsheviks’ rise to power brought in the next wave of Tsarist loyalists – White Russian settlers – fleeing the Red Army. Later, as Ulaanbaatar grew closer to the Soviet Union in the 1920s, Moscow introduced another wave of specialists and workers to help build Mongolia’s infrastructure.

When Mongolia scrapped communism in 1990, about 110,000 Russians lived in the country, according to figures from the Kremlin-sponsored Russian Cultural Center in Ulaanbaatar. The next decade saw an exodus of Russians. And today -- while many children of mixed Mongolian-Russian heritage have adopted Mongolian citizenship, and a few hold prominent positions in business and government -- the center estimates only 1,600 Russian passport holders remain permanent residents in Mongolia. Most speak Mongolian.

"I guess there are reasons to be proud of being a Russian," says Ivan Bazarov, a third-generation Mongolian-born Russian who works as a security guard at the Russian Cultural Center. Though he rarely visits Russia and says Mongolia will be his home for life, Bazarov says it is growing harder to live in Mongolia on a Russian passport. "It's more difficult than before for me to take a bank loan. And I can't buy land, for example. I feel more like a foreigner than before,” he told EurasiaNet.org, speaking in Mongolian.

Yevgeny Mikhailov, the center's director, says the Russian language has lost its preferred status in education. Russian was a compulsory subject for all schools in communist Mongolia, but today only a handful of schools in Ulaanbaatar still offer instruction in Russian. "Of course, before the Soviet Union was Mongolia's main connection with the world, but now Mongolia has chosen English to communicate with the world,” Mikhailov said.

Mikhailov is confident that Russia and Mongolia will maintain good ties and that an interest in Russian culture and arts, especially ballet [http://www.eurasianet.org/node/64867], will continue. The center also has seen a resurgence in interest for Russian language courses following a sharp drop in demand from 1994-2005. Partially because of Moscow’s financial support for Mongolians seeking to attend Russian universities, Russian-language schools are still among the most respected in Ulaanbaatar.

For the small community of Russians, the Holy Trinity Russian Orthodox Church still provides a place to gather. Established in 1873, and then closed in 1921 during the communists’ anti-religion campaign, Russian priests returned in 1996. Believers met in a converted building until the new church, adding golden domes to Ulaanbaatar’s skyline, was consecrated in 2009.

In his eighth year of service in Ulaanbaatar, Holy Trinity’s rector, Father Alexis Trubach, says attitudes toward Russians are changing. He sees increased hostility toward all foreigners because of Mongolia's mining boom. "In everyday life, the older generation still views Russians as friends because of our shared history,” he said. “But in the last few years I've seen more aggressiveness from the younger generation. I don't blame them; they are beginning to see all foreigners as invaders."

Today, there are some 60 regular parishioners at the church: mainly local Russians, but including about 15 regular Mongolians and a handful of other nationalities including Germans and Americans. The service is conducted in Church Slavonic and Russian, but Father Alexis hopes to introduce Mongolian and even English to the service in order to appeal to a wider audience.

At the after-service fellowship meal, Marina Fomina, 45, a mestny Oros schoolteacher whose grandparents moved from Irkutsk to Mongolia as sharecroppers in the 1930s, describes the personal importance of the church in perfect Mongolian. "After working the whole week, we come here to relax and talk to each other,” she said. “It's an important place for us. It is definitely a major place to meet other Russians."

The future of the community depends on people like Fomina. Her relatives have all moved back to Russia in the last decade. Though she considers Mongolia home, she hopes her 14-year-old daughter will continue her higher studies in Russia and settle there. "I can go back to Russia anytime for visit, or temporary stay but I consider Mongolia my motherland,” she said.