Mongolia: The Land of Steppes Searches for Urban Planning Solution 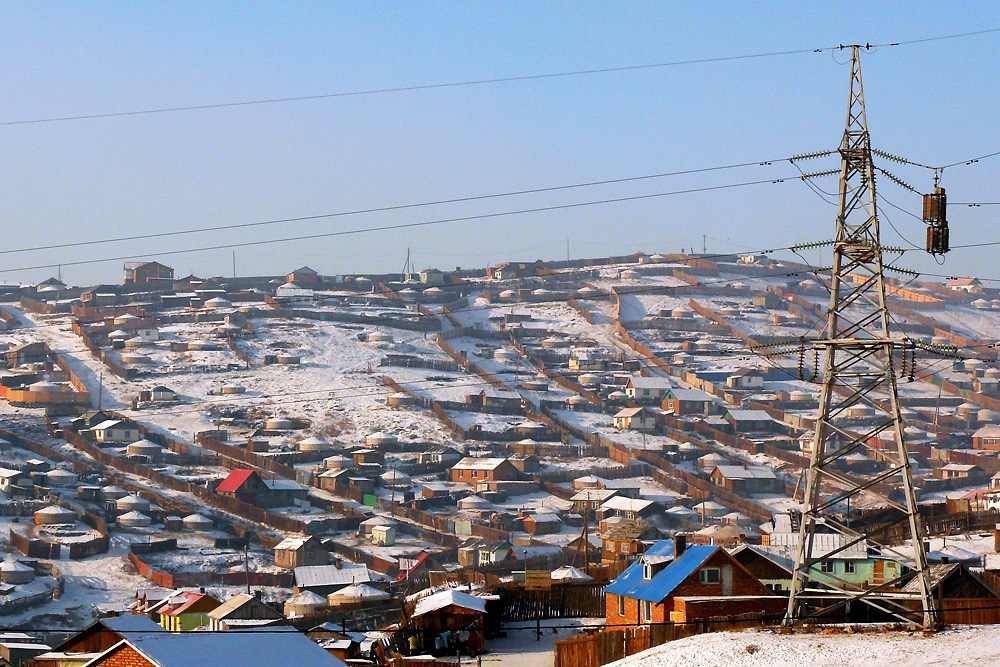 A patchwork of wooden fences, marking land plots, dot the hills around Ulaanbaatar. Two women and a child navigate the tricky descent down an iced up road in the ger district. 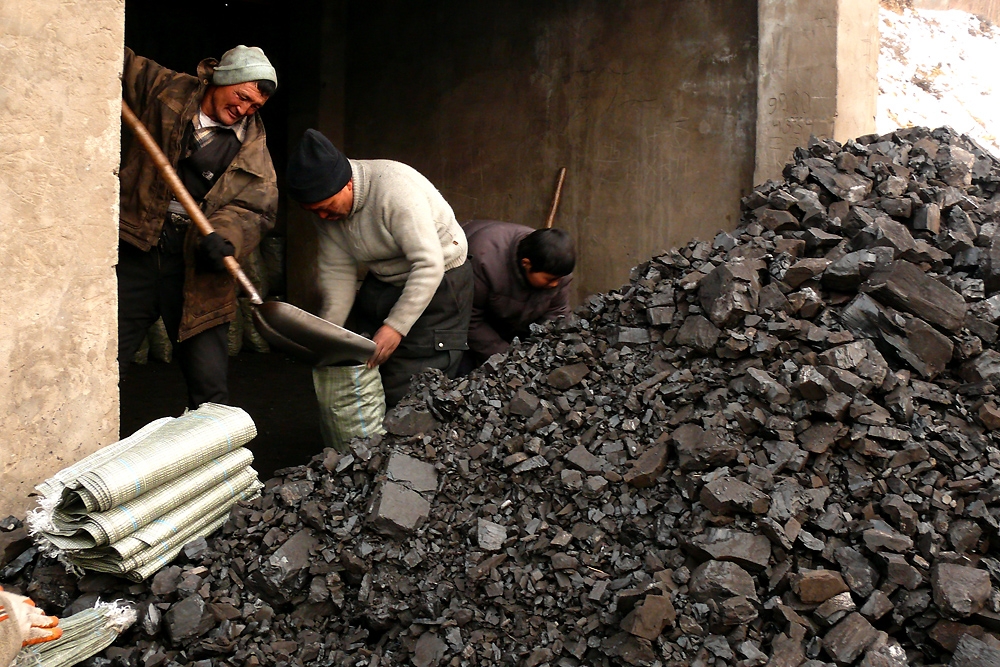 Men shovel raw coal into bags which they sell at a wholesale price of $.72 a bag to re-sellers. With few means of transportation, ger district residents often have to travel in packed vehicles. 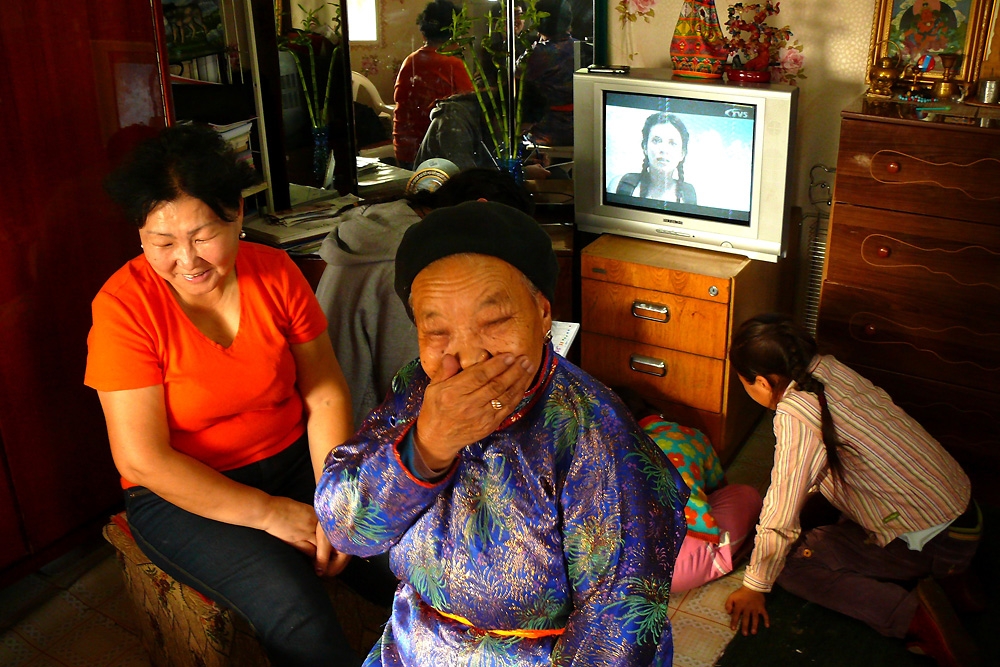 Baigalamaa (left) and Ukhnai do not want to leave their ger district homes and kitchen gardens for new apartments. Boys from the ger district amuse themselves on the wall of Gandan Monastery, one of the few that escaped the Soviet purges. 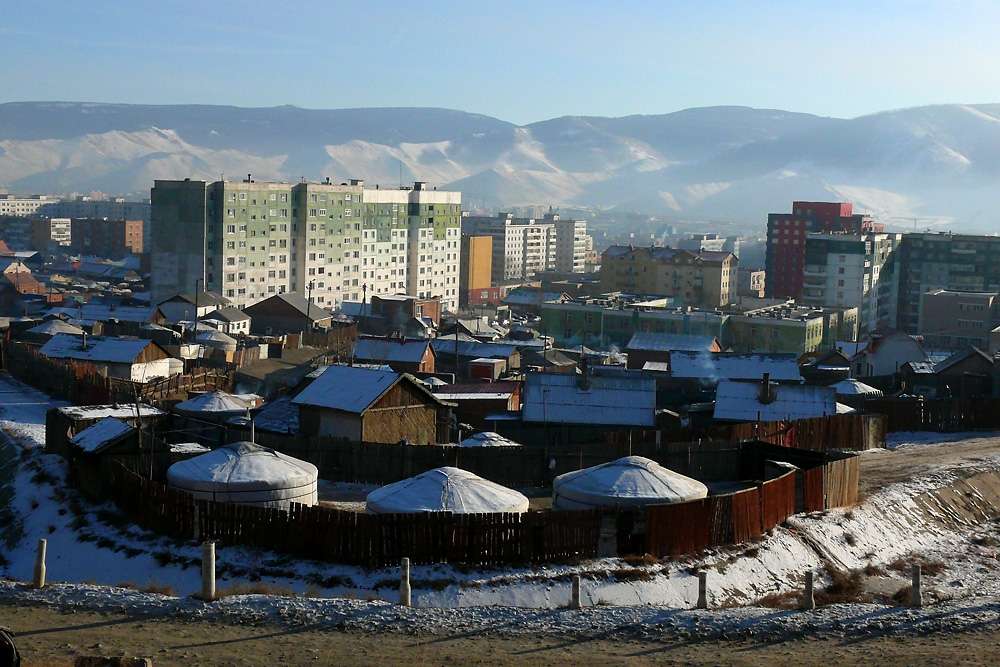 An agronomist examines thermometers in a passive solar green house designed to extend the growing season by three months. A ger's bright carpets and colorful interiors make up for the drab exteriors. A house in the ger area also means a yard that apartment complexes rarely provide, in this case for a basketball court. Collecting water at the nearest water kiosk in the freezing cold is a daily inescapable chore of ger district residents. 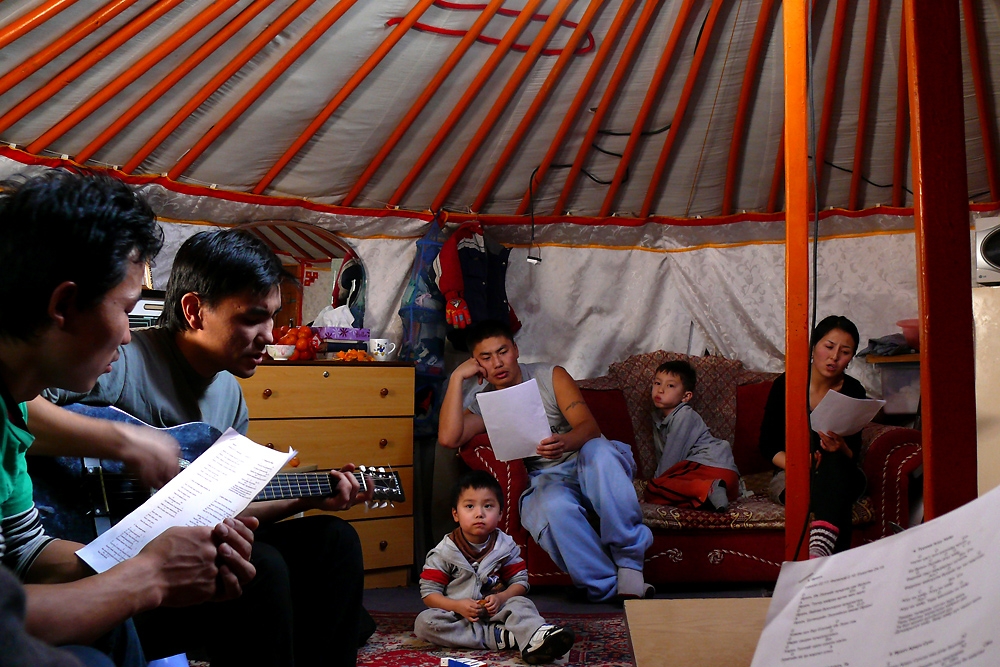 Recent migrant to the city, Dendinjav (right) hosts friends in her ger. 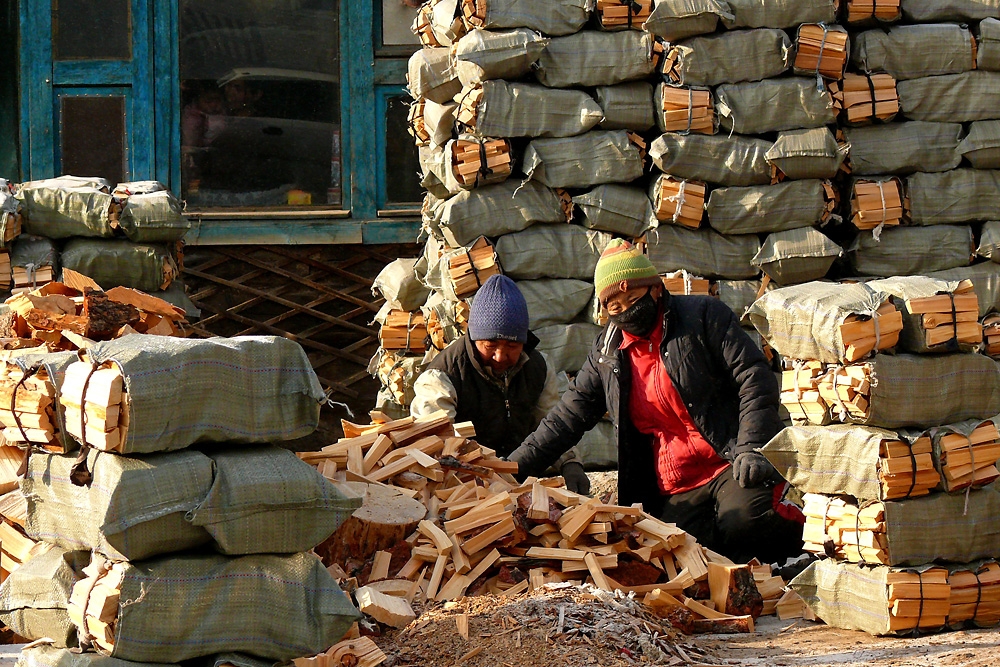 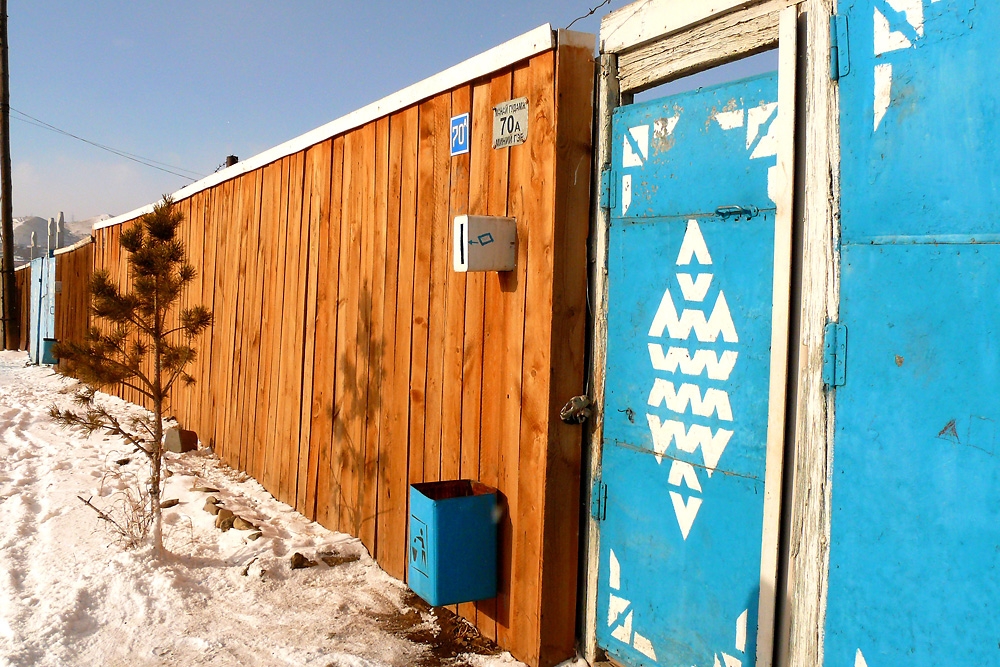 Renovations on some homes by a community project aims to make ger districts more attractive and pleasant.
prev
next

Mongolia may be best known for its endless steppe and nomadic culture, but a significant demographic shift is underway in which rural residents are crowding into urban centers, especially in the capital Ulaanbaatar. Hundreds of thousands of Mongolians face declining living standards as they pack into the capital's polluted, unplanned "ger districts" -- named after the traditional nomad tent being used by migrants unable to find affordable housing.

Ulaanbaatar's population is exploding, rising 70 percent in the just the past 20 years, according to World Bank estimates. Capital city residents now comprise roughly half of the country's population of 3 million, leaving government and international development agencies scrambling to find urban planning solutions. "The city is not meant to cope with this size. The demand for basic urban services has long superseded what is available," says Bijay Karmacharya, chief technical advisor at UN Habitat.

Standing on a hilltop on the fringe of Ulaanbaatar's northeastern sector, 22-year-old Myagmasuren, who like many Mongolians uses only one name, says that six years ago his family was one of the few residents of his suburban district.

Downtown, glinting through the perpetual winter smog, shiny high-rise buildings remind urban newcomers of the possibilities that lured them to Ulaanbaatar. "From here we can really see the social divide of the city -- the north for the poor, downtown for the middle class and the south for the ultra rich -- you'll notice it's the north side that's winning in numbers," Myagmasuren says with a chuckle.

An uptick in urban migration has followed several recent harsh winters that decimated livestock across the country. Many destitute nomads arrived after a 2003 court decision that provided for freedom of movement within the country and the opportunity to grab 700 square meters of land and register it.

On average, residents of the ger districts have access to just 6.7 liters of water each day, compared with 261 liters per person per day for apartment dwellers, according to a UN study. "The income disparity is growing so alarmingly it's scary," says Karmacharya of UN Habitat, who feels this disproportionate access to resources coupled with unemployment is breeding anger. Violent street crime is on the rise.

The government has started a campaign to move the ger settlers into apartment buildings with its so-called "100,000 Housing Project," officially adopted last year. Authorities seek to build 75,000 high-rise concrete apartments in the city, 25,000 more in rural areas, and free 14,000 hectares of land in the process. Yet skepticism for the project abounds.

"First there's a huge question of affordability -- very few ger district dwellers can dream of affording apartments even if subsidized, and, second, there is very little trust in the government when they ask people to vacate their lands in return for subsidized housing, [a process that] may take years to complete," says the Open Society Forum's Gerelmaa Amgaabazar, who surveys ger districts to study education marginalization of the urban poor. [The Ulaanbaatar-based Open Society Forum is affiliated with the Open Society Foundations (OSF). EurasiaNet operated under the auspices of the New York-based OSF].

For Bayanzurkh District's 55-year-old Baigalma and 75-year-old Ukhnai, relocating to high-rise apartments is unimaginable. Though they have seen the ger districts mushroom and place tremendous stress on local resources -- a nearby river even dried up -- they say they are still happy for the independence their makeshift homesteads allow. "I can't give up my life here and my kitchen garden to live in a concrete box," says Baigalma.

The two women lead a community savings group started by the Urban Development Resource Center (UDRC), a local non-governmental organization. Aimed at improving living conditions in ger districts though small community projects, they have spearheaded efforts to clean up their neighborhoods by planting trees, installing dustbins and streetlights, and building a public water reservoir.

"What people need are jobs, not more empty, unaffordable apartments," says UDRC chair Enkhbayar Tsendendorj, who dismisses the government housing project as ill-conceived. The lack of community engagement and officials' tendency to view the ger districts simply as settlements to be removed have encouraged resistance to the project, she believes.

But staring through the smog to the shinny buildings downtown, others like Myagmasuren would welcome the opportunity to move into an apartment. "I really won't mind running water and a chance to escape the pit latrines," he says.