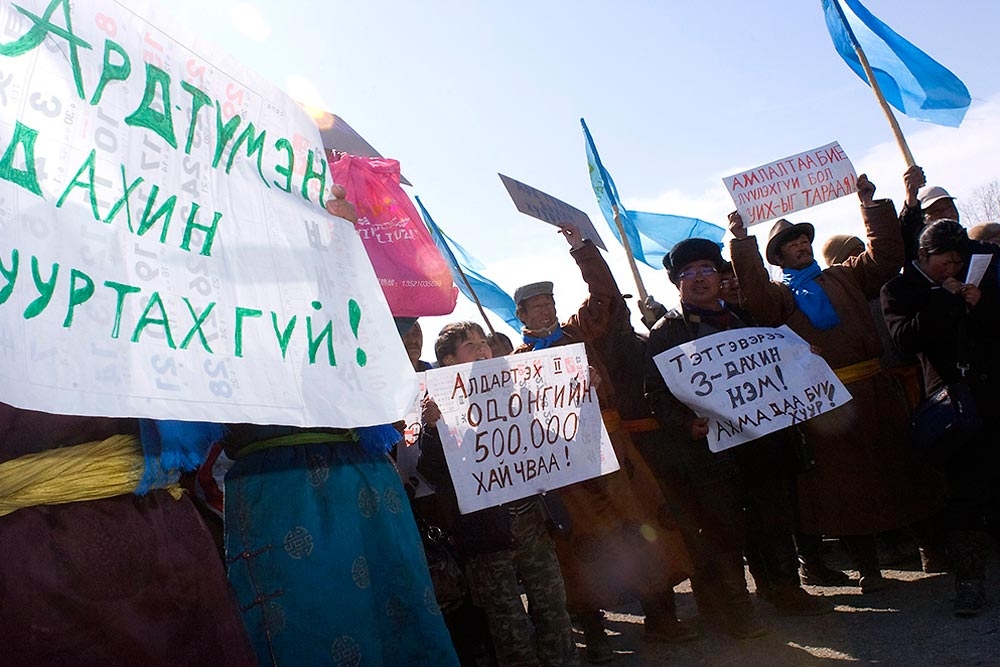 PMDEP held a series of nationwide protests, including this April 5 rally in the western city of Hovd. (Photo: Andrew Cullen)

A primary cause of upheaval in Central Asia over the past five years has been the inability of governments in the region to respond to popular concerns and complaints. The leaders of Mongolia appear determined not to make the same kind of mistakes, and in recent months they have taken steps to demonstrate a greater degree of accountability.

Mongolia, though never a constituent part of the Soviet Union, was during the Communist era often referred to jokingly as the "16th republic," and its political system mimicked that which existed in Moscow. And for much of the past two decades, Mongolian leaders practiced a post-Soviet style of electoral politics, in which many promises were proffered during a campaign season only to be forgotten following an election. Lately, however, Mongolian officials have been making a far greater effort to follow up on their pledges, and respond to the desires of the electorate.

"You hear the words ’accountability’ and ’responsibility’ much more often these days," says Ulziikhishig, the director of the School for International Training in Ulaanbaatar, who like many Mongolians uses only one name.

The change has been a long time coming, says Sanjaasuren Oyun, the lone representative in parliament for the Civil Will Party and a well-respected opposition figure. "In 2000, the Civil Will Party was a lonely voice calling for good governance and didn’t get much support. But in the last few years, there’s more," she tells EurasiaNet.org. Now, "parliament is more aware of the right and responsibility for oversight."

While the trend toward accountability may have gained speed in recent years, a series of early April protests has helped place the accountability issue on the center stage of Mongolian politics. At one protest, 5,000 protestors converged on Ulaanbaatar’s main square on April 5 to demand that the parliament to pay each citizen 1.5 million tugriks (about $1,150) as promised during campaigns in 2008.

The promise is connected to a $5 billion deal concluded with Canada-based Ivanhoe Mines to exploit the Oyu Tolgoi gold and copper deposit. The government agreed to the deal last fall, and public concern over the use of the nation’s mineral wealth has since grown. [For background see EurasiaNet’s archive].

"The population feels that the [quality of living] is worse [now] than at the same time last year," says political analyst Luvsandendev Sumati, whose Sant Maral Foundation conducts polling across the country.

Spearheaded by a coalition of civic groups called the People’s Movement to Demand Election Promises (known as ANATX in Mongolian), protest leaders demanded that MPs resign if they refused to approve the promised payments.

The government agreed to distribute the money, but largely in the form of social services rather than as direct cash handouts. Refusing to compromise, ANATX leaders organized a hunger strike that started April 9. The strike will end, the civil society activists insist, only when their demands are met - a strategy that echoes the hunger strike of the original democratic protests in 1990. Some hunger strikers were hospitalized on April 14,

Though the government of Prime Minister Sukhbaatar Batbold shows no signs of bowing to protester pressure, he has taken pains to assure the public that the national interest is guiding parliament’s deliberations.

Batbold also has tried to reassure disgruntled Mongolians by taking a tough stance against corruption. In addition, he released a letter to the public on April 4 outlining several economic stimulus measures. At a recent anti-corruption seminar, the prime minister said it was imperative to convince the public that "our words are not empty rhetoric," according to the local news agency News.mn on April 21.

"There are some positive developments in this direction," says Sumati, the pollster. "I believe they care about keeping their promises. But they made promises without looking at how they could actually fulfill them."

"Now we have an elite that is interested in tuning the machinery. Otherwise we’ll have a situation like in Kyrgyzstan with non-stop revolt. [Mongolia’s elite politicians] are rich and well off, and they want to stay that way. If they want to stay country managers, they need to be more professional," Sumati added.

In a separate effort to foster a more responsible legislature, a working group of high- ranking MPs submitted a new election draft law to Parliamentary Speaker Damdin Demberel on April 9. If passed, the legislation would bar candidates from promising cash handouts during campaigns, and would institute a proportional representation system that would place more of the burden for funding campaigns on the political parties themselves, rather than individual candidates.

"We want to reduce the money factor. With every election, money is becoming the main factor," says opposition MP Oyun, of the Civil Will Party, who worked on the draft law.