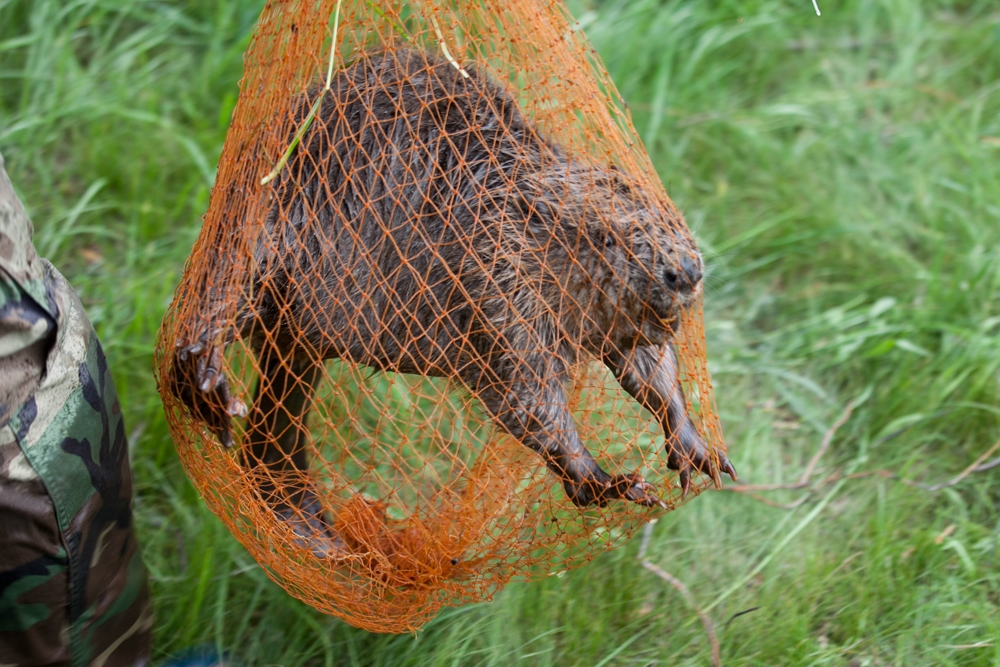 A Eurasian beaver is netted and placed back in its cage for further monitoring before it is released. (Photo: Pearly Jacob)

Meet the Eurasian beaver (Castor fiber). If all goes according to plan, the task of restoring the headwaters of the Tuul River will be left to these rotund rodents, with extra thanks to Germany and Russia. At home, due to poaching, their numbers have declined sharply in the past 20 years. But in May, Germany gifted 14, and Russia another 30—just for this special task.

With their sharp, ever-growing teeth, beavers fell trees and build dams to flood areas for protection from predators. Many scientists believe beavers can contribute to river ecosystem regeneration and restoration because their natural dams help maintain river levels during dry spells, while the flooded areas help nourish the soil and promote plant growth.

"Beavers are diplomats of the environment," says Delgermaa Yunger, director of the Nature Protection Agency’s office at Ulaanbaatar’s City Hall. The agency is in charge of the beaver introduction program. Water levels in the Tuul have been declining since the late 1990's, she says. A 2003 survey conducted by the City Council revealed 22 of 72 tributaries of the Tuul had dried up. Sections of the riverbed often dry out each spring.

“Fifty to 60 percent of Mongolia's population lives along the Tuul. It's a very important river and we have to do what we can to make sure we protect it for the future. The beavers will be the cheapest and most effective natural method," says Yunger.

According to her office, one billion tugriks (about $740,000) have been earmarked for the project. The plan is to breed the beavers from Germany in captivity. Sixteen of the Russian beavers – which are better adapted to cold Siberian winters – were released into special zones along the headwaters of the Tuul in early August. They will be monitored and provided food and shelter if required, Yunger says.

Beavers are no strangers to Mongolia. A rare indigenous sub-species of the Eurasian beaver known as Castor fiber birulai inhabits the Bulgan River in Hovd Province in the west. But if the project is successful, this will be the first beaver colony on the Tuul. A previous introduction attempt in 1984 failed, says Samjaa Ravchig, an animal expert at the National University of Mongolia.

In 1984, a Mongolian prime minister was so impressed with Canadian beavers during a trip to North America that he ordered four beavers from the Bulgan River to be released into the Tuul. None survived. "There was probably little scientific backing [for the project]. The beavers were probably too few and couldn't breed with each other," says Ravchig, who has been studying the Bulgan beavers since 1974.

Ravchig was invited to head the scientific team overseeing the current beaver introduction project. The government's willingness to spend money on natural rehabilitation was a welcome opportunity for him. "It was like a star in the day sky," he says. He believes beavers are more appropriate than artificial dykes or dams and will pose no threat to local wildlife. "The vegetation along the Tuul headwaters is well suited to beavers."

Citing a beaver reintroduction project in Bavaria, he cautions this is a long-term project with little hope for immediate success. "They hunted their last beaver in Bavaria in the 1960s. After they re-introduced beavers from Russia in 1966, it still took nearly 10 years for the beavers to successfully adapt and build their dams,” he says.

Today, Bavarian beavers are exported across Europe, to areas where the animals had been hunted to near extinction, for reintroduction programs. In Mongolia, following the Communist collapse in 1991, the Bulgan River sub-species were poached till numbers plummeted to about 1,000, says Ravchig. While the population is making a comeback, it's still listed as critically endangered in the Mongolian Red Book—a reason why these indigenous beavers were not deployed for this experiment.

In Yunger's office at the City Council, a furry artificial flower sits among her pens on her desk. "It's beaver fur," she admits sheepishly—a gift from a beaver farm in Russia she visited while scouting for donors. But this, she insists, will never happen in Mongolia, because local community support for the project will deter illegal hunting. "These beavers are strictly here to help restore our rivers," she said.