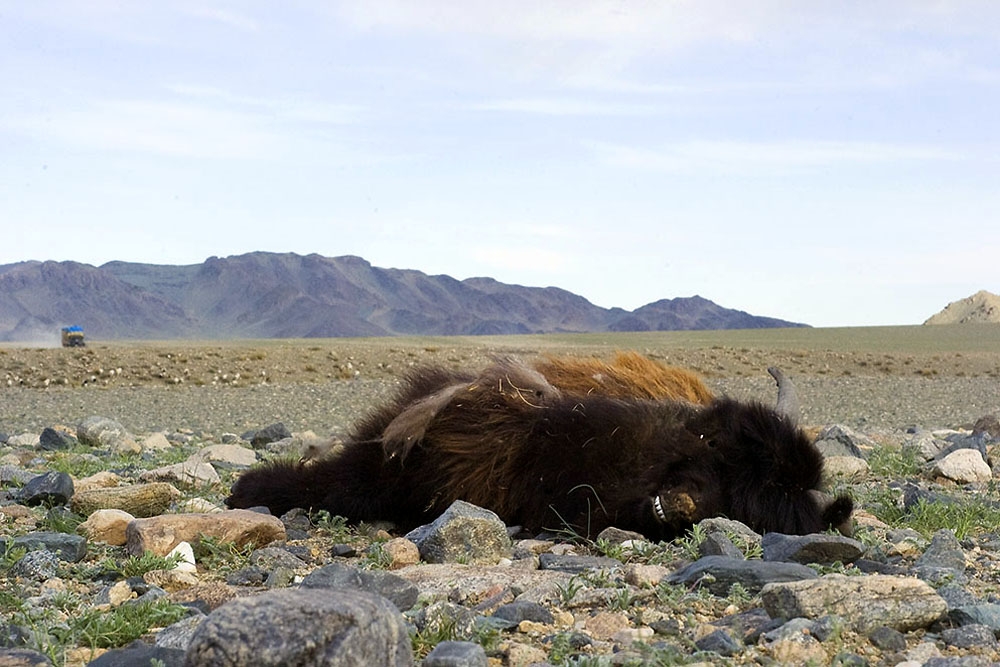 Mongolia's murderous winter left the countryside strewn with the carcasses of goats, sheep, and other livestock. (Photo: Andrew Cullen)

The arrival of summer is prompting nomadic herders in Mongolia to come to terms with this past winter’s devastation, which left may without animals or income. For thousands, there is no alternative than migration to cities.

The disastrously long and cold winter, known in Mongolia as a dzud, killed eight million animals - 18 percent of the nation’s livestock - in a country where a third of the population depends on herding for a living, according to the United Nations.  [For background see EurasiaNet’s archive.]

As of mid-May, over 32,700 families had lost at least half of their animals, including 8,711 households left without any livestock at all, the UN said in an inter-agency appeal to respond to the dzud.

For many of these hardest-hit families, summer’s respite comes with serious questions about what to do next. “For those who have less than 100 [head of] livestock, it is quite difficult to continue,” says Purev Ongonsar, a United Nations Development Program (UNDP) program officer for disaster management.

The UN expects 20,000 Mongolians to relocate to urban areas in the aftermath of the dzud. Like the dzud itself, “it will be a gradual process. People won’t go to one place – they’ll go to where they have family, where they can find land,” says Bijay Karmacharya, a UN Habitat representative in Mongolia. “For us, the challenge now is to track it. The tracking mechanism is not in place.”

Some families have already abandoned the countryside, moving to provincial centers and Ulaanbaatar, the crowded capital, in search of new opportunities.

Esengeldi, an ethnic Kazakh who like many in Mongolia uses only one name, brought his family to the Hovd Province center after his 80-animal flock was reduced to just a few this winter. Having moved their ger, the traditional felt tent of the Mongolian steppes, into a family compound with his in-laws, Esengeldi now works as a porter at an outdoor market, hauling 50-kilo sacks of flower through the narrow rows of stalls for local merchants. Though he may make only 4,000 tugriks (less than $3) on the best days, “it’s better in the province center. If you want to work, you can just go and find some,” he told EurasiaNet.org.

Enkhod, a middle-aged woman who lost all but a dozen animals this winter, relocated to Ulaanbaatar from nearby Tov Province with her family. After a life in the city, they had spent 10 years in the countryside, tending to a steadily growing flock. “Since we lost our animals, we lost our means of livelihood, so we decided to come to Ulaanbaatar and find work,” she says.

But moving to the city entails its own logistical problems for dzud-driven migrants. On the advice of an acquaintance, for example, Enkhod’s family settled on a hilltop on the outskirts of Ulaanbaatar, more than an hour’s bus ride from the city center. Using a 70,000 tugrik ($51) payment from the government’s mining-derived Human Development Fund (HDF) -- money meant, in part, to alleviate the stress of the dzud -- they began to build a fence around their property. The family has to finish building the fence before they can get the deed to the land, or register with the local authorities. Until then, they must travel back to their former district in the countryside to receive social services, including the HDF payments. They also miss the freedom of the countryside, she says.

Enkhod and her family had experience living in Ulaanbaatar, and her husband was able to return to his old job operating heavy machinery for the city sewage department once they returned.

For other herders, those who have lived all their lives in more remote areas of the country and lack valuable skills, migrating to the capital is more daunting. Many herders are “not ready to give up. They want to try herding another year. If it doesn’t work, they will think of something else,” says the UNDP’s Ongonsar.

Nergui, a herder in Hovd Province who lost all but 20 of his 200 sheep and goats, is one of those wanting to stick to the pastoral lifestyle. But he says he needs government help to make his herd viable again. “If a restocking program is implemented, then I’ll probably keep herding. If there’s no program, there’s no point in watching 20 animals,” he said.

The government and development agencies have given some aid to help herding families through the coming months. Herders in three of the worst-hit provinces participating in the UNDP’s cash-for-work program received about $70 each to help dispose of carcasses. That program eliminated a health hazard, while giving herders enough money to provide their families with essentials for a few months.

The government will reportedly use an Asian Development bank loan to pay 300,000 tugriks (about $220) to families who lost all their animals, according to the website news.mn. “If the government had started [making the 300,000 tugrik payments], this is only going to help people in the short term. But this does not address the issue of rehabilitation and generating income,” says UN Habitat’s Karmacharya.

Whether the herders move to the cities or carry on in the countryside, many seem to agree that leaving their fortunes to the elements is not an option. Across the countryside, nomads have begun to talk of starting herders’ cooperatives, reducing herd numbers to focus on healthier animals that produce more meat and cashmere wool, or settling down and growing vegetables.