Most foreign leaders stayed away, but Putin’s Central Asian crew is a dependable lot. 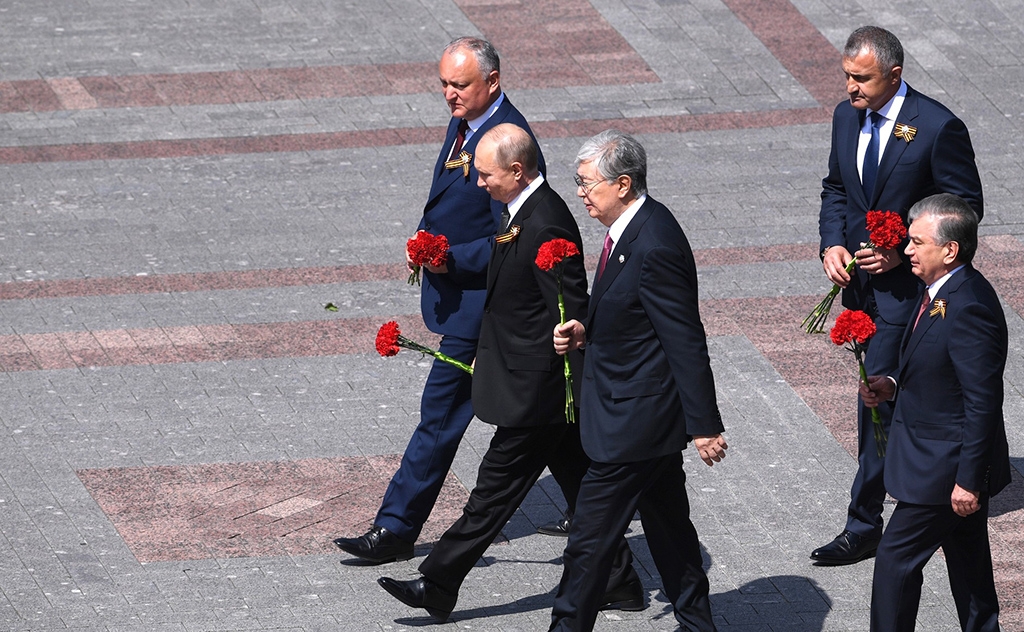 Friends indeed (all photos Kremlin.ru except where noted)

The leaders of a handful of post-Soviet republics turned up in Moscow today to watch thousands of soldiers (without masks) celebrate the 75th anniversary of Nazi Germany's defeat.

A key event on the Russian calendar under Vladimir Putin, the parade normally happens on May 9, a day of almost religious significance in the mythology of Russian power. Coronavirus delayed the festivities this year. And though Russia is suffering one of the world’s worst outbreaks (over 600,000 infections, the third most cases after the United States and Brazil), officials suddenly eased lockdown two weeks ago. Critics say Putin insisted the show must go on before Russians vote next week on changes to the constitution that will allow him to stay in power through 2036.

Mayor Sergey Sobyanin had urged Muscovites to stay home and watch the parade on television, but thousands lined the city’s broad boulevards, journalists in Moscow reported. On the dais next to Putin sat a group of aged World War II veterans who had been quarantined for two weeks before they were allowed so close to the Russian leader. 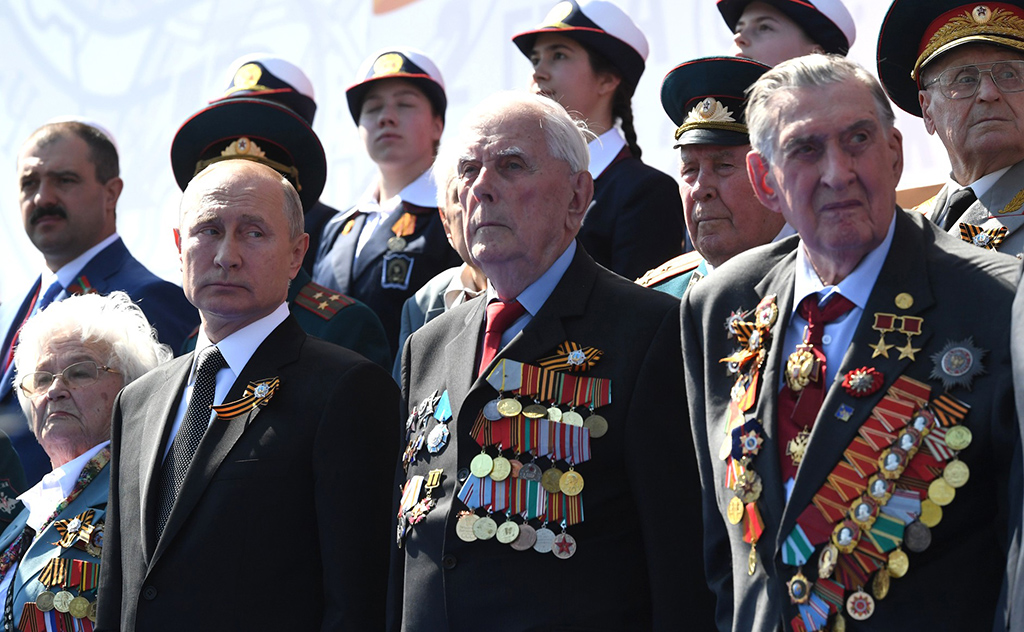 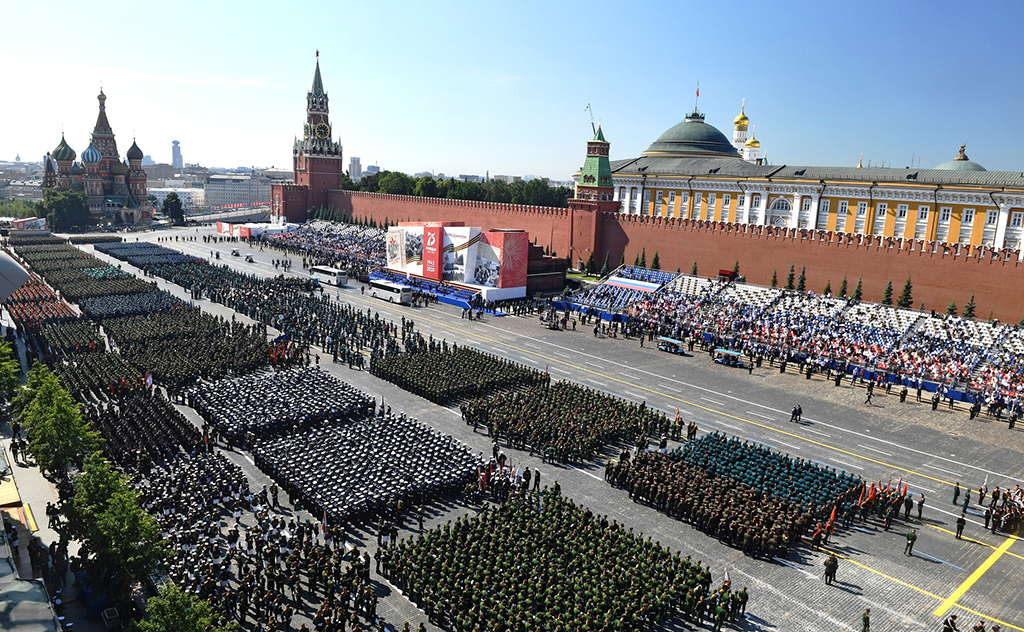 The leaders of Armenia and Azerbaijan bowed out at the last minute citing the pandemic, though both were dealing with other crises at home. President Soronbai Jeenbekov of Kyrgyzstan flew to Moscow to attend, but had to stay away because two aids tested positive for COVID-19 upon arrival.

Kyrgyzstan's president, who makes a point of NEVER wearing a mask or taking proper precautions, arrived in Moscow yesterday but has refrained from going to Victory Day parade because two people in his retinue have been found to have coronavirus https://t.co/2RzSMLp4oI

A few other countries sent military delegations, including rivals Armenia and Azerbaijan and China and India. China’s was the largest foreign military contingent, the New York Times reported. 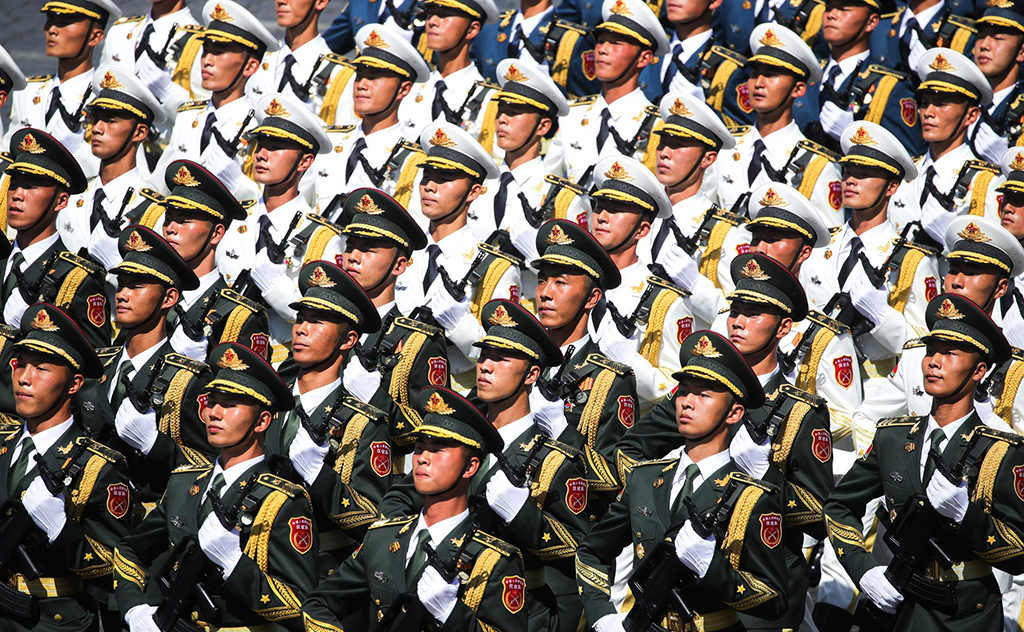 Even isolationist Turkmenistan sent a small military parade. Turkmen President Gurbanguly Berdymukhamedov was expected, though he bailed at the 11th hour, saying he would stay home to celebrate his birthday next week.

In the last decade or so, the Putin administration has made the orange-and-black St. George remembrance ribbon an almost obligatory accessory on this hallowed anniversary. A czarist-era decoration resurrected to honor veterans after World War II, it has become increasingly politicized since being adopted by Russian-backed separatists in eastern Ukraine in 2014. Some of Russia’s neighbors bristle at its colonial overtones.

Kazakhstan's president pointedly not wearing St. George's Ribbon, probably wise given the orange-black ribbon was created originally for empire-builders fighting Muslim Turks and how Putin said just a few days ago that ex-Soviet nations had been merely been "gifted" their land pic.twitter.com/iwHnSxKaqW

Though the Kremlin photographer documented Tajik President Emomali Rahmon sticking to Putin for much of the afternoon, some Russians didn’t recognize the man who has led the former Soviet Union’s poorest country for 27 years. 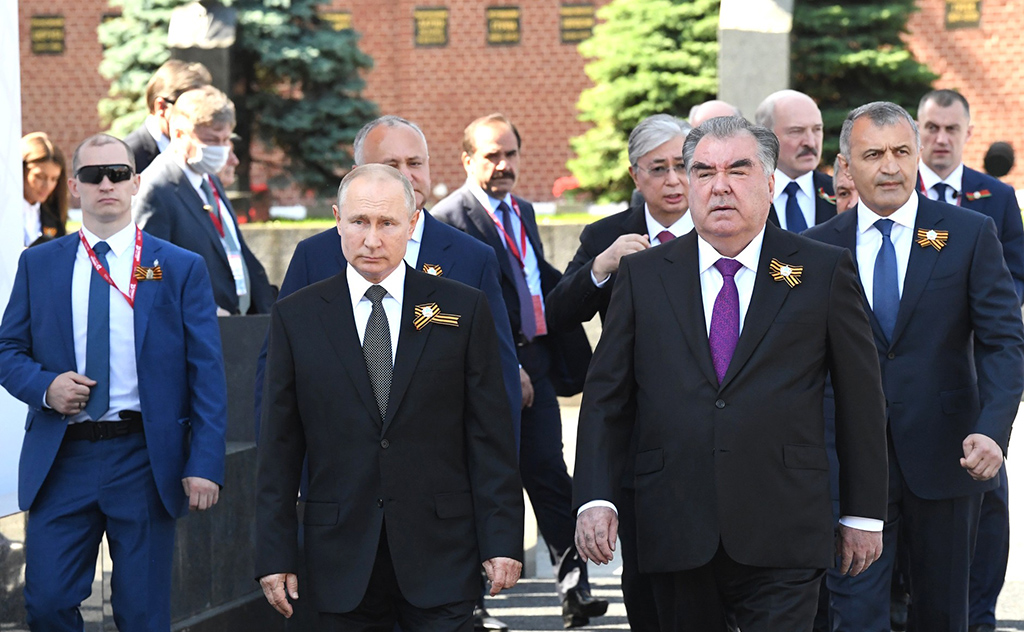 Uzbekistan’s President Shavkat Mirziyoyev made time for some socially distanced glad-handing on his brief trip to the Russian capital. He laid flowers at a statue commemorating his strongman predecessor, Islam Karimov. And his press service published these photos under the headline, “The president met with compatriots.”