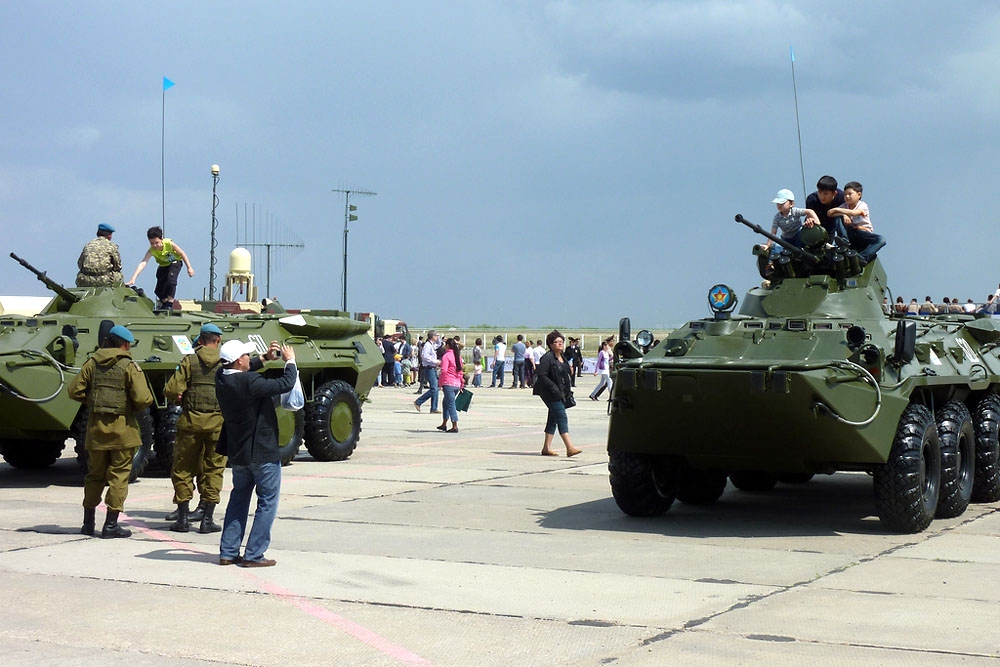 With the organization of its first defense exposition, Kazakhstan's Ministry of Defense is making a significant push to expand its sources for military hardware beyond its traditional supplier - Russia. But questions remain about how serious Kazakhstan is about westernizing its military, and if such a move is more cosmetic than substantive.

Kazakhstan’s military relies on largely decrepit, Soviet-era heavy equipment, and its defense budget is still, by global standards, paltry: In 2010, the country budgeted $60 million for procurement of new equipment. However, when the world financial crisis ends and with oil revenues expected to increase significantly over the coming 10-15 years, Kazakhstan has laid out ambitious plans to modernize its armed forces.

That business potential attracted many of the world's top defense contractors to KADEX, Central Asia's first defense exposition, held May 26-29 in Astana. Among the exhibitors were Israeli Aerospace Industries, Elbit and Israeli Military Industries, all from Israel. Also present were the US's Raytheon and General Dynamics, Turkey's Aselsan and Roketsan, France's Thales and MBDA, Italy's Finnmeccanica, China's NORINCO and South Korea's Samsung.

Among the country's top military acquisition priorities are improving the firing accuracy of its artillery; modernization of tanks, other armored vehicles and helicopters; buying new unmanned drone aircraft; ships for its nascent navy; and computerized command-and-control systems, said Kazakhstan's Deputy Defense Minister Talgat Zhanzhumenov, in a speech May 26.

And when they do business with foreign military contractors, Kazakhstani officials aim to do so with a wider variety of countries than they do now. “Military-technical cooperation with developed countries is becoming more and more important,” Zhanzhumenov said.

“They're trying to be more international, you see that they're chairman of the [Organization for Security and Cooperation in Europe], the first post-Soviet state to do that,” said Victor Jackovich, a former US diplomat now working for General Dynamics. “They're interested in diversification of suppliers, not only military but just in general. So there is kind of a political opening and part of it is probably following that. It's part of their sovereignty.”

Representatives of many of the foreign companies at KADEX said it was their first foray into Central Asia. They expressed interest in seeing what opportunities might exist. “We are here for market survey for the moment, what opportunities there are in the future. Kazakhstan is the front-runner in Central Asia,” said Thomas Korner, regional sales director for General Dynamics European Land Systems.

“We are neighbors and have good relations, we are both in the Shanghai Cooperation Organization,” noted Li Zimin, a marketing representative for the Chinese company NORINCO. “But now we are just in the beginning stage, trying to find some opportunities to cooperate.”

Russian officials acknowledged that the era in which they enjoyed a virtual monopoly over Kazakhstan's military hardware is over. “Frankly speaking, Kazakhstan is an independent country now,” said Esen Topoyev, a former defense minister of Kyrgyzstan and now an executive at Rosoboronexport, the Russian state defense export company. “We have no instrument to press them with. ... It's an [open] competition now.” Topoyev added, though, that Rosoboronexport provides its products at a discount to members of the Collective Security Treaty Organization, such as Kazakhstan.

The bulk of Kazakhstan's hardware is likely to remain Russian for an indefinite period, most officials agreed. “We need more time to pass to see the entire picture. But my guess is, at the end of the day, the systems that are critical for the defense of the country will come from 'big brother,'” said one foreign exhibitor at KADEX, who asked not to be named.

Different elements in Kazakhstan’s Ministry of Defense feel differently about the need to westernize the military, said Jacob Gadot, executive vice president of international marketing and business development for Elbit. “I think even they are divided,” he said. “People have graduated with Soviet equipment; there are very strong ties [to Russia]. This is a process. Maybe they will change over a very slow, a very gradual process.”

Kazakhstan does genuinely want to move at least partly away from its full reliance on Russia, said another KADEX exhibitor who spoke on condition of anonymity. “They would like to be balanced, between Russia, China and the western world. It's very smart – they will get ships from Korea, radios from France, air defense from Russia. It's very smart, not like Georgia who goes just into one camp,” the executive said.

What seems most likely is that a small part of the military, intended for operations abroad, will be westernized. Kazakhstan is developing a peacekeeping/expeditionary brigade, KAZBRIG, and authorities will want that unit to be able to operate well with the western militaries with which it will cooperate in those ventures.

“When they go out in the future in peacekeeping operations, in Afghanistan for example, they will be looking for interoperability with the existing forces, where you see more Western products,” said General Dynamics' Korner. “So we think, even in small numbers, we will be ready to assist their future peacekeeping operations.”

Vincent de Raucourt, Thales's director for Central Asia, added: “Kazakhstan is operating in some international operations and they want at least some part of their armed forces to be able to work with NATO and Western militaries.”

Many foreign defense contractors said that doing business with Kazakhstan is complicated by the Ministry of Defense's opaque decision-making process, and the fact that the priorities seem to change with every new defense minister.

One exhibitor cited Kazakhstan's most high-profile deal with a non-Russian country, an agreement to buy new artillery systems from Israel, noting that it did not seem to make sense in terms of the threats Kazakhstan faces. “When you have artillery and rocket systems, that is because you have a threat of heavy armed forces. And they're afraid of China, but not of an invasion, just economically. And there is a threat from the South, but that is terrorism. So why artillery? It was not based on a threat analysis – maybe the guy in charge was a former artillery guy?”

Joshua Kucera is a Washington, DC,-based freelance writer who specializes in security issues in Central Asia, the Caucasus and the Middle East. He is the editor of EurasiaNet's Bug Pit blog.