A Kazakh mother who fled China to save her unborn child now fights to free her husband from the Xinjiang gulag. 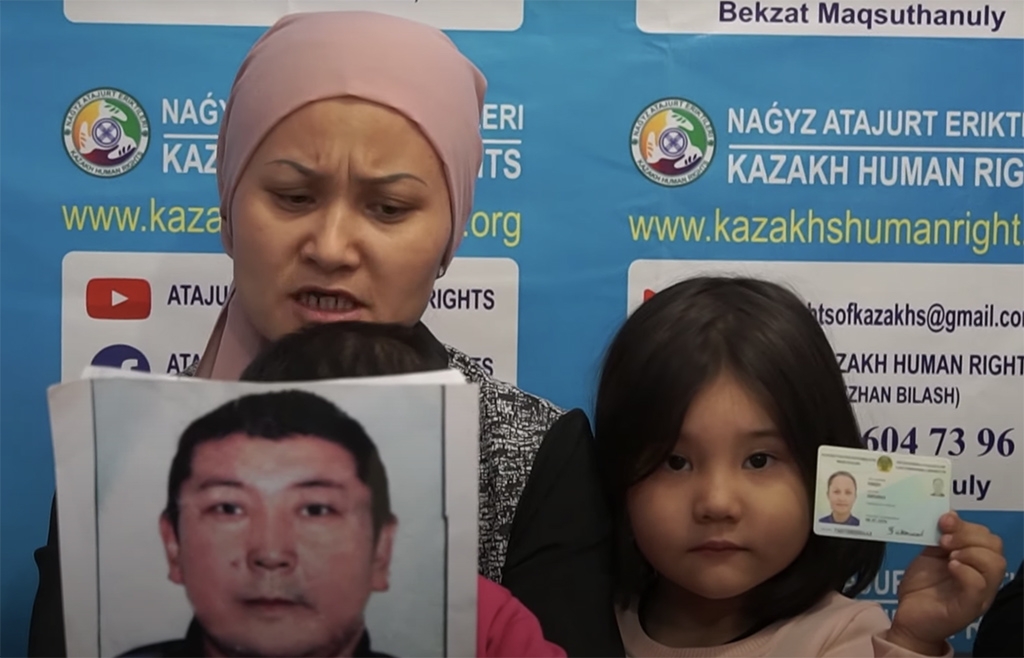 Today 43-year-old Bikamal Kaken struggles to raise her three small children alone in a rented home in Kazakhstan. Her husband, Adilgazy Muqai, once provided for the family. But three years ago, Muqai left home for what the couple thought was a routine business meeting in their old hometown in China. He never returned.

Muqai is a victim of China’s ongoing crackdown on ethnic minorities in Xinjiang province, which has led to the extrajudicial detention, imprisonment and disappearance of hundreds of thousands of people since 2017.

Kaken and her husband are Kazakhs, one of the Turkic minorities which together comprise the majority of Xinjiang’s population. They lived in Karamay, an oil town where Muqai worked in the local oil industry for two decades. “I looked after our children and cared for my mother-in-law who was over 90,” Kaken says.

By 2016 official restrictions on cultural and religious expression increasingly intruded upon the family’s life. Members of the “neighborhood committee” – usually ethnic Han Chinese – would patrol minority neighborhoods in Karamay and enter homes to enforce new regulations. Kaken was once harassed for wearing a headscarf, seen by the Chinese authorities as a sign of religious extremism: “I told them I was not wearing the scarf for religious reasons but to follow Kazakh tradition. I had to wear it while being around my mother-in-law, but they didn’t accept this.” Not wanting trouble, Kaken and her family tried their best to cooperate. “The cadres would stay in our houses as [if they were our] relatives. We treated them politely, we welcomed their visits,” she recalls. “We did not protest against any of the government policies.”

As 2016 progressed, the visits began to take a more sinister turn. Inspectors started noting the number of children in each household. The couple began to hear reports of minority women being forced to abort unborn children. This news deeply troubled Kaken, who was then pregnant with her third child. The couple decided to relocate across the border to Kazakhstan with their children. Muqai had already officially retired from his job that year due to a medical condition. The family applied for and received permanent residence in Kazakhstan, which is not hard for ethnic Kazakhs from neighboring countries.

“We would have liked to sell our house first,” she remembers, “but we thought it was best to leave as soon as possible.”

Kaken and her family moved in August 2016. For the first year the couple faced no difficulties and Muqai was even able to visit his relatives in Xinjiang several times without incident. Then one night in May 2017, Muqai received a message from a former co-worker who told him that his presence was required at an important company meeting in Karamay. If he did not attend, his pension would be withheld.

“My husband didn’t have any fears leaving,” Kaken remembers. “We were not aware then that innocent people were being detained […] My husband’s main concern was about losing his pension, which was our only livelihood.”

After being informed by her in-laws that Muqai had not arrived, Kaken called the bus driver – an acquaintance whose services Muqai had used often when traveling to China. The bus driver told Kaken that her husband had been stopped by Chinese police near the border and taken away. The bus driver said that he had waited for some time, but Muqai did not re-appear and he continued on without him.

For the next two years, Kaken’s only news of her husband came from messages her in-laws in China managed to pass to her through acquaintances. She learned that he was being held in a re-education camp in Karamay; the police had dropped off his travel bag at his sister’s house a few days after his arrest. Eventually Muqai was allowed a family phone call. “I might die soon,” he told his sister on the phone.

“I don’t know why he said that,” says Kaken, “it may have been because of his health condition, or maybe he thought he would be killed.” Later the family learned from a former detainee that Muqai had been moved to a camp in Maytag, a district in Karamay.

After her husband’s disappearance, Kaken gave a number of interviews to journalists, including Berlin-based writer Ben Mauk, who included her story in a series of accounts for The Believer last year. This June, her story caught the attention of Zhang Xiao, China’s envoy in Kazakhstan. Speaking to the Global Times, a Chinese Communist Party mouthpiece, Zhang incorrectly referred to Mauk’s work as sponsored by the United States government, asserting that it was “an old trick for the U.S. to use amateur ‘actors’ to play victims.” Zhang claimed that Muqai had in fact been sentenced to prison for nine years in December 2019 by the Intermediate People's Court in Karamay for “encouraging acts of extremist terrorism and disturbing the region's social order.”

Zhang denied that Muqai had ever been held in a re-education center, or that the couple had been fined for having more than two children (a claim Kaken did not make in her account). The ambassador offered no explanation for Muqai’s whereabouts between the summer of 2017 and December 2019.

Kaken balks at these claims. “My husband was never involved in any wrongdoing,” she said by telephone from Uzynagash, a village about an hour from Almaty. “If he was really a terrorist, how was he able to travel back and forth from China until May 2017? Why was he allowed to leave China at all?”

Kaken wonders if the headscarf incident years ago had something to do with the charges. According to Human Rights Watch, such charges are routinely brought by the Chinese authorities to punish a wide range of offenses of a religious nature – such as wearing overtly religious garb – offenses often committed years in the past. Kaken believes her husband was targeted by Chinese authorities because of the couple’s travels to and from Kazakhstan and the birth of their child in that country, in an apparent attempt to evade China’s coercive birth control policies against ethnic minorities.

For Kaken, her husband’s secretive trial and sentencing further undermines the charges. “If my husband really was a criminal,” she says, “why did they not send me, his official wife, any information about his arrest? There was no detention notice, no trial judgment. For two years, I sent many letters of appeal. They knew I was looking for him.” In fact, Zhang’s statement in the Global Times, shown to Kaken by an activist, is the only information Kaken has ever seen from the Chinese government concerning her husband’s fate.

While Muqai, incarcerated and in poor health, is never far from Kaken’s mind, she is nonetheless thankful to live with her three children in Kazakhstan. “I don’t think my youngest daughter would have been born if I remained in China,” she says. “There are good people here who help me. Some bring groceries. Some help with the rent. Without them I could not survive.” Many of these donors learned about her from Atajurt, a Kazakhstan-based rights group dedicated to recording and publicly reporting the stories of victims of China’s crackdown in Xinjiang, despite increasing pressure from Kazakh authorities not to sour relations with the giant neighbor.

Kaken continues to speak to journalists and rights activists: “The goal of the Chinese Communist Party is not to fight terrorism. Their goal is to destroy the ethnic minorities in Xinjiang. I want the world to know about what they are doing to us.”