Talish has become a cause célèbre with Armenians both in the region and in its wealthy diaspora. 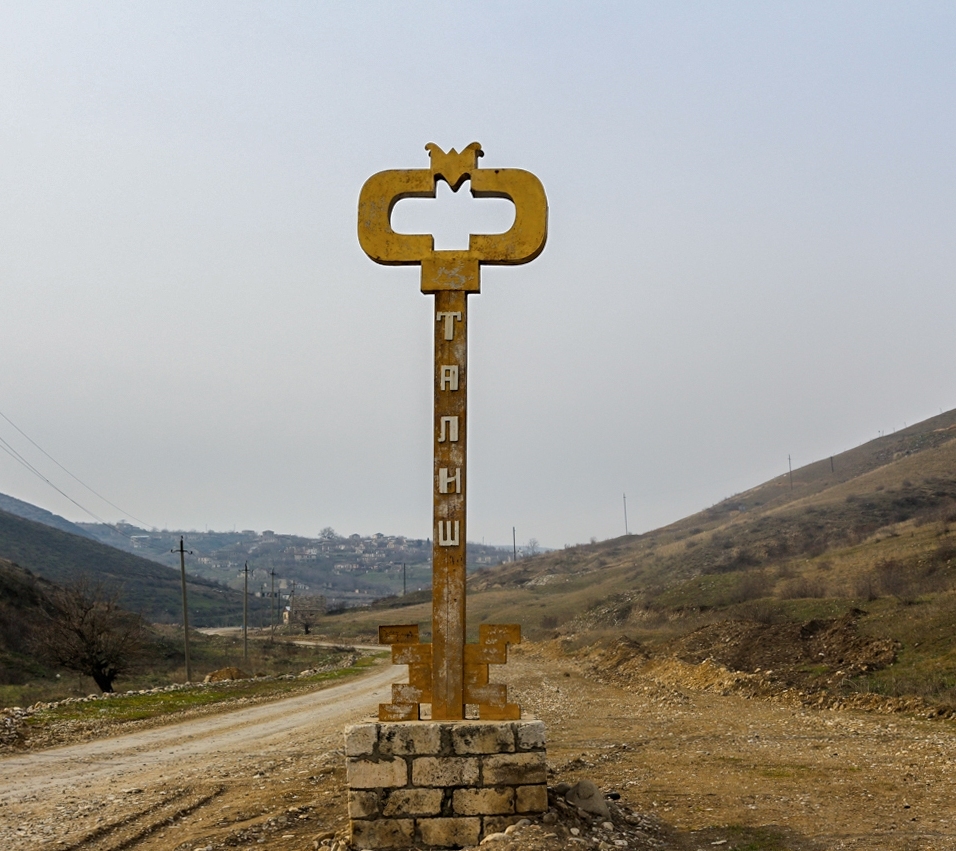 A monument leading into the village. (All photos: Armine Avetisyan)

Two years ago, Azerbaijani troops entered the village of Talish, less than a kilometer from the line of contact separating Armenian and Azerbaijani forces in Nagorno-Karabakh. In the fighting that ensued, Armenian forces managed to beat back the advance, but the village of about 540 residents – all ethnic Armenians – was virtually destroyed.

While some of Talish's men stayed behind to fight, all the women and elderly were evacuated. Agnesa Ohanyan, 81, says she was the last woman to leave the village. And late last year, she became the first woman to return.

“I couldn’t resist, missed my home and my bed. I wanted my Talish,” Ohanyan told Eurasianet from the yard of her newly rebuilt home. “There is no better place in the world than my house.”

Talish was the only inhabited area to see fighting in what has become known as the “Four-Day War” or the “April War,” the worst outburst of violence in Karabakh since the two sides signed a ceasefire in 1994. Since then, Karabakh – including Talish – has been controlled by the Armenian armed forces and an unrecognized, Armenian-controlled government.

Now, Talish has become a cause célèbre with Armenians both in the region and in its wealthy diaspora. The financing of the reconstruction has been shared by the de facto Karabakh government and the diaspora-run “Hayastan” All-Armenian Fund. The fund, via a donation from prominent Armenian-American philanthropist Antranig Baghdassarian, has paid $5 million toward the reconstruction. A spokesman for the de facto government declined to provide Eurasianet with details on government financing.

So far, 17 houses and an events hall have been reconstructed, and the water system totally renovated.

“Our house is completely new and beautiful, but I regret that I am alone, that my neighbors are not here to have a cup of coffee together, to talk,” Ohanyan said. “I dream that soon the village will be reconstructed, there will be a final peace and we will live a quiet life.”

Further reconstruction plans include 25 additional houses and rebuilding curbs and sidewalks with decorative bricks, new streetlights. A new school and kindergarten are scheduled to open in September for the beginning of the school year. The de facto Ministry of Agriculture has developed a program to boost the region's economy, including supplying new farm equipment.

But not everything is being rebuilt: The houses closest to the line of contact with Azerbaijani forces are going to remain in ruins. “They are on the frontline and visible by the enemy, so they won't be rebuilt or inhabited,” said Vilen Petrosyan, the village's mayor.

Talish isn't only on the literal battlefield, but in the virtual one as well. The Armenian government and media have heavily promoted the reconstruction. Karabakh’s de facto president Baho Sahakyan visits Talish regularly to oversee the construction works. At a June 2017 unveiling of a new monument called “Revived Talish,” Sahakyan called the reconstruction a “significant state strategic program.”

As such, the village has become the source of conspiracy theories from Azerbaijan. In January, the Azerbaijani Ministry of Defense alleged that the Talish reconstruction was a sort of hoax, “intended for the domestic audience and are part of the propaganda on the eve of the upcoming presidential election.” The MoD claimed that the much-hyped reconstruction was being done “in another area, far from the front line,” the news agency APA reported.

There were rumors in Armenia, following the 2016 war, that Talish might become a bargaining chip with Azerbaijan, said political scientist Gagik Hambaryan. And some former residents remain afraid to go back, fearing that they will be subject to attack again. But the security of the village has taken on substantial political significance for Yerevan, Hambaryan said: “If suddenly the danger hanging over Talish increases and it happens because of the Armenian authorities, the public will not forgive them.”

“Talish is the Armenian Stalingrad,” he added.

“Our society more or less accepted the loss of 800 hectares with understanding,” Hambaryan said, referring to Azerbaijan gaining control of territory around the area of Lala Tepe, the first significant territorial shift since the 1994 ceasefire. “But the president who loses a settlement, especially if it has strategic importance like Talish, will lose people's confidence.”

Armine Avetisyan is a freelance journalist based in Yerevan.