On the Nagorno-Karabakh Frontlines 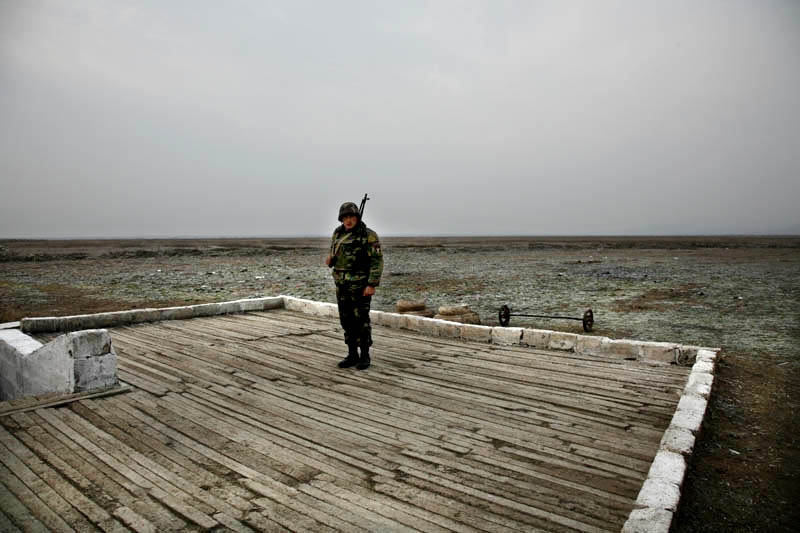 A Karabakhi draftee from Stepanakert stands on guard near the front line with Azerbaijan. (Sophia Mizante) 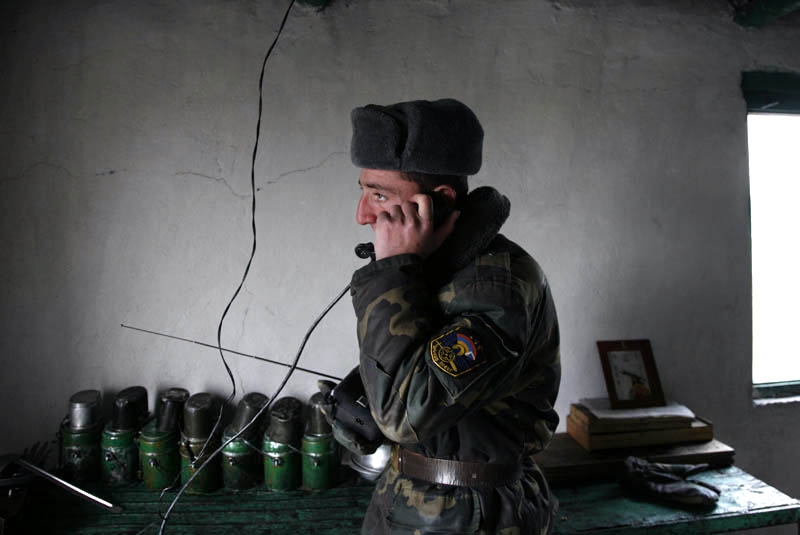 Zarza Gazarian, a 19-year-old draftee from Stepanakert, talks on a military field telephone inside a bunker. (Sophia Mizante) 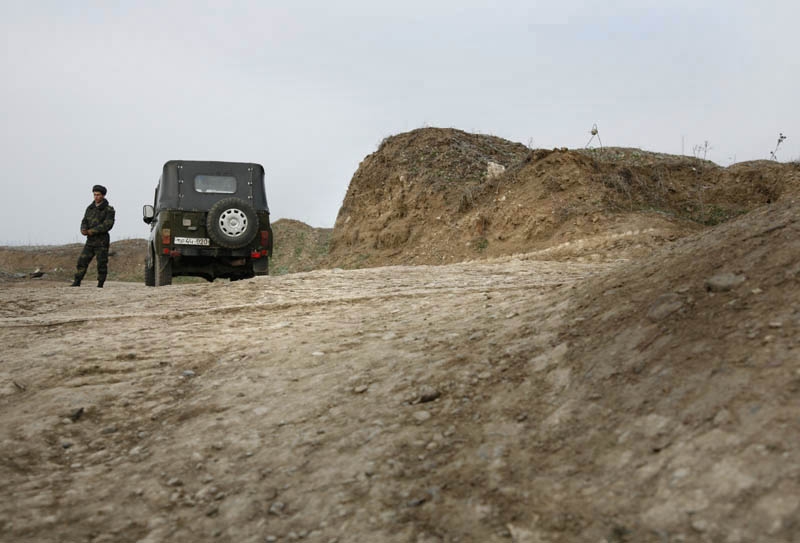 Saro, a 19-year-old draftee from Stepanakert, waits near his military jeep near the front line. (Sophia Mizante) 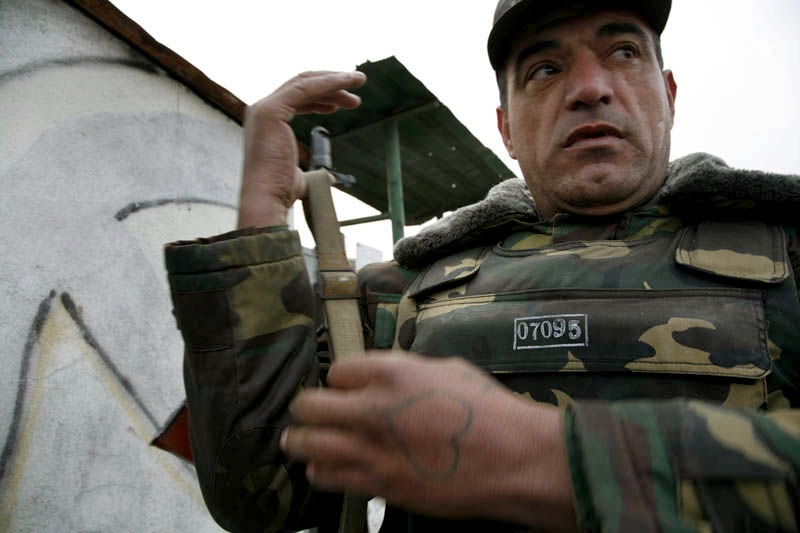 Anatolij serves as an officer with the Nagorno-Karabakh army. (Sophia Mizante) 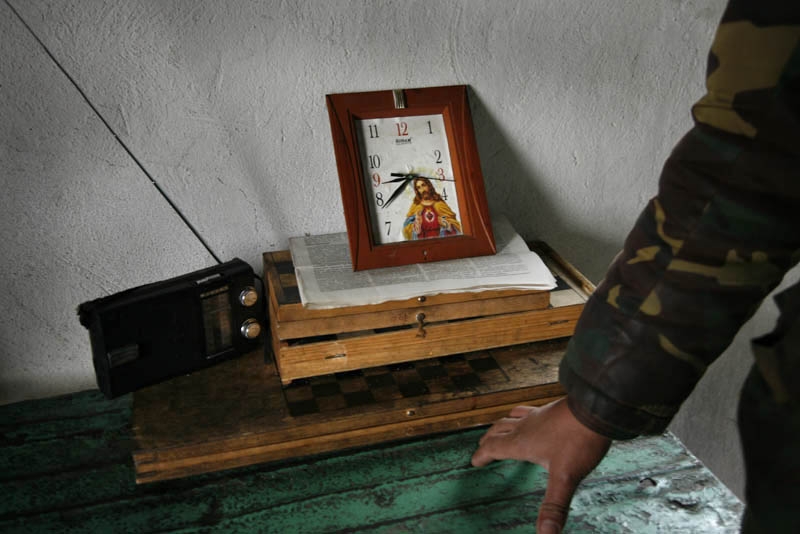 A picture of Jesus, a chess board, a radio and a newspaper bedecks the table in a soldier's bunker. (Sophia Mizante) 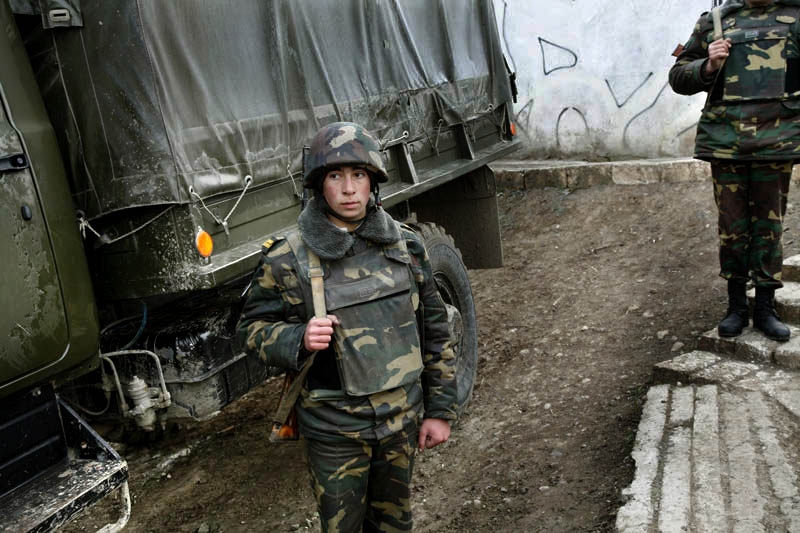 Zirar, an 18-year-old draftee from Stepanakert, waits with other recruits at a protected military compound. (Sophia Mizante) 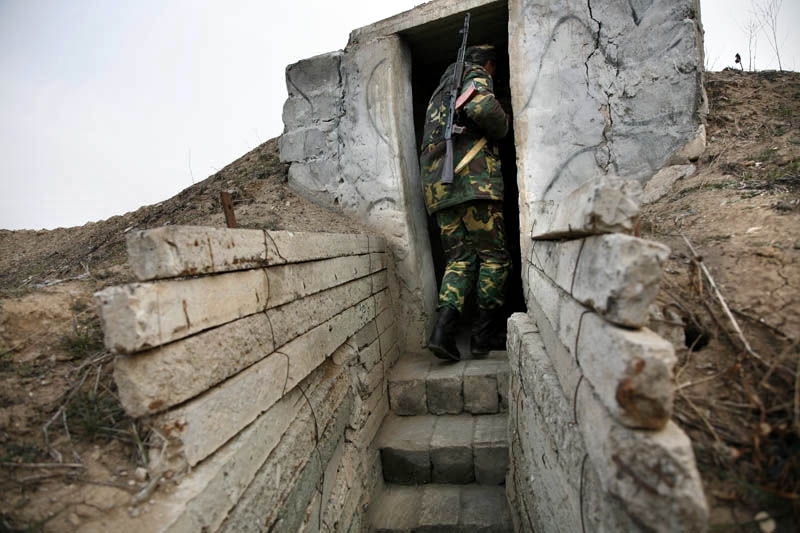 A soldier enters a protected bunker from a trench line. (Sophia Mizante) 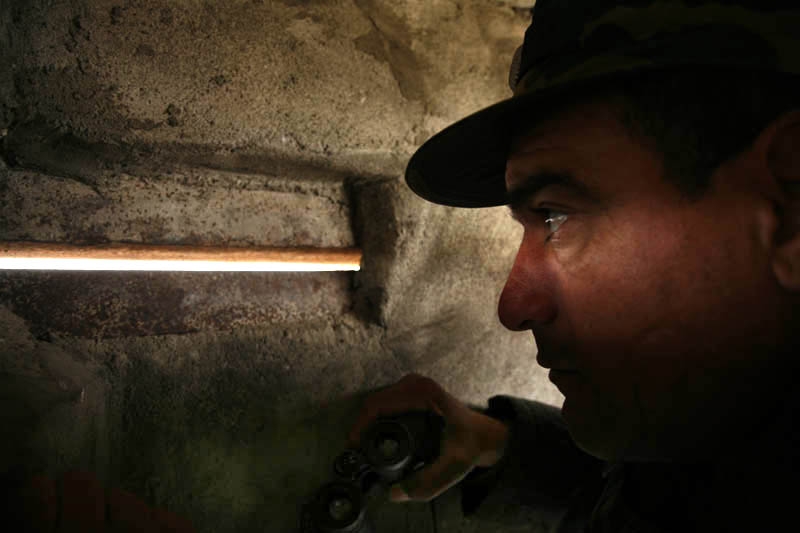 Anatolij peers through a slit in a bunker at the Azerbaijan troop positions. (Sophia Mizante) 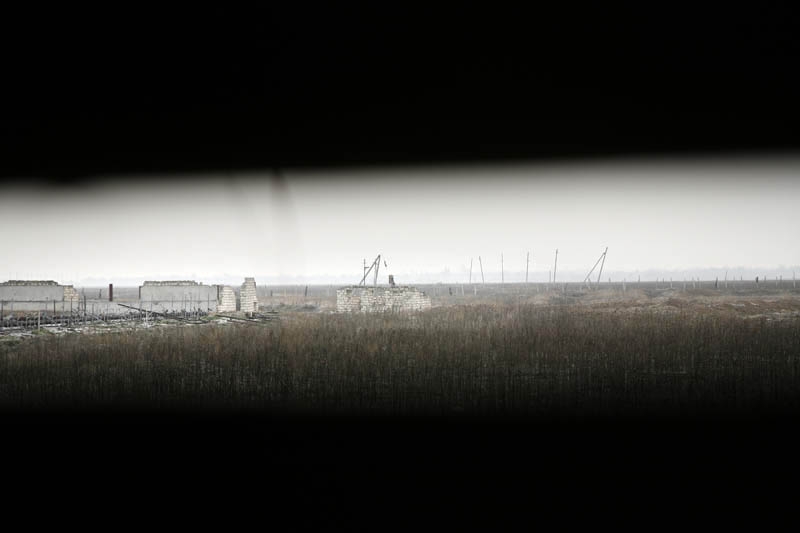 Shattered buildings and debris can be seen between the front-line positions of the two conflicting sides. (Sophia Mizante)
prev
next

Recent announcements by Azerbaijan and Armenia have spurred hopes that a Nagorno-Karabakh peace settlement is within reach. But on a windswept Karabakh military post northwest of the disputed territory’s capital, Stepanakert, the struggle over this self-declared state seems far from over.

At this position, roughly 300 to 400 meters from the Azerbaijani lines, exchanges of gunfire are a daily occurrence, soldiers said. A seven-person unit that is refreshed every seven days mans the post. An Azerbaijani sniper recently killed a Karabakhi soldier not far from here.

In a recent tour of the frontline organized for international journalists by Nagorno-Karabakh’s de facto Ministry of Foreign Affairs, officers were reluctant to discuss their views on the ongoing Karabakh negotiations, and on the potential impact of a settlement on the separatist government and military they serve.

"That’s for the politicians," said one army representative, a veteran of the 1988-1994 conflict with Azerbaijan who gave his name as Artur, when asked to comment about recent announcements of a breakthrough in the negotiations. "The military doesn’t mix with politics. Nor should we, right? We’ll do what we’re told."

The size of the Karabakh army is "a state secret," officials say, and information about the defense budget is not readily available. A 2005 report by the International Crisis Group, however, cites an unnamed official in Nagorno-Karabakh’s Yerevan mission who stated that the army has 20,000 soldiers. Another source cited in the report, a US military expert, put the number at 18,500 soldiers.

Along with military hardware, Armenia is thought to provide some of the troops in Karabakh defense force. Former Armenian conscripts interviewed by Crisis Group in Yerevan reported that they had been sent to serve in Nagorno-Karabakh.

Conscripts serving at the frontline post, a bleak collection of trenches, observation hut, one-room office and one-room living quarters, asserted that they came from Nagorno-Karabakh, adding that they were there "to serve the homeland." A clock with a large image of Jesus dominates the office visually, standing across from a Russian-language wall poster describing how to fight tuberculosis.

"This isn’t the American army," one defense ministry representative on hand for the tour commented with a laugh about the stark scene. "This is the Karabakh army. They have to be tough."

Young men in Karabakh are required to serve two years of military service. The government says conscripts are paid 3,000 Armenian drams per month (about $6.83) for "extras." Army representatives detailed a long list of food items - including first and second courses, salad and soup for dinner -- reportedly brought in to feed frontline soldiers daily -- and, indicating one particularly bulky conscript, claimed that they’re fed meat each day.

An academy "with a military inclination" exists in Stepanakert, but students who wish to serve as officers in the Nagorno-Karabakh army do their training in Yerevan, army representative said. Plans exist, however, to open a more formal military academy in Karabakh, where students would be taught, "as in Tsarist Russia," foreign languages and ballroom dancing along with their regular course of study, he said.

Twelve years after the cease-fire agreement that ended the 1988-1994 war over the territory, ruined houses and other buildings still dot the landscape outside of Stepanakert. The military did not allow photos to be taken, but the images seen suggest a conflict indelibly engraved in residents’ minds.

The economy appears to be recovering slowly, but independently verifiable economic data is unavailable. At a December 6 plenary parliamentary session, de facto Minister of Economy and Finance Spartac Tevossian reported that Karabakh’s Gross Domestic Product expanded by 20.8 percent for the first nine months of 2006, as compared with the same period in 2005, reaching $97.4 million, the Armenian news bulletin service De Facto reported. Monthly salaries average around 36,605 Armenian drams, or about $83.38, the minister claimed.

Primarily an agrarian society, Karabakhis are returning to cultivating vineyards and wheat fields. A gold mine opened in 2002, and construction projects - including a new parliament building and adjoining hotel - can be seen throughout Stepanakert, often financed by diaspora Armenians. The separatist leadership is also putting increased emphasis on tourism: The government claims that in 2006 some 3,750 foreign tourists visited this rugged region, prized among Armenians for its monasteries and churches, and that the number of such visits is steadily increasing.

Security concerns remain foremost in Karabakhis’ minds. Interviewed residents routinely cited maintaining an adequate defense against Azerbaijan, which formerly controlled Nagorno-Karabakh, as their territory’s largest problem. Many cast a doubtful eye on the return of the seven territories surrounding their region to Azerbaijani control.

"If Armenia frees those territories, without a doubt, then, Azerbaijan should take reciprocal steps and recognize our independence or, in the worst case, recognize our right to a free choice," commented Vahram Atanesian, chairman of the Nagorno-Karabakh parliament’s foreign affairs committee. "We went toward independence because it was the best way to guarantee our security."

While war veterans, refugees from Azerbaijan and long-term residents interviewed by EurasiaNet all spoke out strongly against any resumption of armed hostilities with Azerbaijan, feelings were mixed about the return of Azerbaijani refugees to this predominantly ethnic Armenian land. The government of Azerbaijan has insisted on such a right of return as one of the conditions for a lasting peace resolution with Armenia.

"There’s no chance we can live together now," said octogenarian Areg Oganisian, an Azeri-speaking ethnic Armenian refugee from the Azerbaijani town of Sumgait who returned to his family village outside of the Karabakhi town of Shushi after the 1988 pogrom against Armenians in Sumgait. "But I also can’t say that all Azerbaijanis are bad. They are civilized, too . . . . If it hadn’t been for Sumgait, we could have worked things out, but Sumgait was a detonator."

"We took Karabakh by blood," said a Karabakh war veteran, who gave his name as Artur. "How will there not be a war if Azerbaijan tries to take it back?"