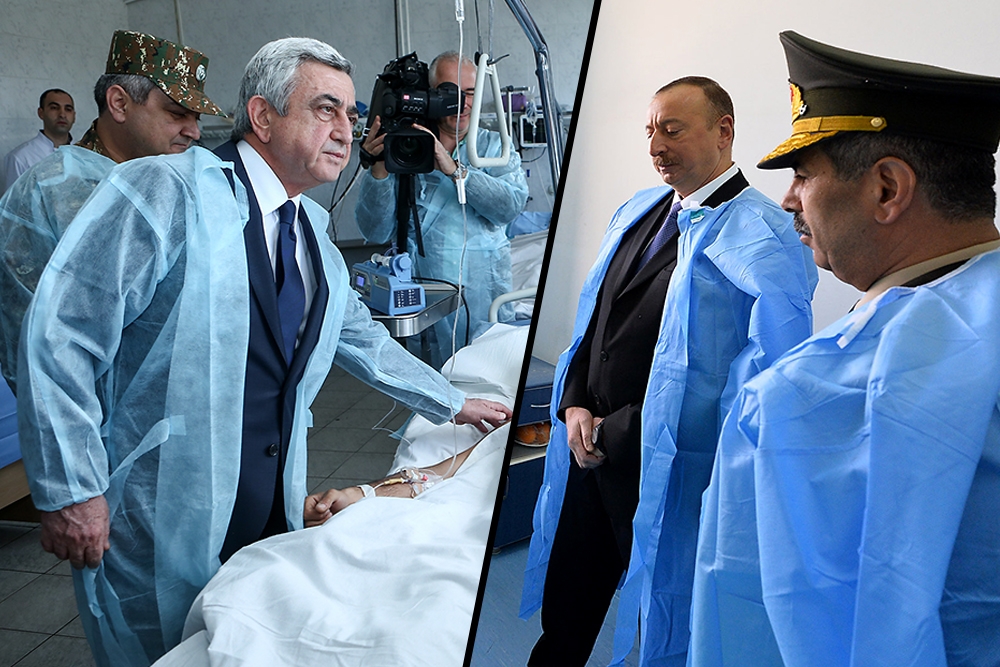 With military personnel and video cameras in tow, the presidents of Armenia and Azerbaijan visit military hospitals to meet with soldiers wounded in the fighting along the border of Nagorno-Karabakh. (Photos: Armenian and Azerbaijani Presidential Press Services)

When the deadliest fighting in decades broke out in Nagorno-Karabakh in early April, Armenians, Azerbaijanis, and the rest of the world struggled to figure out what was going on. Did Azerbaijan, as it claimed, really seize villages and strategic heights? Were there really hundreds of casualties on each side? How did the fighting start?

In any conflict, the fog of war makes it difficult to sort out truth from propaganda. But the situation in Karabakh is especially murky because so few independent observers are able to monitor the shaky ceasefire that has been in place since 1994.

A monitoring mission from the Organization for Security and Cooperation in Europe (OSCE) includes only six observers, including Ambassador Andrzej Kasprzyk, who has headed the mission since 1996. Further, the monitors are not based in the region and must announce their visits to the line of contact separating Armenian and Azerbaijani forces in advance. OSCE monitors have not been able to visit the scene of the most recent fighting because of security reasons, Kasprzyk said.

“Monitoring visits to any areas affected by clashes on the [line of contact] are not possible at this very moment, though we are trying to organize these … to take place as soon as the situation allows,” Kasprzyk said at a Tuesday meeting of the OSCE Permanent Council. “The sides are responsible for creating the necessary security conditions. … My office, with my mandate and the resources it has, can only play a limited role in conflict prevention and assist when there is a need for it.”

By contrast, the OSCE monitoring mission in eastern Ukraine, covering a smaller territory than Karabakh, totals close to 700 monitors. A European Union mission monitoring the ceasefire in Georgia around the breakaway republics of Abkhazia and South Ossetia includes about 200 monitors.

The blame lies not with the OSCE itself but with the parties to the conflict, who have a veto over changes to the monitoring regime, most analysts contend. “Russia has an interest in at least the veneer of acquiescence” with an international monitoring regime, said one military officer with peacekeeping experience in the Caucasus, who asked not to be named, explaining the more robust missions in Georgia and Ukraine. In Karabakh, “neither side wants it.”

“For all intents and purposes, there is no monitoring,” said Sabine Freizer, a senior fellow at the Atlantic Council who studies the Caucasus. “With such little monitoring,” she added, “it’s surprising there haven’t been more violations.”

Effective monitoring is made even more difficult by the rough terrain, remoteness, and particular topography of the line of contact, with trenches dug in and the two sides separated in some places by only 200 meters. “It’s not easy to drive down the middle of that,” the military officer said. “This is really a ceasefire that’s completely unmonitored by anybody.”

The OSCE monitoring in Karabakh was relatively successful while the conflict remained relatively frozen, with a static line of contact and only sporadic small arms fire. “Until about three to five years ago, the ceasefire had been self-enforcing,” said Richard Kauzlarich, a former US ambassador to Azerbaijan and currently an adjunct professor at the School of Public Policy, George Mason University. “When the exchanges began to graduate to sniper fire, efforts by special forces to cross the line of contact, and the use of heavy weaponry, it was clear that a more robust independent monitoring would be necessary.”

There have been proposals to bolster the monitoring mission, including a greater number of monitors and setting up electronic sensors that could track ceasefire violations. That approach has been supported by the US State Department and Armenia. At a meeting of OSCE member state ambassadors to Yerevan on April 4, Armenian President Serzh Sargsyan repeated his call for an increased OSCE presence, including “the introduction of [a] ceasefire violations investigation mechanism, and a more robust monitoring mandate.”

But Azerbaijan opposes it on the grounds that it would solidify what it deems an occupation of its territory by Armenian forces. “With some 14 percent of its territory occupied, Baku has no interest in keeping the situation frozen along current dividing lines. In Yerevan and Stepanakert, there is much more support for reinforced monitoring to increase local security,” Freizer said.

Given the lack of political will for more official monitoring, Freizer suggested that informal civilian monitoring, bolstered by social media, could fill some of the gap. “Especially in this region, where information tends to be the monopoly of the state, independent monitoring and reporting is extremely rare – but also essential,” she said.