Nagorno-Karabakh: Who Won the Media War? 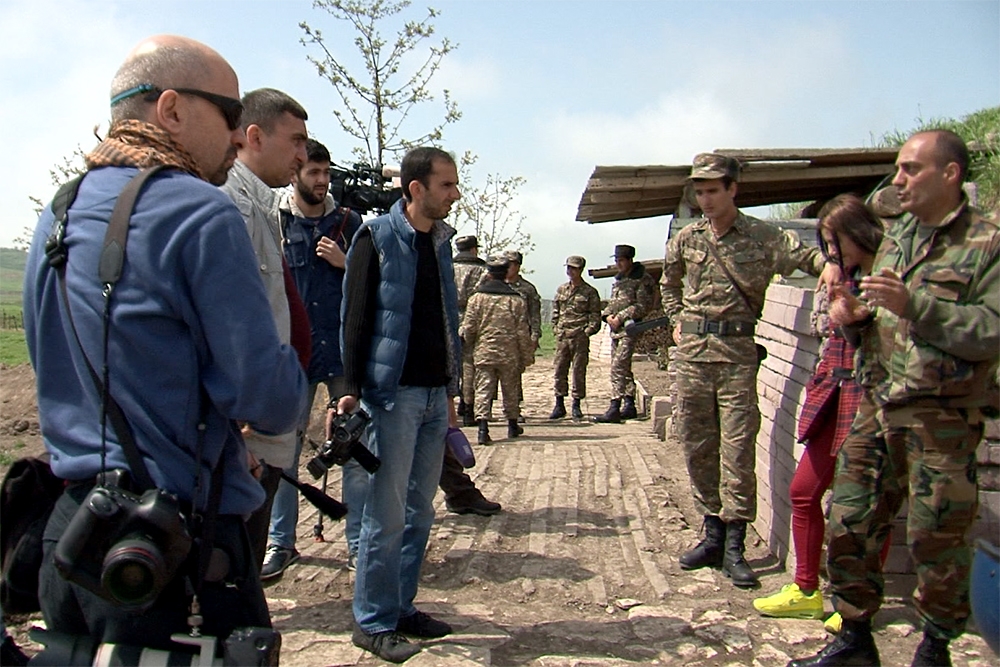 A separatist military official addresses journalists during a media tour of frontline positions on April 8 in the Martuni region of Nagorno-Karabakh. (Photo: EurasiaNet)

Azerbaijani and ethnic Armenian forces battled in early April not just over territory, but also for control of the international media narrative about their 28-year-long struggle over the breakaway region of Nagorno-Karabakh.

The Karabakh conflict has simmered and bubbled for the past 22 years, but generally has escaped the attention of mainstream international reporters. That all changed on April 2-5, with the worst outbreak of violence since a 1994 ceasefire.

The ability of journalists to cover the conflict, though, varied markedly.

Each morning, de-facto Karabakhi defense and local officials offered reporters escorted trips to frontline villages, such as Talish or Martuni. It was “like a menu in the restaurant, but with only one dish,” quipped Gegham Vardanian, editor-in-chief of a media-monitoring site for the Yerevan-based Media Initiatives Center.

On the other side of the divide, journalists found it tougher going. Azerbaijan maintains a strict policy of controlling media access, especially to areas close to the frontlines. It also has a history of denying visas to journalists who previously have traveled without Baku’s consent to Karabakh, or the seven surrounding territories held by Armenian and Karabakhi forces.

In an April 12 statement, Azerbaijan’s Ministry of Foreign Affairs interpreted this policy of assisting foreign media as an Armenian attempt to “deceive the international community and divert the focus from the political-legal liability they carry for the subversive and provocative actions of the Armenian armed forces.”

Baku boasts considerable experience hosting international media spectaculars, including the 2012 Eurovision Song Contest and the 2015 European Games. Yet, a representative of one international media outlet who managed to cover the conflict from the Azerbaijani side found the government’s press management skills during the Karabakh flare-up to be lacking. Speaking to EurasiaNet.org on condition of anonymity, the journalist described a grueling, rapid-fire press tour that took journalists from Baku to the frontline as “shambolic.”

“The international journalists there [in Karabakh] found themselves being filmed as much as doing the filming,” the journalist said. “Azerbaijani TV crews were making a story about us.”

Daylight was fading by the time cameramen stopped filming at the first location, he continued. “And by the time we'd driven two or more hours to the next place, it was pitch black. Not great for TV cameras.”

Some journalists who entered Azerbaijan were detained or deported. Security officials in Azerbaijan’s Goranboy region held and questioned a television crew from Georgia’s Rustavi2 for several hours because they did not have accreditation. After intervention by Georgian and Azerbaijani diplomats, the crew was able to continue reporting.

A group from Russia’s LifeNews channel, an outlet with allegedly close ties to the Russian security services, was not so fortunate. The crew was expelled for lack of accreditation and allegedly spreading claims, also featured in Armenian media, that Azerbaijan was using Islamic State terrorists against Armenian and Karabakhi forces.

Azerbaijani Foreign Ministry spokesperson Hikmet Hajiyev did not respond to a request for comment.

Karabakhi officials appear to have received outside help in managing scores of foreign and local journalists. Aside from the 1988-1994 war, the remote territory has limited experience with international media, and a local media scene (one TV station, one radio station, one newspaper, and a handful of websites) that is far from robust.

Aware of the obstacles, Samvel Farmanian, the English-speaking, former spokesperson for Armenian President Serzh Sargsyan, a Karabakh native, told EurasiaNet.org that he volunteered to help out. Although Armenia and Karabakh maintain close ties, Farmanian, now an MP for the president’s Republican Party, claimed that no one ordered him to go.

“It was a kind of self-nomination,” he emailed.

Armenian celebrities also turned up to rally support. Actress Nazeni Hovhannisian (whom Azerbaijani media incorrectly identified as a “female sniper”), theater singer Shushan Petrosian, and TV news satirists Narek Margaryan and Sergey Sargsyan were among those who made the six-hour trek from Yerevan.
Whether or not Azerbaijan made similar efforts could not be immediately determined. A march took place on April 6 in Baku.

While separatist Karabakh and Armenia may have been better positioned to feed the international media cycle, Azerbaijan was not without resources.

Michael Cecire, a regional specialist at Philadelphia’s Foreign Policy Research Institute, points out that Azerbaijan has its own sophisticated, strategic communications operations in Washington, DC, and Brussels. Over time, “the Azerbaijani perspective of events has tended to have the edge in the op-ed pages of many of the higher visibility international outlets,” he wrote in an email interview.

Three days after the April 5 ceasefire was announced, Azerbaijan agreed to pay its chief American PR consultants, the high-end, Washington, DC-based Podesta Group, an additional $70,000 for three months’ worth of “public affairs services,” according to papers filed with the US Department of Justice.

Since January, the Podesta Group has held a six-month-long, $300,000-plus-expenses lobbying contract with Azerbaijan.

Armenia does not have registered US lobbyists. Much of the push for its views on Karabakh comes via influential Diaspora organizations.

It remains to be seen whether the latest bout of fighting has raised international awareness about the unresolved Karabakh conflict. Until this month, Google searches in English for “Karabakh” were rare; nearly all of the searches came from Armenia and Azerbaijan, according to Google Trends.

Similarly, while the April fighting touched off “the most active social media outpouring” in the history of the 28-year-old Karabakh conflict, the impact was domestic rather than international, noted Katy Pearce, an assistant professor of communication at the University of Washington.

“Although the [TV-celebrity] Kardashian family posting ‘Pray for Armenia’ messages on social media may have increased some awareness, I doubt that it would have any lasting effect,” she said.

Robin Forestier-Walker is a freelance journalist based in Tbilisi.